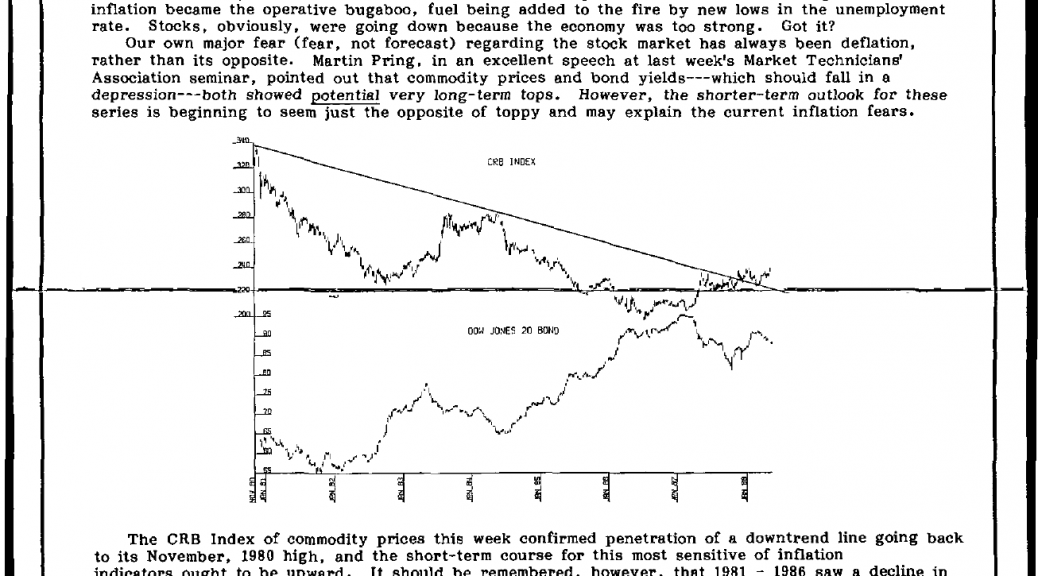 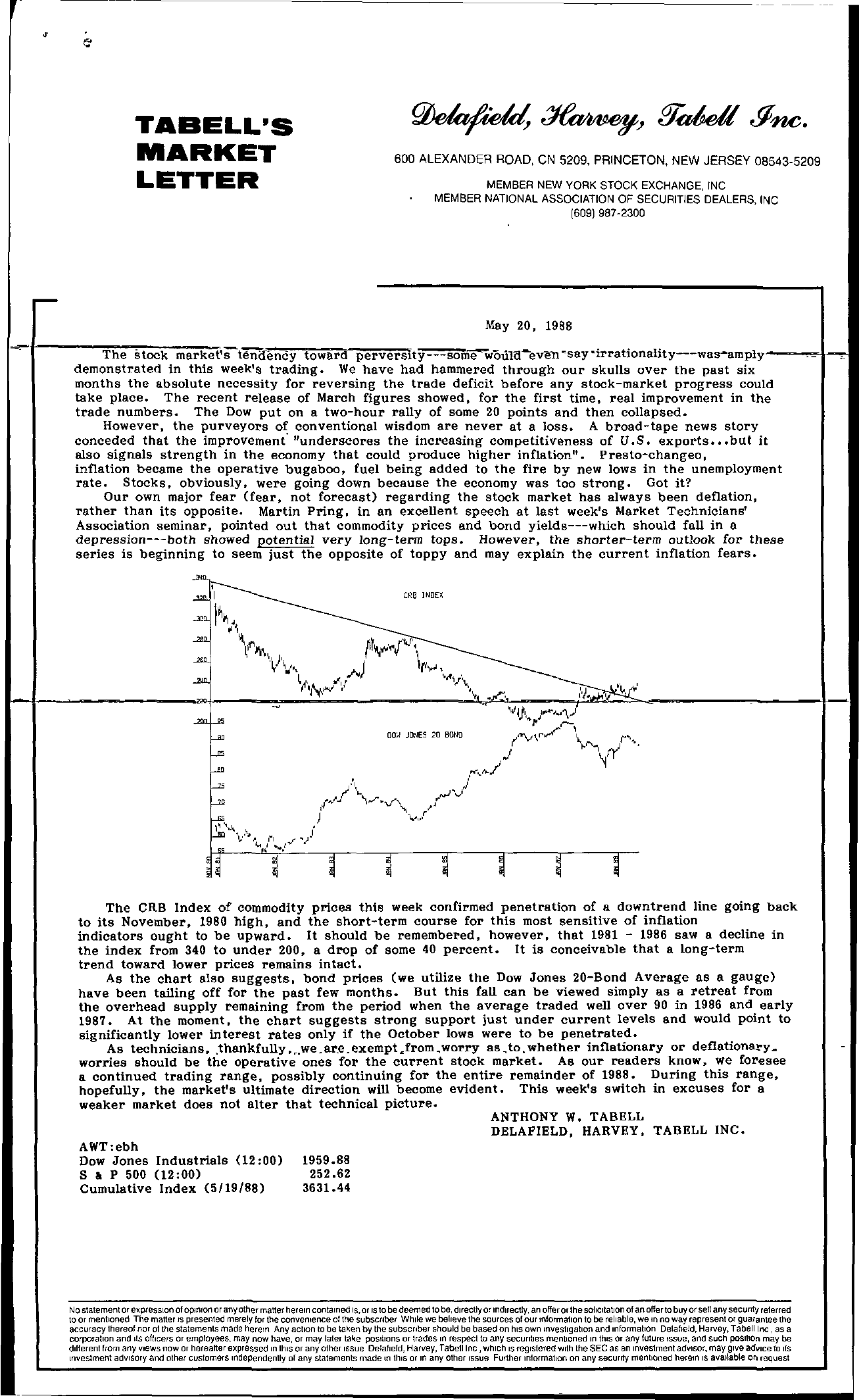 ——————————————————————————————————- TABELL'S MARKET LETTER 600 ALEXANDER ROAD, CN 5209, PRINCETON, NEW JERSEY 08543-5209 MEMBER NEW YORK STOCK EXCHANGE, INC MEMBER NATIONAL ASSOCIATION OF SECURITIES DEALERS, INC 1609) 987-2300 – May 20, 1988 The stock market's tendency toward perverslty—some W(nila—even'say-irrationality—was–amply—l- demonstrated in this week's trading. We have had hammered through our skulls over the past six months the absolute necessity for reversing the trade deficit before any stock-market progress could take place. The recent release of March figures showed, for the first time, real improvement in the trade numbers The Dow put on a two-hour rally of some 20 points and then collapsed However, the purveyors of conventional wisdom are never at a loss. A broad-tape news story conceded that the improvement' underscores the increasing competitiveness of U S. exports … but it also signals strength in the economy that could produce higher inflation Presto-changeo, inflation became the operative bugaboo, fuel being added to the fire by new lows in the unemployment rate. Stocks. obviously. were going down because the economy was too strong. Got it Our own major fear (fear, not forecast) regarding the stock market has always been deflation, rather than its opposite. Martin Pring. in an excellent speech at last week's Market Technicians' Association seminar, pointed out that commodity prices and bond yields—which should fall in a depression—both showed potential very long-term tops. However, the shorter-term outlook for these …series is beginning to seem just the opposite of toppy and may explain the current inflation fears. I ..l2!l. I -', I''., CRB INDEX -….. \'11\,VI'\/'- .rJInl.,..4'- '\ (I'yol , -2lIQ lV'''f,I''/'\l V\''t -/'- ( 't,. I The CRB Index of commodity prices this week confirmed penetration of a downtrend line going back to its November, 1980 high, and the short-term course for this most sensitive of inflation indicators ought to be upward. It should be remembered, however, that 1981 – 1986 saw a decline in the index from 340 to under 200, a drop of some 40 percent. It is conceivable that a long-term trend toward lower prices remains intact. As the chart also suggests, bond prices (we utilize the Dow Jones 20-Bond Average as a gauge) have been tailing off for the past few months. But this fall can be viewed simply as a retreat from the overhead supply remaining from the period when the average traded well over 90 in 1986 and early 1987. At the moment, the chart suggests strong support just under current levels and would point to significantly lower interest rates only if the October lows were to be penetrated. As technicians. ,thankfully. .we. ar.e. exempt ,from ..worry as to. whether inflationary or deflationary… worries should be the operative ones for the current stock market. As our readers know we foresee a continued trading range, possibly continuing for the entire remainder of 1988. During this range, hopefully, the market's Ultimate direction will become evident. This week's switch in excuses for a weaker market does not alter that technical picture. ANTHONY W. TAB ELL DELAFIELD, HARVEY, TAB ELL INC. AWTebh Dow Jones Industrials (1200) 1959.88 S P 500 (1200) 252.62 Cumulative Index (5/19/88) 3631.44 No statement or expressIon of opinion or any other matter herein contained IS, or IS to be deemed to be, directly or Indirectly, an offeror the soliCitation of an offer to buy orse!l any securrty referred to or mentioned The matter IS presented merely for the convemence of the subsctlber While we beheve the sources of our Information to be reliable, we m no way represent or guarantee the accuracy lhereof nor of the statements made herein Any action to be taken by the subscflber should be based on hiS own Investigation and Informallon Delafield, Harvey, Tabelllnc, as a corporation and ItS officers or emptoyees, may now have, or may later tak.e poSitions or trades In respect to any securities mentIoned In thIS or any future Issue, and such polllon may be dlHerent from any vIews now or hereafter expressed In thiS or any other Issue Delafield, Harvey, Tabefllnc ,WhiCh IS registered With the SEC as an Investment adVisor, may give adVice 10 Its Investment adVisory and other customers independently of any statements made In thiS or In any other Issue Further Informa\ton on any seCUrity menltoned herein IS available on request