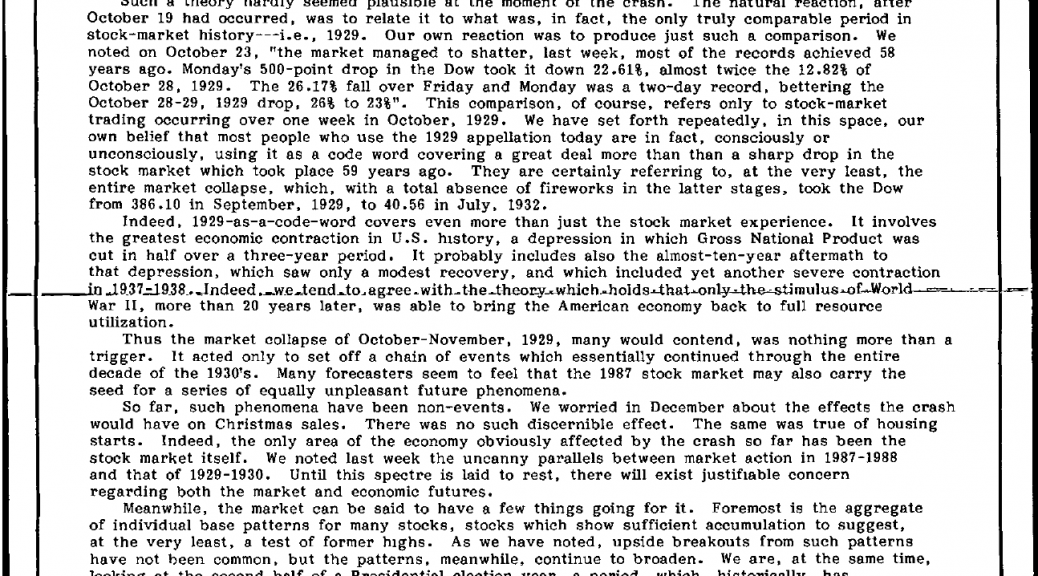 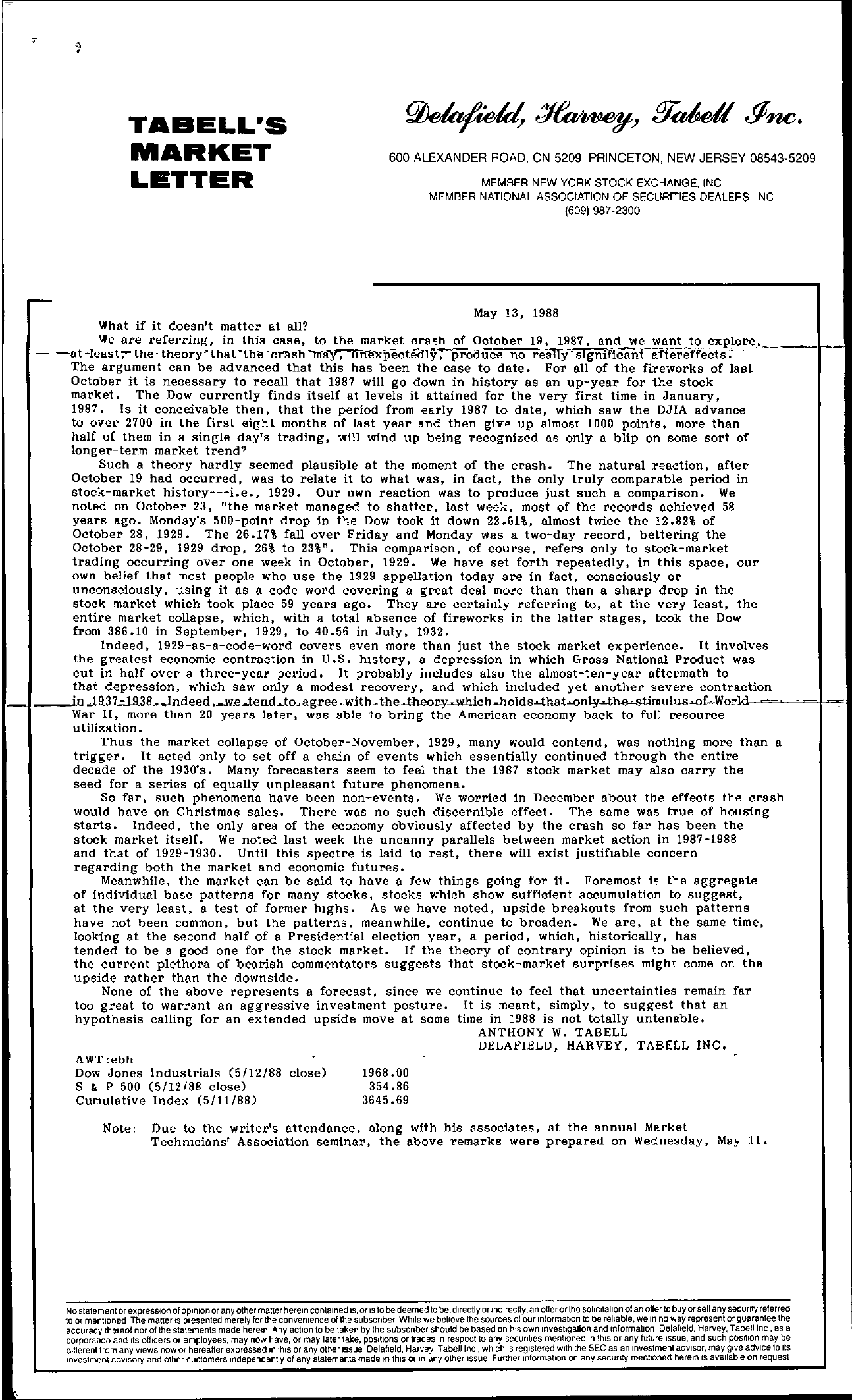 TABELL'S MARKET LETTER 600 ALEXANDER ROAD, CN 5209, PRINCETON, NEW JERSEY 08543-5209 MEMBER NEW YORK STOCK EXCHANGE, INC MEMBER NATIONAL ASSOCIATION OF SECURITIES DEALERS, INC 16091987-2300 May 13, 1988 What if it doesntt matter at all We are referring, in this case, to the market crash of October 19, 1987 J and we want to explore. -at -least;-the -theoryth-at–ttre- crash -may7lln-e-xpectecUy–proQuce no really- significant- aftereffects- .— — –……. – – The argument can be advanced that this has been the case to date. For all of the fireworks of last October it is necessary to recall that 1987 will go down in history 8S an up-year for the stock market. The Dow currently finds itself at levels it attained for the very first time in January. 1987. Is it conceivable then, that the period from early 1987 to date, which saw the DJIA advance to over 2700 in the first eight months of last year and then give up almost 1000 points, more than half of them in a single day's trading. will wind up being recognized as only a blip on some sort of longer-term market trend Such a theory hardly seemed plausible at the moment of the crash. The natural reaction. after October 19 had occurred. was to relate it to what was. in fact. the only truly comparable period in stock-market history—i.e 1929. Our own reaction was to produce just such a comparison. We noted on October 23. the market managed to shatter. last week, most of the records achieved 58 years ago. Monday's 500-point drop in the Dow took it down 22.61, almost twice the 12.82 of October 28, 1929 The 26.17 fall over Friday and Monday was a two-day record, bettering the October 28-29, 1929 drop, 26 to 23 This comparison, of course, refers only to stock-market trading occurring over one week in October, 1929. We have set forth repeatedly, in this space. our own belief that most people who use the 1929 appellation today are in fact. consciously or unconsciously. using it as a code word covering a great deal more than than a sharp drop in the stock market which took place 59 years ago. They are certainly referring to, at the very least. the entire market collapse. which. with a total absence of fireworks in the latter stages. took the Dow from 386.10 in September, 1929, to 40.56 in July, 1932. Indeed. 1929-as-a-code-word covers even more than just the stock market experience. It involves the greatest economic contraction in U.S. hlstory, a depression in which Gross National Product was cut in half over a three-year period. It probably includes also the almost-ten-year aftermath to that depression, which saw only a modest recovery. and which included yet another severe contraction 1–lI–jn .lR37.olR38.lndeed ,wetendto a gl'ee. with thetheo,,-y–whic hhold s…thatonly4hti mulus,.f-World–'-I War II. more than 20 years later, was able to bring the American economy back to full resource utilization. Thus the market collapse of October-November, 1929, many would contend. was nothing more than a trigger. It acted only to set off a chain of events which essentially continued through the entire decade of the 1930's. Many forecasters seem to feel that the 1987 stock market may also carry the seed for a series of equally unpleasant future phenomena. So far, such phenomena have been non-events. We worried in December about the effects the crash would have on Christmas sales. There was no such discernible effect. The same was true of housing starts. Indeed, the only area of the economy obviously affected by the crash so far has been the stock market itself. We noted last week the uncanny parallels between market action in 1987 -1988 and that of 1929-1930. Until this spectre is laid to rest. there will exist justiflable concern regarding both the market and economic futures. Meanwhile. the market can be said to have a few things going for it. Foremost is the aggregate of individual base patterns for many stocks, stocks which show sufficient accumulation to suggest, at the very least. a test of former hIghs. As we have noted. upside breakouts from such patterns have not been common. but the patterns. meanwhile. continue to broaden. We are, at the same time. looking at the second half of a Presidential election year. a period. which, historically, has tended to be a good one for the stock market. If the theory of contrary opinion is to be believed. the current plethora of bearish commentators suggests that stock-market surprises might come on the upside rather than the downside. None of the above represents a forecast. since we continue to feel that uncertainties remain far too great to warrant an aggressive investment posture. It is meant. simply. to suggest that an hypothesis calling for an extended upside move at some time in 1988 is not totally untenable. ANTHONY W TABELL DELAFIELD, HARVEY, TABELL INC. AWTebh Dow Jones Industrials (5112188 close) 1968.00 S & P 500 (5112188 close) 354.86 Cumulative Index (5111188) 3645.69 Note Due to the writer's attendance. along with his associates. at the annual Market Techmcians' Association seminar, the above remarks were prepared on Wednesday. May 11. No statement or expreSSion of opInion or any other matter herein contained IS, or IS to be deemed to be, directly or indirectly, an offeror the solicrtatlon of an offerlo buy or sell any security relerred to or mentioned The matter IS presented merely for the convenience of the subscnber While we believe the sources of our Informabon to be reliabte, we in no way represent or guarantee the accuracy thereof nor of the statements made herein Any actIOn to be taken by the subscnber should be based on hiS own Investlgatton and Information Delafield, Harvey, Tabel1 Inc, as a corporation and Its officers or employees, may now have, or may later take, pOSltlons or trades In respect to any seCUrities mentioned In thiS or any future Issue, and such position may be different from any views now or hereaffer expressed in thiS or any other Issue Delafield, Harvey, TabeJi Inc , which IS registered With the SEC as an investment adVisor, may 91ve adVice 10 Its investment adVISOry and other customers independently of any statements made In thiS or in any other Issue Further InformatIOn on any secunty mentioned herein IS available on request \