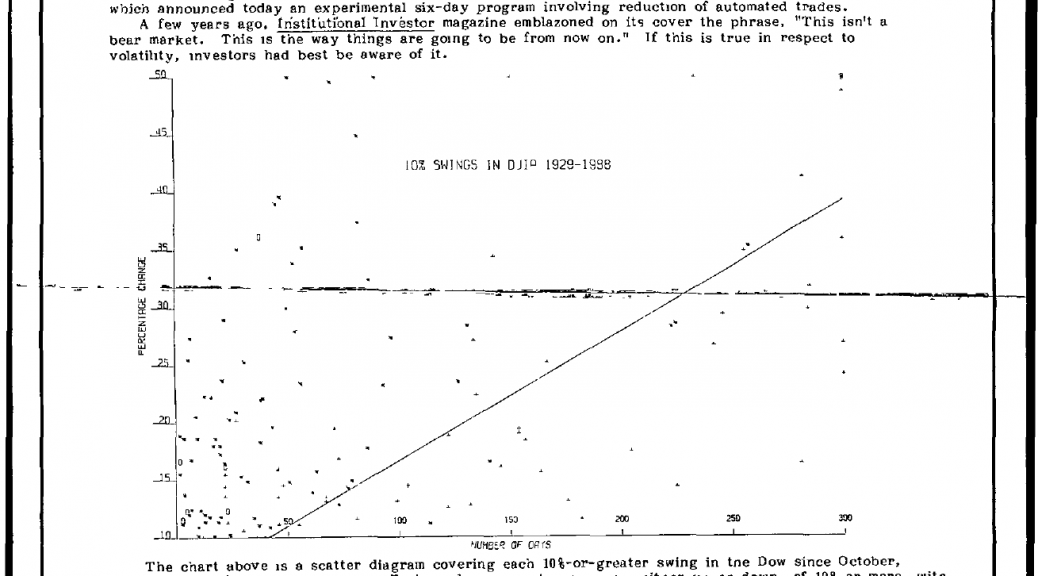 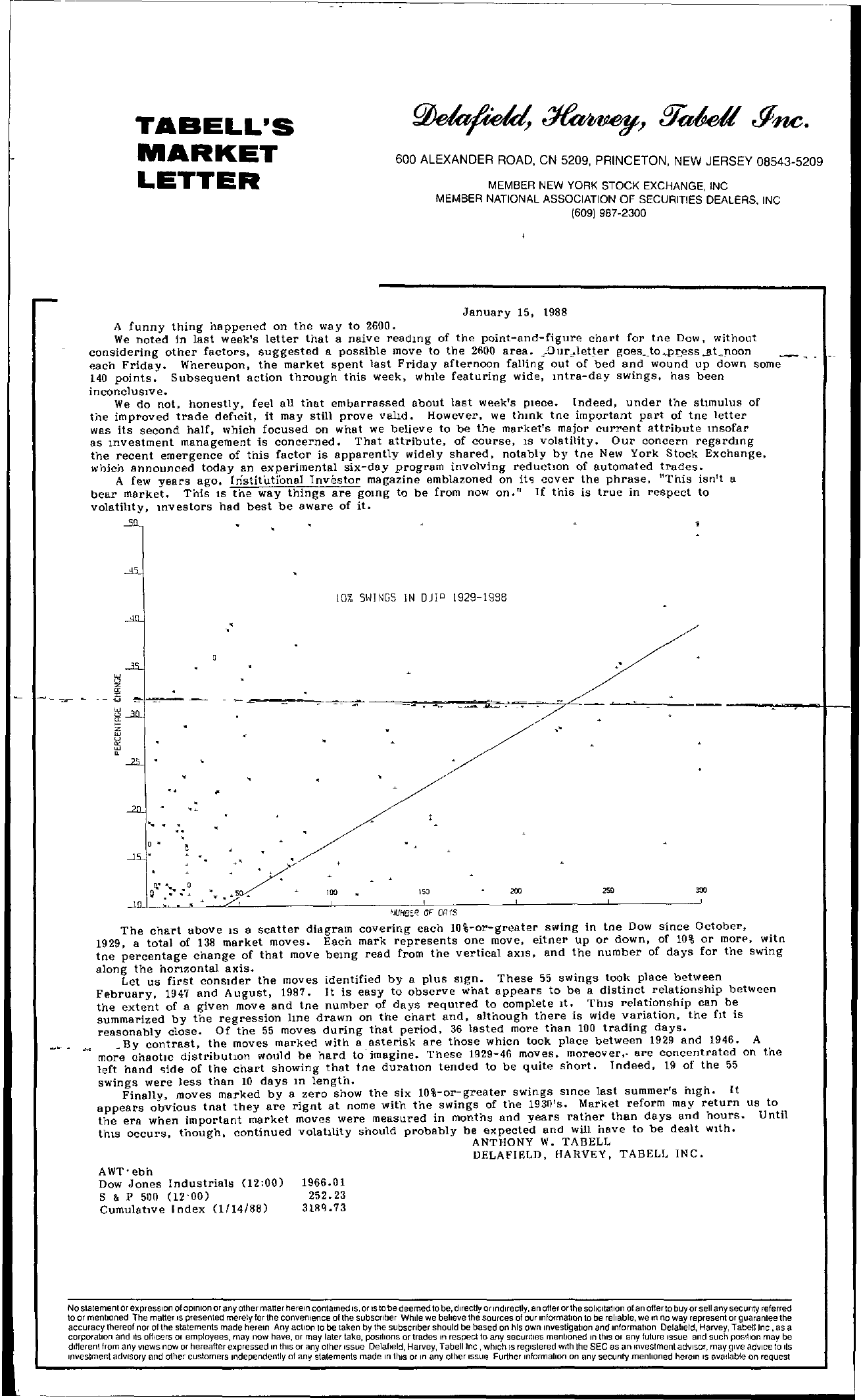 – – — – – – – – – – – – – – – – – – – – – – – – – – – – – – – – – – – ——————-7———————————————————————————————— TABELL'S MARKET LETTER 600 ALEXANDER ROAD, eN 5209, PRINCETON, NEW JERSEY 08543-5209 MEMBER NEW YORK STOCK EXCHANGE, INC MEMBER NATIONAL ASSOCIATION OF SECURITIES DEALERS, INC (609) 987-2300 January 15. 1988 A funny thing happened on the way to 2600. We noted in last week's letter that a naive readmg of the point-and-figure chart for tne Dow, without considering other factors. suggested a possible move to the 2600 area. -T-Dur,,letter goesJo….pess.Jltnoon each Friday. Whereupon, the market spent last Friday afternoon falling out of bed and wound up down some 140 points. Subsequent action through this week. whIle featUring wide, mtra-day sWings. has been inconclusIVe. We do not. honestly. feel all that embarrassed about last week's pIece. Indeed. under the stImulus of the improved trade defIcit, it may still prove vahd. However, we thmk toe important part of tne letter was its second half, which focused on what we believe to be the market's major current attribute msofar as Investment management is concerned. That attribute, of course, IS volatility. Our concern regardlOg the recent emergence of this factor is apparently widely shared, notably by tne New York Stock Exchange, which announced today an experimental six-day program involving reductIon of automated trades. A few years ago. tristit'uti'onal lnvestor magazine emblazoned on it'3 cover the phrase. This isn't a bear market. This 18 the way things are go1Og to be from now on. 1I If this is true in respect to . .volatihty. mvestors had best be aware of it. , 10 5'ING5 IN OJlo 1929-1938 ..li – 'Ie .–'—- . … . .. . . . . ….,. . . . . – . H' ' 200 'IUHgt OF ORfS '50 The chart above IS a scatter diagram covering each 10-or-greater swing in toe Dow since October, 1929, a total of 138 market moves. Each mark represents one move, eitner up or down, of 10 or morp. witn toe percentage change of that move bemg read from the vertical aXIS, and the number of days for the swing along the horIzontal axis. Let us first conSIder the moves identified by a plus SIgn. These 55 SWings took place between February. 1947 and August, 1987. It is easy to observe what appears to be a distinct relationship between the extent of a given move and tne number of days reqUIred to complete It. ThIS relationship can be summaT'ized by the regression lme drawn on the chart and, although there is wide variation, the fIt is reasonably close. Of the 55 moves during that period. 36 lasted more than 100 trading days. By contrast, the moves marked with a asterisk are those whicn took place between 1929 and 1946. A more chaotIc distributIon would be hard to imagine. These 1929-46 moves. moreover.- are concentrated on the left hand 'ide of the chart showing that tne duratIon tended to be quite short. Indeed. 19 of the 55 swings were less than 10 days 10 length. Finally. moves marked by a zero show the six 10-or-greater swings SInce last summer's hIgh. It appears obvious tnat they are rignt at nome with the swings of the 1930's. Market reform may return us to the era when important market moves were measured in months and years rather than days and hours. Until thIS occurs, though. continued volatIlity should probably be expected and will have to be dealt WIth. ANTHONY W. TABELL DELAFIELD, HARVEY, TABELL INC. AWT'ebh Dow Jones Industrials (1200) S P 500 (12'00) CumulatIve Index 0/14/88) 1966.01 252.23 31Rq 73 No statement or expression 01 Opinion or any other maner herem contaIned IS, or IS to be deemedto be, directly or Indirectly, an offer orthe solicltallon of an offer to buy or sell any secunty referred to or mentIOned The matter IS presented merely for the convenience of the subSCriber While we believe Ihe sources of our mlormatlon to be rehable, we ,n no way represent or guarantee the accuracy thereof nor 01 the statements made herein Any action to be taken by the subSCriber should be based on his own Investlgallon and mformallon Delafield, Harvey, Tabe!! Inc, as a corporation and I\S officers or employees, may now have, or may later take, positions or trades In respect to any secuntles mentioned In thiS or any luture Issue and such position may be different from any views now or hereafter expressed In thiS or any other Issue Delafield, Harvey, Tabelllnc , whlch!s registered wl1h Ihe SEC as an mvestment adVisor, may give adVice 10 liS Investment adVISOry and other customers Independently of any statements made In thiS or In any other Issue Further in/ormation on any secUfity mentioned herein IS available on request