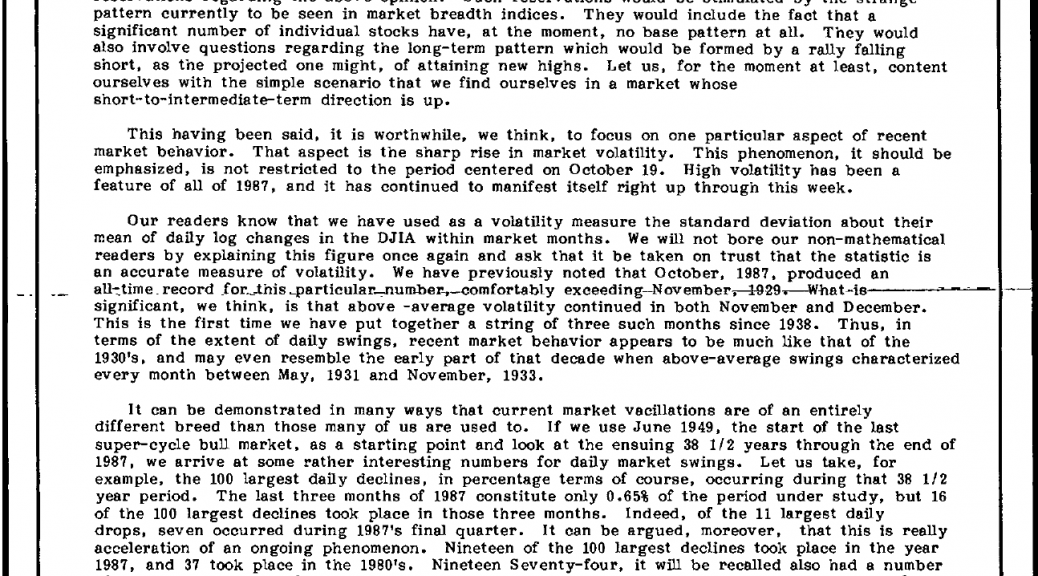 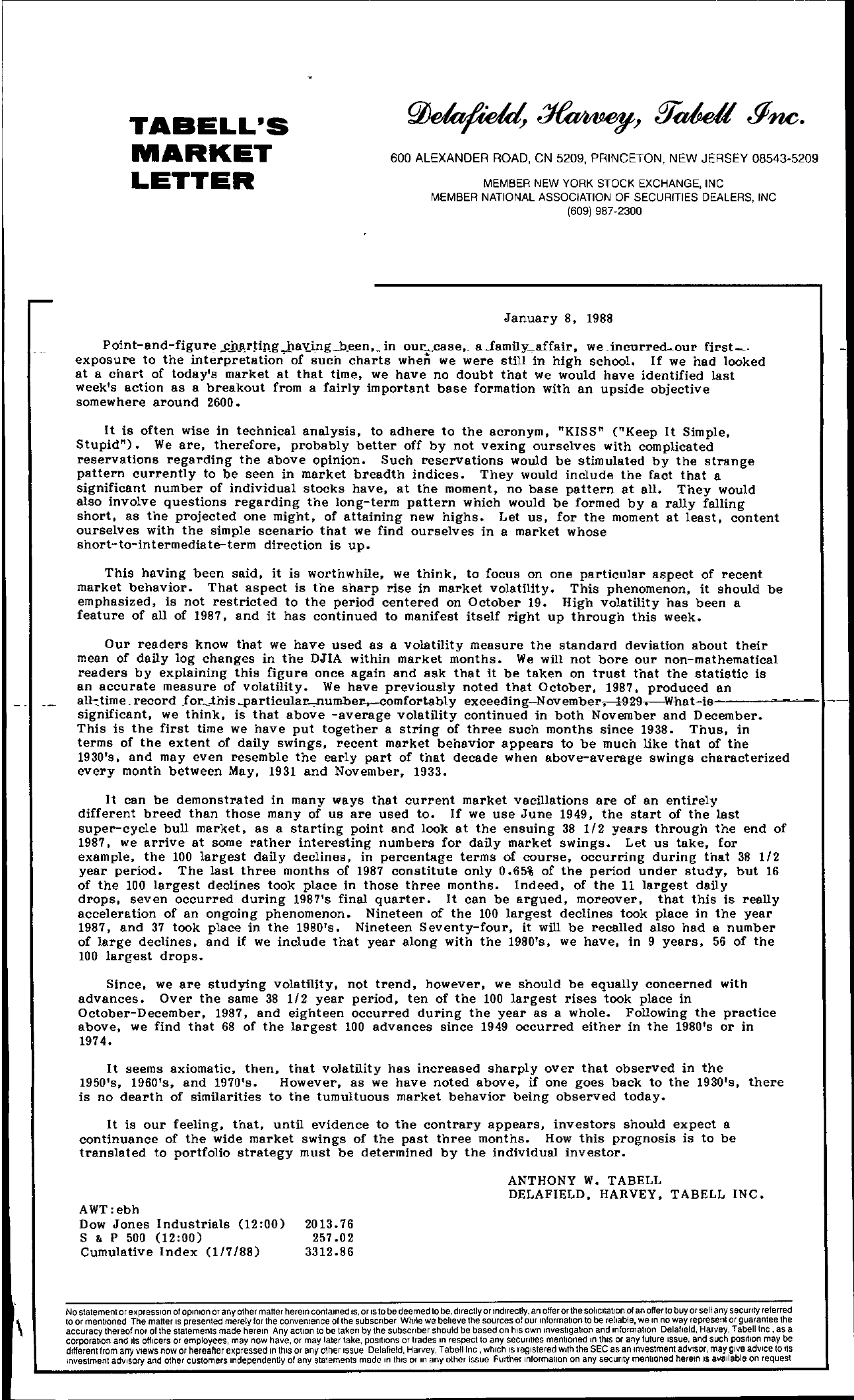 ,——————————————————————————————————————– TABELL'S MARKET LETTER 600 ALEXANDER ROAD, CN 5209, PRINCETON, NEW JERSEY 08543-5209 MEMBER NEW YORK STOCK EXCHANGE, INC MEMBER NATIONAL ASSOCIATION OF SECURITIES DEALERS, INC (609) 987-2300 January 8, 1988 Point-8nd-figur c..b.!lring .J)8\!.ingb.een, in our-..case. a .1amUyaffair. we .incurred-,,-our first exposure to the interpretation- of such charts when we were still in high school. If we had looked at a chart of today's market at that time, we have no doubt that we would have identified last week's action as 8 breakout from a fairly important base formation with an upside objective somewhere around 2600. It is often wise in technical analysis, to adhere to the acronym, KISS (Keep It Simple. Stupid). We are, therefore, probably better off by not vexing ourselves with complicated reservations regarding the above opinion. Such reservations would be stimulated by the strange pattern currently to be seen in market breadth indices They would include the fact that a significant number of individual stocks have, at the moment, no base pattern at all. They would also involve questions regarding the long-term pattern which would be formed by a rally falling short, as the projected one might, of attaining new highs. Let us, for the moment at least, content ourselves with the simple scenario that we find ourselves in a market whose short-to-intermediate-term direction is up. This having been said, it is worthwhile, we think. to focus on one particular aspect of recent market behavior That aspect is the sharp rise in market volatility. This phenomenon, it should be emphaSized, is not restricted to the period centered on October 19. High volatility has been a feature of all of 1987, and it has continued to manifest itself right up through this week. Our readers know that we have used as a volatility measure the standard deviation about their mean of daily log changes in the DJ1A within market months. We will not bore our non-mathematical readers by explaining this figure once again and ask that it be taken on trust that the statistic is an accurate measure of volatility. We have previously noted that October, 1987, produced an alltim e record J orthis particular-numbe,comfortably exceed in g-N ov ember.-1-929W-hn t-is——I significant, we think. is that above -average volatility continued in both November and December. This is the first time we have put together a string of three such months since 1938. Thus, in terms of the extent of daily swings, recent market behavior appears to be much like that of the 1930's, and may even resemble the early part of that decade when above-average swings characterized every month between May, 1931 and November, 1933. It can be demonstrated in many ways that current market vacillations are of an entirely different breed than those many of us are used to. If we use June 1949, the start of the last super-cycle bull market, as a starting point and look at the ensuing 38 112 years through the end of 1987, we arrive at some rather interesting numbers for daily market swings. Let us take, for example, the 100 largest daily declines, in percentage terms of course, occurring during that 38 1/2 year period. The last three months of 1987 constitute only 0.65 of the period under study, but 16 of the 100 largest declines took place in those three months. Indeed, of the 11 largest daily drops, seven occurred during 1987's final quarter. It can be argued, moreover. that this is really acceleration of an ongoing phenomenon. Nineteen of the 100 largest declines took place in the year 1987, and 37 took place in the 1980's. Nineteen Seventy-four, it will be recalled also had a number of large declines, and if we include that year along with the 1980's, we have, in 9 years, 56 of the 100 largest drops Since, we are stUdying volatility, not trend, however, we should be equally concerned with advances. Over the same 38 1/2 year period, ten of the 100 largest rises took place in October-December, 1987, and eighteen occurred during the year as a whole. Following the practice above, we find that 68 of the largest 100 advances since 1949 occurred either in the 1980s or in 1974. It seems axiomatic, then, that volatility has increased sharply over that observed in the 1950's, 1960's, and 1970's. However, as we have noted above, if one goes back to the 1930's, there is no dearth of similarities to the tumultuous market behavior being observed today. It is our feeling, that, until evidence to the contrary appears, investors should expect a continuance of the wide market swings of the past three months. How this prognosis is to be translated to portfolio strategy must be determined by the individual investor. AWTebh Dow Jones Industrials (12 00) S & P 500 (1200) Cumulative Index (1/7/88) 201376 257.02 3312.86 ANTHONY W. TABELL DELAFIELD, HARVEY, TABELL INC. No statement or eKpreSSlon or opinIOn or any other matter herein contained IS, or IS 10 be deemed to be, dlreclly or Indlreclly, an oHer orthe soIlcltalron of an offer to buy or sell any security referred \ to or mentIOned The matter IS presented merely for the convemence of the subSCriber While we beheve the sources of our Information to be reliable, we In no way represent or guarantee the accuracy thereof nor of the statements made herein Any action to be taken by the subscnber should be based on hiS own investigation and Information Delafield, Harvey, Tabelllnc, as a corporation and lis officers or employees, may now have, or may later take, posrtlons or trades In respect 10 any secuTitles menlroned In thiS or any future ISsue, and such posllion may be different from any views now or hereafter expressed In thiS or any other Issue Delafield, Harvey, Tabellinc , which IS registered With the SEC as an Investment adVisor, may give adVice to tts Investment adVISOry and other customers Independently of any statements made In thiS Of In any other Issue Further Informallon on any secUTIty mentioned heretn IS available on request