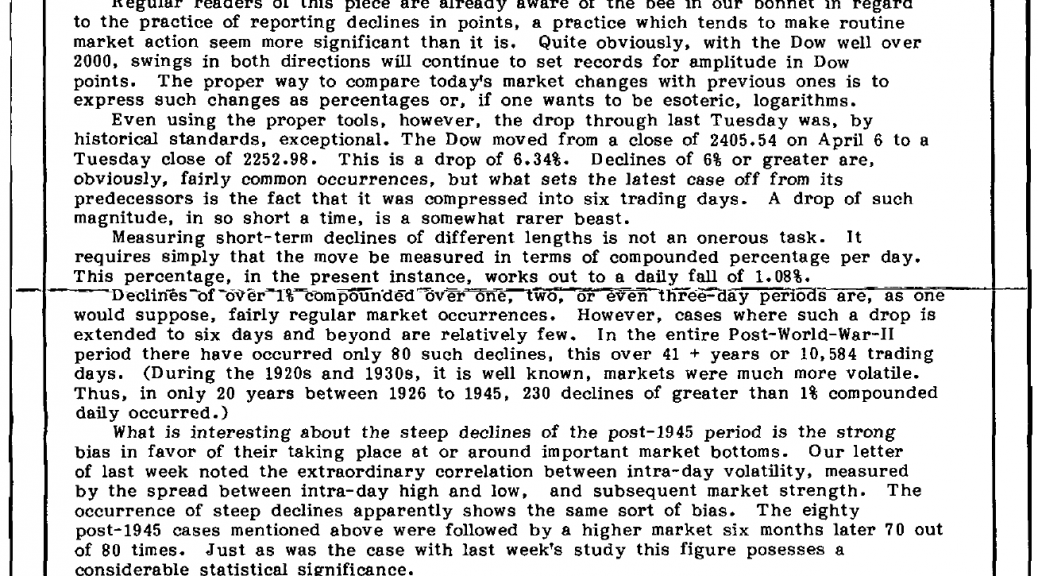 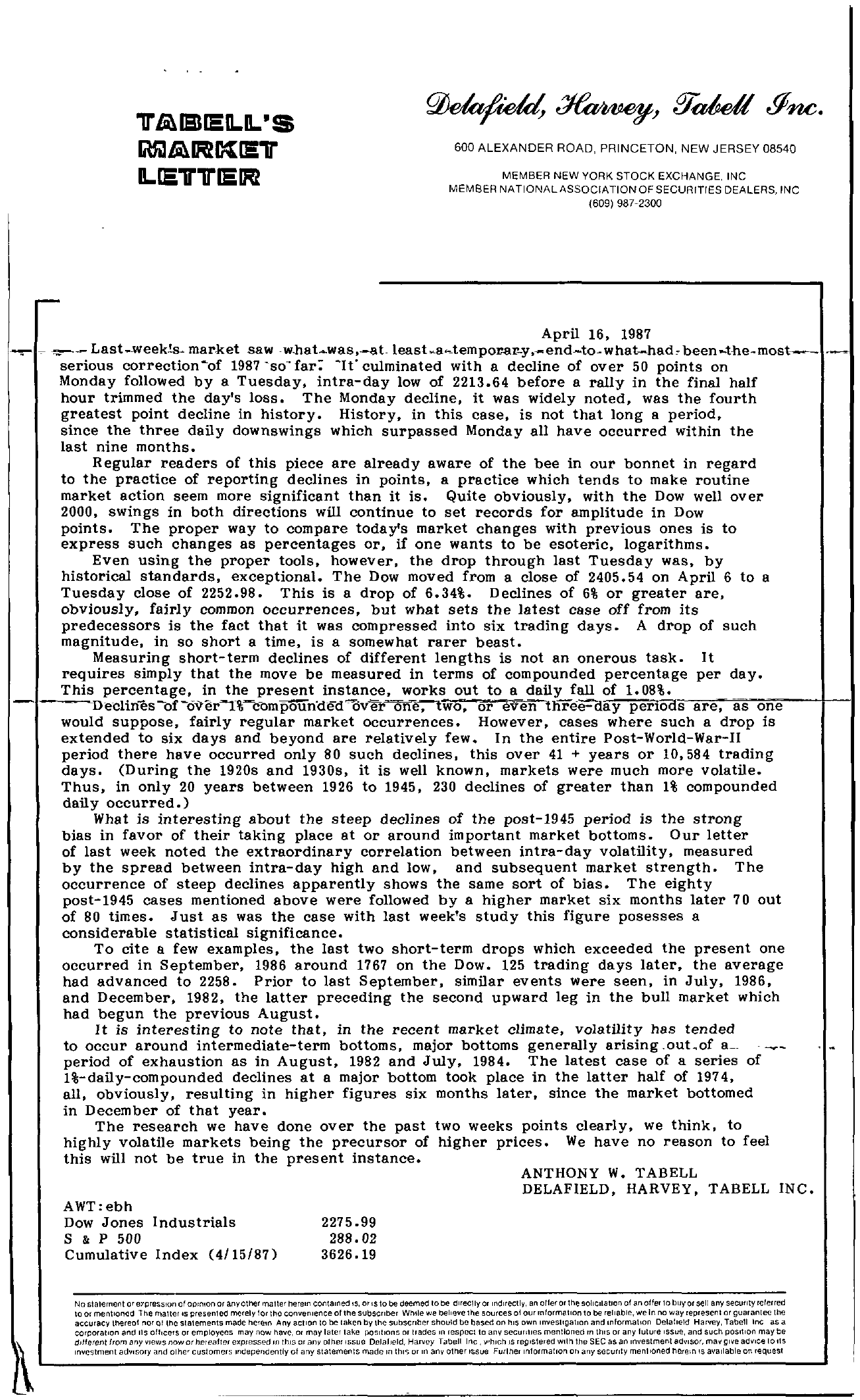 11&\ ISUELL S Ia1lI 1RlEII LEIIII1E1Rl 600 ALEXANDER ROAD, PRINCETON, NEW JERSEY 08540 MEMBER NEW YORK STOCK EXCHANGE, INC MEMBER NATIONAL ASSOCIATION OF SECURITIES DEALERS, INC (609) 987-2300 April 16, 1987 -.- – Last .week!s. mar.ket saw .w.hat-was,-at-leasta-tempor-ar-y,-end-to-what-had. been-t-he-most . serious correctionof 1987 -so' far -It' culminated with a decline of over 50 points on Monday followed by a Tuesday, intra-day low of 2213.64 before a rally in the final half hour trimmed the day's loss. The Monday decline, it was widely noted, was the fourth greatest point decline in history. History, in this case, is not that long a period, since the three daily downswings which surpassed Monday all have occurred within the last nine months. Regular readers of this piece are already aware of the bee in our bonnet in regard to the practice of reporting declines in points, a practice which tends to make routine market action seem more significant than it is. Quite obviously, with the Dow well over 2000, swings in both directions will continue to set records for amplitude in Dow points. The proper way to compare today's market changes with previous ones is to express such changes as percentages or, if one wants to be esoteric, logarithms. Even using the proper tools, however, the drop through last Tuesday was, by historical standards, exceptional. The Dow moved from a close of 2405.54 on April 6 to a Tuesday close of 2252.98. This is a drop of 6.34. Declines of 6 or greater are, obviously, fairly common occurrences, but what sets the latest case off from its predecessors is the fact that it was compressed into six trading days. A drop of such magnitude, in so short a time, is a somewhat rarer beast. Measuring short-term declines of different lengths is not an onerous task. It requires simply that the move be measured in terms of compounded percentage per day. This percentage, in the present instance, works out to a daily fall of 1.08. Declines of -6verlcom pounded QVeronetwo, or even tnree-day perloo'''sC–a-r''e',-'''a'''s'-''o'''n''eo—I–1 would suppose, fairly regular market occurrences. However, cases where such a drop is extended to six days and beyond are relatively few. In the entire Post-World-War-IJ period there have occurred only 80 such declines, this over 41 years or 10,584 trading days. (During the 1920s and 1930s, it is well known, markets were much more volatile. Thus, in only 20 years between 1926 to 1945, 230 declines of greater than 1 compounded daily occurred.) What is interesting about the steep declines of the post-1945 period is the strong bias in favor of their taking place at or around important market bottoms. Our letter of last week noted the extraordinary correlation between intra-day volatility, measured by the spread between intra-day high and low, and subsequent market strength. The occurrence of steep declines apparently shows the same sort of bias. The eighty post-1945 cases mentioned above were followed by a higher market six months later 70 out of 80 times. Just as was the case with last week's study this figure posesses a considerable statistical significance. To cite a few examples, the last two short-term drops which exceeded the present one occurred in September, 1986 around 1767 on the Dow. 125 trading days later, the average had advanced to 2258. Prior to last September, similar events were seen, in July, 1986, and December, 1982, the latter preceding the second upward leg in the bull market which had begun the previous August. It is interesting to note that, in the recent market climate, volatility has tended to occur around intermediate-term bottoms, major bottoms generally arising .0uLof a. ' period of exhaustion as in August, 1982 and July, 1984. The latest case of a series of 1-daily-compounded declines at a major bottom took place in the latter half of 1974, all, obviously, resulting in higher figures six months later, since the market bottomed in December of that year. The research we have done over the past two weeks points clearly, we think, to highly volatile markets being the precursor of higher prices. We have no reason to feel this will not be true in the present instance. ANTHONY W. TABELL DELAFIELD, HARVEY, TAB ELL INC. AWTebh Dow Jones Industrials 2275.99 S 8 P 500 Cumulative Index (4/15/87) 288.02 3626.19 No statement or epresslon of opinion or any other malter herem contamed IS, or IS 10 be deemed to be dlrec1lyor indirectly, an oller or the soliCitation of an olter 10 buy or sell any secullty referred to or mentioned The malter IS presented merely for the convenience of the SubSCriber While we beheyethe sourcesot our informatiOn to be reliable, we in no way represent or guarantee the accuracy thereof nor Of the statements made herein Any action to be taken by the subSCriber Should be based on hiS own InveS1!gallon and Intorma\!on Delafletd Harvey, Tabetl Inc as a corporal Ion and Its olltcers or employet'ls may now have, or may later take positions or trades In respect to any SCCUfilies mentioned rn thiS or any future ISSue, and such position may be d,l/emnl from any Ylews now or heleaftor expressed In thiS or any other Issue Dela/leld, Harvey Tabelt Inc, y'hlch IS registered With the SEC as an Investmenl adVisor, ma give adVice tOltS InYestment adVisory and othe' customers Indepelldently 01 any statements made In thl; or In any other Issue Furlher information 011 any securtly mentioned herem IS available on request