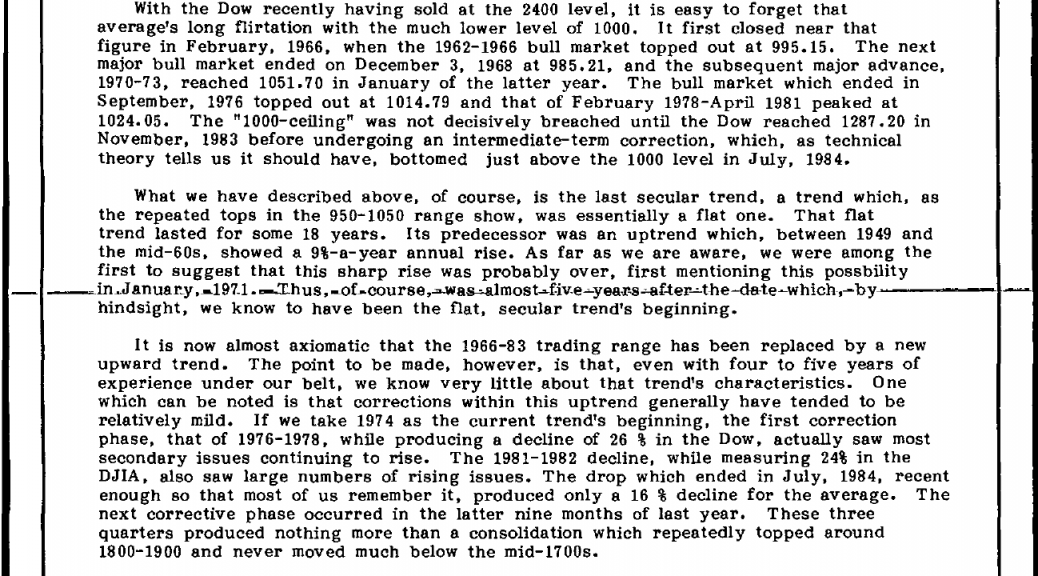 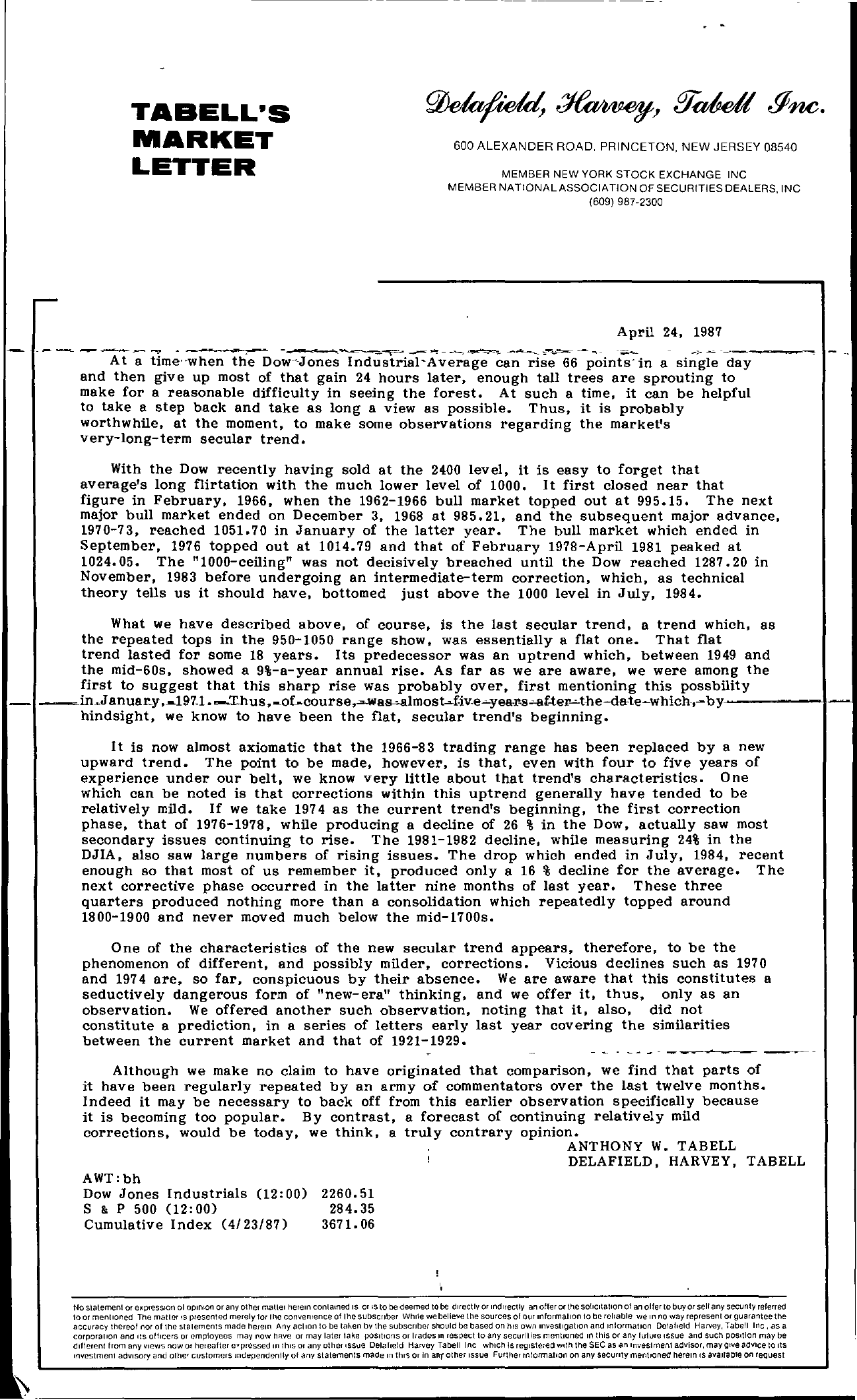 TABELL'S MARKET LETTER —.– .. 600 ALEXANDER ROAD. PRINCETON, NEW JERSEY 08540 MEMBER NEW YORK STOCK EXCHANGE INC MEMBER NATIONAL ASSOCIATION OF SECURITIES DEALERS, INC (609) 987-2300 April 24, 1987 – – – . – – – '' — l -.—-., -' ..-.,….,,- …..-.. At a time'when the DowJones Industrial-Average can rise 66 points'in a single day and then give up most of that gain 24 hours later, enough tall trees are sprouting to make for a reasonable difficulty in seeing the forest. At such a time, it can be helpful to take a step back and take as long a view as possible. Thus, it is probably worthWhile, at the moment, to make some observations regarding the market's very-long-term secular trend. With the Dow recently having sold at the 2400 level, it is easy to forget that average's long flirtation with the much lower level of 1000. It first closed near that figure in February, 1966, when the 1962-1966 bull market topped out at 995.15. The next major bull market ended on December 3, 1968 at 985.21, and the subsequent major advance, 1970-73, reached 1051.70 in January of the latter year. The bull market which ended in September, 1976 topped out at 1014.79 and that of February 1978-April 1981 peaked at 1024.05. The 1000-ceiling was not decisively breached until the Dow reached 1287.20 in November, 1983 before undergoing an intermediate-term correction, which, as technical theory tells us it should have, bottomed just above the 1000 level in July, 1984. What we have described above, of course, is the last secular trend, a trend which, as the repeated tops in the 950-1050 range show, was essentially a flat one. That flat trend lasted for some 18 years. Its predecessor was an uptrend which, between 1949 and the mid-60s, showed a 9-a-year annual rise. As far as we are aware, we were among the first to suggest that this sharp rise was probably over, first mentioning this possbility I – – I – – – . m;'.d.r anuar.y ,191-l. -T.hus, ofcourse,waS-oalmost,.f.iv.eyea.r-s.o.af-terthe-datewhich,-bb.y —–II-I hindsight, we know to have been the flat, secular trend's beginning. It is now almost axiomatic that the 1966-83 trading range has been replaced by a new upward trend. The point to be made, however, is that, even with four to five years of experience under our belt, we know very little about that trend's characteristics. One which can be noted is that corrections within this uptrend generally have tended to be relatively mild. If we take 1974 as the current trend's beginning, the first correction phase, that of 1976-1978, while producing a decline of 26 in the Dow, actually saw most secondary issues continuing to rise. The 1981-1982 decline, while measuring 24 in the DJIA, also saw large numbers of rising issues. The drop which ended in July, 1984, recent enough so that most of us remember it, produced only a 16 decline for the average. The next corrective phase occurred in the latter nine months of last year. These three quarters produced nothing more than a consolidation which repeatedly topped around 1800-1900 and never moved much below the mid-1700s. One of the characteristics of the new secular trend appears, therefore, to be the phenomenon of different, and possibly milder, corrections. Vicious declines such as 1970 and 1974 are, so far, conspicuous by their absence. We are aware that this constitutes a seductively dangerous form of new-era thinking, and we offer it, thus, only as an observation. We offered another such observation, noting that it, also, did not constitute a prediction, in a series of letters early last year covering the similarities between the current market and that of 1921-1929. Although we make no claim to have originated that comparison, we find that parts of it have been regularly repeated by an army of commentators over the last twelve months. Indeed it may be necessary to back off from this earlier observation specifically because it is becoming too popular. By contrast, a forecast of continuing relatively mild corrections, would be today, we think, a truly contrary opinion. ANTHONY W. TABELL DELAFIELD, HARVEY, TABELL AWTbh Dow Jones Industrials (12 00) 2260.51 S & P 500 (1200) 284.35 Cumulative Index (4/23/87) 3671. 06 No statement or cpfeSS\on 01 opinion or any olher matter herem contamed IS or IS 10 be deemed 10 be direct Iv or indirectly an ofter or Ihc soliCitation at an oller \0 buy or sel! any security referred 10 or mentioned The mattf!r IS presented merely lor thc convenience of Ihc subSCriber While we believe Ihe sources of our information 10 be reliable we In no way represent or guarantee the accuracy theroof nor of the statements made herein Any acllon to be tafen bv the subscrlbar should be based on hiS own Investlgallon and information Delafield HaNey, Tabell Inc, as a corporal Ion and Its ottlcers or employees may now hHve or may later take poSitions or Irades In respect to any securities mentioned In this or any future Issue and such pOSition may be different from any views nowor hCleafler epressed In this or any other Issue Delafield HaNey Tabell Inc which is registered wllh the SEC as an Investment advisor, may gIVe adVice to Its Investment adVisory and othe' customers mdependenHy of any statements made m thl'; or in any other Issue Fuflher mformatlon on any security mentioned herem IS available on reQuest