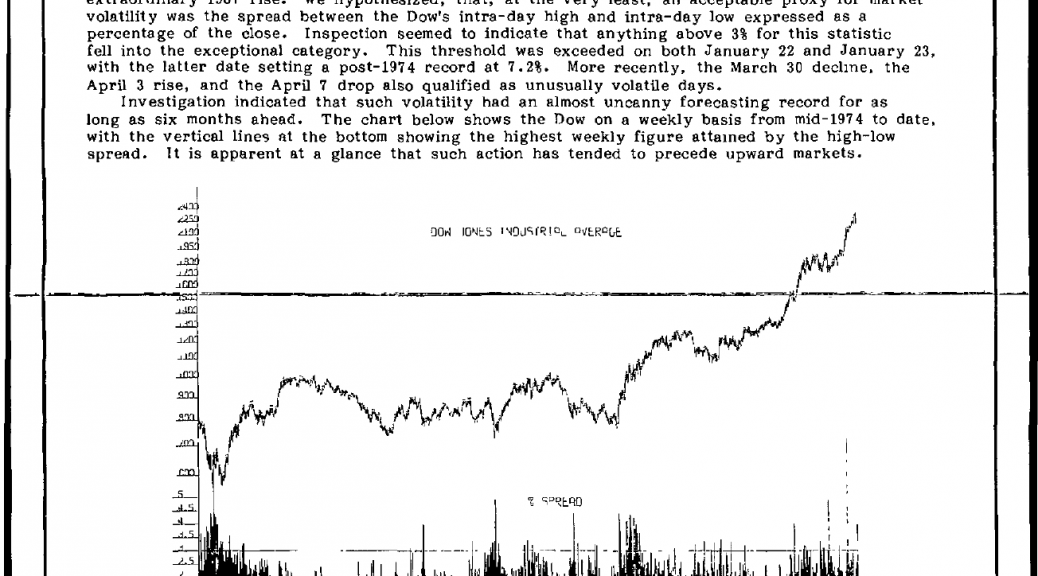 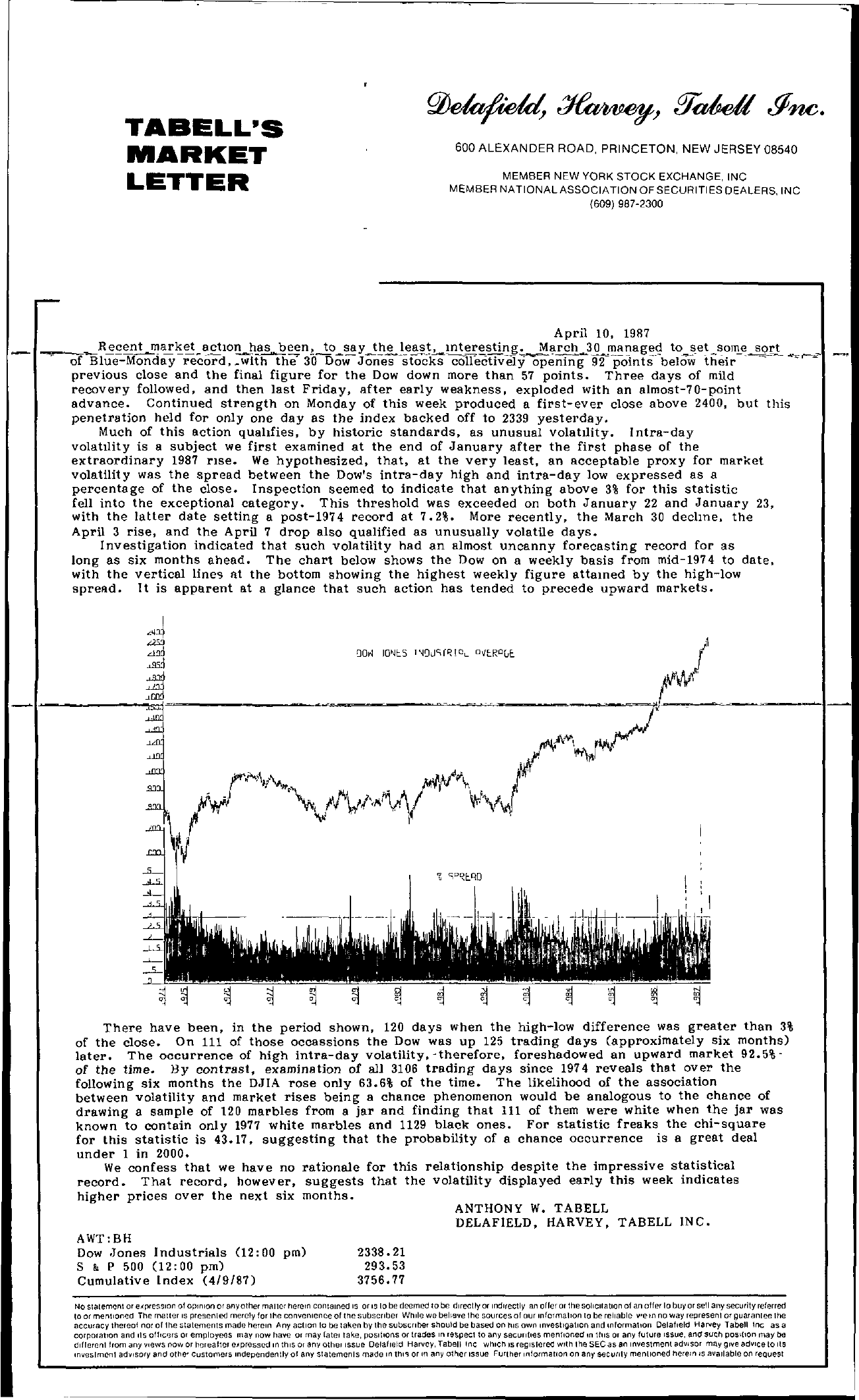 TABELL'S MARKET LETTER 600 ALEXANDER ROAD, PRINCETON, NEW JERSEY 08540 MEMBER NEW YORK STOCK EXCHANGE, INC MEMBER NATIONAL ASSOCIATION OF SECURITIES DEALERS, INC (609) 987-2300 April 10, 1987 -.–.-Rn !lo'!-9en!.-!.oy-.J.!t e!ntstircl.!.3JL.–,mA.ag5 t02-e om 9l't …….. of Blue-Monday record, with the 30 Dow Jones stocks collectively opening 92 points below their ' previous close and the final figure for the Dow down more than 57 points. Three days of mild recovery followed, and then last Friday, after early weakness, exploded with an almost-70-point advance. Continued strength on Monday of this week produced a first-ever close above 2400, but this penetration held for only one day as the index backed off to 2339 yesterday. Much of this action qualIfies, by historic standards, as unusual volatIlity. Intra-day volalllity is a subject we first examined at the end of January after the first phase of the extraordinary 1987 rIse. We hypothesized, that, at the very least, an acceptable proxy for market volatility was the spread between the Dow's intra-day high and intra-day low expressed as a percentage of the close. Inspection seemed to indicate that anything above 3 for this statistic fell into the exceptional category. This threshold was exceeded on both January 22 and January 23, with the latter date setting a post-1974 record at 7.2. More recently, the March 30 dechne, the April 3 rise, and the April 7 drop also qualified as unusually volatile days. Investigation indicated that such volatility had an almost uncanny forecasting record for as long as six months ahead. The chart below shows the Dow on a weekly basis from mid-1974 to date, with the vertical lines at the bottom showing the highest weekly figure attamed by the high-low sprelld. It is apparent at a glance that such action has tended to precede upward markets. There have been, in the period shown, 120 days when the high-low difference was greater than 3 of the close. On III of those occassions the Dow was up 125 trading days (approximately six months) later. The occurrence of high intra-day volatility, -therefore, foreshadowed an upward market 92.5- of the time. By contrast, examination of all 3106 trading days since 1974 reveals that over the following six months the DJIA rose only 63.6 of the time. The likelihood of the association between volatility and market rises being a chance phenomenon would be analogous to the chance of drawing a sample of 120 marbles from a jar and finding that 111 of them were white when the jar was known to contain only 1977 white marbles and 1129 black ones. For statistic freaks the chi-square for this statistic is 43.17, suggesting that the probability of a chance occurrence is a great deal under 1 in 2000. We confess that we have no rationale for this relationship despite the impressive statistical record. That record, however, suggests that the volatility displayed early this week indicates higher prices over the next six months. ANTHONY W. TABELL DELAFIELD, HARVEY, TABELL INC, AWTBH Dow .Jones Industrials (12 00 pm) 2338.21 S & P 500 (1200 pm) 293.53 Cumulative Index (419187) 3756.77 NO Slalemenl or e.quesSlOn of Opinion or anyolher malter hemin contained IS or IS 10 be deemed to be directly or indirectly an offer or the soliCitation of an offer 10 buy or sell any security referred to or mentioned The matter 15 presenled merely for the convenience of the Subscllber While we beheve the sources of our Informahon to be reliable y'eln no way represent or guarantee the accuracy thereof nor of the statements made herein Any action to be taken by the subscriber should be based on hiS own Inveshgallon and information Delafield Harvey TabeH Inc as a corporahon and Its olhcers or employees may now have or may (ater lake, pOSlhons or trades In respect to any seculltles mentioned In thiS or any future Issue, and SUCh pOSlhon may be different from any views now or helealter epressed In thiS or any other Issue Delafield Harvey, TabeH Inc whiCh IS registered With the SECas an Investment adVisor may give adVice 10 ItS Inveslment adVisory and othe' customers Independently of any statemenls made In !hl'l or In any other Issue Further informatIOn on any SeCufI\y menlloned herem IS available on request