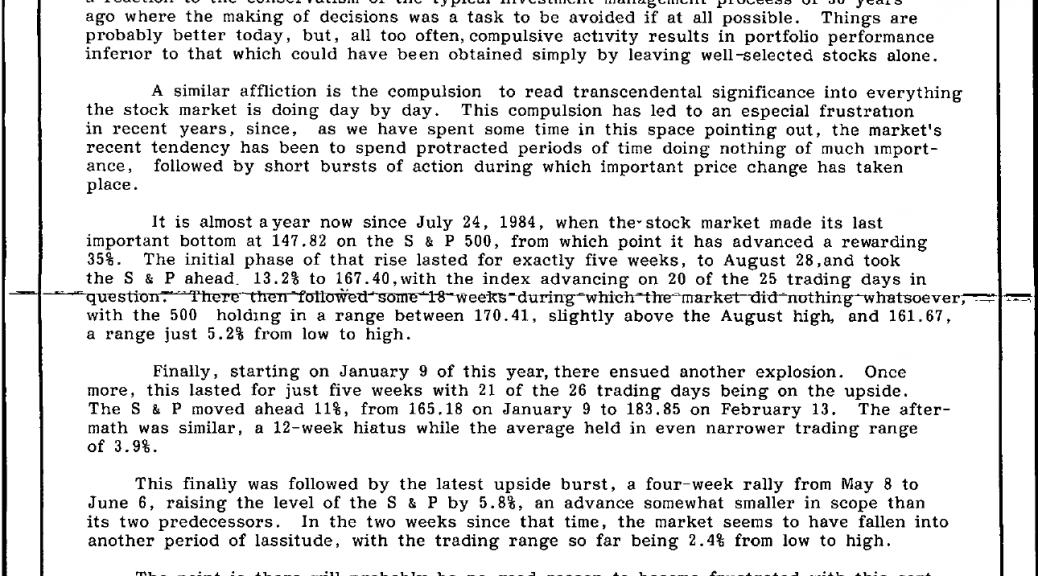 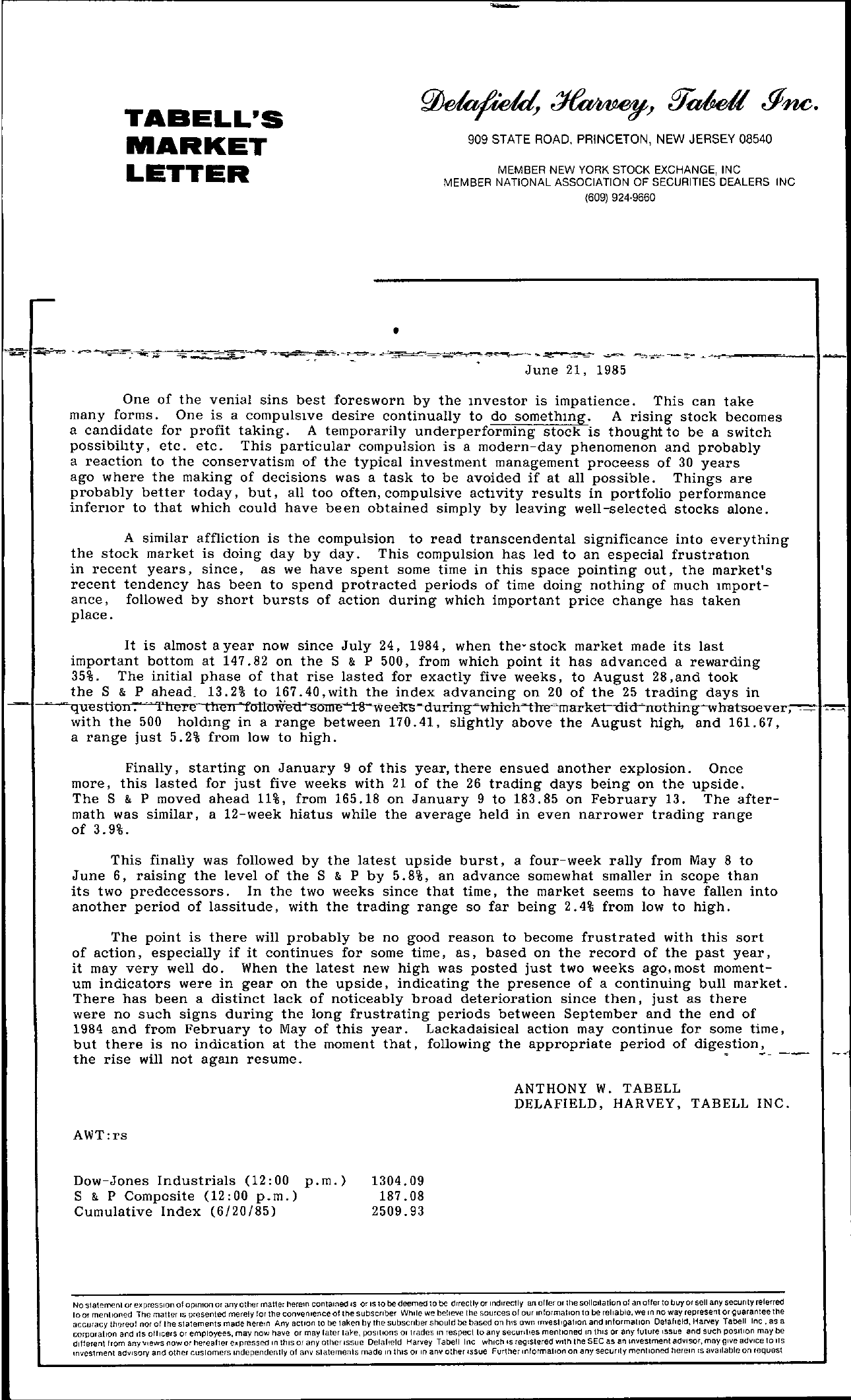 – TABELL'S MARKET LETTER 909 STATE ROAD, PRINCETON, NEW JERSEY 08540 MEMBER NEW YORK STOCK EXCHANGE, INC MEMBER NATIONAL ASSOCIATION OF SECURITIES DEALERS INC (609) 9249660 – June 21, 1985 One of the venial sins best foresworn by the Investor is impatience. This can take many forms. One is a compulsIve desire continually to do somethIng. A rising stock becomes a candidate for profit taking. A temporarily underperforming stock is thought to be a switch possibihty, etc. etc. This particular compulsion is a modern-day phenomenon and probably a reaction to the conservatism of the typical investment management proceess of 30 years ago where the making of decisions was a task to be avoided if at all possible. Things are probably better today, but, all too often, compulsive actlvity results in portfolio performance inferIOr to that which could have been obtained simply by leaving well-selected stocks alone. A similar affliction is the compulsion to read transcendental Significance into everything the stock market is doing day by day. This compulsion has led to an especial frustratIOn in recent years, since, as we have spent some time in this space pointing out, the market's recent tendency has been to spend protracted periods of time doing nothing of much Importance, followed by short bursts of action during which important price change has taken place. It is almost a year now since July 24, 1984, when the' stock market made its last important bottom at 147.82 on the S & P 500, from which point it has advanced a rewarding 35. The initial phase of that rise lasted for exactly five weeks, to August 28,and took the S & P ahead. 13.2 to 167.40, with the index advancing on 20 of the 25 trading days in I -questtClTl.''4'iTere then followetl-smnl'lirween-duringwhich the-lliarket-tiid'nuthing-whatsoever;-o with the 500 holdIng in a range between 170.41, slightly above the August high, and 161.67, a range just 5.2 from low to high. Finally, starting on January 9 of this year, there ensued another explosion. Once more, this lasted for just five weeks with 21 of the 26 trading days being on the upside. The S & P moved ahead 11, from 165.18 on January 9 to 183.85 on February 13. The aftermath was similar, a 12-week hiatus while the average held in even narrower trading range of 3.9. This finally was followed by the latest upside burst, a four-week rally from May 8 to June 6, raising the level of the S & P by 5.8, an advance somewhat smaller in scope than its two predecessors. In the two weeks since that time, the market seems to have fallen into another period of lassitude, with the trading range so far being 2.4 from low to high. The point is there will probably be no good reason to become frustrated with this sort of action, especially if it continues for some time, as, based on the record of the past year, it may very well do. When the latest new high was posted just two weeks ago, most moment- um indicators were in gear on the upside, indicating the presence of a continuing bull market. There has been a distinct lack of noticeably broad deterioration since then, just as there were no such signs during the long frustrating periods between September and the end of 1984 and from February to May of this year. Lackadaisical action may continue for some time, but there is no indication at the moment that, following the appropriate period of digestion, the rise will not agaIn resume. — ANTHONY W. TAB ELL DELAFIELD, HARVEY, TABELL INC. AWTrs Dow-Jones Industrials (12 00 p. m. ) S & P Composite (1200 p.m.) Cumulative Index (6/20/85) 1304.09 187.08 2509.93 NO statement or expreSSion of Opinion Of any other maltcr herem contained IS Of IS to be deemed to be directly Of indirectly an ofler or the sollcllatlon 01 an olrer to buyor sell any security reterred toor mentioned The mailer IS presented merely lor the convenlcnceollhesubscnber While we believe the sources of our mformahon to be reliable. we In noway represent or guarantee the accuracy th'1reol nor althe statements made herem Any acllon to be taken by Ihe subSCriber should be based on hiS own mvestlgatlon and Informal Ion Oelaflekl, Harvey label! Inc, as a corporation and liS ofilcers or employees, may now have or may laler lale, poSlltons Oillades In respect to any securities menlloned In thiS or any future Issue and such POSition may be dlUerent from any views now or hereafler e.-pressed In thiS or any other Issue Delafield Harvey label! Inc which IS reglslered With Ihe SEC as an Investment adVisor, may give adVice tOllS Investment adVISOry and other cuslomers Independenlly of any statements made In thiS or In any other Issue Further mformatlon on any security mentioned herein IS available on request