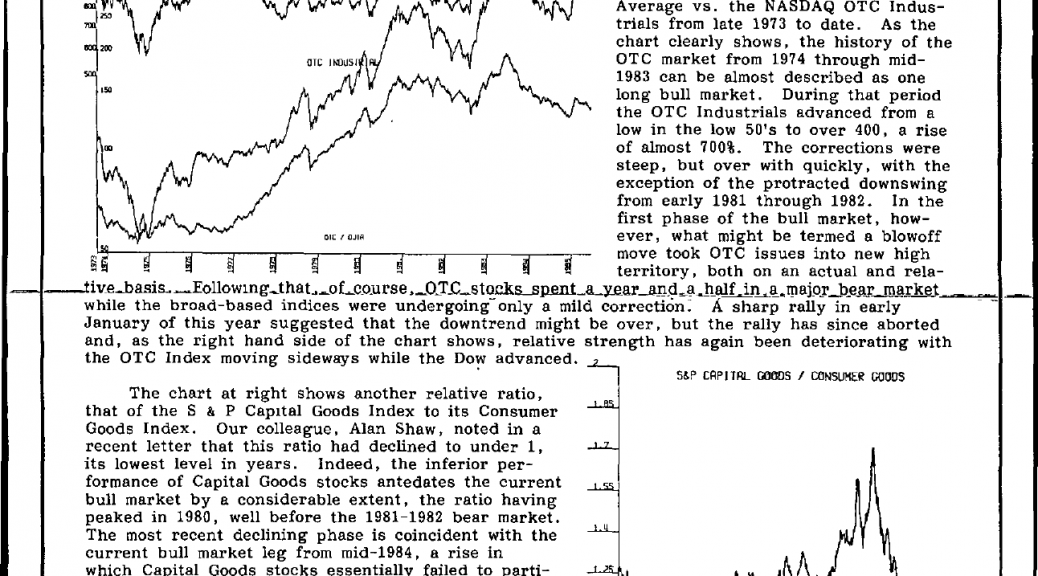 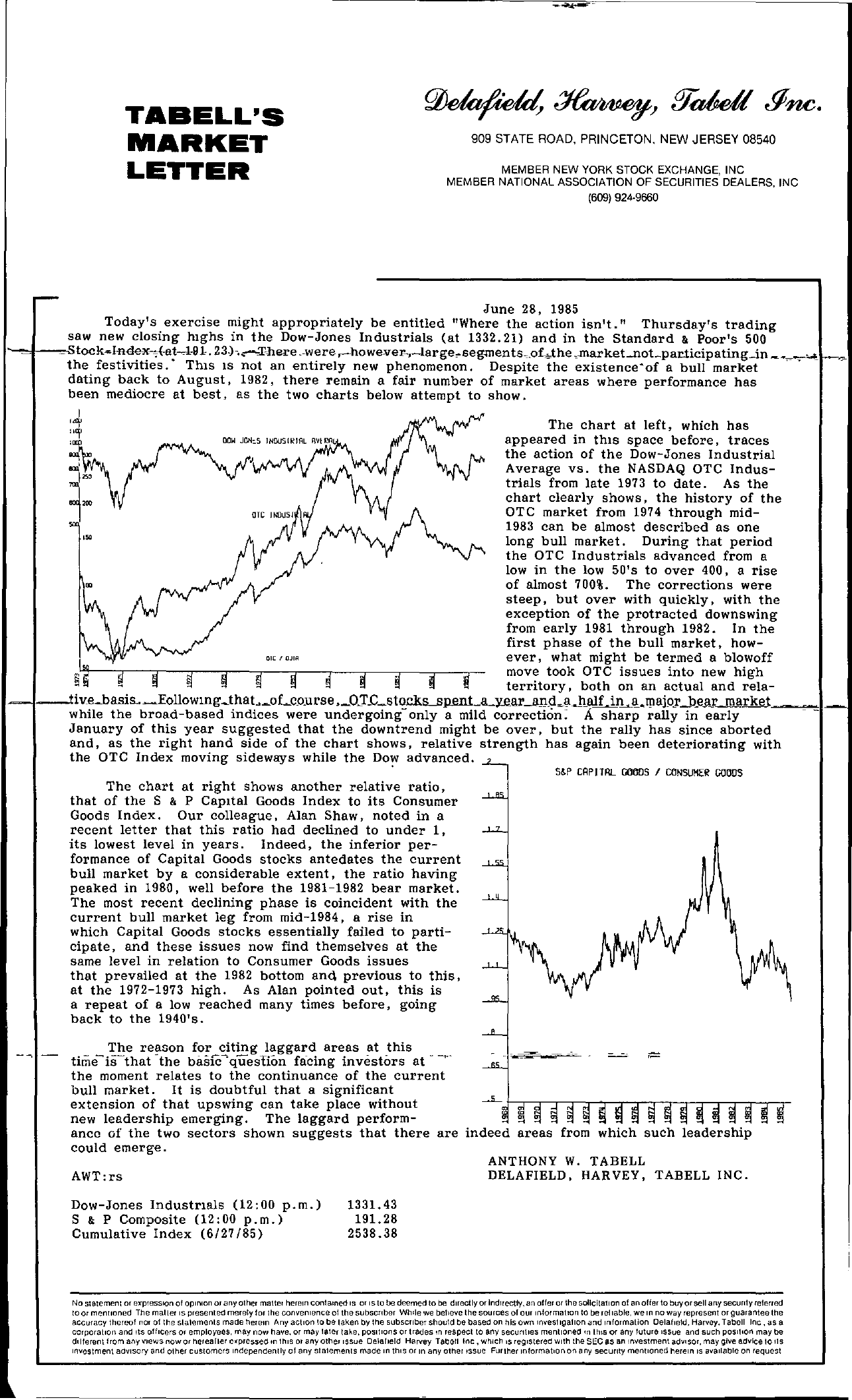 TABELL'S MARKET LETTER — 909 STATE ROAD, PRINCETON. NEW JERSEY 08540 MEMBER NEW YORK STOCK EXCHANGE. INC MEMBER NATIONAL ASSOCIATION OF SECURITIES DEALERS. INC (609) 924-9660 June 28, 1985 Today's exercise might appropriately be entitled Where the action isn't. Thursday's trading saw new closing hIghs in the Dow-Jones Industrials (at 1332.21) and in the Standard & Poor's 500 II—S tock-Il,-,-a-1-91. 23hhere .-were ,-howeer-,—large.seg.men ts.o(,the emarkeLnoLparticip atingin the festIVItIes. ThIS IS not an entIrely new phenomenon. Despite the existence'of a bull market dating back to August, 1982, there remain a fair number of market areas where performance has been mediocre at best, as the two charts below attempt to show. The chart at left, which has appeared in thIS space before, traces the action of the Dow-Jones Industrial Average vs. the NASDAQ OTC Indus- trials from late 1973 to date. As the chart clearly shows, the history of the OTC market from 1974 through mid- 1983 can be almost described as one long bull market. During that period the OTC Industrials advanced from a low in the low 50's to over 400, a rise of almost 700. The corrections were steep, but over with quickly, with the exception of the protracted downswing from early 1981 through 1982. In the first phase of the bull market, how- Ole DJIA ever, what might be termed a blowoff move took OTC issues into new high territory, both on an actual and rela- –tivebasis..EollowlIlgthat.oLcourse ,O.TCstocks..sJlllIlLal1llarJJl.d.a.half illl!.majoJ'beJU' market' -I while the broad-based indices were undergoing- only a mild correction A sharp rally in early January of this year suggested that the downtrend might be over, but the rally has since aborted and, as the right hand side of the chart shows, relative strength has again been deteriorating with the OTC Index moving sideways while the Do advanced. S&P CAPITAL GOODS I CONSUMER GOODS The chart at right shows another relative ratio, that of the S & P CapItal Goods Index to its Consumer Goods Index. Our colleague, Alan Shaw, noted in a recent letter that this ratio had declined to under I, its lowest level in years. Indeed, the inferior per- formance of Capital Goods stocks antedates the current bull market by a considerable extent, the ratio having peaked in 1980, well before the 1981-1982 bear market. The most recent declining phase is coincident with the current bull market leg from mid-1984, a rise in which Capital Goods stocks essentially failed to parti- cipate, and these issues now find themselves at the same level in relation to Consumer Goods issues that prevailed at the 1982 bottom anl previous to this, at the 1972-1973 high. As Alan pointed out, this is a repeat of a low reached many times before, going back to the 1940's. The reason for citing laggard areas at this thiie-is-that -the basIc-qiIesTion facing investors at -. the moment relates to the continuance of the current bull market. It is doubtful that a significant extension of that upswing can take place without new leadership emerging. The laggard perform- ance of the two sectors shown suggests that there are indeed areas from which such leadership could emerge. ANTHONY W. TAB ELL AWTrs DELAFIELD, HARVEY, TABELL INC. Dow-Jones IndustrIals (12 00 p. m.) S & P Composite (1200 p.m.) Cumulative Index (6/27/85) 1331. 43 191.28 2538.38 No statement or expression of opinion or any other matter herem contained IS or IS to be deemed to be directly or IndlrecUy, an offer or the solicitation of an offer to buyor sell any secunty referred 1001 mentlonoo The matter IS presented merely for the convenience of Ihasubscnber While we beheve the sources of our mlormallon 10 be reliable, we In no way represent orguaranleethe accuracy thereof nor of the slalemenlS made herem Any action to be taken by the subscriber should be based on his own Invesllgallon and Informallon Delafield, Harvey, Tabell Inc, as a corporation and Its officers or employees, may now have, or may tater tae, positions or trades In respect 10 any securtlles mentioned In thiS or any lutura Issue and such pOSl\lon may be diliereni from any VieWS now or hereafler c(pressed m thiS or any other Issue Delafield Harvey Tabell Inc, which IS registered With the SEC as an Investment adVisor, may give advice tOils Investment adVISOry and other customers Independently of any statements made Ifl thiS or In any other Issue Further mformatlon on a ny security mentioned herelfl IS available on request