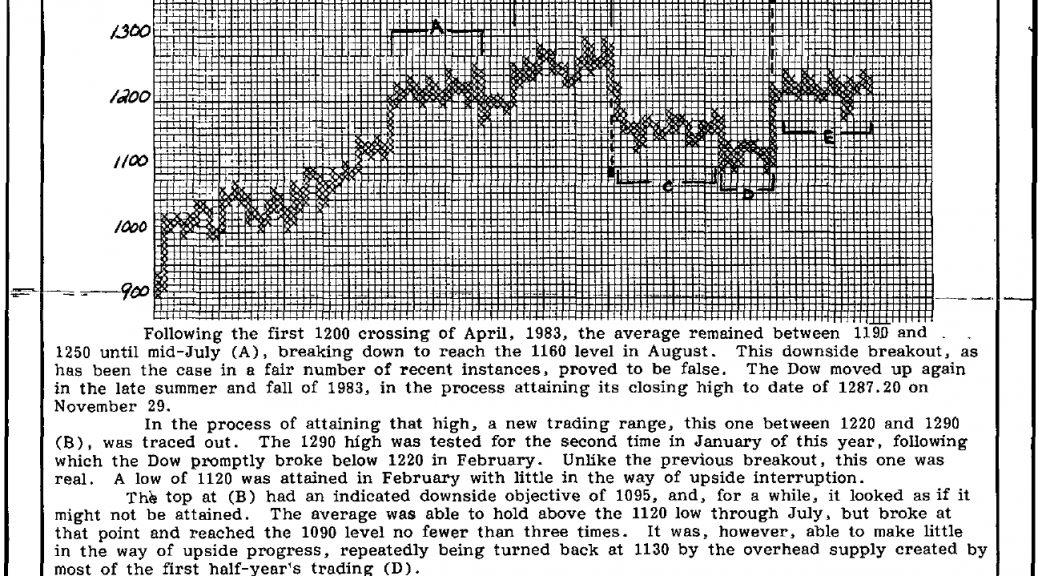 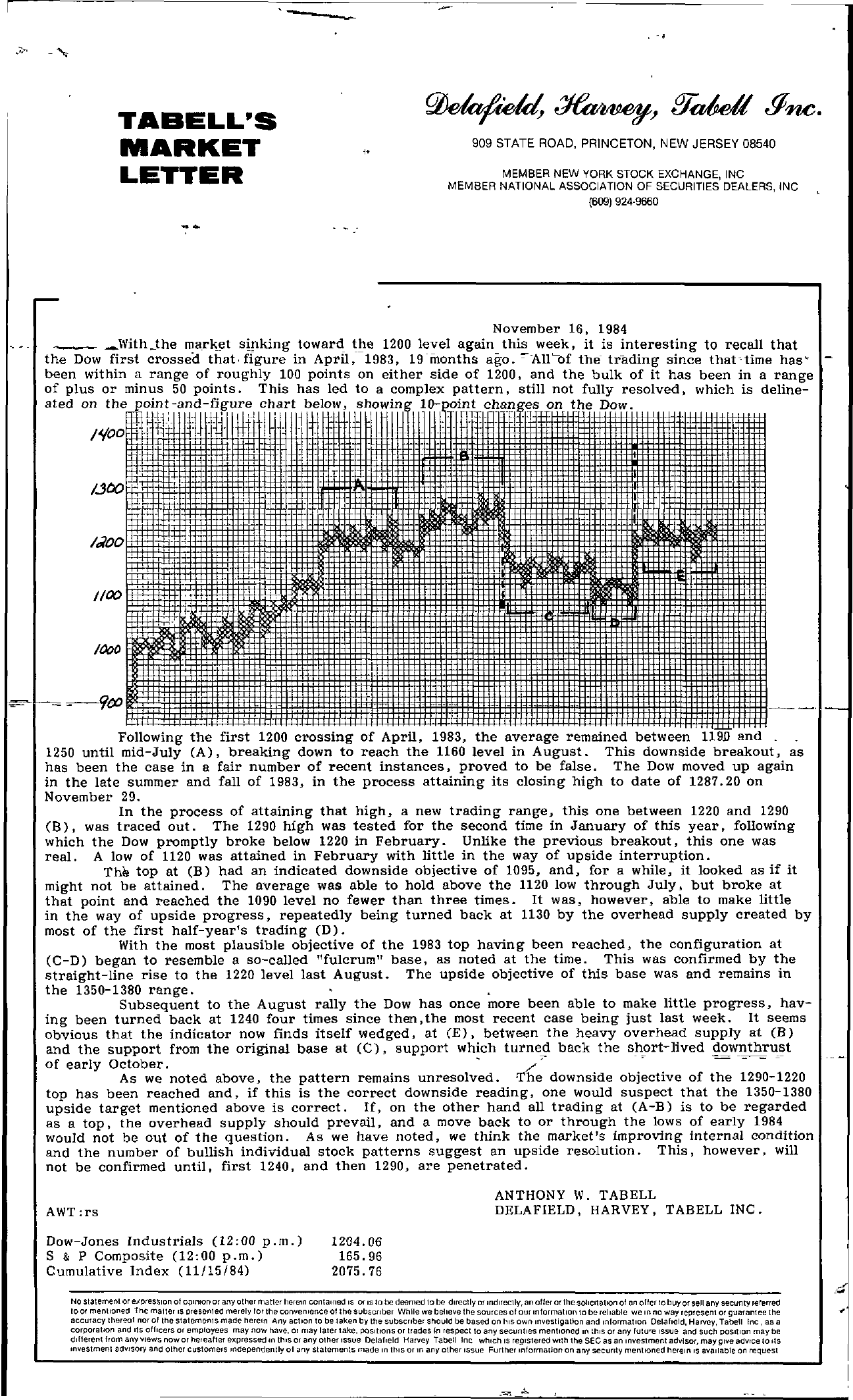 TABELL'S MARKET LETTER , ,. 909 STATE ROAD, PRINCETON, NEW JERSEY 08540 MEMBER NEW YORK STOCK EXCHANGE, INC MEMBER NATIONAL ASSOCIATION OF SECURITIES DEALERS, INC (609) 924,9660 November 16, 1984 With the ma,rket si!1king toward tile 1200 level again this week, it is interesting to recall that the Dow first crossed that, figure in April, 1983, 19'months ago. -Allof the' trading since that-time has' been within a range of roughly 100 points on either side of 1200, and the bulk of it has been in a range of plus or minus 50.0 This has led to a complex pattern, still not fully resolved, which is deline- ated on the Joint uuu ,'fl ,.Jre chart below I, II IT Uel,' ' ,, hnw;n , on Dow. – – 0. Following the first 1200 crossing of April, 1983, the average remained between 11 0 an. 1250 until mid-July (A), breaking down to reach the 1160 level in August. This downside breakout, as has been the case in a fair number of recent instances, proved to be false. The Dow moved up again in the late summer and fall of 1983, in the process attaining its closing high to date of 1287.20 on November 29. In the process of attaining that high, a new trading range, this one between 1220 and 1290 (B), was traced out. The 1290 high was tested for the second time in January of this year, following which the Dow promptly broke below 1220 in February. Unlike the previous breakout, this one was real. A low of 1120 was attained in February with little in the way of upside interruption. Thlo top at (B) had an indicated downside objective of 1095, and, for a while, it looked as if it might not be attained. The average was able to hold above the 1120 low through July, but broke at that point and reached the 1090 level no fewer than three times. It was, however, able to make little in the way of upside progress, repeatedly being turned back at 1130 by the overhead supply created by most of the first half-year's trading (D). With the most plausible objective of the 1983 top having been reached, the configuration at (C-D) began to resemble a so-called fulcrum base, as noted at the time. This was confirmed by the straight-line rise to the 1220 level last August. The upside objective of this base was and remains in the 1350-1380 range. . Subsequent to the August rally the Dow has onCe more been able to make little progress, hav- ing been turned back at 1240 four times since then, the most recent case being just last week. It seems obvious that the indicator now finds itself wedged, at (E), between the heavy overhead supply at (B) and the support from the original base at (e), support which turned back the short-lived downthrust of early October. /7 ' C – 0- As we noted above, the pattern remains unresolved. The downside objective of the 1290-1220 top has been reached and, if this is the correct downside reading, one would suspect that the 1350-1380 upside target mentioned above is correct. If, on the other hand all trading at (A-B) is to be regarded as a top, the overhead supply should prevail, and a move back to or through the lows of early 1984 would not be out of the question. As we have noted, we think the market's improving internal condition and the number of bullish individual stock patterns suggest an upside resolution. This, however, will not be confirmed until, first 1240, and then 1290, are penetrated. AWTrs ANTHONY W. TAB ELL DELAFIELD, HARVEY, TAB ELL INC. Dow-Jones Industrials (12 00 p. m.) S & P Composite (1200 p.m.) CumUlative Index (11 115 184) 1204.06 165.96 2075.76 NO statement or e..-presslOn 01 opinion or any other matter herom contamed IS or IS to be deemed to be dlreclly or mdlrectly. an olfer or the soliCitation of an offer to buy or sell any secunty referred tOOf mentioned The mailer IS presonled merely forthe convenl(mceollhesubscnber While we believe the sources of our information to berellabte we Inno way represent or guarantee the accuracy thereof nor of the statoments made herein Any action to be laken by the subscriber shoutd be based on his own investigation and information Delafield Harvoy TaOOIl Inc as a corporation and Its offlc(lrs or employees may now have, or may later take, pOSitIOns or trades in respect to any secuntles mentioned In thiS or any future Issue nd such POSition my be dillereni from any views nowor hereafter expressed m thiS or any olherlssue Delalreld Harvey labell Inc which IS registered With the SECas an mvestment advisor, may 91ve advice to liS mvestment adVISOry and other customers rndependently 01 any statements made m thiS or In any other Issue Further mformatlon on any secunty mentioned herem IS available on request .,