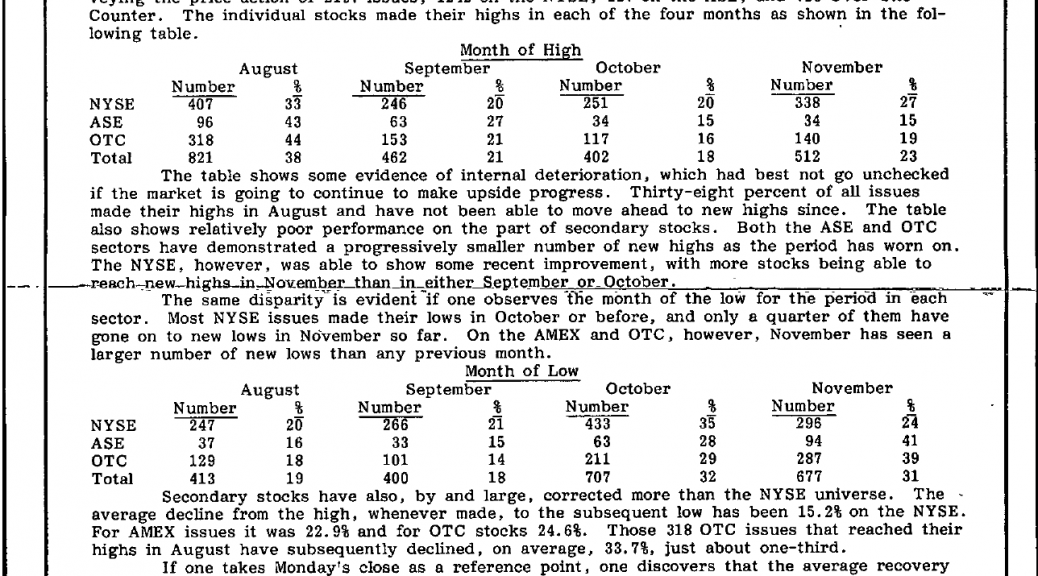 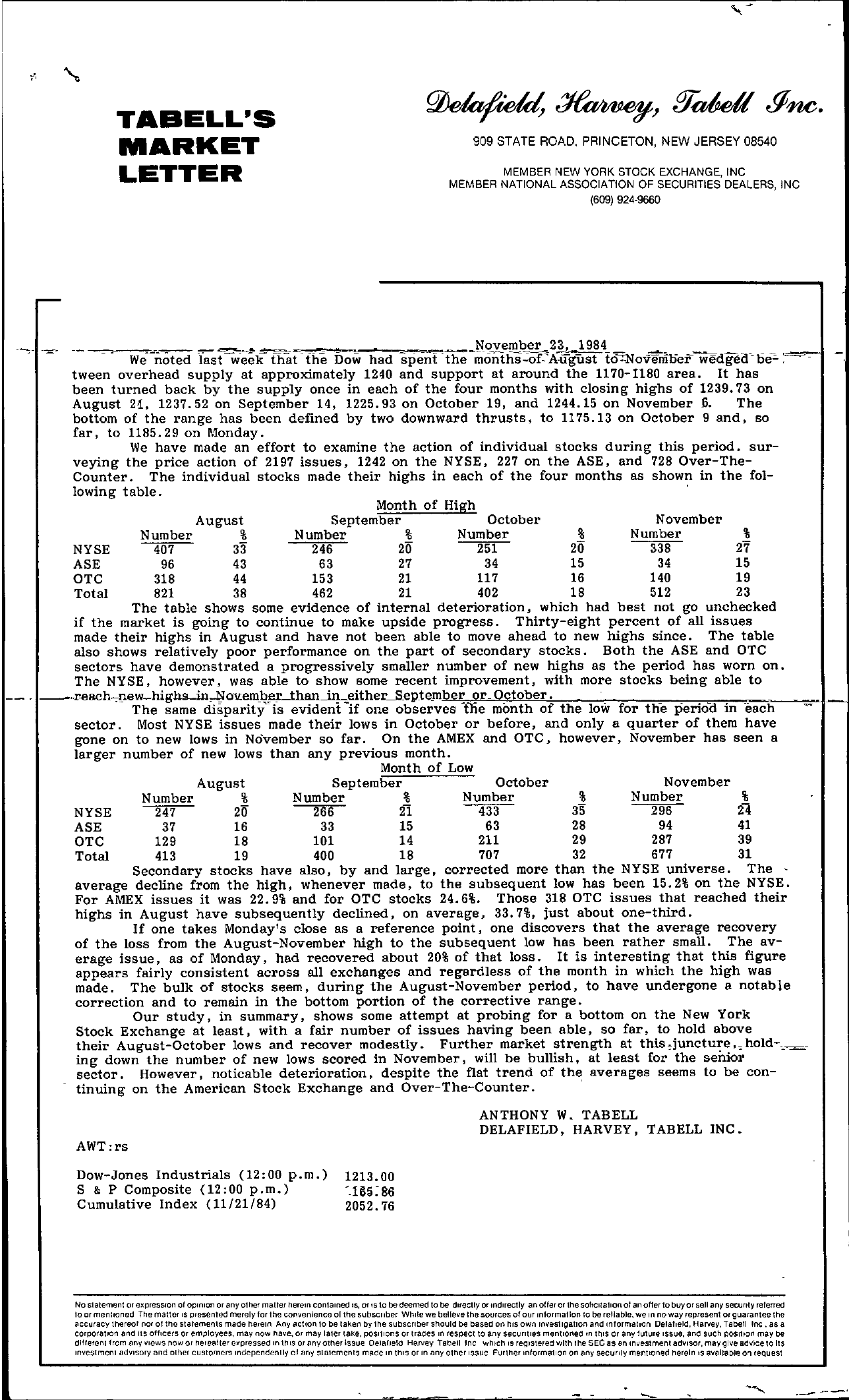 TABELL'S MARKET LETTER 909 STATE ROAD, PRINCETON, NEW JERSEY 08540 MEMBER NEW YORK STOCK EXCHANGE, INC MEMBER NATIONAL ASSOCIATION OF SECURITIES DEALERS, INC (609) 9249660 — ,, Noy'e!'1.er23, 1984 We noted last week that the Dow had spent 'the monthsof-'A-ugust to'.Novemoer wedgea'oe ;'– tween overhead supply at approximately 1240 and support at around the 1170-1180 area. It has been turned back by the supply once in each of the four months with closing highs of 1239.73 on August 21, 1237.52 on September 14, 1225.93 on October 19, and 1244.15 on November 6. The bottom of the range has been defined by two downward thrusts, to 1175,13 on October 9 and, so far, to 1185.29 on Monday. We have made an effort to examine the action of individual stocks during this period. sur- veying the price action of 2197 issues, 1242 on the NYSE, 227 on the ASE, and 728 Over-The- Counter. The individual stocks made their highs in each of the four months as shown in the fol- lowing table. Month of High August September October November Number Number Number Number NYSE 407 33 246 2'0 251 2'0 338 27 ASE 96 43 63 27 34 15 34 15 OTC 318 44 153 21 117 16 140 19 Total 821 38 462 21 402 18 512 23 The table shows some evidence of internal deterioration, which had best not go unchecked if the market is going to continue to make upside progress, Thirty-eight percent of all issues made their highs in August and have not been able to move ahead to new highs since. The table also shows relatively poor performance on the part of secondary stocks. Both the ASE and OTC sectors have demonstrated a progressively smaller number of new highs as the period has worn on. The NYSE, however, was able to show some recent improvement, with more stocks being able to each-c-!lewhigh-in,-November…thanJILeither….s.ep.temb'-'e'-'ro'-'r'–'Oc-'tobe'-'ri.c—,-.—-.–;;7.—-c;-..,.'1 The same disparityis evident -if one observes -ffie month of the low for tile perioa in each sector, Most NYSE issues made their lows in October or before, and only a quarter of them have gone on to new lows in November so far, On the AMEX and OTC, however, November has seen a larger number of new lows than any previous month. Month of Low August September October November Number Number NYSE 247 2'0 266 Number 21 433 Number 35 296 24 ASE 37 16 33 15 63 28 94 41 OTC 129 18 101 14 211 Total 413 19 400 18 707 29 287 39 32 677 31 Secondary stocks have also, by and large, corrected more than the NYSE universe. The average decline from the high, whenever made, to the subsequent low has been 15.2 on the NYSE. For AMEX issues it was 22.9 and for OTC stocks 24.6. Those 318 OTC issues that reached their highs in August have subsequently declined, on average, 33.7, just about one-third. If one takes Monday's close as a reference point, one discovers that the average recovery of the loss from the August-November high to the subsequent low has been rather small. The av- erage issue, as of Monday, had recovered about 20 of that loss. It is interesting that this figure appears fairly consistent across all exchanges and regardless of the month in which the high was made. The bulk of stocks seem, during the August-November period, to have undergone a notable correction and to remain in the bottom portion of the corrective range. Our study, in summary, shows some attempt at probing for a bottom on the New York Stock Exchange at least, with a fair number of issues having been able, so far, to hold above their August-October lows and recover modestly. Further market strength at this,juncturehold-c ing down the number of new lows scored in November, will be bullish, at least for the serlior sector. However, noticable deterioration, despite the flat trend of the averages seems to be con- tinuing on the American Stock Exchange and Over-The-Counter. ' AWTrs ANTHONY W. TAB ELL DELAFIELD, HARVEY, TAB ELL INC. Dow-Jones Industrials (1200 p.m.) 1213.00 S & P Composite (1200 p.m.) '.16586 Cumulative Index (11/21/84) 2052.76 No S1atemenl or expression 01 opinion or any other matter herem contained IS, or ,s to be deemed to be dlrectty or mdlrectly an offer or the sohclla1l0n of an oller to buyor sell any security referred 10 or mentIoned The matter IS presented merely for the convenience 01 the subscriber While we believe the sources of our mformatlon 10 be reliable, we In no way represent or guarantee the accuracy thereof nor 01 the statements made herem Any action to be taken bylhe subSCriber should be based on hiS own Investigation and Information Delafield, Harvey, labell tnc, as a corporation and lis officers or employees, may now have, or may laler take. pOSitions or trades In respect to any secuntles mentioned In thiS or any future Issue, and such pOSlllon may be dlfferenllrom any VIOWS now or Mlealter opressed In Ihls or any other Issue Delafield Harvey label! fnc which IS registered wIth the SECas an Investment adVisor, may give advice to Its Investment adVisory and other customers Independently 01 any slalemcnls made In thiS or In any other Issue Further Informal Ion on any securlly mentioned herein IS available on request .—'