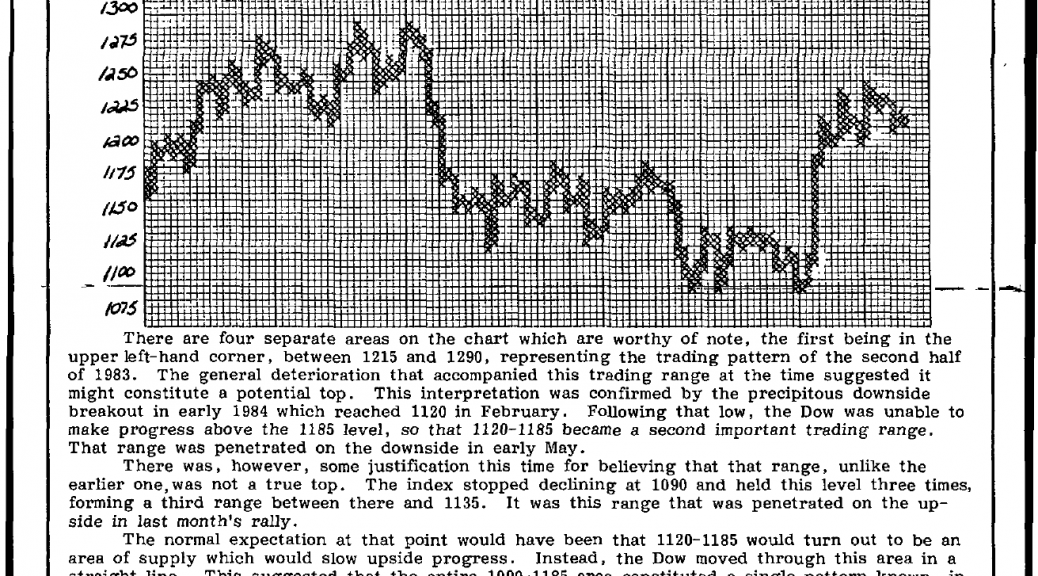 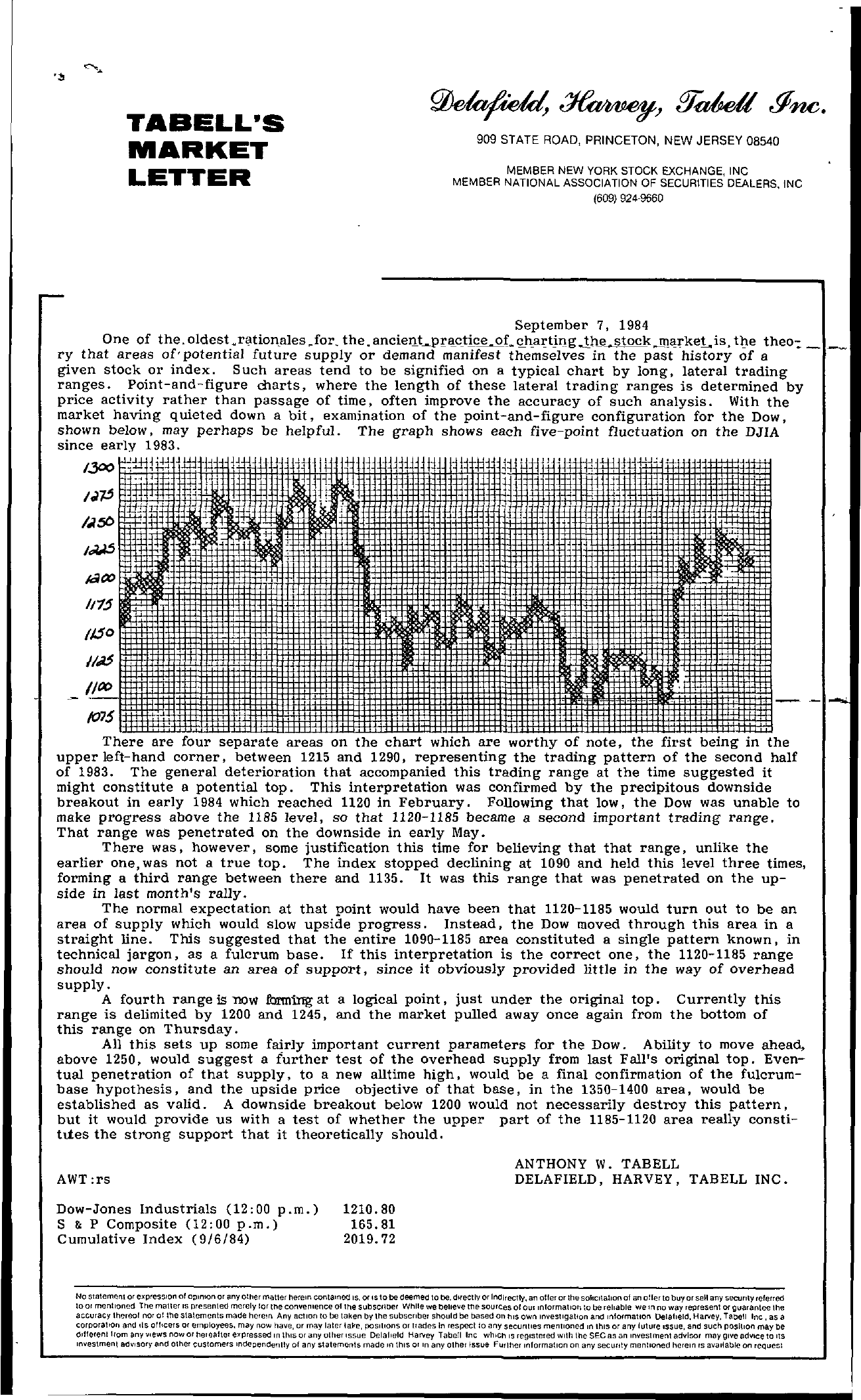 TABELL'S MARKET LETTER 909 STATE ROAD, PRINCETON, NEW JERSEY 08540 MEMBER NEW YORK STOCK EXCHANGE, INC MEMBER NATIONAL ASSOCIATION OF SECURITIES DEALERS, INC (609) 9249660 September 7, 1984 One of the,oldest.rationalesJor, the.anciel)tprBcctice of.C!,hartil)g.1he stock.markeLis, the theo- ry that areas of' potential future supply or demand manifest themselves in the past history of a given stock or index, Such areas tend to be signified on a typical chart by long, lateral trading ranges. Point-and-figure dlarts, where the length of these lateral trading ranges is determined by price activity rather than passage of time, often improve the accuracy of such analysis. With the market having quieted down a bit, examination of the point-and-figure configuration for the Dow, shown below, may perhaps be helpful. The graph shows each five-point fluctuation on the DJIA since early 1983, 1.300 I I.-SO I 1 I/So II I/()O 1075 There are four separate areas on the chart which are worthy of note, the being in the upper left-hand corner, between 1215 and 1290, representing the trading pattern of the second half of 1983, The general deterioration that accompanied this trading range at the time suggested it might constitute a potential top, This interpretation was confirmed by the precipitous downside breakout in early 1984 which reached 1120 in February. Following that low, the Dow was unable to make progress above the 1185 level, so that 1120-1185 became a second important trading range. That range was penetrated on the downside in early May. There was, however, some justification this time for believing that that range, unlike the earlier one, was not a true top. The index stopped declining at 1090 and held this level three times, forming a third range between there and 1135. It was this range that was penetrated on the up- side in last month's rally. The normal expectation at that point would have been that 1120-1185 would turn out to be an area of supply which would slow upside progress. Instead, the Dow moved through this area in a straight line. This suggested that the entire 1090-1185 area constituted a single pattern known, in technical jargon, as a fulcrum base. If this interpretation is the correct one, the 1120-1185 range should now constitute an area of support, since it obviously provided little in the way of overhead supply. A fourth range is now funning at a logical point, just under the original top. Currently this range is delimited by 1200 and 1245, and the market pulled away once again from the bottom of this range on Thursday. All this sets up some fairly important current parameters for the Dow. Ability to move ahead, above 1250, would suggest a further test of the overhead supply from last Fall's original top. Even- tual penetration of that supply, to a new alltime high, would be a final confirmation of the fulcrum- base hypothesis, and the upside price objective of that base, in the 1350-1400 area, would be established as valid. A downside breakout below 1200 would not necessarily destroy this pattern, but it would provide us with a test of whether the upper part of the 1185-1120 area really consti- hies the strong support that it theoretically should. AWT rs ANTHONY W. TAB ELL DELAFIELD, HARVEY, TABELL INC. Dow-Jones Industrials (12 00 p.m.) S & P Composite (1200 p.m.) Cumulative Index (9/6/84) 1210.80 165.81 2019.72 No statemnl Of expression of opinion or any other matter herein contamClIS. Of IS to be deemed to be, directly or Indirectly. an oller or the soliCitation of an olfer to buyor sell any security referred to or mentioned The maHer IS presented merely lor the convenience of the subscllber While we betleve the sourCes 01 OUI Information 10 be reliable we In no way represent or guarantee the accuracy thereof nor ollhe statements made herem Any action 10 be taken by the subSCriber should be based on hiS own Investlgalton and mlormatlon Delafield, Harvey, Tabel! Inc, as a corporatIOn and 1\5 officers or employees, may now have, or may later lale, poSI\!ons or trades In respect 10 any securities mentioned 10 Ihls or any future Issue, and such position may be different 110m any views now or hereafter expressed In thiS or any other Issue Delafield Harvey Tabell Inc whiCh IS registered With the SEC as an Investment advisor may give advice to Its Investment adVisory and olhel customers Independently of any statements made In thiS or In any other Issue Further Information on any securtty mentioned herem IS available on reQuest