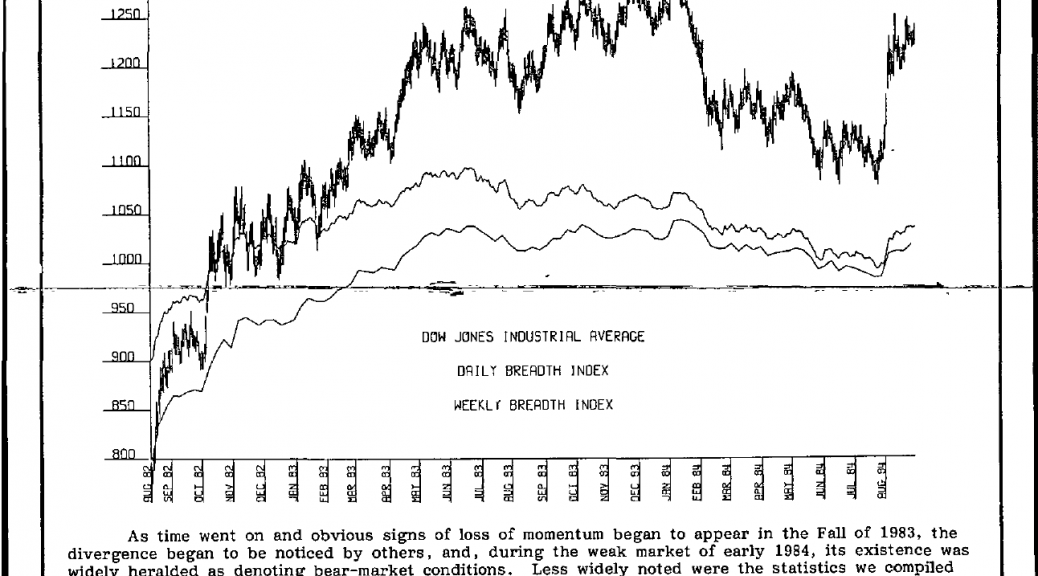 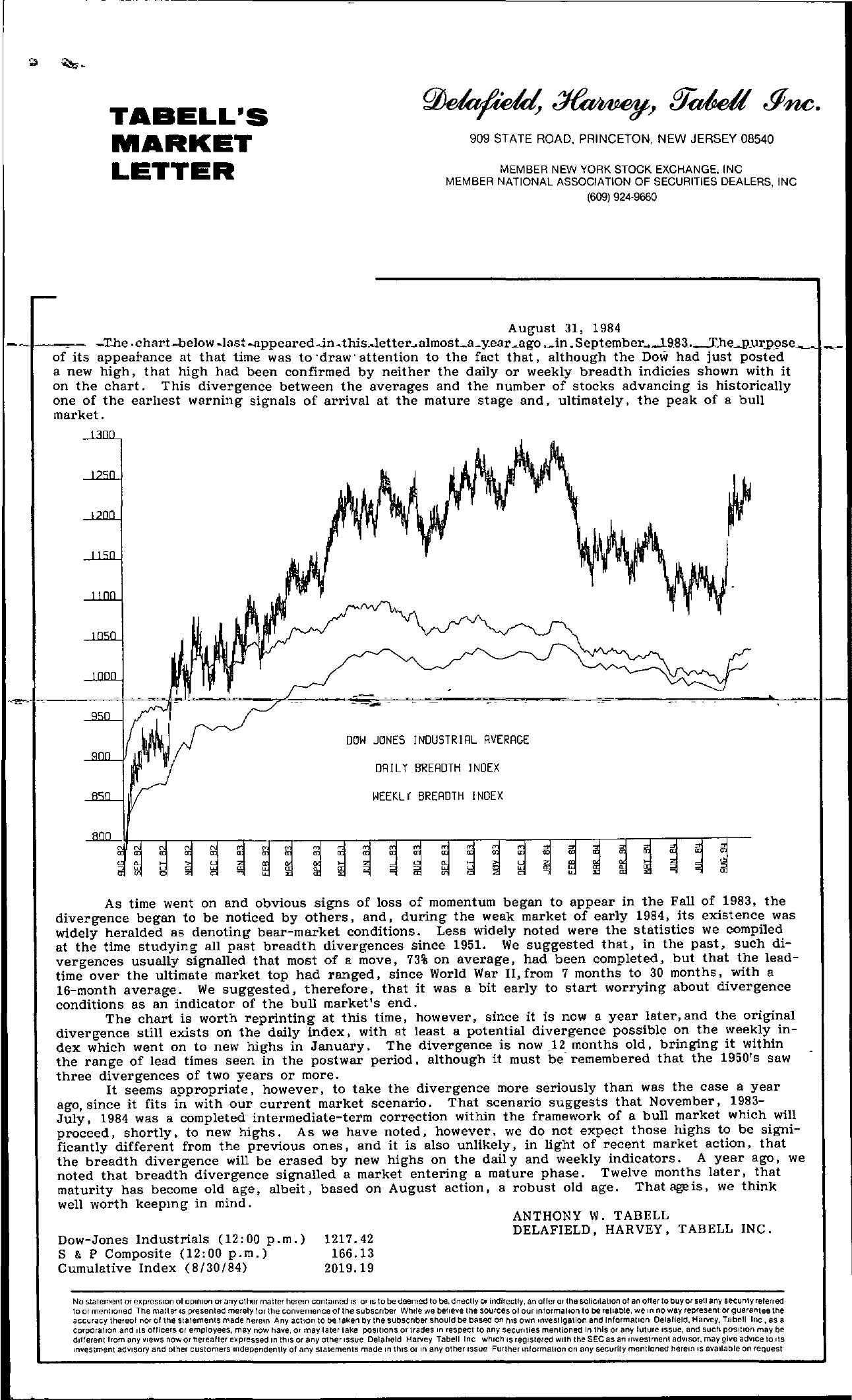 TABELL'S MARKET LETTER 909 STATE ROAD. PRINCETON, NEW JERSEY 08540 MEMBER NEW YORK STOCK EXCHANGE. INC MEMBER NATIONAL ASSOCIATION OF SECURITIES DEALERS, INC (609) 9249660 August 31. 1984 T.he .chartbelow .Iast -appearedin .this..Jetteralmostayearago .in. Septllm!er..l9,83.—.T.he…p.urpose of its appearance at that time was to 'draw' attention to the fact that. although the Dow had just posted a new high. that high had been confirmed by neither the daily or weekly breadth indicies shown with it on the chart. This divergence between the averages and the number of stocks advancing is historically one of the earhest warning signals of arrival at the mature stage and. ultimately. the peak of a bull market. DOW JONES INDUSTRIRL RVERRGE DRILr BRERDTH INDEX WEEKLr BRERDTH INDEX As time went on and obvious signs of loss of momentum began to appear in the Fall of 1983. the divergence began to be noticed by others. and. during the weak market of early 1984. its existence was widely heralded as denoting bear-market conditions. Less widely noted were the statistics we compiled at the time studying all past breadth divergences since 1951. We suggested that. in the past. such di- vergences usually signalled that most of a move. 73 on average. had been completed, but that the lead- time over the ultimate market top had ranged, since World War II, from 7 months to 30 months. with a 16-month average. We suggested, therefore. that it was a bit early to start worrying about divergence conditions as an indicator of the bull market's end. The chart is worth reprinting at this time. however, since it is now a year later. and the original divergence still exists on the daily index. with at least a potential divergence possible on the weekly in- dex which went on to new highs in January. The divergence is now 12 months old. bringing it within the range of lead times seen in the postwar period. although it must be remembered that the 1950's saw three divergences of two years or more. It seems appropriate. however. to take the divergence more seriously than was the case a year ago, since it fits in with our current market scenario. That scenario suggests that November, 1983- July. 1984 was a completed intermediate-term correction within the framework of a bull market which will proceed. shortly. to new highs. As we have noted. however. we do not expect those highs to be signi- ficantly different from the previous ones. and it is also unlikely. in light of recent market action. that the breadth divergence will be erased by new highs on the daiI y and weekly indicators. A year ago. we noted that breadth divergence signalled a market entering a mature phase. Twelve months later. that maturity has become old age. albeit. based on August action. a robust old age. That ageis. we think well worth keepmg in mind. ANTHONY W. TABELL Dow-Jones Industrials (1200 p.m.) 1217.42 DELAFIELD. HARVEY. TAB ELL INC. S & P Composite (1200 p.m.) 166.13 Cumulative Index (8/30/84) 2019.19 No statement or expression 01 Opinion Of any other mailer herem contained IS Of IS to be deemed to be, directly or Indirectly, an offer or the sollcltauon 01 an offer to buy or sell any secunly referred 10 or mentioned The matter IS presented merely lor the convemence 01 the subSCriber While we believe the sources of our mimmation to be reliable, we m no way represent or guarantee the accuracy thereol nor 01 the statements made herein Any action to be taken by the subSCriber should be based on hiS own investigation and Information Delafteld, Harvey, Tabell Inc, as a corpora lion and Its officers or employees, may now have, or may later take poSitions or trades In respect to any securrtles mentioned In this or any tuture Issue, and such pOSition may be different from any views nowor heleafter expressed In thiS or any other Issue Delafield Harvey Tabetl Inc which IS registered Wllh the SEC as an Investment adVisor, may give adVice 10 liS Investment adliisory and other customers mdependently of any statements made In thiS or In any olher Issue Further Information on any security mentioned herein IS available on request