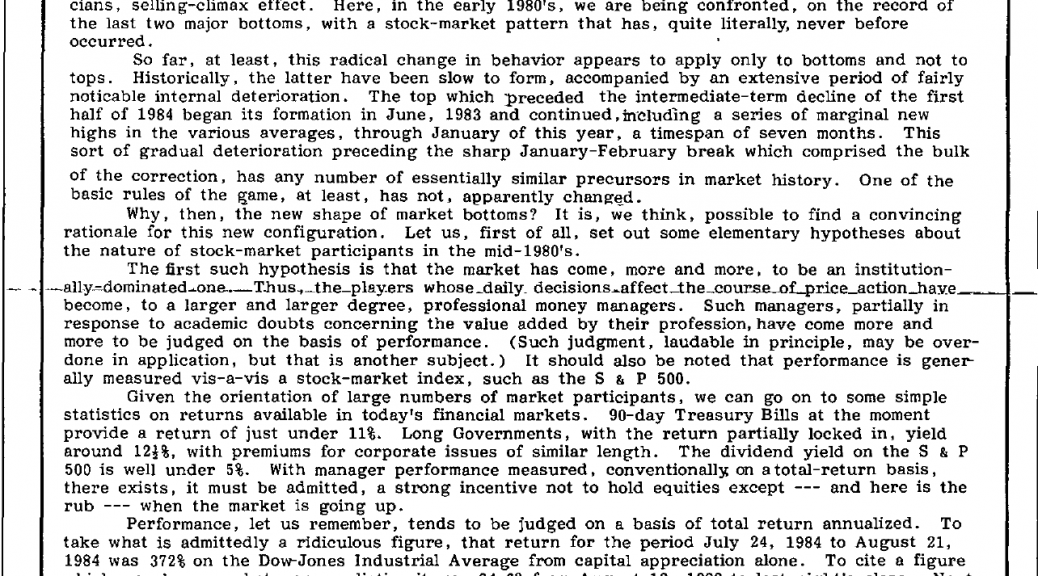 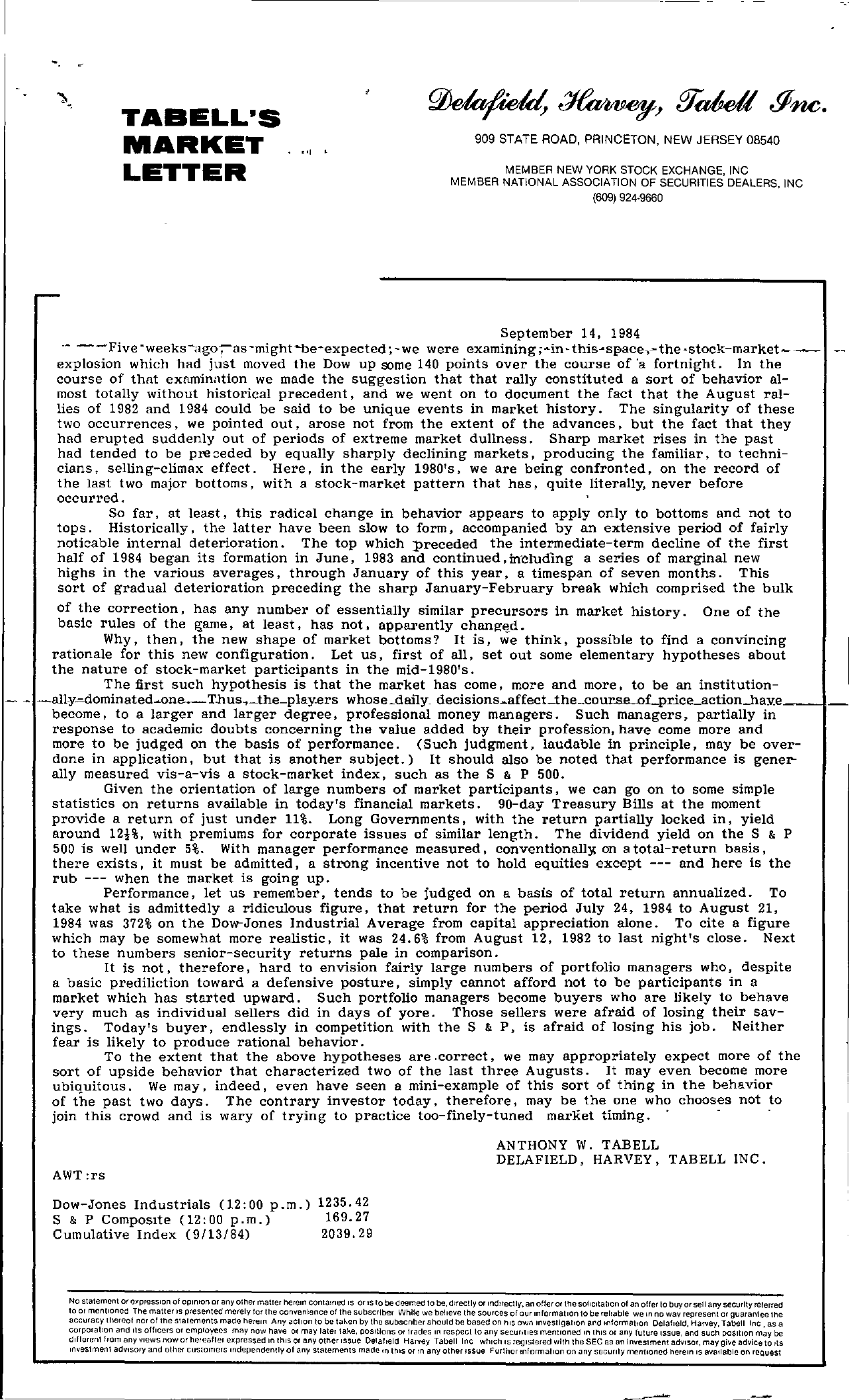 -. TABELL'S MARKET LETTER 909 STATE ROAD, PRINCETON, NEW JERSEY 08540 MEMBER NEW YORK STOCK EXCHANGE, INC MEMBER NATIONAL ASSOCIATION OF SECURITIES DEALERS, INC (609) 9249660 September 14, 1984 .- –Five 'weeks-agoas -might-be-expected; we were examining ;-inthis-space,the stock-market-explosion which had just moved the Dow up some 140 points over the course of'a fortnight. In the course of that examination we made the suggestion that that rally constituted a sort of behavior almost totally without historical precedent, and we went on to document the fact that the August rallies of 1982 and 1984 could be said to be unique events in market history. The singularity of these two occurrences, we pointed out, arose not from the extent of the advances, but the fact that they had erupted suddenly out of periods of extreme market dullness, Sharp market rises in the past had tended to be preoeded by equally sharply declining markets, producing the familiar, to technicians, selling-climax effect. Here, in the early 1980's, we are being confronted, on the record of the last two major bottoms, with a stock-market pattern that has, quite literally, never before occurred. So far, at least, this radical change in behavior appears to apply only to bottoms and not to tops. Historically, the latter have been slow to form, accompanied by an extensive period of fairly noticable internal deterioration. The top which preceded the intermediate-term decline of the first half of 1984 began its formation in June, 1983 and continued,irrCludlng a series of marginal new highs in the various averages, through January of this year, a timespan of seven months. This sort of gradual deterioration preceding the sharp January-February break which comprised the bulk of the correction, has any number of essentially similar precursors in market history. One of the basic rules of the game, at least, has not, apparently changd. Why, then, the new shape of market bottoms It is, we think, possible to find a convincing rationale for this new configuration, Let us, first of all, set out some elementary hypotheses about the nature of stock-market participants in the mid-1980's. The first such hypothesis is that the market has come, more and more, to be an institution- – -allydominatedone..T.hus,theplay.ers whose.daily. decisionsaffectthecourse….oLpriceactionhave – I become, to a larger and larger degree, professional money managers. Such managers, partially in response to academic doubts concerning the value added by their profession, have come more and more to be judged on the basis of performance. (Such judgment, laudable in principle, may be overdone in application, but that is another subject.) It should also be noted that performance is generally measured vis-a-vis a stock-market index, such as the S & P 500. Given the orientation of large numbers of market participants, we can go on to some simple statistics on returns available in today's financial markets. 90-day Treasury Bills at the moment provide a return of just under 11. Long Governments, with the return partially locked in, yield around 12H, with premiums for corporate issues of similar length. The dividend yield on the S & P 500 is well under 5. With manager performance measured, conventionall)l on a total-return basis, there exists, it must be admitted, a strong incentive not to hold equities except — and here is the rub — when the market is going up. Performance, let us remember, tends to be judged on a basis of total return annualized. To take what is admittedly a ridiculous figure, that return for the period July 24, 1984 to August 21, 1984 was 372 on the Dow-Jones Industrial Average from capital appreciation alone. To cite a figure which may be somewhat more realistic, it was 24.6 from August 12, 1982 to last night's close. Next to these numbers senior-security returns pale in comparison. It is not, therefore, hard to envision fairly large numbers of portfolio managers who, despite a basic prediliction toward a defensive posture, simply cannot afford not to be participants in a market which has started upward. Such portfolio managers become buyers who are likely to behave very much as individual sellers did in days of yore, Those sellers were afraid of losing their savings. Today's buyer, endlessly in competition with the S & P, is afraid of losing his job. Neither fear is likely to produce rational behavior. To the extent that the above hypotheses are ,correct, we may appropriately expect more of the sort of upside behavior that characterized two of the last three Augusts. It may even become more ubiquitous, We may, indeed, even have seen a mini-example of this sort of thing in the behavior of the past two days. The contrary investor today, therefore, may be the one who chooses not to join this crowd and is wary of trying to practice too-finely-tuned marKet timing. . AWTrs Dow-Jones Industrials (1200 p.m.) 1235.42 S & P ComposIte (1200 p.m.) 169.27 Cumulative Index (9/13/84) 2039.29 ANTHONY W. TABELL DELAFIELD, HARVEY, TAB ELL INC. No statement or f)ypresslon of opinion or any other matter herem contained 15 or IS to be deemed to be, directly or indirectly, an offer Of the solicitation of an offer to buy orsell any security relerred 10 or mentioned The matter IS presented merely lor Ihe convenience of the subscriber While we believe Ihe sources of our information to be reliable we in no Way represent or gutrantee the accuracy tllereol nor 01 the statements made herein Any tClion to be lah.en by the subscllber shOUld be based on hiS own Investlgahon and Informalton Delafield, Harvey, Tabell Inc, as a corporahon and liS officers or cmployeos my now htve or may later lake, pOSitions or IradC's In respect to any Securities mentioned In thiS or tny future Issue, and such pOSition mty be dlfterent flam any views nowO! herealter expressed In thiS or any other Issue Delafield Harvey Tabell Inc which IS regrstered with the SEC as an Inveslmenl adVisor, may give advice to Its Investment adVISOry and other customers Independently of any statements made tn thiS Ol!fl any other Issue Further mformatlon on any secuflty mentioned herern IS available on request