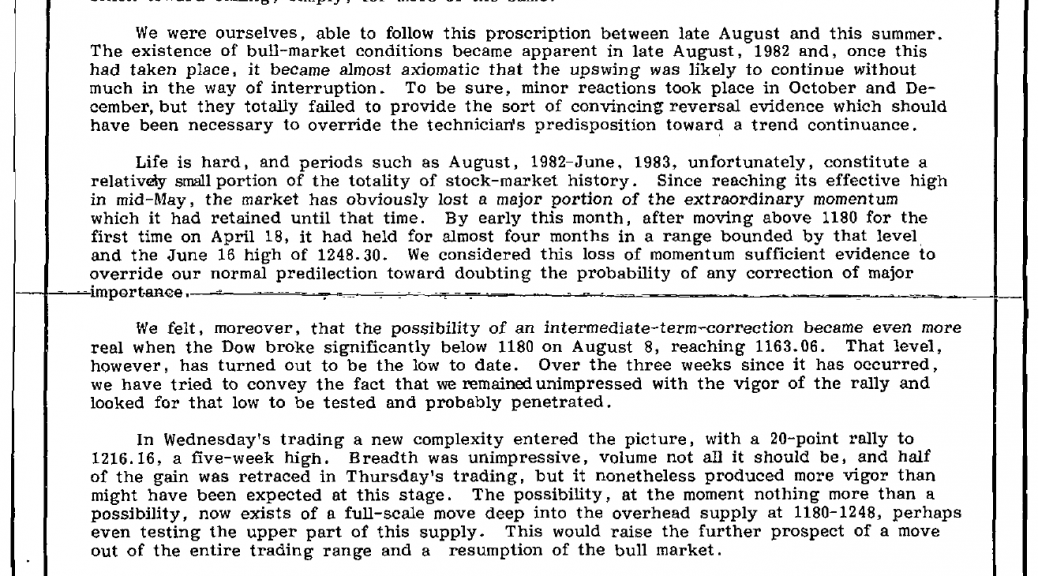 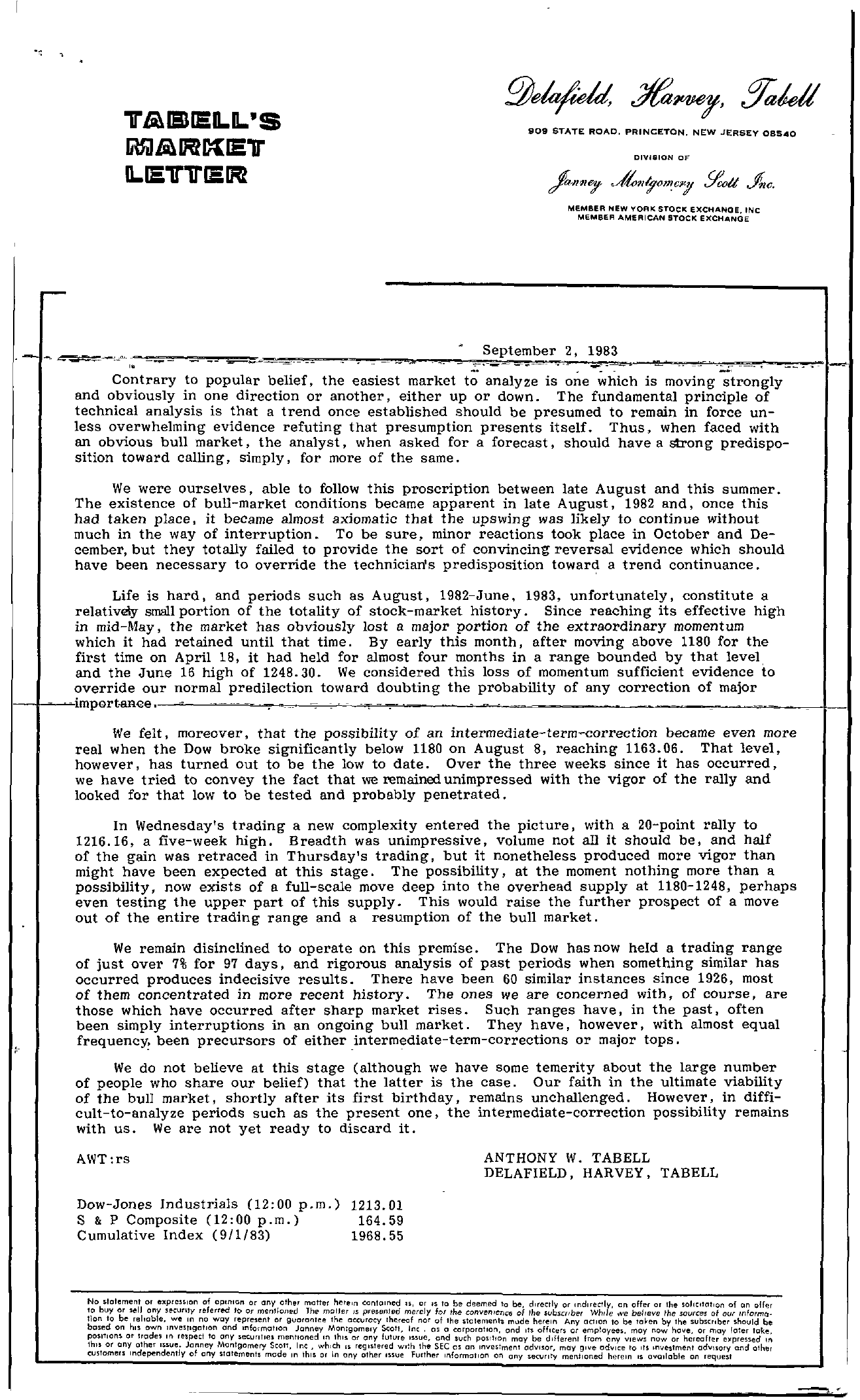 'V'&\IBUER..R..' S IiUiI&\R &t1E'V' LIE'V''V'IER 909 STATE ROAO, PRINCETON. NEW JERSEY 08S40 DIVISION OF MEMBER NEW YORK STOCk EXCHANGE, INC MEMBER AMERICAN STOCI( EXCHANGE .-…,.-..,,….,'.,.,,.-….,….,…..,,..,,,….,,,…,,,…,…..,,-s;ept;;e,m;ber2…;;.;3.,…–.'-',..,.,,..,–,,.,-I Contrary to popular belief. the easiest market to analyze is o,e ;;'hich is moving strongly and obviously in one direction or another. either up or down. The fundamental principle of technical analysis is that a trend once established should be presumed to remain in force un less overwhelming evidence refuting that presumption presents itself. Thus. when faced with an obvious bull market. the analyst. when asked for a forecast. should have a Strong predispo sition toward calling. simply. for more of the same. We were ourselves, able to follow this proscription between late August and this summer. The existence of bull-market conditions became apparent in late August, 1982 and, once this had taken place. it became almost axiomatic that the upswing was likely to continue without much in the way of interruption. To be sure. minor reactions took place in October and December. but they totally failed to provide the sort of convincing reversal evidence which should have been necessary to override the technician'S predisposition toward a trend continuance. Life is hard. and periods such as August. 1982-June. 1983. unfortunately. constitute a relatively small portion of the totality of stockmarket history. Since reaching its effective high in mid-May. the market has obviously lost a major portion of the extraordinary momentum which it had retained until that time. By early this month. after moving above 1180 for the first time on April 18. it had held for almost four months in a range bounded by that level and the June 16 high of 1248.30. We considered this loss of momentum sufficient evidence to override our normal predilection toward doubting the probability of any correction of major . I—importance —- I We felt. moreover. that the possibility of an intermediate-term-correction became even more real when the Dow broke significantly below 1180 on August 8. reaching 1163.06. That level, however, has turned out to be the low to date. Over the three weeks since it has occurred, we have tried to convey the fact that we remained unimpressed with the vigor of the rally and looked for that low to be tested and probably penetrated. In Wednesday's trading a new complexity entered the picture. with a 20-point rally to 1216.16. a five-week high. Breadth was unimpressive. volume not all it should be. and half of the gain was retraced in Thursday's trading, but it nonetheless produced more vigor than might have been expected at this stage. The possibility. at the moment nothing more than a possibility. now exists of a full-scale move deep into the overhead supply at 1180-1248, perhaps even testing the upper part of this supply. This would raise the further prospect of a move out of the entire trading range and a resumption of the bull market. We remain disinclined to operate on this premise. The Dow has now held a trading range of just over 7 for 97 days. and rigorous analysis of past periods when something similar has occurred produces indecisive results. There have been 60 similar instances since 1926. most of them concentrated in more recent history. The ones we are concerned with. of course, are those which have occurred after sharp market rises. Such ranges have. in the past, often been simply interruptions in an ongoing bull market. They have, however, with almost equal frequency, been precursors of either intermediate-term-corrections or major tops. We do not believe at this stage (although we have some temerity about the large number of people who share our belief) that the latter is the caSe. Our faith in the ultimate viability of the bull market, shortly after its first birthday, remains unchallenged. However, in difficult-to-analyze periods such as the present one. the intermediate-correction possibility remains with us. We are not yet ready to discard it. AWTrs ANTHONY W. TABELL DELAFIELD. HARVEY, TABELL Dow-Jones Industrials (1200 p.m.) 1213.01 S & P Composite (1200 p.m.) 164.59 Cumulative Index (9/1/83) 1968.55 No stotement or flxpreu,on of op'nion or any other motter here'n contolned IS, or IS to be deemed to be, directly or indirectly, on offer or Ihe SOliCitation of an offer 10 buy or sell any security referred It or mentIoned The motler IS presented merely for the conve,en of the !Ub!Cflber While Ne believe the lources of our In/armotlon 10 be relloble, we In no way represent or guarantee the accuracy Ihreof nor of Ihe s!olemenl mude herein Any adlon to be toen by the subSCriber should be bosed on hiS own InveSligotlon and InfOrmotlon Janney Montgomery Scott, Inc, as a corporation, ond Its offiCers or employees, may now have, or mol' later lokI.', POSitionS Of trodes In retpect 10 any seCUflllel mel1tloned In Ihls or any future Issue, ond such pOSitIOn may be different from ony views now or hereafter epressed In Iha or any ather Issue. Janney Montgomery Scott, Inc, which IS registered With the SEC as on Investment adVisor, may give adVice to 115 Investment adVISory and othel customers Independelllly of any statements mode In thiS or In any other luue Further Information on any seomly mentioned herem IS aVQlloble on request