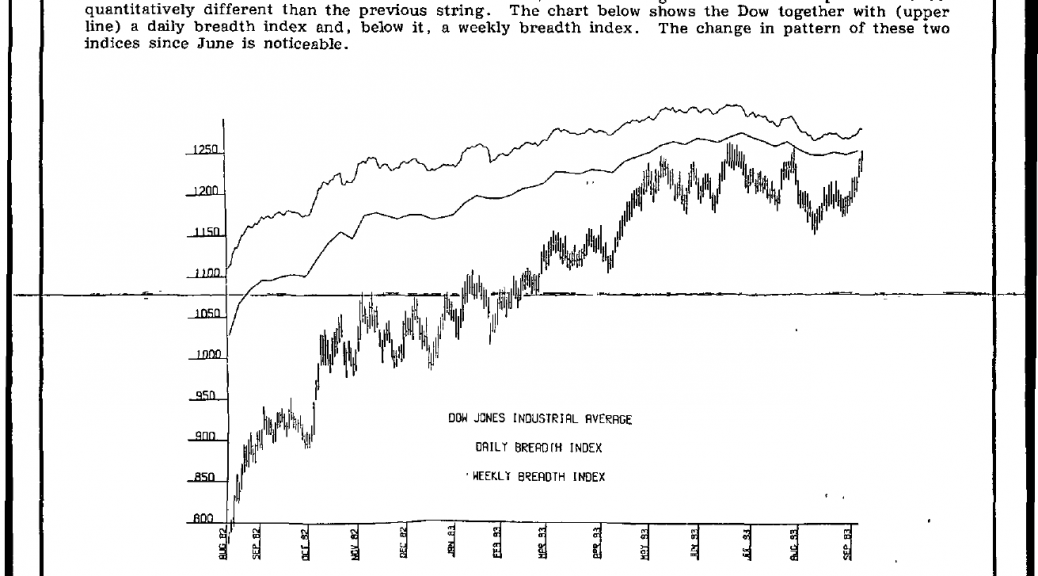 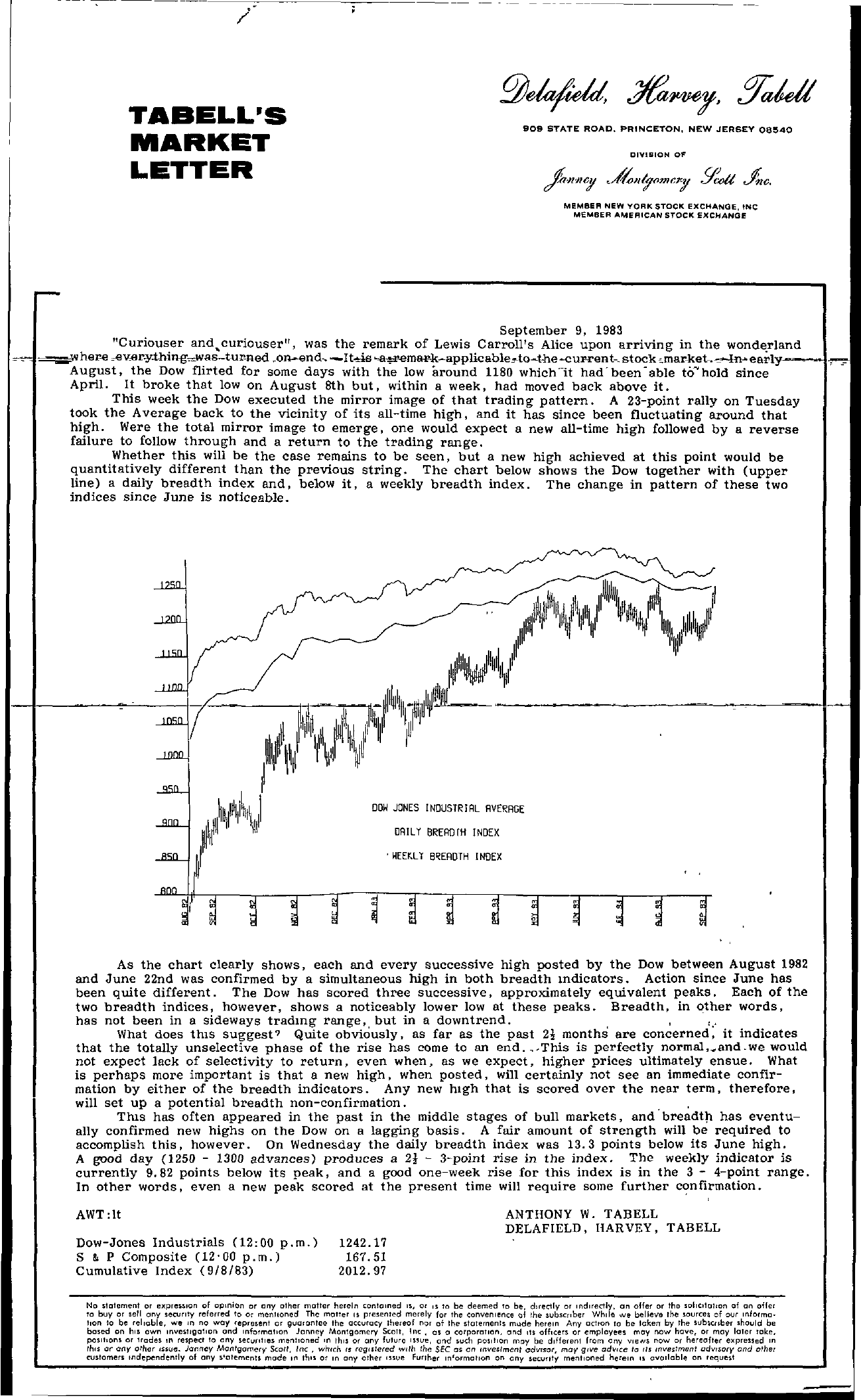 — – – – – ; ; – – – – – – – ; – – – – – – – – – – / – — — – – – – – – – – – – TABELL'S MARKET LETTER 909 STATE ROAD. PRINCETON. NEW JERSEY OB!540 DIVISION OF' MEMBER NEW YORI( STOCK EXCHANGe, INC MEMBER AMERICAN STOCK ECCJ.jANOe September 9, 1983 Curiouser and,curiouser, was the remark of Lewis Carroll's Alice upon arriving in the wonde.rland wher-e ,eV9r.y.thin.gw.as.-t-ur-ned ron–end.. – It.4s .a….ema-kapplicable.-to–t..,he …cup-rent-. stock mar-ket-.—ln earlY'—I August, the Dow flirted for some days with the low around 1180 which-it had-been-able tohold since April. It broke that low on August 8th but, within a week, had moved back above it. This week the Dow executed the mirror image of that trading pattern. A 23-point rally on Tuesday took the Average back to the vicinity of its all-time high, and it has since been fluctuating around that high. Were the total mirror image to emerge, one would expect a newall-time high followed by a reverse failure to follow through and a return to the trading range. Whether this will be the case remains to be seen, but a new high achieved at this point would be quantitatively different than the previous string. The chart below shows the Dow together with (upper line) a daily breadth index and, below it, a weekly breadth index. The change in pattern of these two indices since June is noticeable. DOW JONES INDUSTRIAL AVERAGE OAILY BREAD!H INDEX . WEEKLY BEAOTH INDEX As the chart clearly shows, each and every successive high posted by the Dow between August 1982 and June 22nd was confirmed by a simultaneous high in both breadth mdicators. Action since June has been quite different. The Dow has scored three successive, approximately equivalent peaks. Each of the two breadth indices, however, shows a noticeably lower low at these peaks. Breadth, in other words, has not been in a sideways tradIng range but in a downtrend. I., What does thIS suggest Quite obviously. as far as the past 2! months are concerned, it indicates that the totally unselective phase of the rise has come to an end. This is perfectly normal ….. andwe would not expect lack of selectivity to return, even when, as we expect higher prices ultimately ensue. What is perhaps more important is that a new high, when posted, will certainly not see an immediate confir- mation by either of the breadth indicators. Any new hIgh that is scored over the near term, therefore, will set up a potential breadth non-confirmation. Thls has often appeared in the past in the middle stages of bull markets, and -breadtp has eventu- ally confirmed new highs on the Dow on a lagging basis. A fair amount of strength will be required to accomplish this, however. On Wednesday the daily breadth index was 13.3 pOints below its June high. A good day (1250 – 1300 advances) produces a 2! – 3-point rise in the index. The weekly indicator is currently 9.82 points below its peak, and a good one-week rise for this index is in the 3 – 4-point range. In other words. even a new peak scored at the present time will require some further confirmation. AWT It Dow-Jones Industrials (12 00 p. m.) S & P Composite (12'00 p.m.) Cumulative Index (9/8/83) 1242.17 167.51 2012.97 ANTHONY W. TABELL DELAFIELD, lIARVEY, TABELL No statement or expression of opInion or any ather matter herein contained 15, or IS to be deemed 10 be, dneclly or ,nd,rectly, an offer or Ihe 50llc,tollon of an offer 10 buy or sell any scomly referred to or menhoned The moIler IS presented merely for Ihe convenience of the subscflber While we believe the source of our mforma lIon to be relIable, we 1f1 no way represent or guarantee Ihe accuracy thereof nor of the statemenls mude herein Any actIon 10 be taken by the Sub1crlber should be based on h,s own investigatIon and Informahon Janney Montgomery SCali, Inc, as a corporal lon, and 115 offICers or employees may now have, or may laler lake, poslhOM or trades In respect to any seCUritIes mentioned In thIS or any future Issue, and such pasdlon may be dIfferent from any vle ….s now or hereafter expreSSed In thiS or any other Issue. Janney Montgomery Scort, Inc, which 1 registered wtlh the SEC as on Investment adVisor, may give adVice 10 11 Investment adVISOry and athe! customer5 Independently of cny s'clemenlS made If' Ihn or m ony other Issue Further In'ormallon on ony securlly menlloned herem 15 avollable on reque1