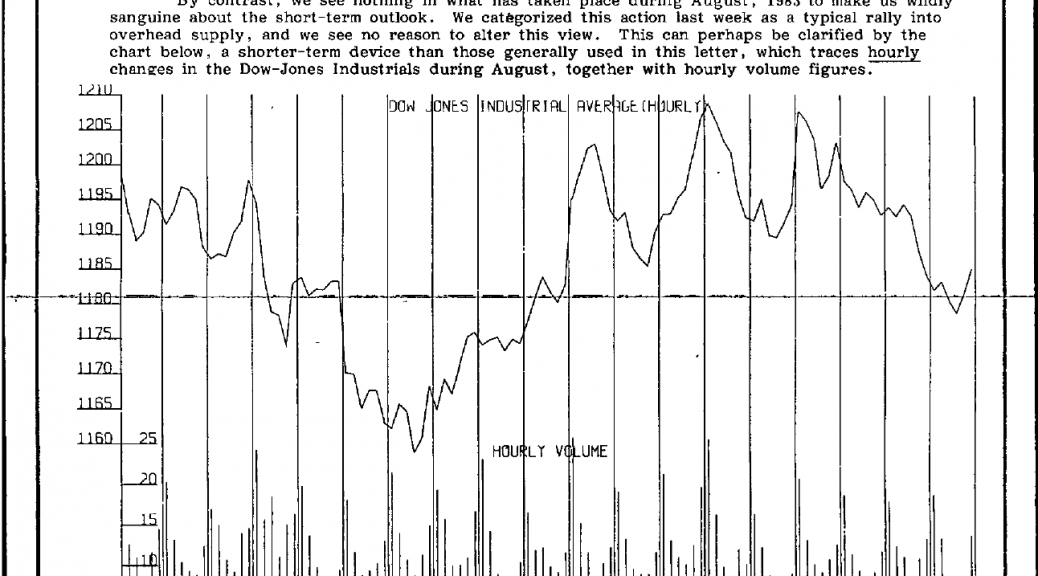 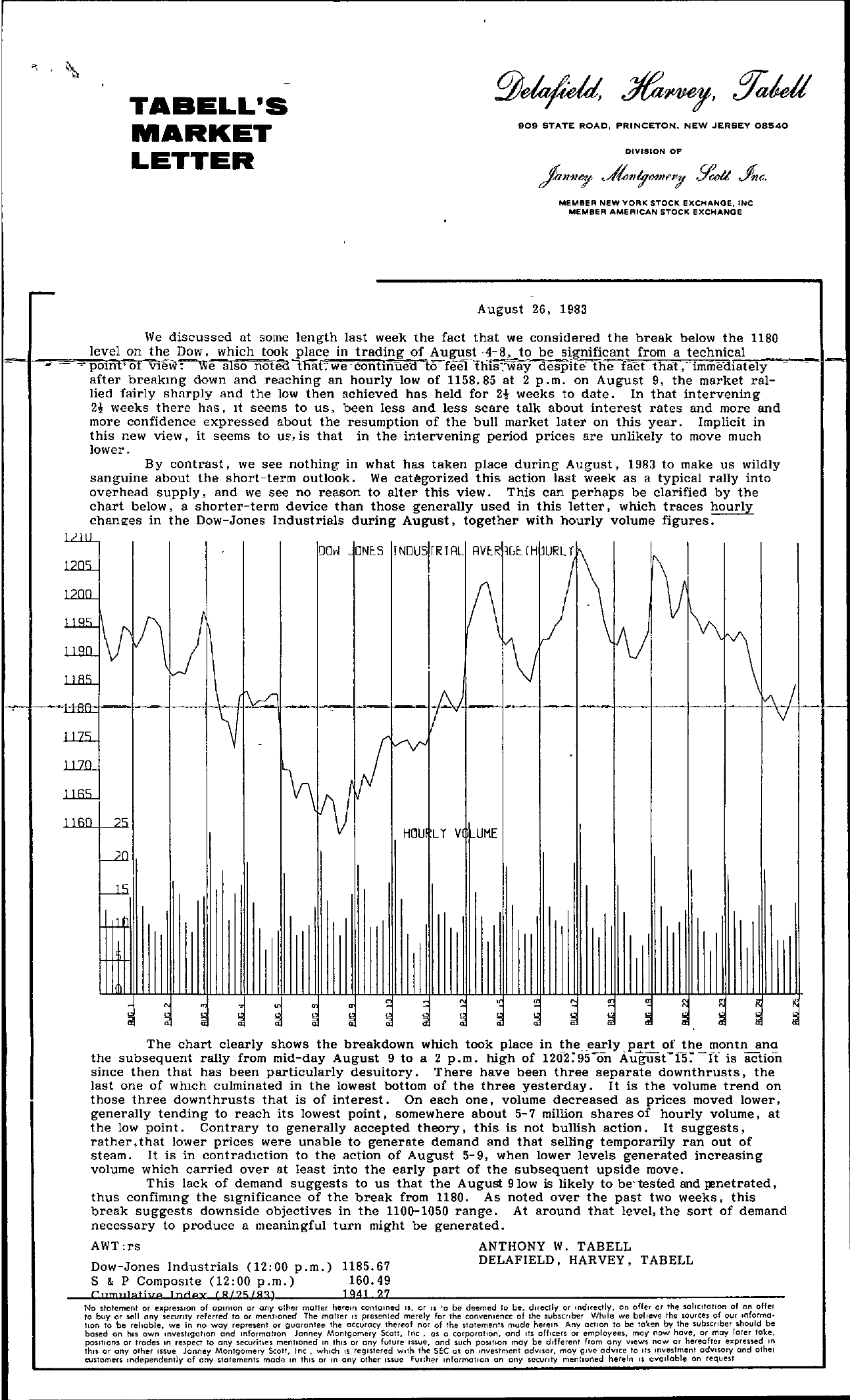 TABELL'S MARKET LETTER 909 STATE ROAC, PRINCETON. NEW JERSEY 08540 DIVISION OF MEMBER NEW YORK STOCK EXCHANOE, INC MEMBER AMERICAN STOCK EXCHANGE August 26, 1983 We discussed at some length last week the fact that we considered the break below the 1180 level on the Dow, which took place in trading of August 4-8, to be sigtlificant from a technical ,- – pomt' of VlewWe also noteutnat'we 'contmuetl tofeerlhis-way despite' thefact thaI ,immeQlr'a't-ely-'–I after breakmg down and reaching an hourly low of 1158.85 at 2 p. m. on August 9, the market rallied fairly sharply and the low then achieved has held for 2! weeks to date. In that intervening 2! weeks there has. It seems to us. been less and less scare talk about interest rates and more and more confidence expressed about the resumption of the bull market later on this year. Implicit in this new view, it seems to UE', is that in the intervening period prices are unlikely to move much lower. By contrast, we see nothing in what has taken place during August, 1983 to make us wildly sanguine about the short-term outlook. We categorized this action last week as a typical rally into overhead supply, and we see no reason to alter this view. This can perhaps be clarified by the chart below, a shorter-term device than those generally used in this letter, which traces hourly chanees in the Dow-Jones Industrials during August, together with hourly volume figures. DOw ONE.S VI / /v ; d The chart clearly shows the breakdown which took place in the early part of the montn ana the subsequent rally from mid-day August 9 to a 2 p.m. high of 1202!iS-on AUgUst-rs-ri is action since then that has been particularly desultory. There have been three separate downthrusts, the last one of WhICh culminated in the lowest bottom of the three yesterday. It is the volume trend on those three downthrusts that is of interest. On each one, volume decreased as prices moved lower, generally tending to reach its lowest point, somewhere about 5-7 million shares of hourly volume, at the low point. Contrary to generally accepted theory, this is not bullish action. It suggests, rather, that lower prices were unable to generate demand and that selling temporarily ran out of steam. It is in contradIction to the action of August 5-9, when lower levels generated increasing volume which carried over at least into the early part of the subsequent upside move. This lack of demand suggests to us that the August 9 low is likely to be'tested and pmetrated, thus confimmg the SIgnificance of the break from 1180. As noted over the past two weeks, this break suggests downside objectives in the 1100-1050 range. At around that level, the sort of demand necessary to produce a meaningful turn might be generated. AWTrs Dow-Jones Industrials (1200 p.m.) S & P ComposIte (1200 p.m.) c 11muJ stive J pdex (8 (25 (83) ANTHONY W. TABELL 1185.67 DELAFIELD, HARVEY, TABELL 160.49 1 94L. .27L No slatemenl or expressIon of op'nion or any ather maNer hereIn contolned IS, or,s '0 be deemed 10 be, directly or IndIrectly, on offer or Ihe solICItatIon of on offer to buy or sell any security referred 10 or menlloned The molter IS presented merely for the convenIenCE of the subscnber While we belIeve the sources of ovr Informa Iton 10 be reliable, we In no way represenl or guarantee the accuracy thereof nor of the statements mude herein Any OClian 10 be token by Ihe subscflber should be based on h,s own InvestigatIon and Informallon Janney Montgomery Scali, Inc, as a corporatIon, and Its offIcers or employees, may now have, or may taler toke, poSItions or trodes In respect to any securilles menhoned In thIS or any future Issue, and such pos,hon may be d,fferent from any v,ews now or hereafter expressed In ThIS or any olher Issue Jonney Montgomery 5011, tnc , which 15 registered WIth the SEC as on ,nvestment adVIsor, may gIve adVice to ,Is ,vestment adVISOry and othel customers Independently of any statements made In th,s or ' any OTher lSue Furlher information on any security menlloned heretn IS available on request