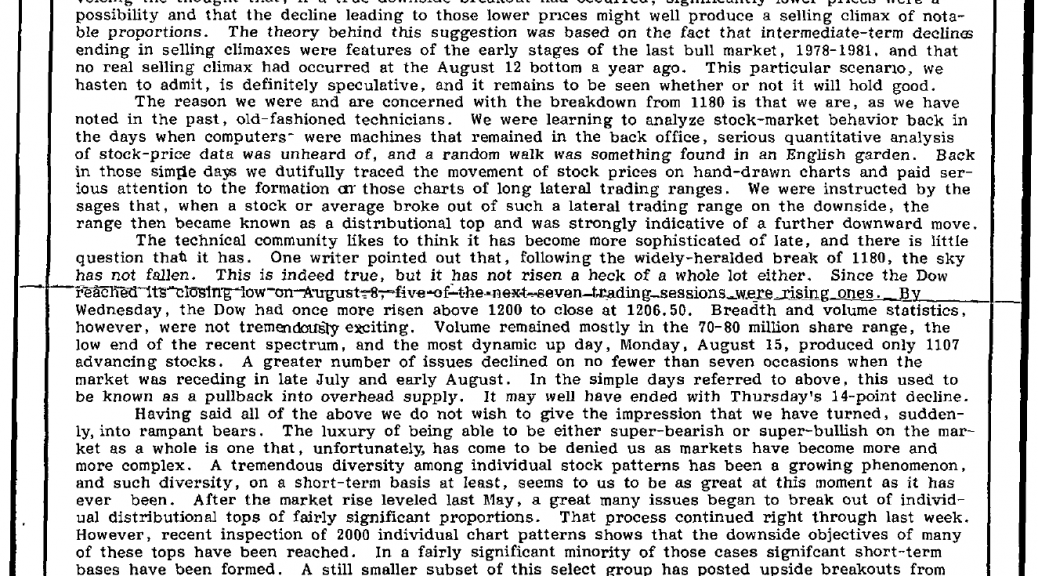 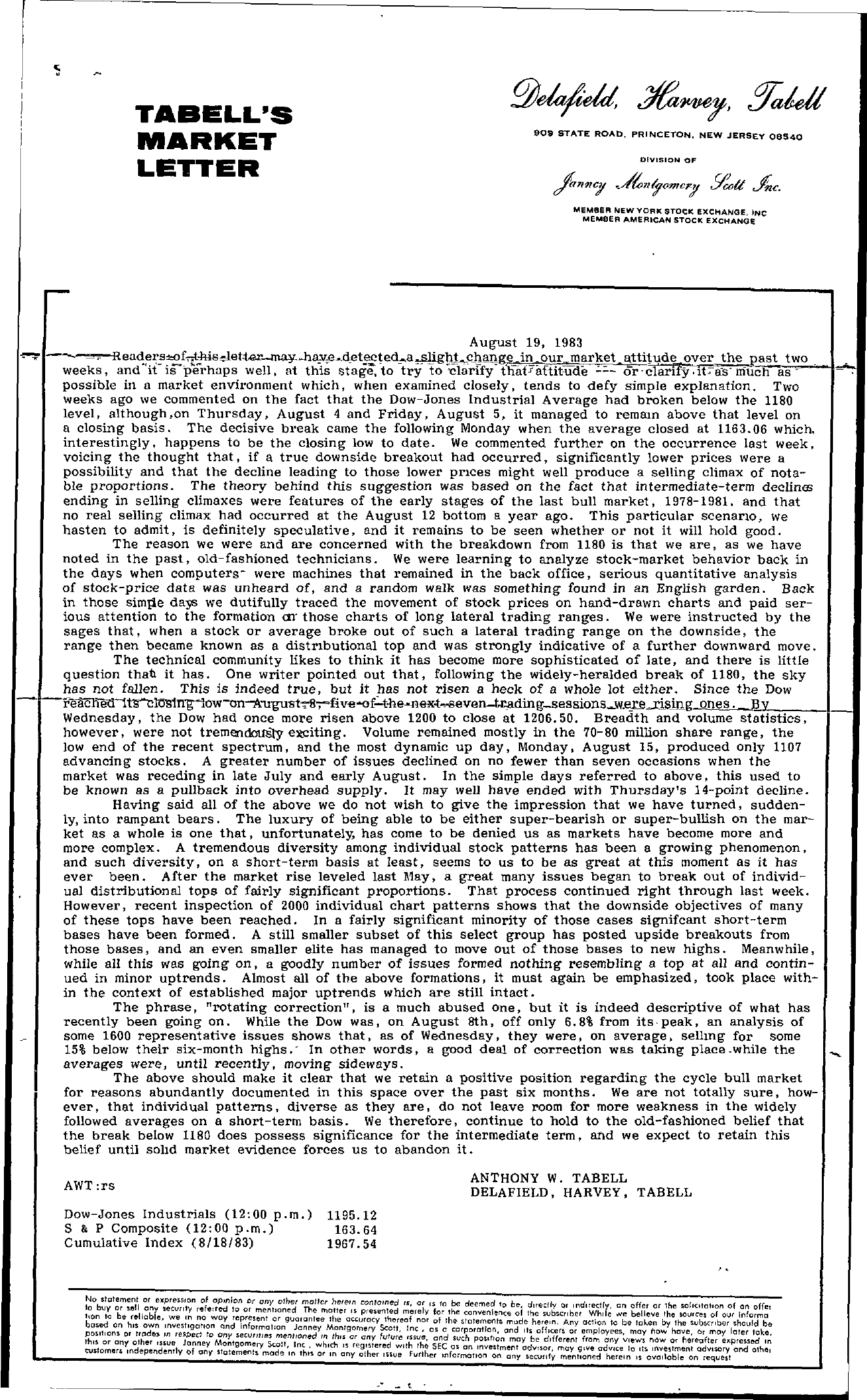 TABELL'S MARKET LETTER 909 STATE ROAb, PRINCETON, NEW JERSEY OB540 DIVISION OF MEMBER NEW YORK STOCK EXCHANGE, INC MEMBER AMERICAN STOCK EXCHANGe August 19, 1983 .,.,. – – – Rear.2..f-hisdet.t-may.-haY,eetted,a,Jljghl!,Jpg.e in. our market attitude over the past two weeks, and it is perhaps well, at this stage,to try to clarify thatraftit-uae – orclarily.,t. as much as possible in a market environment which, when examined closely, tends to defy simple explanation. Two weeks ago we commented on the fact that the Dow-Jones Industrial Average had broken below the 1180 level, although,on Thursday, August 4 and Friday, August 5, it managed to remam above that level on a closing basis. The decisive break came the following Monday when the average closed at 1163.06 which. interestingly, happens to be the closing low to date. We commented further on the occurrence last week, voicing the thought that, if a true downside breakout had occurred, significantly lower prices were a possibility and that the decline leading to those lower prIces might well produce a selling climax of notable proportions. The theory behind this suggestion was based on the fact that intermediate-term declines ending in selling climaxes were features of the early stages of the last bull market, 1978-1981. and that no real selling climax had occurred at the August 12 bottom a year ago. This particular scenario, we hasten to admit, is definitely speculative, and it remains to be seen whether or not it will hold good. The reason we were and are concerned with the breakdown from 1180 is that we are, as we have noted in the past, old-fashioned technicians. We were learning to analyze stock-market behavior back in the days when computers were machines that remained in the back office, serious quantitative analysis of stock-price data was unheard of, and a random walk was something found in an English garden. Back in those simIle days we dutifully traced the movement of stock prices on hand-drawn charts and paid serious attention to the formation Ir those charts of long lateral trading ranges. We were instructed by the sages that, when a stock or average broke out of such a lateral trading range on the downside, the range then became known as a distrIbutional top and was strongly indicative of a further downward move. The technical community likes to think it has become more sophisticated of late, and there is little question that! it has. One writer pointed out that, following the widely-heralded break of 1180, the sky has not fallen. This is indeed true, but it has not risen a heck of a whole lot either. Since the Dow -reacrreu,tsl!10'S1n-g4ow-on….A.ugust8;-fiv..f..;.the.fle.t…seven….tJ.adingsessionsw.ereJisJIlg ones. B,.yc;-;-;- Wednesday, the Dow had once more risen above 1200 to close at 1206.50. Breadth and volume statistics, however, were not tremendoUSly eltCiting. Volume remained mostly in the 70-80 million share range, the low end of the recent spectrum, and the most dynamic up day, Monday, August 15, produced only 1107 advancing stocks. A greater number of issues declined on no fewer than seven occasions when the market was receding in late July and early August. In the simple days referred to above, this used to be known as a pullback into overhead supply. It may well have ended with Thursday's 14-point decline. Having said all of the above we do not wish to give the impression that we have turned, suddenly, into rampant bears. The lUXUry of being able to be either super-bearish or super-bullish on the market as a whole is one that, unfortunately, has come to be denied us as markets have become more and more complex. A tremendous diversity among individual stock patterns has been a growing phenomenon, and such diversity, on a short-term basis at least, seems to us to be as great at this moment as it has ever been. After the market rise leveled last May, a great many issues began to break out of individual distributional tops of fairly significant proportions. That process continued right through last week. However, recent inspection of 2000 individual chart patterns shows that the downside objectives of many of these tops have been reached. In a fairly significant minority of those cases signifcant short-term bases have been formed. A still smaller subset of this select group has posted upside breakouts from those bases, and an even smaller elite has managed to move out of those bases to new highs. Meanwhile, while all this was going on, a goodly number of issues formed nothing resembling a top at all and continued in minor uptrends. Almost all of the above formations, it must again be emphasized, took place within the context of established major uptrends which are still intact. The phrase, rotating correction, is a much abused one, but it is indeed descriptive of what has recently been going on. While the Dow was, on August 8th, off only 6.8 from its-peak, an analysis of some 1600 representative issues shows that, as of Wednesday, they were, on average) sellrng for some 15 below their six-month highs.' In other words, a good deal of correction was taking place .while the averages were, until recently, moving sideways. The above should make it clear that we retain a positive position regarding the cycle bull market for reasons abundantly documented in this space over the past six months. We are not totally sure, however, that individual patterns, diverse as they are, do not leave room for more weakness in the widely followed averages on a short-term basis. We therefore, continue to hold to the old-fashioned belief that the break below 1180 does possess significance for the intermediate term, and we expect to retain this belief until solld market evidence forces us to abandon it. AWT rs Dow-Jones Industrials (1200 p.m.) 1195.12 S & P Composite (1200 p.m.) 163.64 Cumulative Index (8/18/83) 1967.54 ANTHONY W. TABELL DELAFIELD, HARVEY, TAB ELL