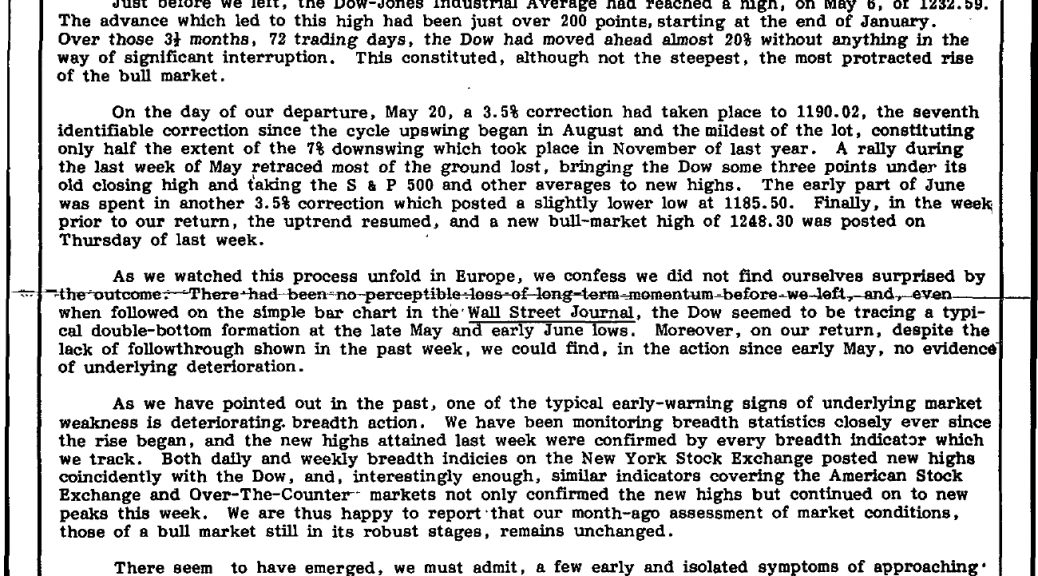 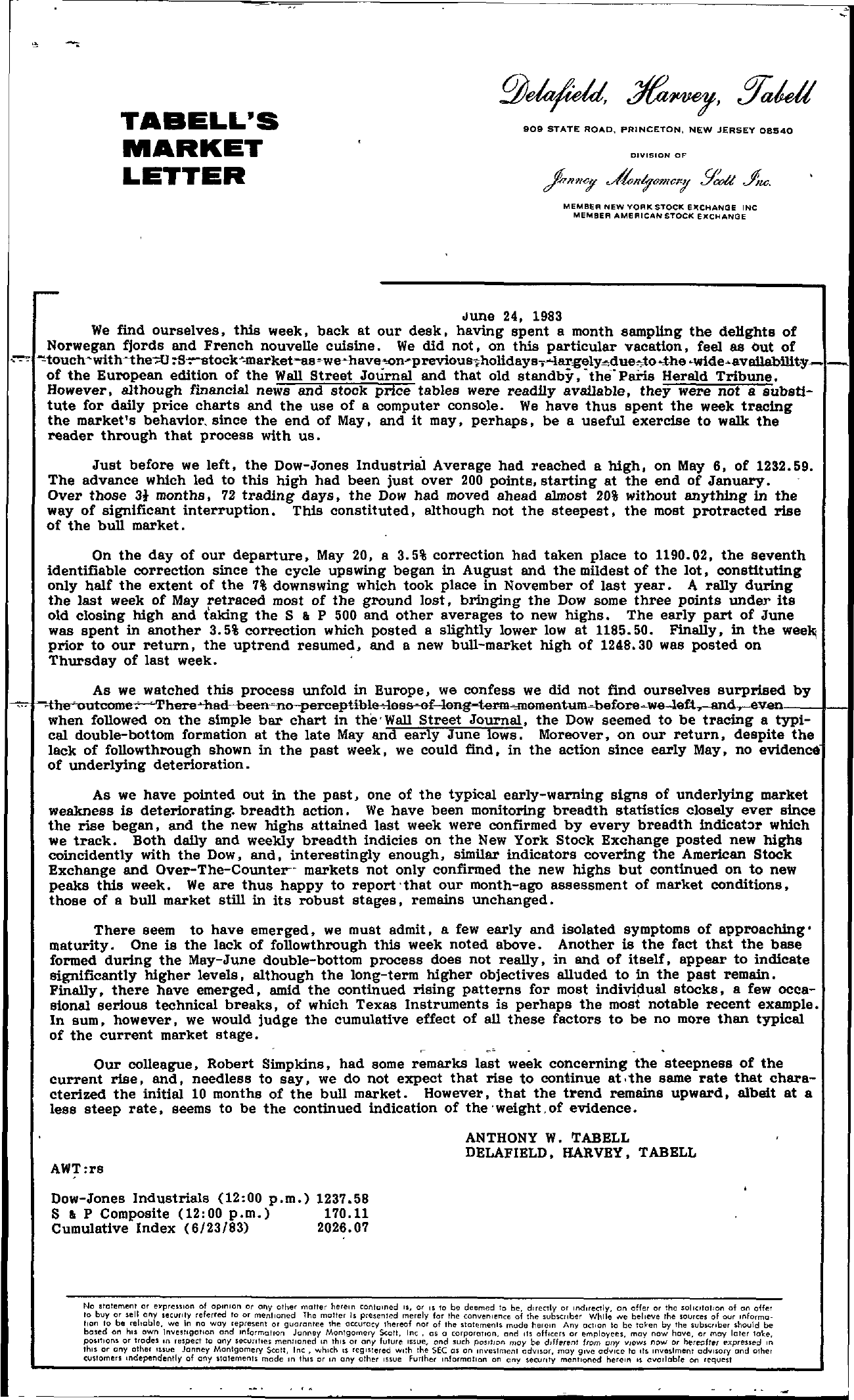 TABELL'S MARKET LETTER 909 STATE ROAD. PRINCETON, NEW JERSEY 08540 DIVISION OF MEMBeR NEW VORl( STOCK EM;CHANQE INC MElllllaEA AMERICAN STOCK EXCHANGE dune 24. 1983 We find ourselves. this week. back at our desk. having spent a month sampling the delights of Norwegan fjords and French nouvelle cuisine. We did not. on this particular vacation. feel as out of touch-with-theU ;-Stockmarket-as we-havenpreviousiholidays.-Iargelyuet04he –wide.availabillty of the European edition of the Wall Street Journal and that old standby. -the paris Herald Tribune. However. although financial news and stock pl'lce tables were readlly available. they were not a substitute for daily price charts and the use of a computer console. We have thus spent the week tracing the market's behavior, since the end of May. and it may. perhaps. be a useful exercise to walk the reader through that process with us. Just before we left. the Dow-Jones Industriai Average had reached a high, on May 6, of 1232.59. The advance which led to this high had been just over 200 points. starting at the end of January. Over those 3t months, 72 trading days. the Dow had moved ahead almost 20 without anything in the way of significant interruption. This constituted. although not the steepest. the most protracted rise of the bull market. On the day of our departure. May 20. a 3.5 correction had taken place to 1190.02. the seventh identifiable correction since the cycle upswing began in August and the mildest of the lot. constituting only half the extent of the 7 downswing which took place in November of last year. A rally during the last week of May retrsced most of the ground lost. bringing the Dow some three points under its old closing high and taking the S 110 P 500 and other averages to new highs. The early part of June was spent in another 3.5 correction which posted a slightly lower low at 1185.50. Finally, in the weelli prior to our return. the uptrend resumed, and a new bull-market high of 12018.30 was posted on Thursday of last week. As we watched this process unfold in Europe. we confess we did not fmd ourselves surprised by –, -…e'Outcomeherehsd been'nll pereeptible-4esfP-Gf-long-tel'lll-'llOmentum…before-we-left-,-and.,-ev.en-1 when followed on the simple bar chart in the'Wall Street Journal. the Dow seemed to be tracing a typical double-bottom formation at the late May and early June lows. Moreover. on our return. despite the lack of followthrough shown in the past week. we could find. in the action since early May. no evidence of underlying deterioration. As we have pointed out in the past, one of the typical early-warning signs of underlying market weakness is deteriorating. breadth action. We have been monitoring breadth statistics closely ever since the rise began. and the new highs attained last week were confirmed by every breadth indicatr which we track. Both daily and weekly breadth indicies on the New York Stock Exchange posted new highs coincidently with the Dow. and. interestingly enough. similar indicators covering the American Stock Exchange and Over-The-Counter– markets not only confirmed the new highs but continued on to new peaks this week. We are thus happy to report'that our month-ago assessment of market conditions. those of a bull market still in its robust stages. remains unchanged. There seem to have emerged. we must admit. a few early and isolated symptoms of approaching' maturity. One is the lack of followthrough this week noted above. Another is the fact thd the base formed during the Msy-June double-bottom process does not really. in and of itself. appear to indicste significantly higher levels. although the long-term higher objectives alluded to in the past remain. Finally. there have emerged. amid the continued rising patterns for most indivi!1ual stocks. a few occasional serious technical breaks. of which Texas Instruments is perhaps the most notable recent example. In sum. however. we would judge the cumulative effect of all these factors to be no more than typical of the current market stage. Our colleague. Robert Simpkins. had some remarks last week concerning the steepness of the current rise. and. needless to say. we do not expect that rise to continue at. the same rate that chara- cterized the initial 10 months of the bull market. However, that the trend remains upward, albeit at a less steep rate, seems to be the continued indication of the 'weighCof evidence. AWTrs ANTHONY W. TABELL DELAFIELD. HARVEY. TABELL Dow-Jones Industrials (1200 p.m.) 1237.58 S 110 P Composite (1200 p.m.) 170.11 Cumulative Index (6/23183) 2026.07 No statement or e)'preulon of opInion or any other motler herein COl'llelned 1, or 1510 be deemed to be, dHectly or indirectly, on oHer or the SOII(ltotion of an oHer to buy or sell ony security referred to or menlloned The meller Is presented merely for Ihe convenienCE of the subscriber While oNe believe tne sources of our Informetlon to be reliable, we In no way represent or guarantee the accuracy thereof nor of the statements mode herein Any OCI'on to be toen by the subscriber should be based on hiS own Inves/lgetlon ond mformatlon Jenney Montgomery Scali, Inc, as a corporation, end ,Is officers or employees, may now have, or may later toke, poIIOn!. or trades In respect to any secuntles mentioned In Ihl or any future Iue, and such position may be different flom any Views flOW or hereafter expressed In thiS or any other luue Janney Montgomery Scoll, Inc, whlCh 1 registered w,h the SEC as on Investment adVisor, may give advlI.e to ,15 Investment adVISOry and othe, customers Independently of any statements mode In thiS or In any alher Issue Further InForma/lon on any secunty men/lont!! herem IS available on request