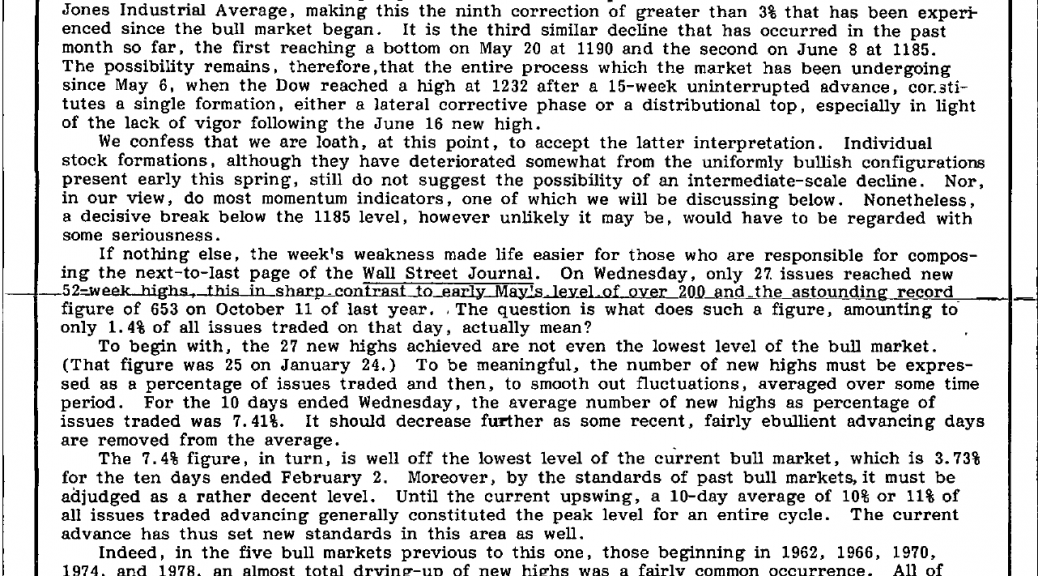 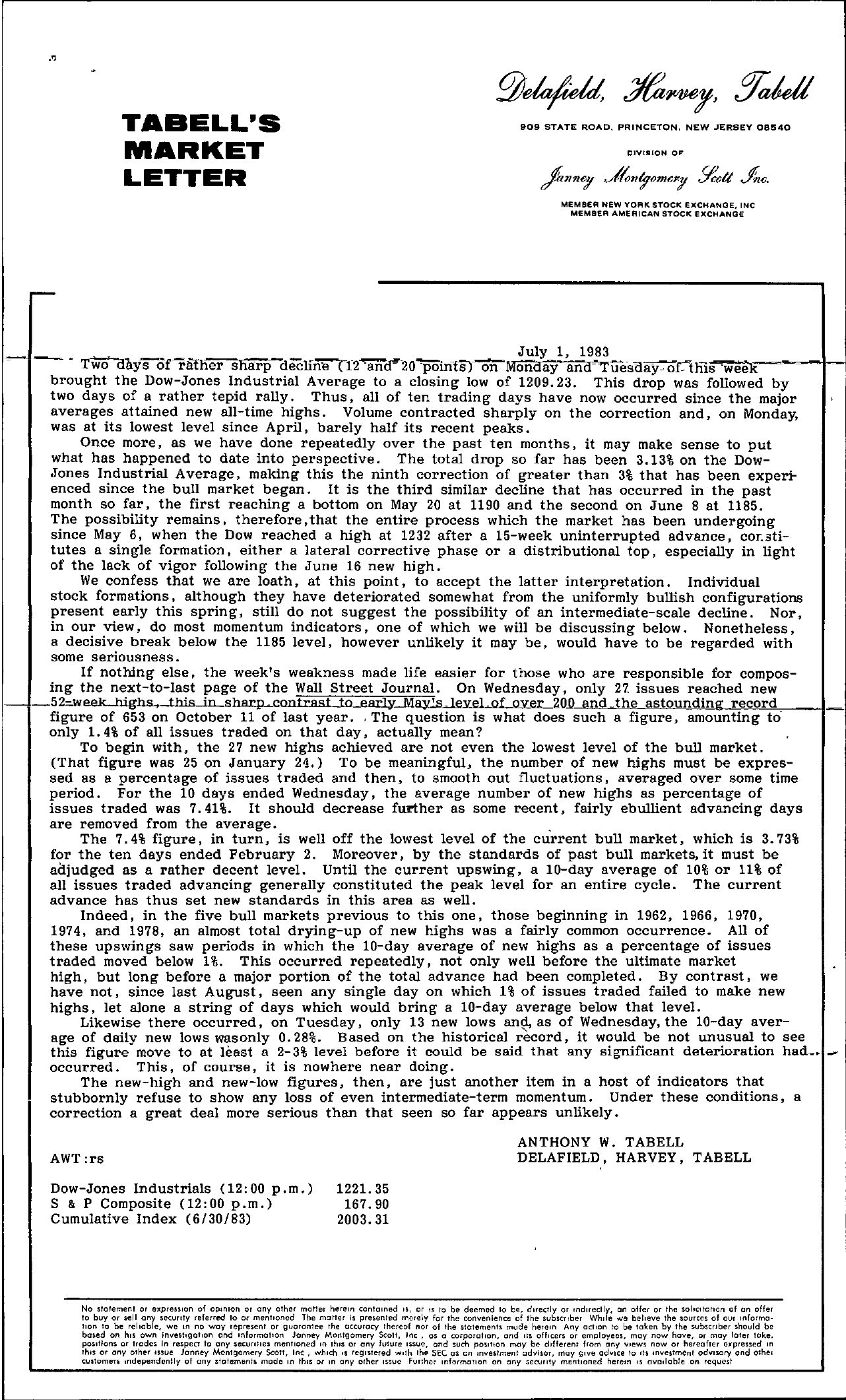 . TABELL'S MARKET LETTER 909 STATE ROAD, PRINCETON, NEW JERSEY 08540 DIVISION OF' MEMBER NEW YORK STOCK EXCHANGE, INC MEMBER AMERICAN STOCK eXCHANGE . July I, 1983 Two days ofratner sharp d.rclin 02 -an020pom1S)Ci't'lMOflclay andTuesaay. oftm.;s-week,;—–l brought the Dow-Jones Industrial Average to a closing low of 1209.23. This drop was followed by two days of a rather tepid rally. Thus, all of ten trading days have now occurred since the major averages attained newall-time highs. Volume contracted sharply on the correction and, on Monday, was at its lowest level since April, barely half its recent peaks. Once more, as we have done repeatedly over the past ten months, it may make sense to put what has happened to date into perspective. The total drop so far has been 3.13 on the Dow- Jones Industrial Average, making this the ninth correction of greater than 3 that has been experi- enced since the bull market began. It is the third similar decline that has occurred in the past month so far, the first reaching a bottom on May 20 at 1190 and the second on June 8 at 1185. The possibility remains, therefore, that the entire process which the market has been undergoing since May 6, when the Dow reached a high at 1232 after a 15-week uninterrupted advance, cor.3ti- tutes a single formation, either a lateral corrective phase or a distributional top, especially in light of the lack of vigor following the June 16 new high. We confess that we are loath, at this point, to accept the latter interpretation. Individual stock formations, although they have deteriorated somewhat from the uniformly bullish configurations present early this spring, still do not suggest the possibility of an intermediate-scale decline. Nor, in our view, do most momentum indicators, one of which we will be discussing below. Nonetheless, a decisive break below the 1185 level, however unlikely it may be, would have to be regarded with some seriousness. If nothing else, the week's weakness made life easier for those who are responsible for compos- ing the next-to-last page of the Wall Street Journal. On Wednesday, only 27. issues reached new – 52-weekJtighs..—.1bis in sharp….contrast to.-early-May-s..leyeLof oyer ZOJLlmd.the astounding record figure of 653 on October 11 of last year. ,The question is what does such a figure, amounting to- only 1. 4 of all issues traded on that day, actually mean To begin with, the 27 new highs achieved are not even the lowest level of the bull market. (That figure was 25 on January 24.) To be meaningfUl, the number of new highs must be expres- sed as a percentage of issues traded and then, to smooth out fluctuations, averaged over some time period. For the 10 days ended Wednesday, the average number of new highs as percentage of issues traded was 7.41. It should decrease further as some recent, fairly ebullient advancing days are removed from the average. The 7.4 figure, in turn, is well off the lowest level of the current bull market, which is 3.73 for the ten days ended February 2. Moreover, by the standards of past bull markets, it must be adjudged as a rather decent level. Until the current upswing, a 10-day average of 10 or 11 of all issues traded advancing generally constituted the peak level for an entire cycle. The current advance has thus set new standards in this area as well. Indeed, in the five bull markets previous to this one, those beginning in 1962, 1966, 1970, 1974, and 1978, an almost total drying-up of new highs was a fairly common occurrence. All of these upswings saw periods in which the 10-day average of new highs as a percentage of issues traded moved below 1. This occurred repeatedly, not only well before the Ultimate market high, but long before a major portion of the total advance had been completed. By contrast, we have not, since last August, seen any single day on which 1 of issues traded failed to make new highs, let alone a string of days which would bring a 10-day average below that level. Likewise there occurred, on Tuesday, only 13 new lows anl, as of Wednesday, the 10-day aver- age of daily new lows wasonly 0.28. Based on the historical record, it would be not unusual to see this figure move to at least a 2- 3 level before it could be said that any significant deterioration had. occurred. This, of course, it is nowhere near doing. The new-high and new-low figures, then, are just another item in a host of indicators that stubbornly refuse to show any loss of even intermediate-term momentum. Under these conditions, a correction a great deal more serious than that seen so far appears unlikely. AWT rs ANTHONY W. TABELL DELAFIELD, HARVEY, TABELL Dow-Jones Industrials (12 00 p.m.) S 8. P Composite (12 00 p.m.) Cumulative Index (6/30/83) 1221. 35 167.90 2003.31 No slatement or expreulon of opmlon or any other motler heft' In contOlned IS, or IS to be deemed 10 be, directly or indirectly, on offer or the Ollcltotlon of on offer 10 buy or sell ony security referred 10 or mentioned The motler 15 presented merely for the convenience of the subscriber While tJ believe Ihe SOlJrccs of OlJr Information 10 be reliable, we In no way represent or guarantee The accuracy thereof nor of the Slalements mude herein Any action to be ,aken by the subscriber should be based on hiS own Inveshgatlon and Informalion Janney Montgomery Scott, Inc, as a corporation, and In officers or employees, may now have, or may 10ler toke. poslt/ons or trades In respect to any SCiurllles mentioned In Ihls or any future ISUe, and such position may be different from any views now or hereafter e1pressed In thl or any other ISsue Janney Montgomery Scali, Inc, which IS registered WIth the SEC as en Investment advisor, may give adVice to Its Investment adVISOry and othel CUSlomea Independently of any statements mode In thIS or In any other Issue Funher InformatIOn on any seo.trlly mentioned herein IS available on request