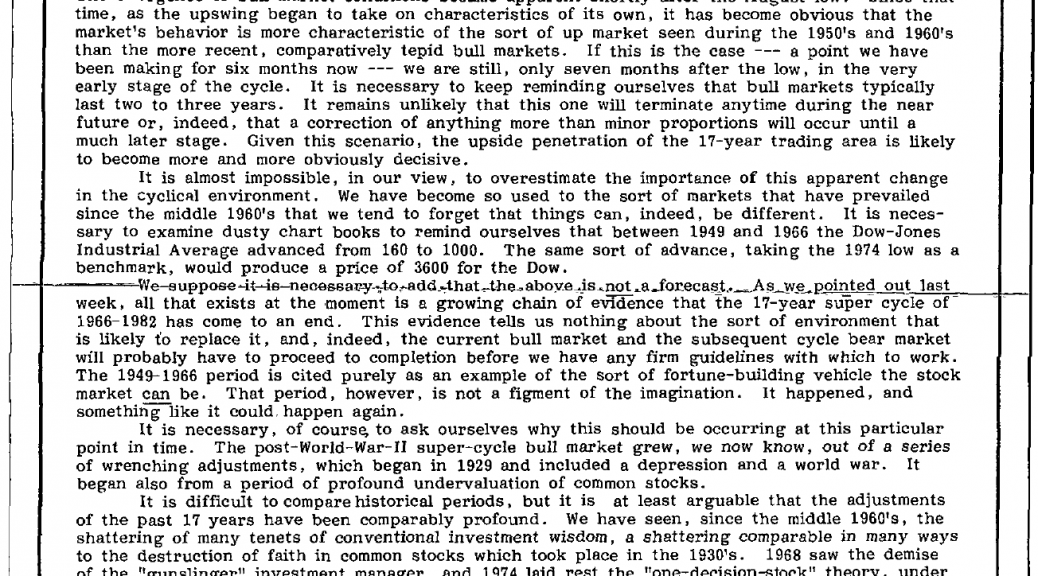 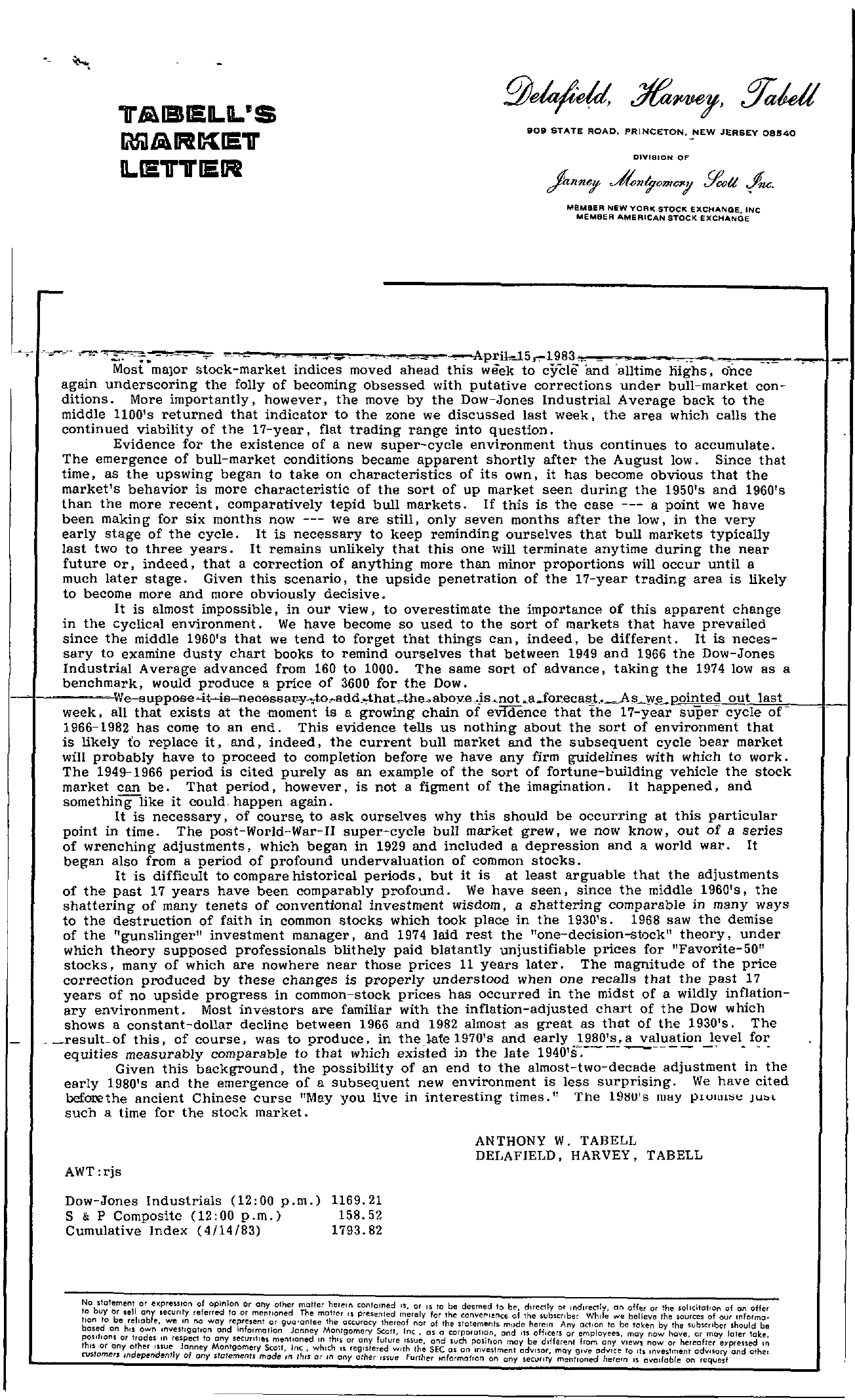 .- 1ArBELa..' s &l1iUii\RET LeTTER 909 STATE ROAD, PRINCETON, NEW JERSEY 08540 DIVISION OF MEM8ER NEW YORK STOCK EXCHANGE, INC MEMBER AMERICAN STOCK eXCHANGE –e-'– , – – ,, -.–April,151983,, n iViost'maJor stock-market indices moved ahead this week to cycle and 'alltime nighs, once again underscoring the folly of becoming obsessed with putative corrections under bull-market con- ditions. More importantly, however, the move by the Dow-Jones Industrial Average back to the middle 1100's returned that indicator to the zone we discussed last week, the area which calls the continued viability of the 17-year, flat trading range into question. Evidence for the existence of a new super-cycle environment thus continues to accumulate. The emergence of bull-market conditions became apparent shortly after the August low. Since that time, as the upswing began to take on characteristics of its own, it has become obvious that the market's behavior is more characteristic of the sort of up market seen during the 1950's and 1960's than the more recent, comparatively tepid bull markets. If this is the case — a point we have been making for six months now — we are still, only seven months after the low, in the very early stage of the cycle. It is necessary to keep reminding ourselves that bull markets typically last two to three years. It remains unlikely that this one will terminate anytime during the near future or, indeed, that a correction of anything more than minor proportions will occur until a much later stage. Given this scenario, the upside penetration of the 17-year trading area is likely to become more and more obviously decisive. It is almost impossible, in our view, to overestimate the importance of this apparent change in the cyclicl environment. We have become so used to the sort of markets that have prevailed since the middle 1960's that we tend to forget that things can, indeed, be different. It is neces- sary to examine dusty chart books to remind ourselves that between 1949 and 1966 the Dow-Jones Industrial Average advanced from 160 to 1000. The same sort of advance, taking the 1974 low as a benchmark, would produce a price of 3600 for the Dow. 1-4——-\We-supposeiti..-necessar-y.toadd,thatt-he.abO)1eJs.not aforecast,.As'.eI!ointed out last week, all that exists at the moment is a growing chain of evidence that the 17-year super cycle of 1966-1982 has come to an end, This evidence tells us nothing about the sort of environment that is likely to replace it, and, indeed, the current bull market and the subsequent cycle bear market will probably have to proceed to completion before we have any firm guidelines with which to work. The 1949-1966 period is cited purely as an example of the sort of fortune-building vehicle the stock market can be. That period, however, is not a figment of the imagination. It happened, and something like it could, happen again. It is necessary, of course, to ask ourselves why this should be occurring at this particular point in time. The post-World-War- II super-cycle bull market grew, we now know, out of a series of wrenching adjustments, which began in 1929 and included a depression and a world war. It began also from a period of profound undervaluation of common stocks. It is difficult to compare historical periods, but it is at least arguable that the adjustments of the past 17 years have been comparably profound. We have seen, since the middle 1960's, the shattering of many tenets of conventional investment wisdom, a shattering comparable in many ways to the destruction of faith in common stocks which took place in the 1930's. 1968 saw the demise of the gunslinger investment manager, and 1974 laid rest the one-decision-stock theory, under which theory supposed professionals blithely paid blatantly unjustifiable prices for Favorite- 50 stocks, many of which are nowhere near those prices 11 years later. The magnitude of the price correction produced by these changes is properly understood when one recalls that the past 17 years of no upside progress in common-stock prices has occurred in the midst of a wildly inflation- ary environment. Most investors are familiar with the inflation-adjusted chart of the Dow which shows a constant-dollar decline between 1966 and 1982 almost as great as that of the 1930's. The resulLof this, of course, was to produce, in the late 1970's and early 1980's,a valuation level for equities measurably comparable to that which existed in the late 1940'8-;– — —– — – — Given this background, the possibility of an end to the almost-two-decade adjustment in the early 1980's and the emergence of a subsequent new environment is less surprising. We have cited beforethe ancient Chinese curse May you live in interesting times. n The 19HU's may plulluse JU'l such a time for the stock market. AWT rjs ANTHONY W, TAB ELL DELAFIELD, HARVEY, TABELL Dow-Jones Industrials (1200 p.m.) 1169.21 S & P Composite (1200 p.m.) 158.52 Cumulative Index (4/14/83) 1793.82 NObSlalemenl or e)(prelon of opinion ar any olner moIler herein contolned IS, ar IS Ie be deemed to. be, dmctly or Indirectly, an off!;!r or Ihe ollcilolton of on offer toon uyo or sell on security be hellob e, we In referred no woy Ie or m(!nlloned The malter presented merely represenl or guo'ontee Ihe accuracy thereof nor fOf Ihe c.onverlence of the subscriber While oNe believe the 50urces of our tnfarmoof Ihe statements mude herein Any oct, on 10 be token by the subscnber should be PnoOselhonosn or 1 I own rades inVestigation IrI reSpect 10 and any eI-ncIfJorrlmIIaStiomnen tJiaonnnedeyIrIMtohlntgoormaenryy Scoll, future Inc, 0 0 Issue, and corporation, and lIS off,eers or sucn position moy be different employee5, mo.,. from any views now now nove, or moy later teke, or hereafter eypressed In I IS or onV her;dsue Janney Montgomery Scoll, Inc, which IS registered WITh the SEC as on Investment odvisor, mQV give adVice to 1\1 Investment adv'SQry ond cthel Cl./stomers In epe ently of any statements made fI'l thiS or fI'l any ather IsstJe further IMformolton on ony security mentioned herem,s avadable on requesf