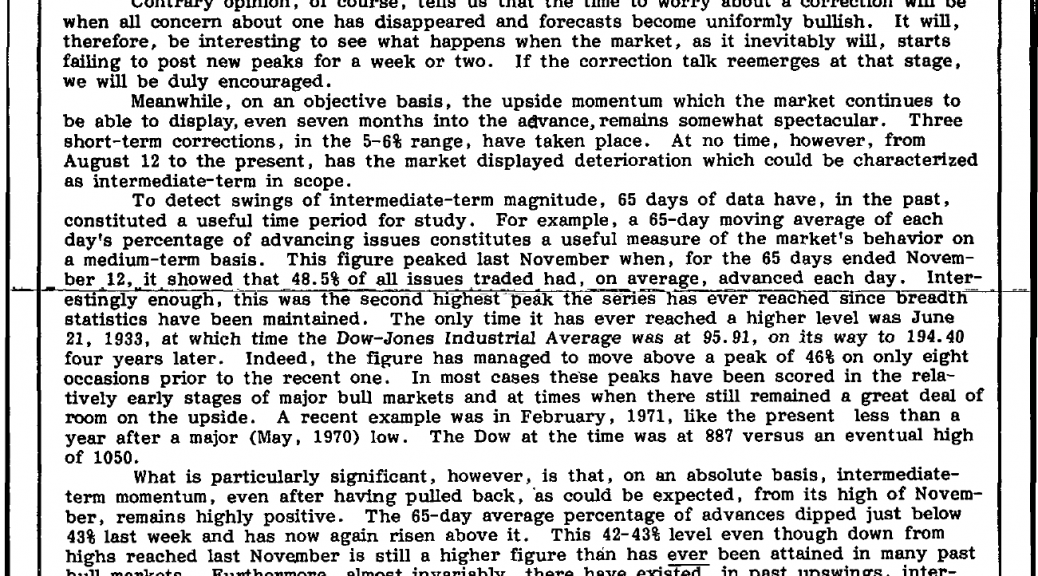 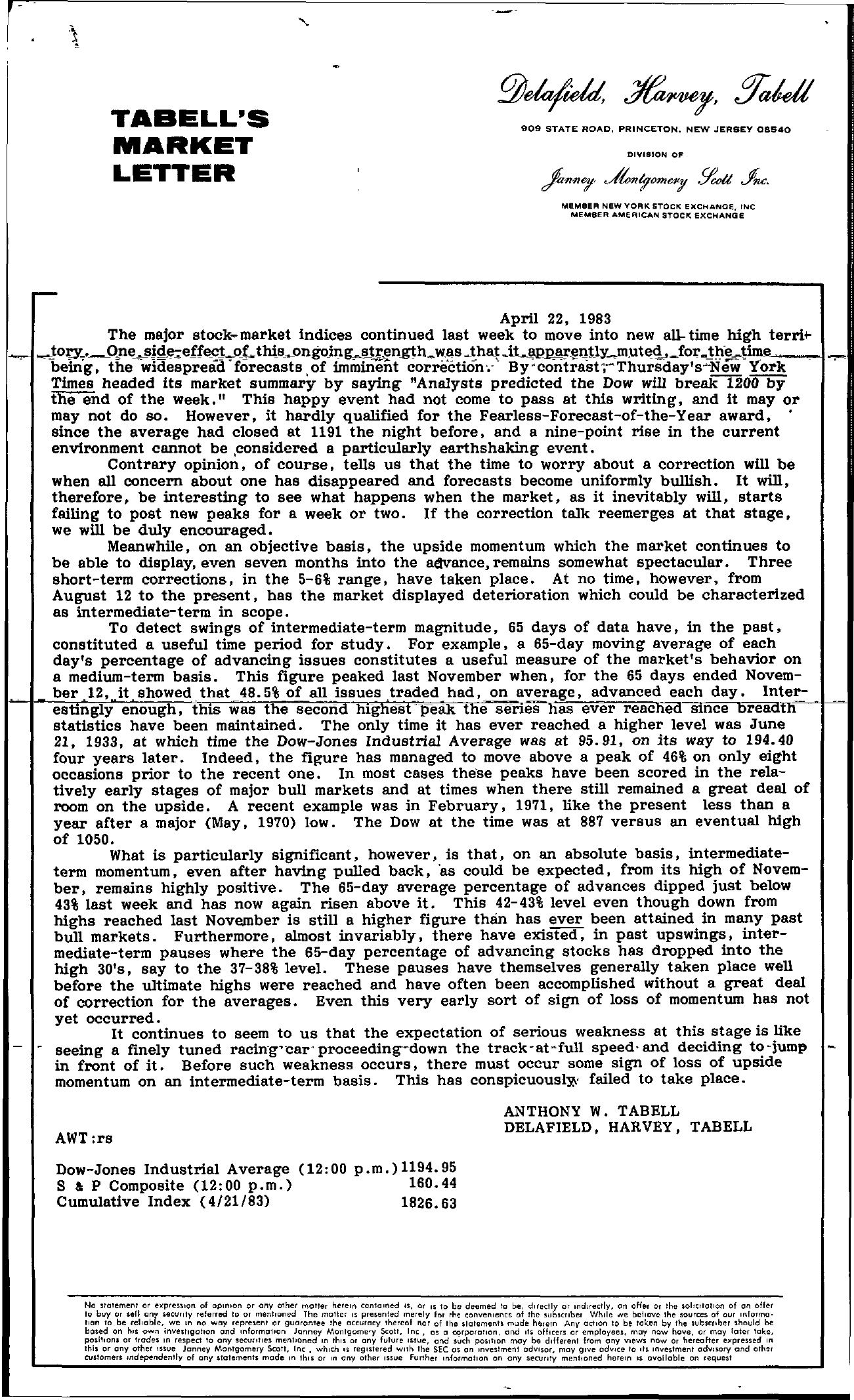 TABELL'S MARKET LETTER 909 STATE ROAD, PRINCETON. NEW JERSEY 08540 DIVISION OF MEMBER New YOAK STOCK EXCHANGE. tNC MEMBER AMERICAN STOCI( EXCHANGe April 22. 1983 The major stockmarket indices continued last week to move into newall-time high terri- .-,.- JoO'.Onjg,e;effcLoJ..thtsongoJnL!ltrengthwasthatit…llpJllU,entJym,uted.for.thetimeL, ..J behlg. tile widespread' forecasts of imminEint corriiction ,.,' By ;contrast;-Thursday's-New -York ..,…, Times headed its market summarY by saying Analysts predicted the Dow will break 1200 by the end of the week. This happy event had not come to pass at this writing. and it mayor may not do so. However. it hardly qualified for the Fearless-Forecast-of-the-Year award. since the average had closed at 1191 the night before. and a nine-point rise in the current environment cannot be ,considered a particularly earthshaking event. Contrary opinion. of course. tells us that the time to worry about a correction will be when all concern about one has disappeared and forecasts become uniformly bullish. It will. therefore. be interesting to see what happens when the market. as it inevitably will. starts failing to post new peaks for a week or two. If the correction talk reemerges at that stage. we will be duly encouraged. Meanwhile. on an objective basis. the upside momentum which the market continues to be able to display. even seven months into the aEIvance, remains somewhat spectacular. Three short-term corrections. in the 5-6 range. have taken place. At no time. however. from August 12 to the present. has the market displayed deterioration which could be characterized as intermediate-term in scope. To detect swings of intermediate-term magnitude. 65 days of data have. in the past. constituted a useful time period for study. For example. a 65-day moving average of each day's percentage of advancing issues constitutes a useful measure of the market's behavior on a medium-term basis. This figure peaked last November when. for the 65 days ended Novem- ber ,12.)t,showedthat 48.5 of all issues traded had, estingly enough. this was the second highest'peak the osnenaveesrnaagse,evadevr arnecaecdheedacShIndcaeyb. reIandtenri- statistics have been maintained. The only time it has ever reached a higher level was June 21. 1933. at which time the Dow-Jones Industrial Average was at 95.91. on its way to 194.40 four years later. Indeed. the figure has managed to move above a peak of 46 on only eight occasions prior to the recent one. In most cases these peaks have been scored in the rela- tively early stages of major bull markets and at times when there still remained a great deal of room on the upside. A recent example was in February. 1971. like the present less than a year after a major (May. 1970) low. The Dow at the time was at 887 versus an eventual high of 1050. What is particularly significant. however. is that. on an absolute basis. intermediate- term momentum. even after having pulled back. 'as could be expected. from its high of Novem- ber. remains highly positive. The 65-day average percentage of advances dipped just below 43 last week and has now again risen above it. This 42-43 level even though down from highs reached last November is still a higher figure than has ever been attained in many past bull markets. Furthermore. almost invariably. there have existed. in past upswings. inter- mediate-term pauses where the 65-day percentage of advancing stocks has dropped into the high 30's. say to the 37-38 level. These pauses have themselves generally taken place well before the ultimate highs were reached and have often been accomplished without a great deal of correction for the averages. Even this very early sort of sign of loss of momentum has not yet occurred. It continues to seem to us that the expectation of serious weakness at this stage is like – – seeing a finely tuned racing'car'proceeding-down the track-at-full speed-and deciding to-jump in front of it. Before such weakness occurs. there must occur some sign of loss of upside momentum on an intermediate-term basis. This has conspicuously'' failed to take place. AWTrs ANTHONY W. TABELL DELAFIELD. HARVEY. TAB ELL Dow-Jones Industrial Average (1200 p.m.)1194.95 S P Composite (12 00 p. m. ) 160.44 Cumulative Index (4/21/83) 1826.63 No statement or eXpres.llOn of opinion or any other motter herein contolned IS, or IS 10 be deemed to be, directly or indirectly, an offer or the ohCllatlon of an offer 10 buy or sell any security referred to or menlroned The motter IS presented merely for the convenience of the subscriber While e believe the sources of our Informa tlon to be reliable, we In no way represent or guarantee the accuracy thereof nor of the statements mude herem Any action to be taken by the subscrtber should be based on hiS own invetlgallon and Informalton Janney Montgame'Y Scott, Inc, as a rporallon, and It officers or employees, moy now hove, or may later lake, posItion. or trodes In respect 10 any s(!Cunlles mentiOned In Ihls or any future ISSUe, and such poslllon may be different from any views now Or hereofter epressed In thl, or ony other ISsue Jonney Montgomery Scott, tnc which ' reglslered wllh the SEC 0 an Investment adVisor, may give adVice to Its Inveslment advISOry and olhel cvstomers Independently of cny slalements mode In thiS or In cny olller Issue Further information on cny seomty mentioned herein IS ovolloble on requeSI