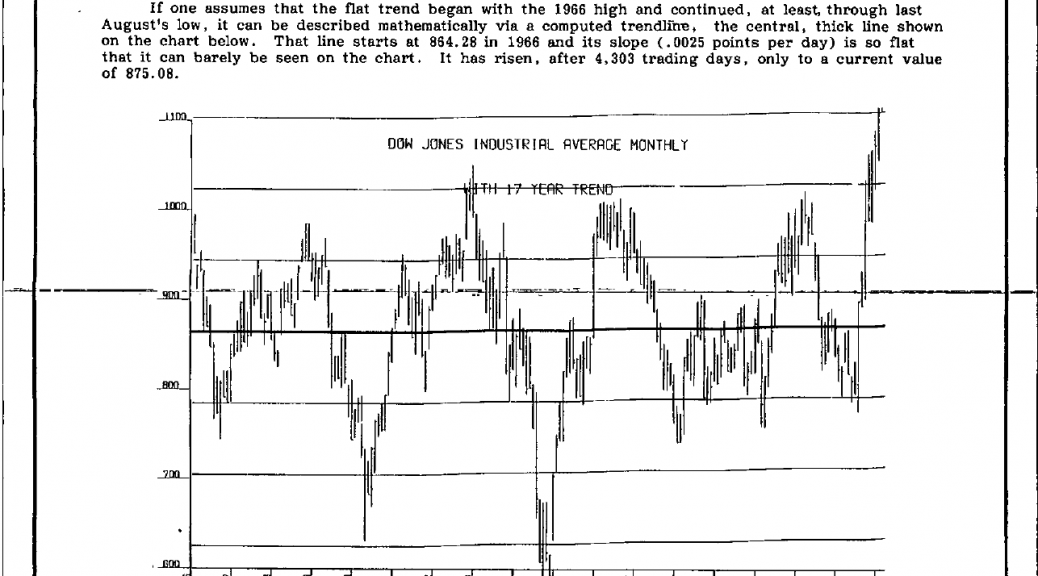 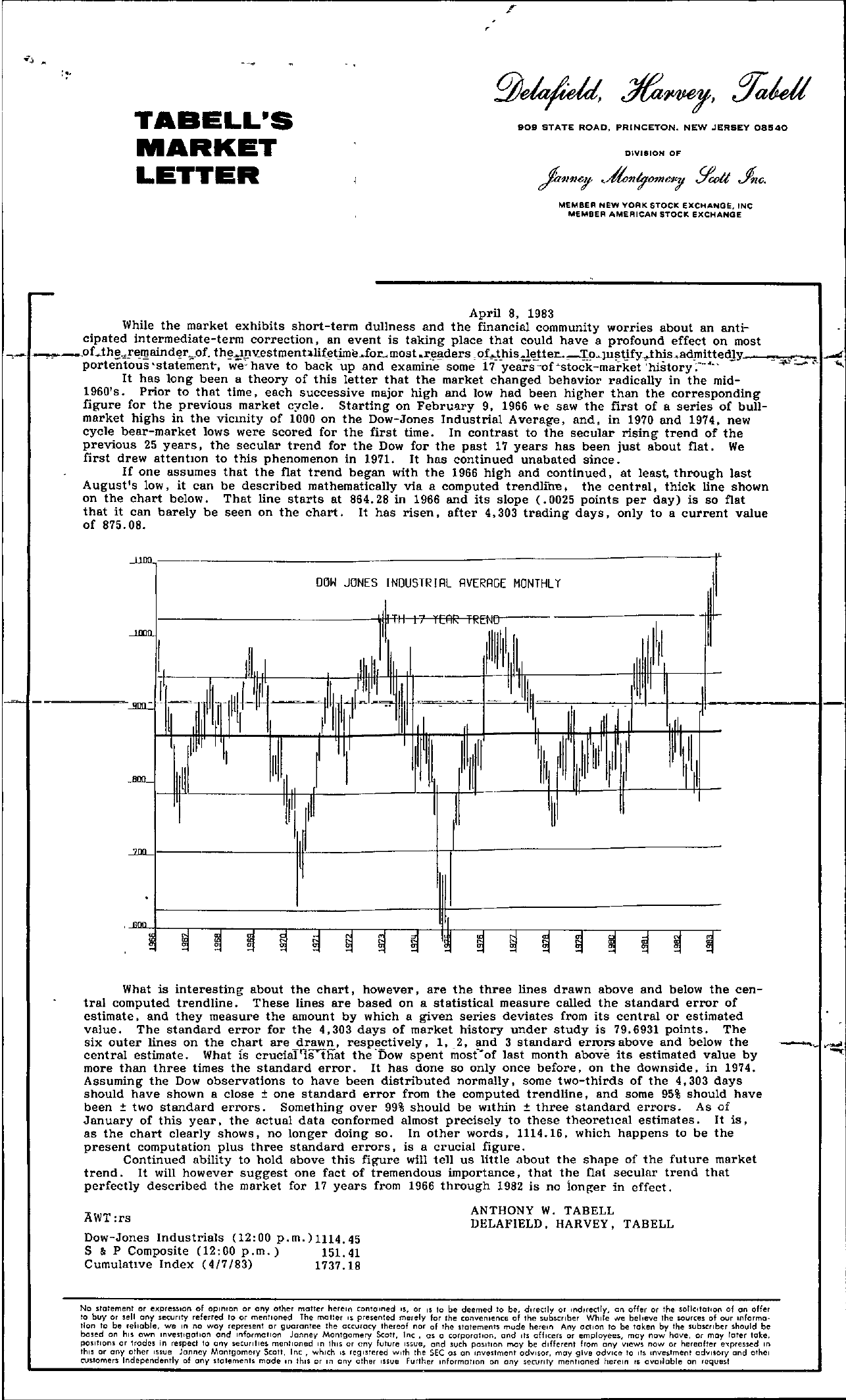 r TABELL'S MARKET LETTER 909 STATE ROAD, PRINCETON. NEW JERSEY 081540 DIVISION OF MEMBER NEW YORK STOCK EXCHANGE, INC MEMBER AMERICAN STOCK eXCHANGE April 8, 1983 While the market exhibits short-term dullness and the financial community worries about an antiC.i,Il!.t..ed intermediate-term correction, an event is taking place that could have a profound effect on most I t….,—l';klt;;111'A'';,,n;Wf;et-hhe-a-.vlenvt.oestmbeanbclik,('eutipme-a-1nodr…e.xmoasmt .irneead-erssonmOfefi17k'y,''O'l'''',t;;J'''t''.!X;.'(.'..;..t,ed!y'-;,–,;'1I-.. It has long been a theory of this letter that the market changed behavior radically in the mid- 1960's. Prior to that time, each successive major high and low had been higher than the corresponding figure for the previous market cvcle. Starting on FebruJlry 9, 1966 \l(e saw the first of a series of buUmarket highs in the vicmity of 1000 on the Dow-Jones Industrial Average, and, in 1970 and 1974, new cycle bear-market lows were scored for the first time. In contrast to the secular rising trend of the previous 25 years, the secular trend for the Dow for the past 17 years has been just about flat. We first drew attentIon to this phenomenon in 1971. It has continued unabated since. If one assumes that the flat trend began with the 1966 high and continued, at least, through last August1s low, it can be described mathematically via a computed trendlirre. the central, thick line shown on the chart below. That line starts at 864.28 in 1966 and its slope (.0025 points per day) is so flat that it can barely be seen on the chart. It has risen, after 4,303 trading days, only to a current value of 875.08. DOH JONES INDUSTRIAL RVERRGE MONTHLY I– I -'L ltrLII,I — III I II! What is interesting about the chart, however, are the three lines drawn above and below the cen- tral computed trendline. These lines are based on a statistical measure called the standard error of estimate. and they measure the amount by which a given series deviates from its central or estimated value. The standard error for the 4,303 days of market history under study is 79.6931 points. The six outer lines on the chart are drawn, respectively, I, 2. and 3 standard errors above and below the central estimate. What is cruciaI9Sthat the Dow spent mosf'of last month above its estimated value by more than three times the standard error. It has done so only once before, on the downside, in 1974. Assuming the Dow observations to have been distributed normally. some two-thirds of the 4.303 days should have shown a close one standard error from the computed trendline. and some 95 should have been two standard errors. Something over 99 should be wlthin three standard errors. As of January of this year, the actual data conformed almost precisely to these theoretIcal estimates. It is, as the chart clearly shows, no longer doing so. In other words, 1114.16, which happens to be the present computation plus three standard errors. is a crucial figure. Continued ability to hold above this figure will tell us little about the shape of the future market trend. It will however suggest one fact of tremendous importance, that the flAt secular trend that perfectly described the market for 17 years from 1966 through 1982 is no longer in effect. –oI1 )\WT rs Dow-Jones Industrials (1200 p.m.11114. 45 S & P Composite (1200 p.m.) 151.41 Cumulatlve Index (4/7/83) 1737.18 ANTHONY W. TAB ELL DELAFIELD. HARVEY, TAB ELL No statement or exprenlon of opinIon or any other matter hereIn contained IS, or IS 10 be deemed to be, dHecily or l!'Id,recily, on offer or the 501lc.101l0n of on offer to buy or sell any security referred fo Of mentioned The maUer IS presented merely for the convenience of lhe subscriber While we bel.eve Ihe sources of our In(ormatlon 10 be reliable, we ,n no way represent or guarantee the accuracy lhereof nor of Ihe statements mude herein Any action 10 be token by Ihe subscriber should be based on hiS own Invesllgallon and information Janney Montgomery Scotl, Inc. os a corporation. and Its offICers Of employees, moy now have, or may later toke. positions or trades In respect 10 any seCUrllle mentioned In Ih,s or cny fulure Issue, and such position moy be different from any views now or hereafter expressed In Ih,s or any other Issue Janney Monlgomery Scott, Inc, which IS registered With the SEC as on Inveslment adVisor, may give odvlce to Its Investment odvISory and olhel C'Uslomers Independently of any slalements mode In thiS or In any other Issue Furlher informatIon on any seCl.Hlty menlloned herein IS available on request