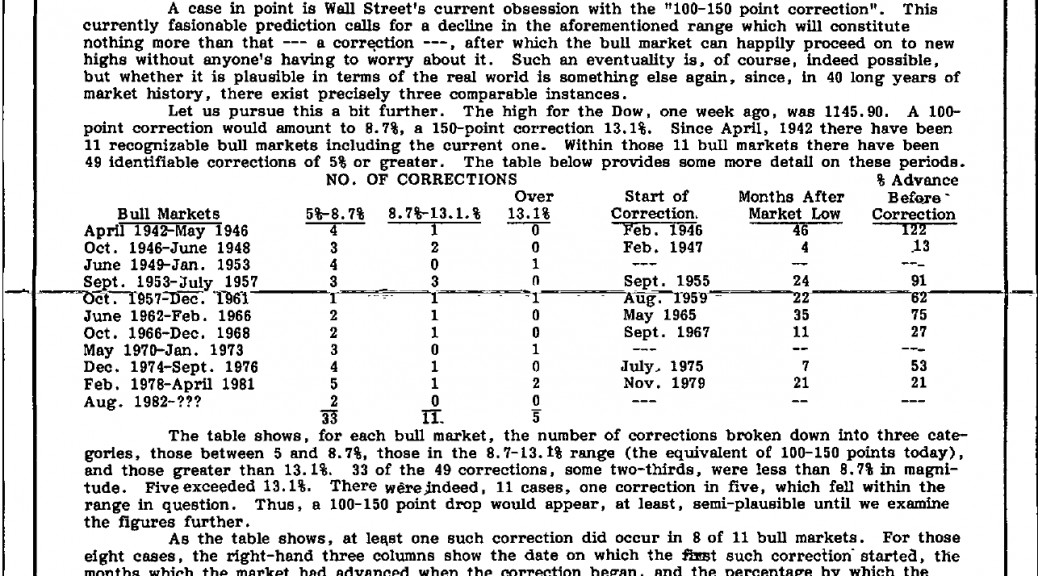 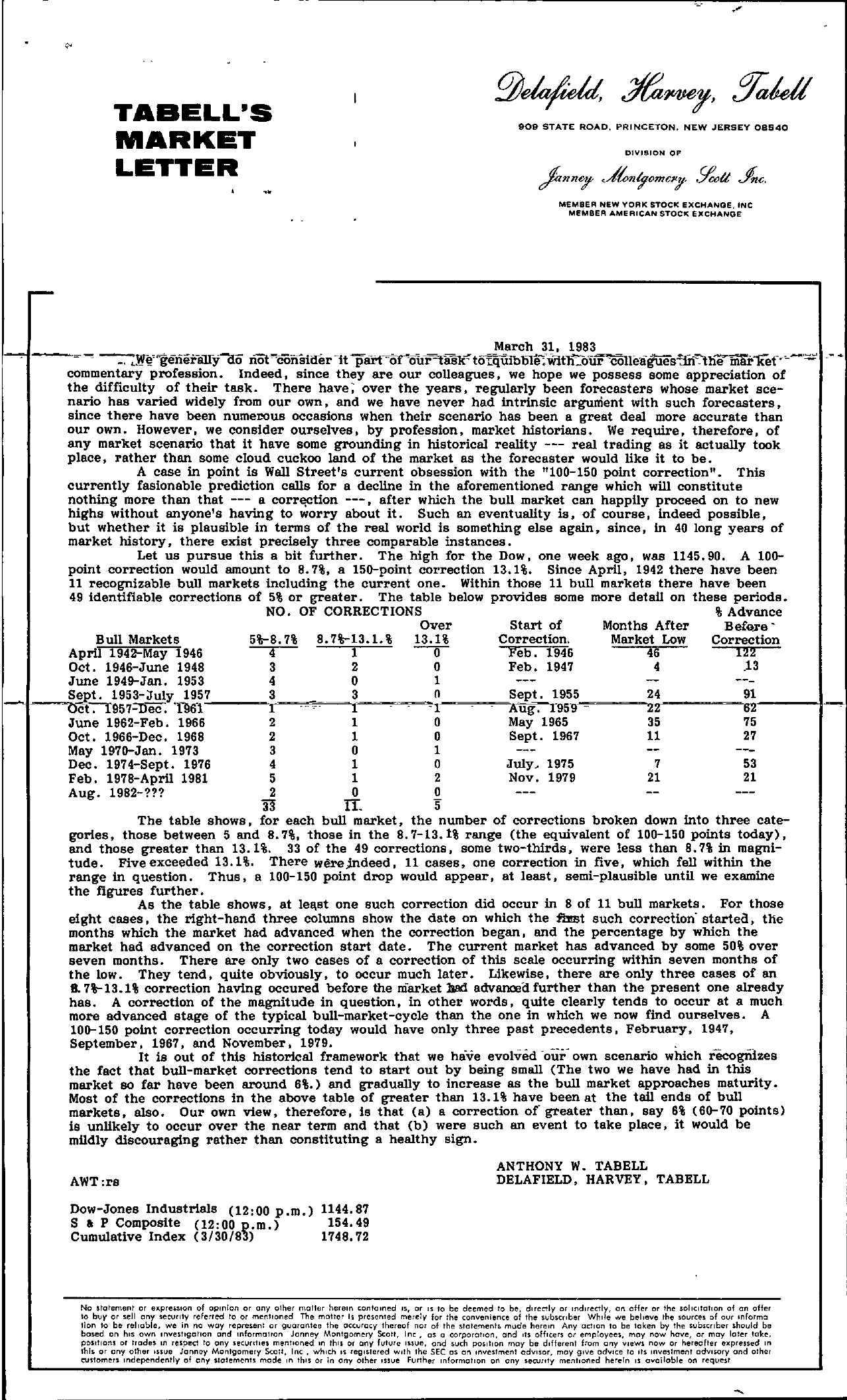 TABELL'S MARKET LETTER 909 STATE ROAD, PRINCETON, NEW JERSEY 08540 DIYISION OF MEMBER NEW YORK STOCK EXCHANOE, INC MEMBER AMEAICAN STOCK EXCHANGE – March 31, 1983 …….,. – —'Wlf'jeiierlillyao notciii'iirlQer -It part -onfur-tiiBK'toTIjiiibble-;-WitlLOUr -collellgues'm-the in8r'Kef'-''''' commentary profession. Indeed, since they are our colleagues, we hope we possess some appreciation of the difficulty of their task. There have; over the years, regularly been forecasters whose market scenario has varied widely from our own, and we have never had intrinsic argument with such forecasters, since there have been numerous occasions when their scenario has been a great deal more accurate than our own. However. we consider ourselves. by profession, market historians. We require, therefore J of any market scenario that it have some grounding in historical reality — real trading as it actually took place, rather than some cloud cuckoo land of the market as the forecaster would like it to be. A case in point is Wall Street's current obsession with the 100-150 point correction. This currently fasionable prediction calls for a decline in the aforementioned range which will constitute nothing more than that — a corr'\Ction —, after which the bull market can happUy proceed on to new highs without anyone's having to worry about it. Such an eventuality is, of course, indeed possible, but whether it is plausible in terms of the real world is something else again, since, in 40 long years of market history, there exist precisely three comparable instances. Let us pursue this a bit further. The high for the Dow, one week ago, was 1145.90. A 100point correction would amount to 8.7, a 150-point correction 13.1. Since April, 1942 there have been 11 recognizable bull markets including the current one. Within those 11 bull markets there have been 49 identifiable corrections of 5 or greater. The table below provides some more detail on these periods. Bull Markets April 1942-May 1946 NO. OF CORRECTIONS Over 5–8.7 8.7–13.1. 13.1 4 1 –0- Stsrt of Correction. Feb. 1946 Months After Market Low 46 Advance BefQl'6 Correction 122 Oct. 1946-June 1948 3 2 0 Feb. 1947 4 .13 June 1949–Jan. 1953 4 0 1 – —'bcSCepTt9. 5179-5D3-eJcul.yT916915-7'—-1…3…..,,li3….,.'1-..0..,……,.SAeupg.t. 11995559;…,..24–'22—-9,162'—1 June 1962-Feb. 1966 2 1 0 May 1965 35 75 Oct. 1966-Dec. 1968 2 1 0 Sept. 1967 11 27 May 1970-Jan. 1973 3 0 1 Dec. 1974-Sept. 1976 4 1 0 July, 1975 7 53 Feb. 1978-April 1981 5 1 2 Nov. 1979 21 21 Aug. 1982- 200 33 IT. '5 The table shows, for each bull market, the number of corrections broken down into three cate- gories, those between 5 and 8.7, those in the 8.7-13.1 range (the equivalent of 100-150 points today), and those greater than 13.1. 33 of the 49 corrections, some two-thirds, were less than 8.7 in magni- tude. Five exceeded 13.1. There were;lndeed, 11 cases, one correction in five, which fell within the range in question. Thus, a 100-150 point drop would appear, at least, semi-plausible until we examine the figures further. As the table shows, at lest one such correction did occur in 8 of 11 bull markets. For those eight cases, the right-hand three columns show the date on which the fhmt such correction'stsrtea, the months which the market had advanced when the correction began, and the percentage by which the market had advanced on the correction start date. The current market has advanced by some 50 over seven months. There are only two cases of a correction of this scale occurring within seven months of the low. They tend, quite obviously, to occur much later. Likewise, there are only three cases of an B. 7–13.1 correction having occured before the market had advanced further than the present one already has. A correction of the magnitude in question, in other words, quite clearly tends to occur at a much more advanced stage of the typical bull-market-cycle than the one in which we now find ourselves. A 100-150 point correction occurring today would have only three past precedents, February, 1947, September, 1967, and November, 1979. , It is out of this historical framework that we have evolved our own scenario which recognizes the fact that bull-market corrections tend to start out by being small (The two we have had in this market SO far have been around 6.) and gradually to increase as the bull market approaches maturity. Most of the corrections in the above table of greater than 13.1 have been at the tail ends of bull markets, also. Our own view, therefore, is that (a) a correction of greater than, say 6 (60-70 points) is unlikely to occur over the near term and that (b) were such an event to take place, It would be mUdly discouraging rather than constituting a healthy sign. AWTrs ANTHONY W. TABELL DELAFIELD, HARVEY, TABELL Dow-Jones Industrials (1200 p.m.) 1144.87 SloP Composite (1200 p.m.) 154.49 Cumulative Index (3/30/83) 1748.72 No statement or expression of opmlon or any other matter herein contained IS, or IS 10 be deemed 10 be, dlr(ctly or indirectly, on offer or the ollcltallon of on offer to bvy or sell any seclrIly referred to or menlroned The molter is presented merely for the convenience of Ihe svbscnber While we believe the sources of ovr Informo lion to be reliable, we in no way represent or guarantee the accuracy Ihereof nor of the slatement mode herem Any action 10 be token by the vbscnber should be based on hiS own InveSllgatlon and mformalron Janney Monlgomery Stott, Inc, as a corporation, and Its officers or employees, moy now hove, or may loler loke, positions or trodes In respect to any secvnhes mentioned In Ihls or any fulvle Issue, and svch position may be dlfferenl from any views now or hereafter expressed In Ihls or any other Issue Janney Montgomery Stoll, Inc, which IS reglslered w.th Ihe SEC os on ,nveslmenl adVisor, may give odvlce to 11 tnveslmenl adVISOry and other customers mdependently of any statemenls mode In thiS or In ony olher Issue Further Informollon on any sewrtly mentioned herein IS available on request