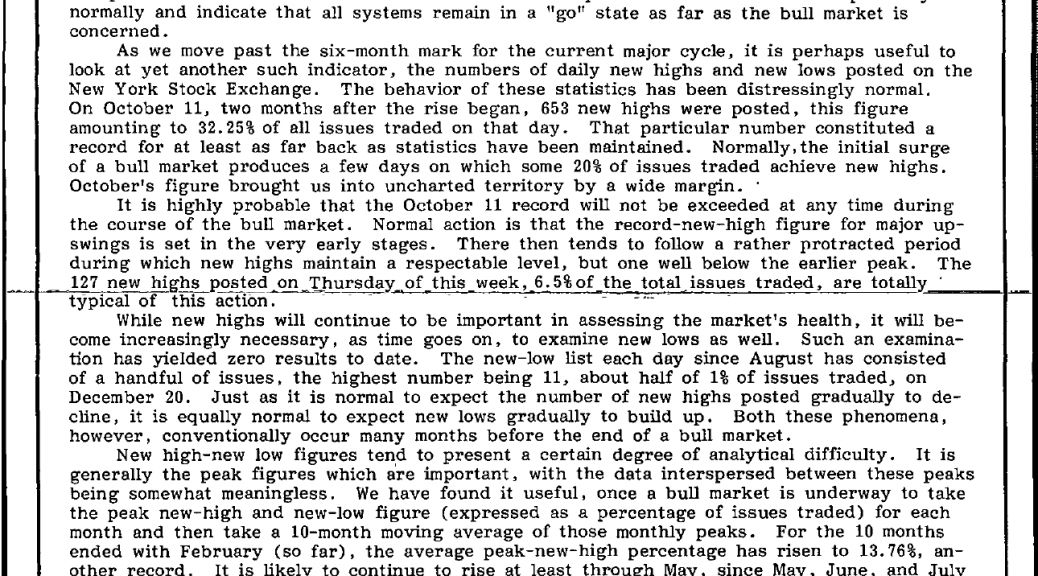 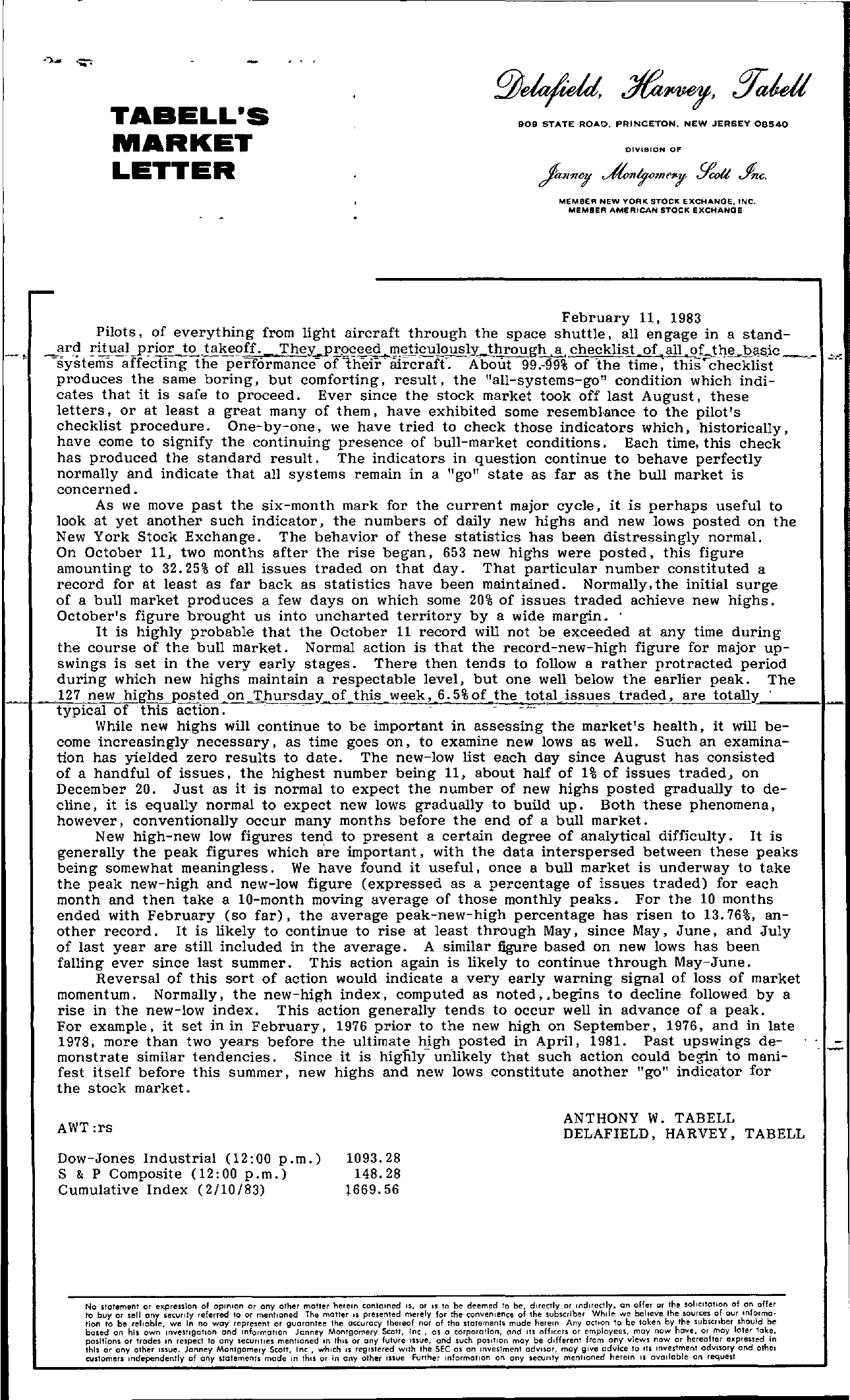 TABELL'S MARKET LETTER 909 STATE ROAD. PRINCETON. NEW JERSEY 08540 DIVISION OF MEMBER NEW VORK STOCK EXCHANGE, tNC. MEM8ER AMeRICAN STOCI( eXCHANGE – February 11, 1983 Pilots, of everything from light aircraft through the space shuttle, all engage in a stand- arc;I !,itu1 Yrior !2..!akeoff. They'-p!;,,-ed'!l,eticullyt,hrougl.!…..!!.. checklist of all of.Jl)J,s.ic 'systems affecting the performance' of their' aircraft. About 99.-99 of the time; thisrchecklist – produces the same boring, but comforting, result, the all-systems-go condition which indi- cates that it is safe to proceed. Ever since the stock market took off last August, these letters, or at least a great many of them, have exhibited some resemblance to the pilot's checklist procedure. One-by-one, we have tried to check those indicators which, historically, have come to signify the continuing presence of bull-market conditions. Each time, this check has produced the standard result. The indicators in question continue to behave perfectly normally and indicate that all systems remain in a go state as far as the bull market is concerned. As we move past the six-month mark for the current major cycle, it is perhaps useful to look at yet another such indicator, the numbers of daily new highs and new lows posted on the New York Stock Exchange. The behavior of these statistics has been distressingly normal. On October 11, two months after the rise began, 653 new highs were posted, this figure amounting to 32.25 of all issues traded on that day. That particular number constituted a record for at least as far back as statistics have been maintained. Normally, the initial surge of a bull market produces a few days on which some 20 of issues traded achieve new highs. October's figure brought us into uncharted territory by a wide margin.. It is highly probable that the October 11 record will not be exceeded at any time during the course of the bull market. Normal action is that the record-new-high figure for major up- swings is set in the very early stages. There then tends to follow a rather protracted period during which new highs maintain a respectable level, but one well below the earlier peak. The 127 new higosted on Thursday of this week, 6.5of the total issues traded, are totally,' t typical of this action. . . – . While new highs will continue to be important in assessing the market's health, it will be- come increasingly necessary, as time goes on, to examine new lows as well. Such an examina- tion has yielded zero results to date. The new-low list each day since August has consisted of a handful of issues, the highest number being 11, about half of 1 of issues traded, on December 20. Just as it is normal to expect the number of new highs posted gradually to de- cline, it is equally normal to expect new lows gradually to build up. Both these phenomena, however, conventionally occur many months before the end of a bull market. New high-new low figures tend to present a certain degree of analytical difficulty. It is generally the peak figures which are important, with the data interspersed between these peaks being somewhat meaningless. We have found it useful, once a bull market is underway to take the peak new-high and neW-low figure (expressed as a percentage of issues traded) for each month and then take a 10-month moving average of those monthly peaks. For the 10 months ended with February (so far), the average peak-new-high percentage has risen to 13.76, an- other record. It is likely to continue to rise at least through May, since May, June, and July of last year are still included in the average. A similar figure based on new lows has been falling ever since last summer. This action again is likely to continue through May-June. Reversal of this sort of action would indicate a very early warning signal of loss of market momentum. Normally, the new-high index, computed as notedbegins to decline followed by a rise in the new-low index. This action generally tends to occur well in advance of a peak. For example, it set in in February, 1976 prior to the new high on September, 1976, and in late 1978, more than two years before the ultimate high posted in April, 1981. Past upswings de- monstrate similar tendencies. Since it is highly- un1ikely that such action could begin' to mani- fest itself before this summer, new highs and new lows constitute another go indicator for the stock market. AWT rs Dow-Jones Industrial (12 00 p. m.) S & P Composite (12 00 p. m.) Cumulative Index (2/10/83) 1093.28 148.28 1669.56 ANTHONY W. TABELL DELAFIELD, HARVEY, TABELL No Iatement or expression of opinIon or any olher molter herein contolned 1, or IS to be deemed to be, directly or Indirectly, an offer or the sollcllollon of on offer to buy or sell cny security referred 10 or mentioned The motter .s presented merely for the conVerlience of the subscriber While we believe the sources of our utformalion to be r!!!llable, we In no way represent or guaranl!!!e the accuracy thereof nor of !he staTements mude herein Any Ochon 10 be token by the subcrlber should be based on his own Investigation and Information Janney Montgomery Scoit, Inc, as a corporation, and lIS officers or employees, may now have, or moy later lake, positions or trades In respect 10 any seCUrities menhoned In thiS or any future luue, and such position may be different from any views now or hereofter expressed in this or any other ISsue, Janney MonTgomery Scott, Inc, which 1 registered With the SEC as on Investment adVisor, may give advice to ITS mveslment adVisory and othel customers Independently of any uatements mode In thiS or In any other Inue Further information on ony security mentioned herein IS available on request