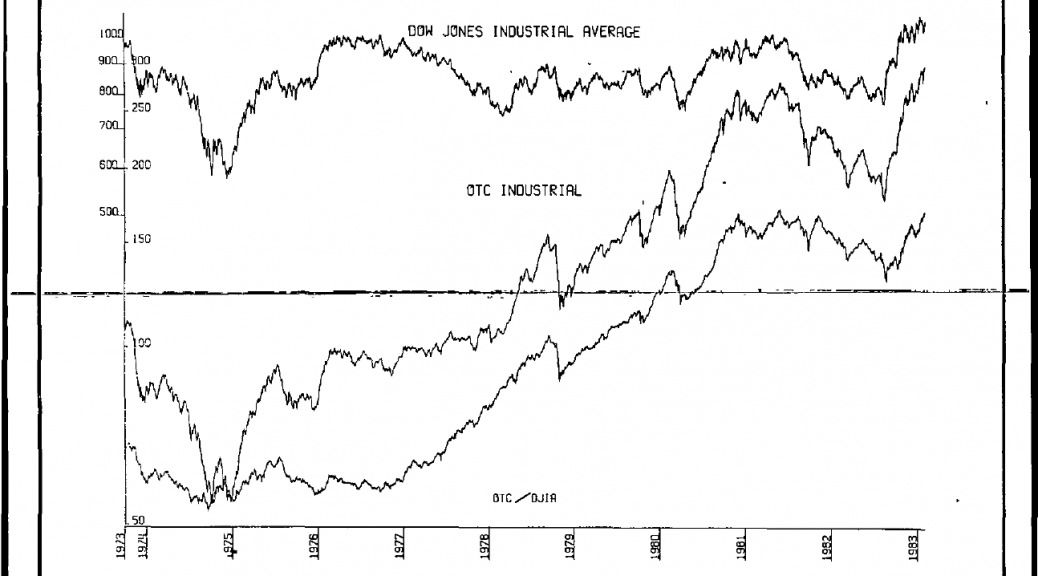 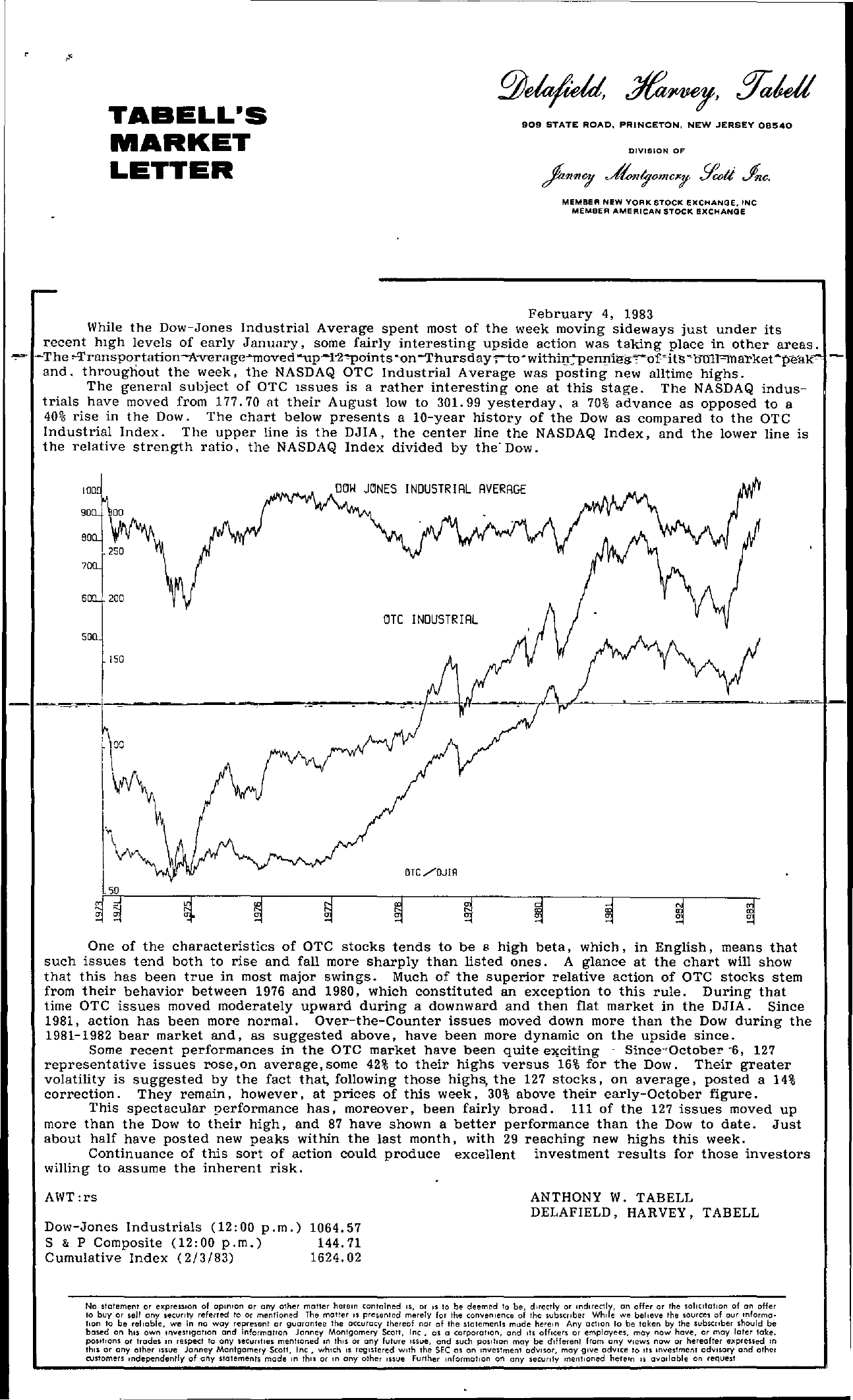 TABELL'S MARKET LETTER 909 STATE ROAD, PRINCETON, NEW JERSEY 08540 DIYISION OF MEMBER NEW YORK STOCK EXCHANaE, INC MEMBER AMERICAN STOCK EXCHANoe February 4, 1983 While the Dow-Jones Industrial Average spent most of the week moving sideways just under its recent hIgh levels of early January, some fairly interesting upside action was taking place in other areas. -T he Transportation-A'vcra ge–moved 'up-1'2Point s 'on-Thurs d ay-;-to withiennleof'its -. b-u11m a1'ket-pe-aKand. througliout the week, the NASDAQ OTC Industrial Average was posting new alltime highs. The general subject of OTC Issues is a rather interesting one at this stage. The NASDAQ industrials have moved from 177.70 at their August low to 301. 99 yesterday. a 70 advance as opposed to a 40 rise in the Dow. The chart below presents a 10-year history of the Dow as compared to the OTC Industrial Index. The upper line is the DJIA, the center line the NASDAQ Index, and the lower line is the relative strength ratio. the NASDAQ Index divided by the' Dow. INDUSTRIAL AVERAGE One of the characteristics of OTC stocks tends to be 8 high beta, which, in English, means that such issues tend both to rise and fall more sharply than listed ones. A glance at the chart will show that this has been true in most major swings. Much of the superior relative action of OTC stocks stem from their behavior between 1976 and 1980, which constituted an exception to this rule. During that time OTC issues moved moderately upward during a downward and then flat market in the DJIA. Since 1981, action has been more normal. Over-the-Counter issues moved down more than the Dow during the 1981-1982 bear market and, as suggested above, have been more dynamic on the upside since. Some recent performances in the OTC market have been quite eciting , SinceOctober -6, 127 representative issues rose,on average, some 42 to their highs versus 16 for the Dow. Their greater volatility is suggested by the fact that, following those highs, the 127 stocks, on average, posted a 14 correction. They remain, however, at prices of this week, 30 above their early-October figure. This spectacular l'erformance has, moreover, been fairly broad. 111 of the 127 issues moved up more than the Dow to their high, and 87 have shown a better performance than the Dow to date. Just about half have posted new peaks within the last month, with 29 reaching new highs this week. Continuance of this sort of action could produce excellent investment results for those investors willing to assume the inherent risk. AWTrs Dow-Jones Industrials (1200 p.m.) 1064.57 S & P Composite (1200 p.m.) 144.71 Cumulative Index (2/3/83) 1624.02 ANTHONY W. TABELL DELAFIELD, HARVEY, TABELL No statement or expressIon of opinIon or any otner matter herein contained IS, or 1 to be deemed 10 be, directly or mdlfec1ly, an offer or Ihe SOllCllatlon of an offer 10 buy or sell any security referred 10 or mentioned The motter IS presented merely for the convenience of thc subscriber While we bellcve the sourccs of our tnformahon to be reliable, we In no way represent or guarantee the accuracy thereof nor of the stotements mude herein Any oellon to be token by the subscriber should be based on hiS own Investigation and Informatton Janney Montgomery Scali, Inc, as a corporation, and lIS officers or employees, may now have, or may loler lake, poSllions or trades In respect to any seCUrities menlloned In Ihls or any future Issue, and such position may be different from any views now or hereafter C)(prCsed In thiS or any other ISlue Janney Monlgomery call, Inc, which IS registered With the SEC as an Investment adVisor, may give adVice to lIs .nvestmcnt advISOry and othe! customers !ndependently of any statements made In thiS or In any other Issue Further Information on any sccurlty mentioned herein IS ovorlable on request