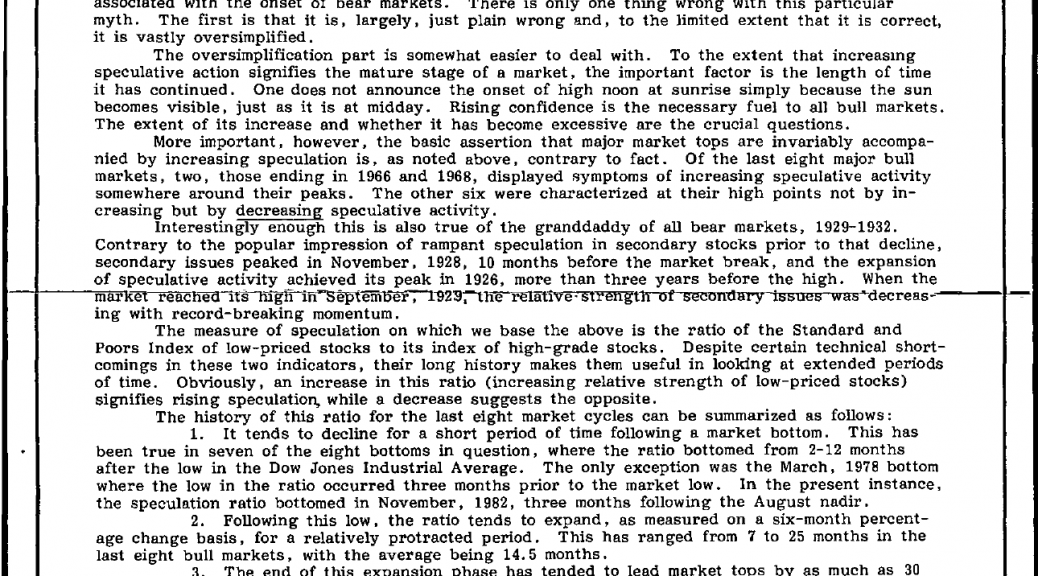 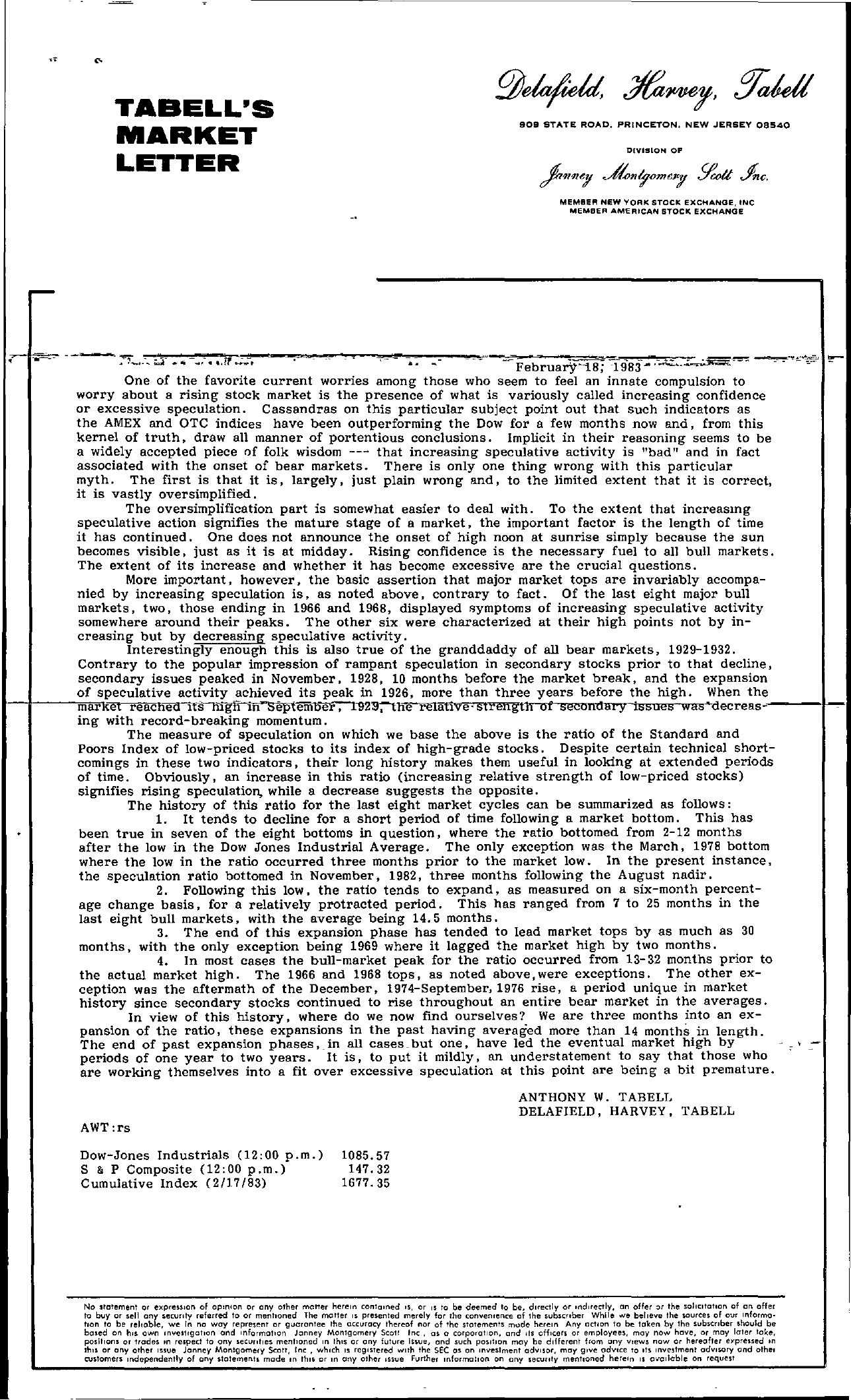 ————,,——————————————————————————. TABELL'S MARKET LETTER 909 STATE ROAD, PRINCETON, NEW JERSEY 08540 DIVISION OF MEMBER NEW YORK STOCK EXCHANGE, INC MEMBER AMERICAN STOCK eXCHANGe .;o– – – – – .-',. – ….. ..o, .. Ir ;..f' – – … — — —Februar)ri.8; -1983– ,….-…….;..;..;z – One of the favorite current worries among those who Seem to feel an innate compulsion to worry about a rising stock market is the presence of what is variously called increasing confidence or excessive speculation. Cassandras on this particular subject point out that such indicators as the AMEX and OTC indices have been outperforming the Dow for a few months now and, from this kernel of truth, draw all manner of portentiolls conclusions. Implicit in their reasoning seems to be a widely accepted piece of folk wisdom — that increasing speculative activity is bad II and in fact associated with the onset of bear markets. There is only one thing wrong with this particular myth. The first is that it is, largely, just plain wrong and, to the limited extent that it is correct, it is vastly oversimplified. The oversimplification part is somewhat easier to deal with. To the extent that increasIng speculative action signifies the mature stage of a market, the important factor is the length of time it has continued. One does not announce the onset of high noon at sunrise simply because the sun becomes visible, just as it is at midday. Rising confidence is the necessary fuel to all bull markets. The extent of its increase and whether it has become excessive are the crucial questions. More important, however j the basic assertion that major market tops are invariably accompa- nied by increasing speculation is, as noted above, contrary to fact. Of the last eight major bull markets, two, those ending in 1966 and 1968, displayed ymptoms of increasing speculative activity somewhere around their peaks. The other six were characterized at their high points not by in- creasing but by decreasing speculative activity. Interestingly enough this is also true of the granddaddy of all bear markets, 1929-1932. Contrary to the popular impression of rampant speculation in secondary stocks prior to that decline, secondary issues peaked in November, 1928, 10 months before the market break, and the expansion of speculative activity achieved its peak in 1926, more than three years before the high. When the 1-41—–'m'ar.Kret reacheo.ltS1iig1lins-eptember;-t92'.901ie relative-sttll of Secondary issues was-'''decreas—-I- ing with record-breaking momentum. The measure of speculation on which we base the above is the ratio of the Standard and Poors Index of low-priced stocks to its index of high-grade stocks. Despite certain technical short- comings in these two indicators, their long history makes them useful in looking at extended periods of time. Obviously, an increase in this ratio (increasing relative strength of low-priced stocks) signifies rising speculation, while a decrease suggests the opposite. The history of this ratio for the last eight market cycles can be summarized as follows 1. It tends to decline for a short period of time following a market bottom. This has been true in seven of the eight bottoms in question, where the ratio bottomed from 2-12 months after the low in the Dow Jones Industrial Average. The only exception was the March, 1978 bottom where the low in the ratio occurred three months prior to the market low. In the present instance, the speculation ratio bottomed in November, 1982, three months following the August nadir. 2. Following this low, the ratio tends to expand, as measured on a six-month percent- age change basis, for a relatively protracted period. This has ranged from 7 to 25 months in the last eight bull markets, with the average being 14.5 months. 3. The end of this expansion phase has tended to lead market tops by as much as 30 months, with the only exception being 1969 where it lagged the market high by two months. 4. In most cases the bull-market peak for the ratio occurred from 13- 32 months prior to the actual market high. The 1966 and 1968 tops, as noted above,were exceptions. The other ex- ception was the aftermath of the December, 1974-SeptemberJ 1976 rise, a period unique in market history since secondary stocks continued to rise throughout an entire bear market in the averages. In view of this history, where do we now fmd ourselves We are three months into an ex- pansion of the ratio, these expansions in the past having averaged more than 14 months in length. -The end of past expansion phases. in all cases but one. have led the eventual market high by — periods of one year to two years. It is. to put it mildly, an understatement to say that those who are working themselves into a fit over excessive speculation at this point are being a bit premature. AWTrs ANTHONY W. TABELL DELAFIELD, HARVEY. TAB ELL Dow-Jones Industrials (1200 p.m.) 1085.57 S & P Composite (1200 p.m.) 147.32 Cumulative Index (2/17/83) 1677.35 No statement or expressIon of opinion or ony other maHer herem conlamed IS, or IS to be deemed to be, dIrectly or IndIrectly, an offer r the sollcllahon of an offer to buy or sell anr, secunty referred to or menhoned The matter IS presented merely for the convenIence of the subSCriber While oNe betleve the sources of our Informahon to be rehab e, we In no way repreent or guaranlee lhe accuracy thereof nor of the statements mude hereIn Any action to be taken by the subscrIber should be based on hI! own InveslIgollon ond Informallon Janney Montgomery SCali Inc, as a corporation, and lis offIcers or employees, may now have, or may laler toke, posHlons or lrades In respect 10 any SeCUritIes mentioned In thIS or any future luue, and such posItIon may be different from any vIews now or hereafter eyprened In thu or ony other Issue Janney Montgomery Scott, Inc, whIch IS reglslered WIth the SEC os on Investment adVIsor, may gIve adVICe to ,ts Investment adVISOry and othel customers Independently of ony statements made In lhls or In any other Issue Further informatIon on ony security menhoned hereIn IS available on requesl