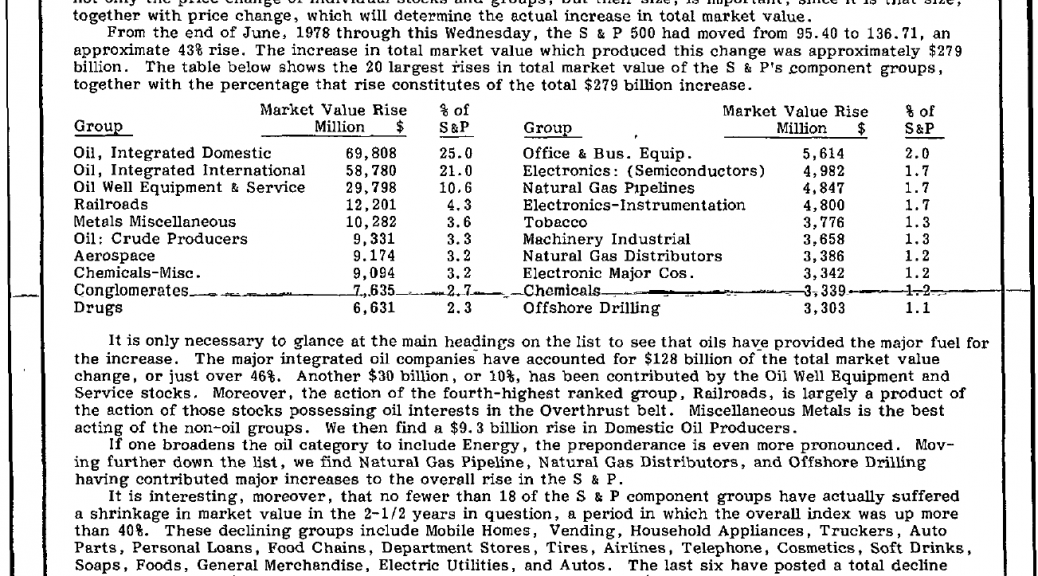 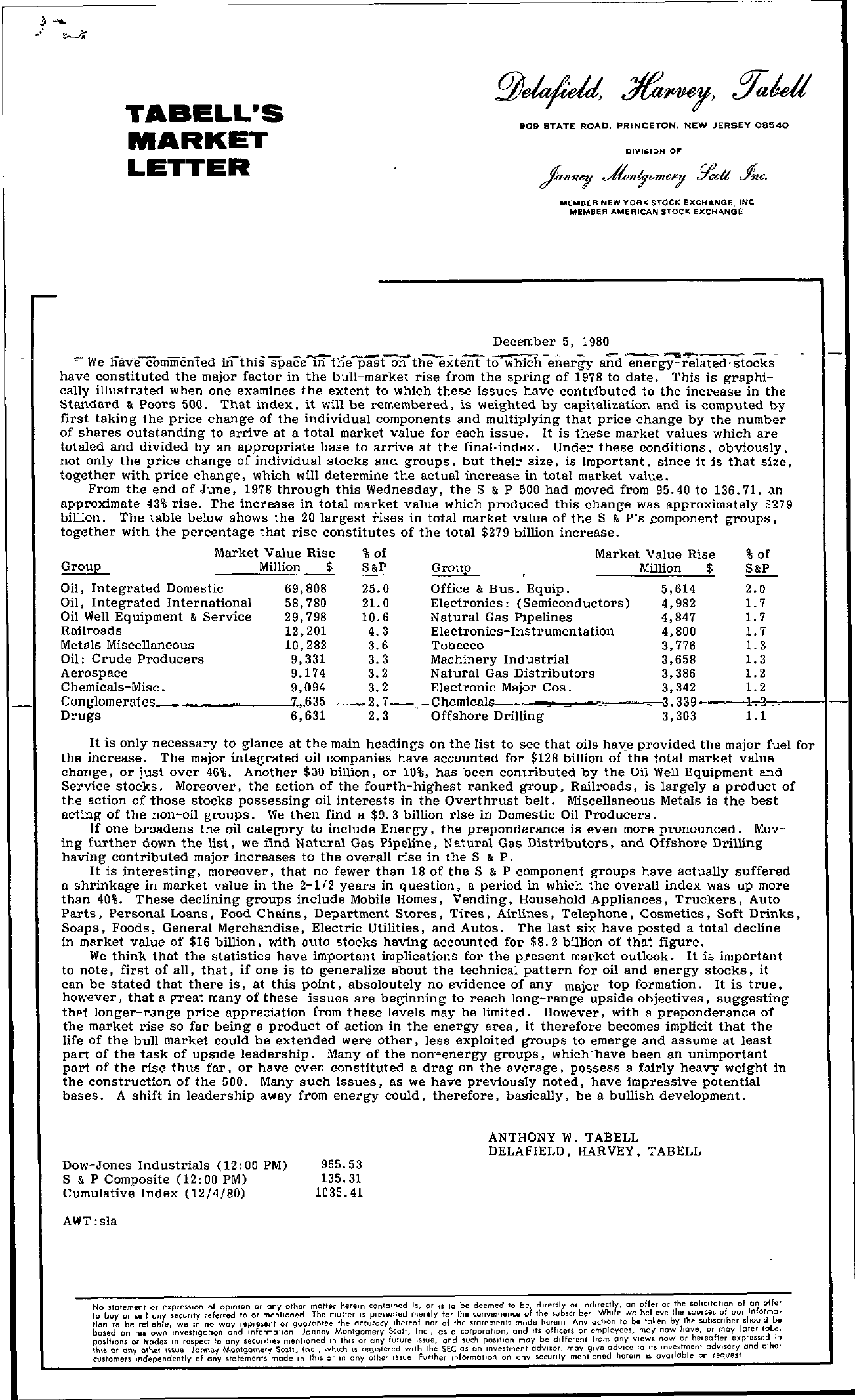 TABELL'S MARKET LETTER 909 STATE ROAD, PRINCETON, NEW JERSEY 08540 DIVISION OF MEMBER NEW YORK STOCK eXCHANGE, INC MEMSER AMERICAN STOCK EXCHANGE December 5, 1980 – – .–….-.—. – – –. We l-ia- v-e -com-m-en-ted I.n–thlS spac- e-ui'!-th…e-p-a-s-t -o-n-th- e ex- te-n-t towhlCh energy and energy-related-stocks have constituted the major factor in the bull-market rise from the spring of 1978 to date. This is graphically illustrated when one examines the extent to which these issues have contributed to the increase in the Standard &. Poors 500. That index, it will be remembered, is weighted by capitalization and is computed by first taking the price change of the individual components and multiplying that price change by the number of shares outstanding to arrive at a total market value for each issue. It is these market values which are totaled and divided by an appropriate base to arrive at the final index . Under these conditions, obviously, not only the price change of individual stocks and groups, but their size, is important, since it is that size, together with price change, which will determine the actual increase in total market value. From the end of June, 1978 through this Wednesday, the S & P 500 had moved from 95.40 to 136.71, an approximate 43 rise. The increase in total market value which produced this change was approximately 279 billion. The table below shows the 20 largest rises in total market value of the S & P's .component groups, together with the percentage that rise constitutes of the total 279 billion increase. Group Market Value Rise of Million S&p Group Market Value Rise Million of S&P Oil, Integrated Domestic Oil, Integrated International Oil Well Equipment & Service Railroads Metals Miscellaneous Oil Crude Producers Aerospace Chemicals-Misc. Conglomerates Drugs 69,808 58,780 29,798 12,201 10,282 9,331 9.174 9,094 6,631 25.0 21. 0 Office & Bus. Equip. Electronics (Semiconductors) 10.6 Natural Gas PIpelines 4.3 Electronics-Instrumentation 3.6 Tobacco 3.3 Machinery Industrial 3.2 Natural Gas Distributors 3.2 Electronic Major Cos. 2….7 Chemicals ..– 2.3 Offshore Drilling 5,614 4,982 4,847 4,800 3,776 3,658 3,386 3,342 3,303 2.0 1. 7 1. 7 1. 7 1.3 1. 3 1. 2 1.2 1.1 It is only necessary to glance at the main heaiins on the list to see that oils ha'Ce provided the major fuel for the increase. The major integrated oil companies have accounted for 128 billion of the total market value change, or just over 46. Another 30 billion, or 10, has been contributed by the Oil Well Equipment and Service stocks. Moreover, the action of the fourth-highest ranked group, Railroads, is largely a product of the action of those stocks possessing oil interests in the Overthrust belt. Miscellaneous Metals is the best acting of the non-oil groups. We then find a 9.3 billion rise in Domestic Oil Producers. If one broadens the oil category to include Energy, the preponderance is even more pronounced. Moving further down the list, we find Natural Gas Pipeline, Natural Gas Distributors, and Offshore Drilling having contributed major increases to the overall rise in the S & P. It is interesting, moreover, that no fewer than 18 of the S &. P component groups have actually suffered a shrinkage in market value in the 2-1/2 years in question, a period in which the overall index was up more than 40. These declining groups include Mobile Homes, Vending, Household Appliances, Truckers, Auto Parts. Personal Loans, Food Chains, Department Stores, Tires, Airlines, Telephone, Cosmetics, Soft Drinks, Soaps, Foods, General Merchandise, Electric Utilities, and Autos. The last six have posted a total decline in market value of 16 billion, with auto stocks having accounted for 8.2 billion of that figure. We think that the statistics have important implications for the present market outlook. It is important to note. first of all, that, if one is to generalize about the technical pattern for oil and energy stocks, it can be stated that there is. at this point. absoloutely no evidence of any major top formation. It is true, however, that a ,reat many of these issues are beginning to reach long-range upside objectives, suggesting that longer-range price appreciation from these levels may be limited. However, with a preponderance of the market rise so far being a product of action in the energy area, it therefore becomes implicit that the life of the bull market could be extended were other, less exploited groups to emerge and assume at least part of the task of upslde leadership. Many of the non-energy groups, which-have been an unimportant part of the rise thus far, or have even constituted a drag on the average, possess a fairly heavy weight in the construction of the 500. Many such issues, as we have previously noted, have impressive potential bases. A shift in leadership away from energy could, therefore, basically, be a bullish development. Dow-Jones Industrials (12 00 PM) S & P Composite (1200 PM) Cumulative Index (12/4/80) AWTsla 965.53 135.31 1035.41 ANTHONY W. TABELL DELAFIELD, HARVEY, TABELL No statement or expression of opln1On or any other mailer herein contal!'led Is, or IS 10 be deemed to be, directly or indirectly, on offer or the soliCitation of an offer to buy or sell any security referred to or mentioned The matter IS presenled merely for the canve!lence of the subscriber While e believe the sources of our Informa- tion to be reliable, we In no way represent or guarantee Ihe accuracy thereof nor of the statements mude herein Any ocllon to be by the subSCriber should bl! based on hl5 own investigation and Informal Ion Jonney Montgomery call, Inc, 0 a corporation, and Its officers or employees, may now have, or may later tole, or trades in respect 10 any securolles melliioned In thiS or any future ISSUe, and such position may be different from any views now or hereafter expressedhIn Ihlt ar d'rly other Inue Janney Mo('lt9omery Soott, , which IS registered With the SEC as on Investment adVisor, may give adVice la Its Investment adVisory ond 01 el independently of any statements mode In thiS or In any other Issue Further Information on any security mentioned herein IS ovacloble on request