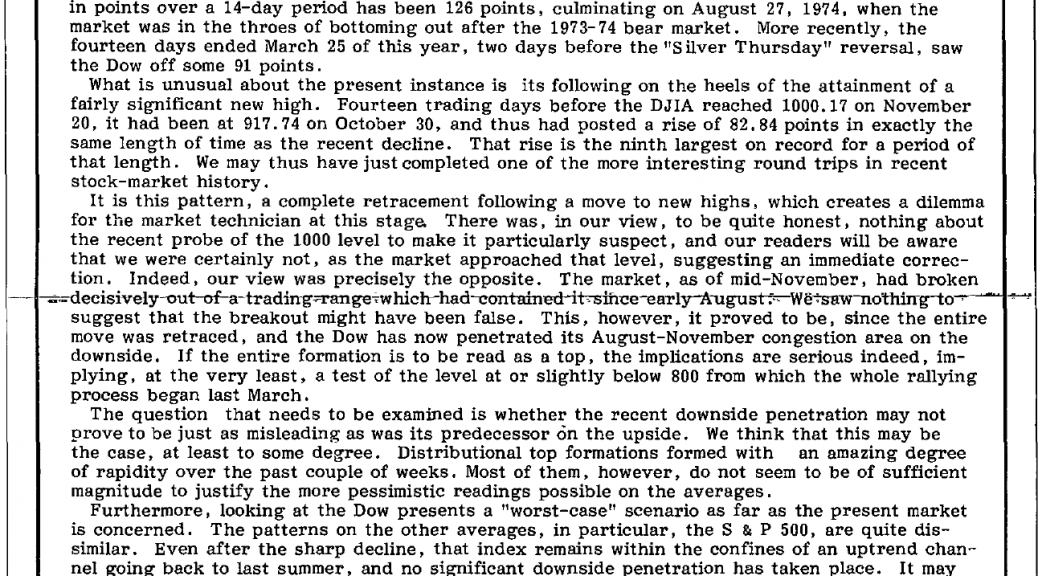 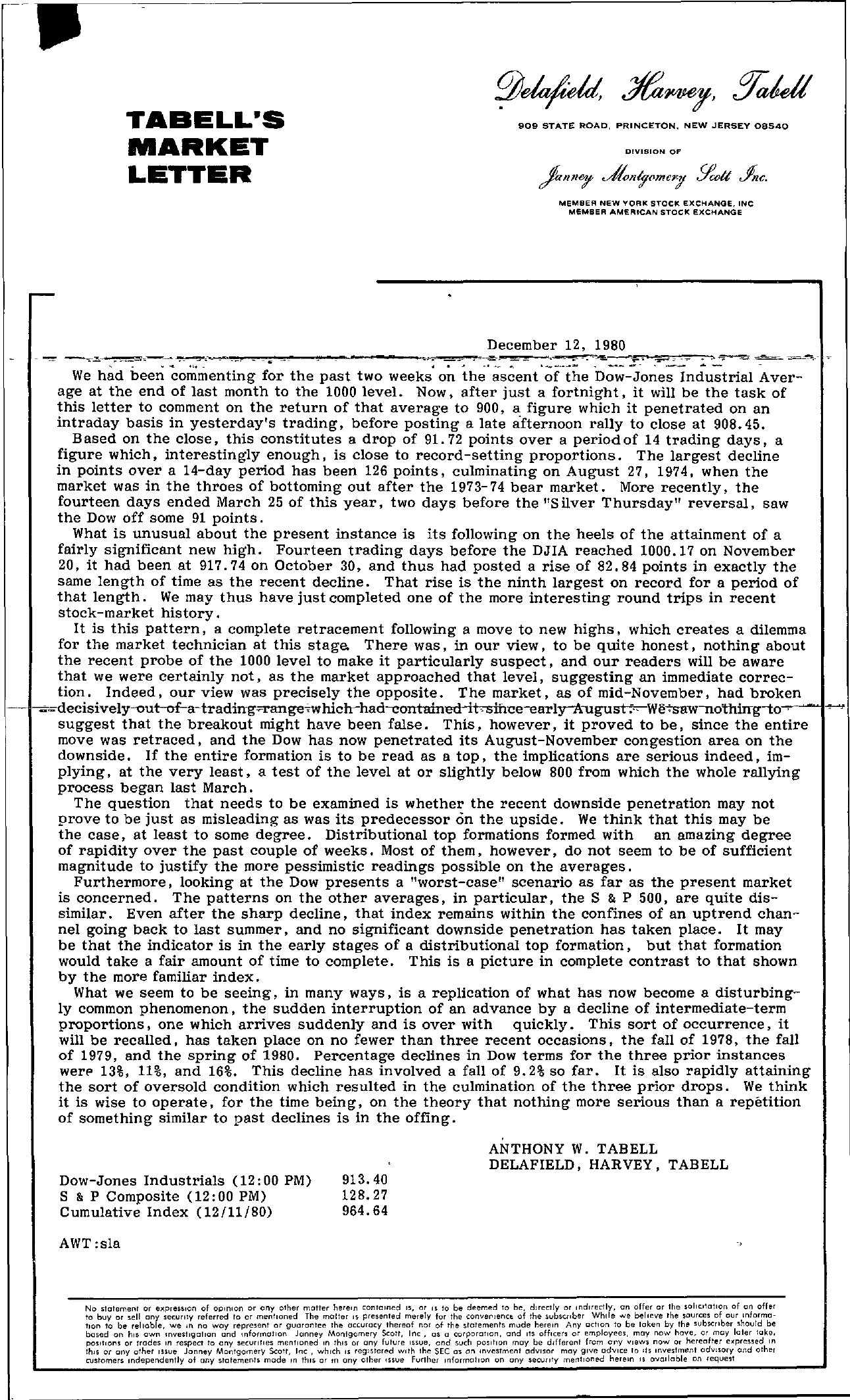 TABELL-S MARKET LETTER 909 STATE ROAD, PRINCETON. NEW JERSEY 08540 DIVISION OF MEMBER NEW YORk STOCI( EXCHANGe, INC MEMBER AMERICAN STOel( EXCHANGe –'-2. …… –.,. ..-'December 12, 1980 .., . We had been for the past two weeks' oi-t Indu-;trial Aver- age at the end of last month to the 1000 level. Now, after just a fortnight, it will be the task of this letter to comment on the return of that average to 900, a figure which it penetrated on an intraday basis in yesterday's trading, before posting a late afternoon rally to close at 908.45. Based on the close, this constitutes a drop of 91. 72 points over a period of 14 trading days, a figure which, interestingly enough, is close to record-setting proportions. The largest decline in points over a 14-day period has been 126 points, culminating on August 27, 1974, when the market was in the throes of bottoming out after the 1973-74 bear market. More recently, the fourteen days ended March 25 of this year, two days before the S fiver Thursday reversal, saw the Dow off some 91 points. What is unusual about the present instance is its following on the heels of the attainment of a fairly significant new high. Fourteen trading days before the DJIA reached 1000.17 on November 20, it had been at 917.74 on October 30, and thus had posted a rise of 82.84 points in exactly the same length of time as the recent decline. That rise is the ninth largest on record for a period of that length. We may thus have just completed one of the more interesting round trips in recent stock-market history. It is this pattern, a complete retracement following a move to new highs, which creates a dilemma for the market technician at this stage. There was, in our view, to be quite honest, nothing about the recent probe of the 1000 level to make it particularly suspect, and our readers will be aware that we were certainly not, as the market approached that level, suggesting an immediate correction. Indeed, our view was precisely the opposite. The market, as of mid-November, had broken – suggest that the breakout might have been false. This, however, it proved to be, since the entire move was retraced, and the Dow has now penetrated its August-November congestion area on the downside. If the entire formation is to be read as a top, the implications are serious indeed, implying, at the very least, a test of the level at or slightly below 800 from which the whole rallying process began last March. The question that needs to be examined is whether the recent downside penetration may not prove to be just as misleading as was its predecessor on the upside. We think that this may be the case, at least to some degree. Distributional top formations formed with an amazing degree of rapidity over the past couple of weeks. Most of them, however, do not seem to be of sufficient magnitude to justify the more pessimistic readings possible on the averages. Furthermore, looking at the Dow presents a worst-case scenario as far as the present market is concerned. The patterns on the other averages, in particular, the S & P 500, are quite dissimilar. Even after the sharp decline, that index remains within the confines of an uptrend chan- nel going back to last summer, and no significant downside penetration has taken place. It may be that the indicator is in the early stages of a distributional top formation, but that formation would take a fair amount of time to complete. This is a picture in complete contrast to that shown by the more familiar index. What we seem to be seeing, in many ways, is a replication of what has now become a disturbingly common phenomenon, the sudden interruption of an advance by a decline of intermediate-term proportions, one which arrives suddenly and is over with quickly. This sort of occurrence, it will be recalled, has taken place on no fewer than three recent occasions, the fall of 1978, the faJl of 1979, and the spring of 1980. Percentage declines in Dow terms for the three prior instances wert 13, 11, and 16. This decline has involved a fall of 9.2 so far. It is also rapidly attaining the sort of oversold condition which resulted in the culmination of the three prior drops. We think it is wise to operate, for the time being, on the theory that nothing more serious than a repetition of something similar to past declines is in the offing. Dow-Jones Industrials (12 00 PM) S & P Composite (1200 PM) Cumulative Index (12/11/80) 913.40 128.27 964.64 ANTHONY W. TAB ELL DELAFIELD, HARVEY, TAB ELL AWTsla No Ictement or expression of opinion or ony other matter here'n contolned IS, or IS to be deemed to be, directly or ,nd,rectly. on offer or the soliCitation of on offer 10 buy or sell any security referred to or mentioned The matter IS presented merely for the converlenCE of the subSCflber While e belIeve the sources of our informa- tion to be relloble, we In no way represent or guarantee the accuracy thereof nor of the statements mude herein Any actIOn to be token by the subSCriber should be based on h,s own investIgatIon and informatIon Janney Montgomery Scott, Inc, as a corporatIon, ond Its off,cers or employees, may now have, or may later toke, POSItIOns or trades In respect to any seCUritIes mentIoned In thIS or any future Issue, and such posItIon may be dIfferent from any vIews now or hereafter expressed In thIS or ony other Issue Janney Montgomery Scott, Inc, whICh IS regIstered WIth the SEC os on Investment adVIsor moy gIve odvlce to ,ts Investment adVIsory and other OJstomers rndependently of ony statements mode III thiS or III any other Issue Further IIlformotlon on any seo.IfIly mentIoned herein IS available on request