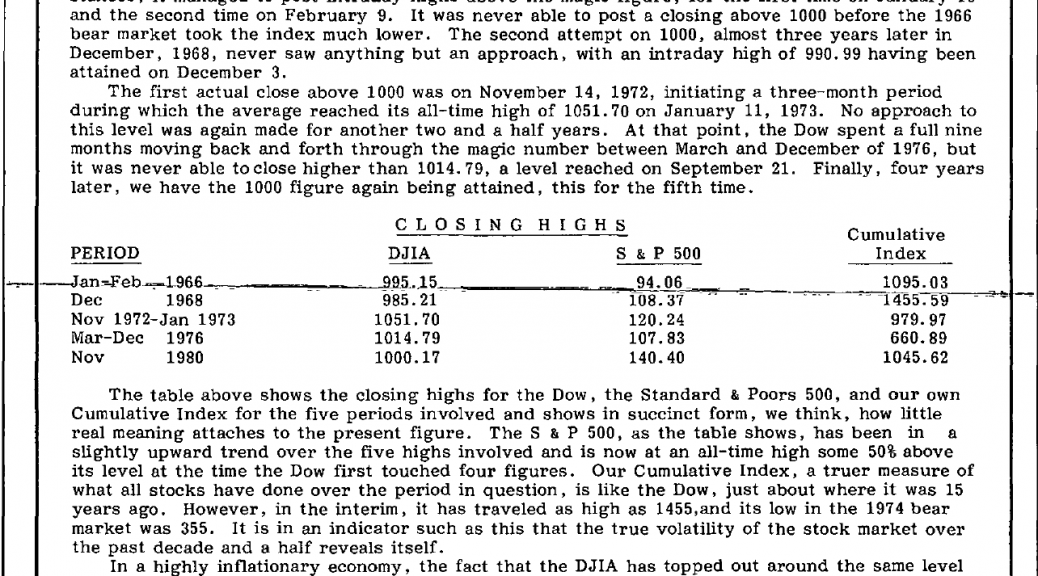 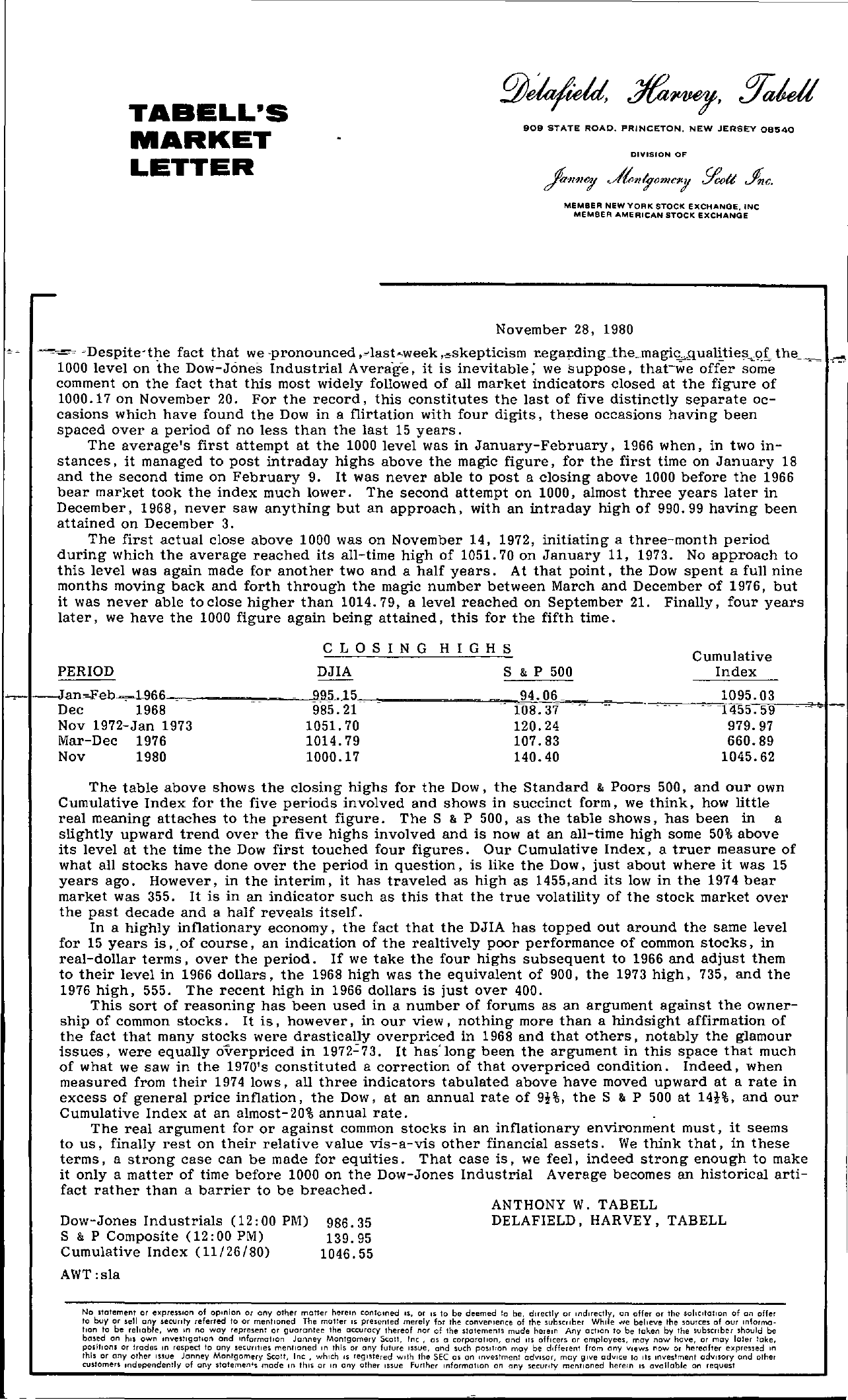 TABELL'S MARKET LETTER 909 STATE ROAD. PRINCETON, NEW JERSEY 08540 DIVISION OF MEMBER NEW YORK STOCK eXCHANOE, INC MEMBER AMERICAN STOCK eXCHANGE November 28, 1980 -' fact that we -pronounced ,.,.skepticism 1000 level on the Dow-Jones Industrial Average, it is inevitable; we suppose, that-we offer some comment on the fact that this most widely followed of all market indicators closed at the figure of 1000.17 on November 20. For the record, this constitutes the last of five distinctly separate oc- casions which have found the Dow in a flirtation with four digits, these occasions having been spaced over a period of no less than the last 15 years. The average's first attempt at the 1000 level was in January-February, 1966 when, in two in- stances. it managed to post intraday highs above the magic figure, for the first time on January 18 and the second time on February 9. It was never able to post a closing above 1000 before the 1966 bear market took the index much lower. The second attempt on 1000, almost three years later in December, 1968, never saw anything but an approach. with an intraday high of 990.99 having been attained on December 3. The first actual close above 1000 was on November 14, 1972, initiating a three-month period during which the average reached its all-time high of 1051. 70 on January 11, 1973. No approach to this level was again made for another two and a half years. At that point, the Dow spent a full nine months moving back and forth through the magic number between March and December of 1976, but it was never able to close higher than 1014.79, a level reached on September 21. Finally, four years later. we have the 1000 figure again being attained. this for the fifth time. PERIOD – Dec 1968 Nov 1972-Jan 1973 Mar-Dec 1976 Nov 1980 CLOSING HI G H S DJIA S & P 500 iJ95..15 — 985.21 1051.70 1014.79 1000.17 94.06 108.37 120.24 107.83 140.40 Cumulative Index 1095.03 1455.59 979.97 660.89 1045.62 The table above shows the closing highs for the Dow, the Standard & Poors 500, and our own Cumulative Index for the five periods involved and shows in succinct form, we think, how little real meaning attaches to the present figure. The S 8. P 500, as the table shows, has been in a slightly upward trend over the five highs involved and is now at an all-time high some 50 above its level at the time the Dow first touched four figures. Our Cumulative Index, a truer measure of what all stocks have done over the period in question, is like the Dow, just about where it was 15 years ago. However, in the interim, it has traveled as high as 1455,and its low in the 1974 bear market was 355. It is in an indicator such as this that the true volatility of the stock market over the past decade and a half reveals itself. In a highly inflationary economy, the fact that the DJIA has topped out around the same level for 15 years is,. of course, an indication of the realtively poor performance of common stocks, in real-dollar terms, over the period. If we take the four highs subsequent to 1966 and adjust them to their level in 1966 dollars, the 1968 high was the equivalent of 900. the 1973 high. 735. and the 1976 high, 555. The recent high in 1966 dollars is just over 400. This sort of reasoning has been used in a number of forums as an argument against the owner- ship of common stocks. It is. however, in our view. nothing more than a hindsight affirmation of the fact that many stocks were drastically overpriced in 1968 and that others. notably the glamour issues, were equally overpriced in It has' long been the argument in this space that much of what we saw in the 1970's constituted a correction of that overpriced condition. Indeed, when measured from their 1974 lows. all three indicators tabulated above have moved upward at a rate in excess of general price inflation. the Dow, at an annual rate of 9H. the S 8. P 500 at 14H, and our Cumulative Index at an almost-20 annual rate. The real argument for or against common stocks in an inflationary environment must, it seems to us, finally rest on their relative value vis-a-vis other financial assets. We think that, in these terms. a strong case can be made for equities. That case is, we feel. indeed strong enough to make it only a matter of time before 1000 on the Dow-Jones Industrial Average becomes an historical arti- fact rather than a barrier to be breached. ANTHONY W. TAB ELL Dow-Jones Industrials (12 00 PM) 986.35 S & P Composite (12 00 PM) 139.95 Cumulative Index (11/26/80) 1046.55 DELAFIELD, HARVEY, TABELL AWTsla No stalement or expreSSion of opinion or any other moHer herein contolned IS, or IS 10 be deemed to be, directly or ,ndirectly, on offer or the soliCitation of on offer 10 buy or sell any security referred 10 or mentioned The mOiler 15 presented merely for Ihe conver'lence of the subscriber While oNe believe the sources of our information to be reliable, we In no way represent or guarantee the accuracy thereof nor of the statements mude herein Any action to be token by the subscriber should be based on hIS own investigation and information Janney Montgomery SCali, Inc, as a corporation, and lIS officers or employees, may now have, or may later take, p051tlons or trades In respect to any securities mentioned In this or any future Issue, and such pOSlhon may be different from any Views now or hereafter expressed In this or any other Issue Janney Montgomery Scali, Inc, which IS registered With the SEC as an Investment adVisor, may give adVice to Its Investment adVisory and othel customers Independently of any stalemen's made In Ihls or In ony olher Issue Further Information on any security mentioned herem IS avaUahle on requesl