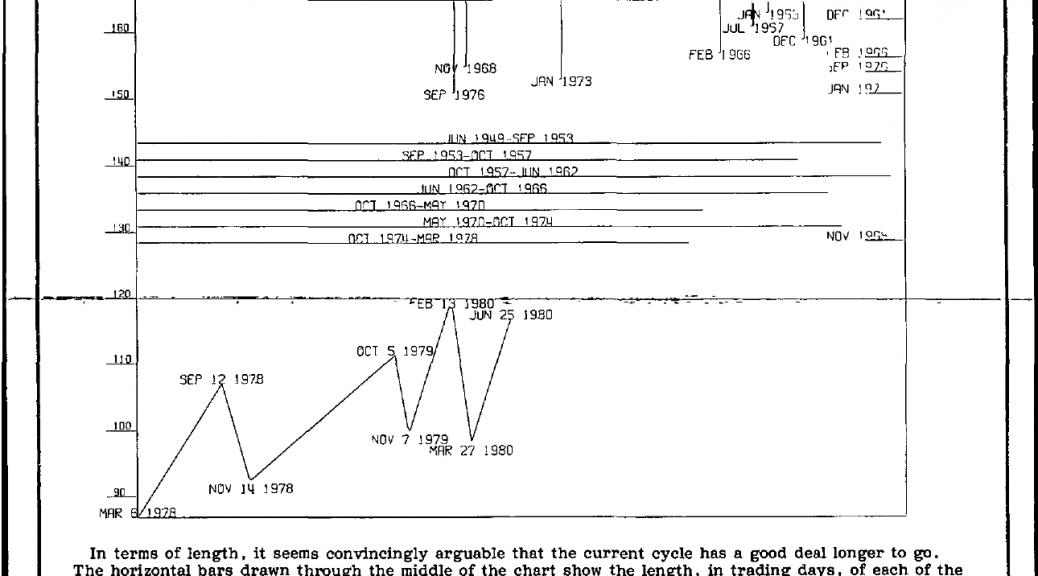 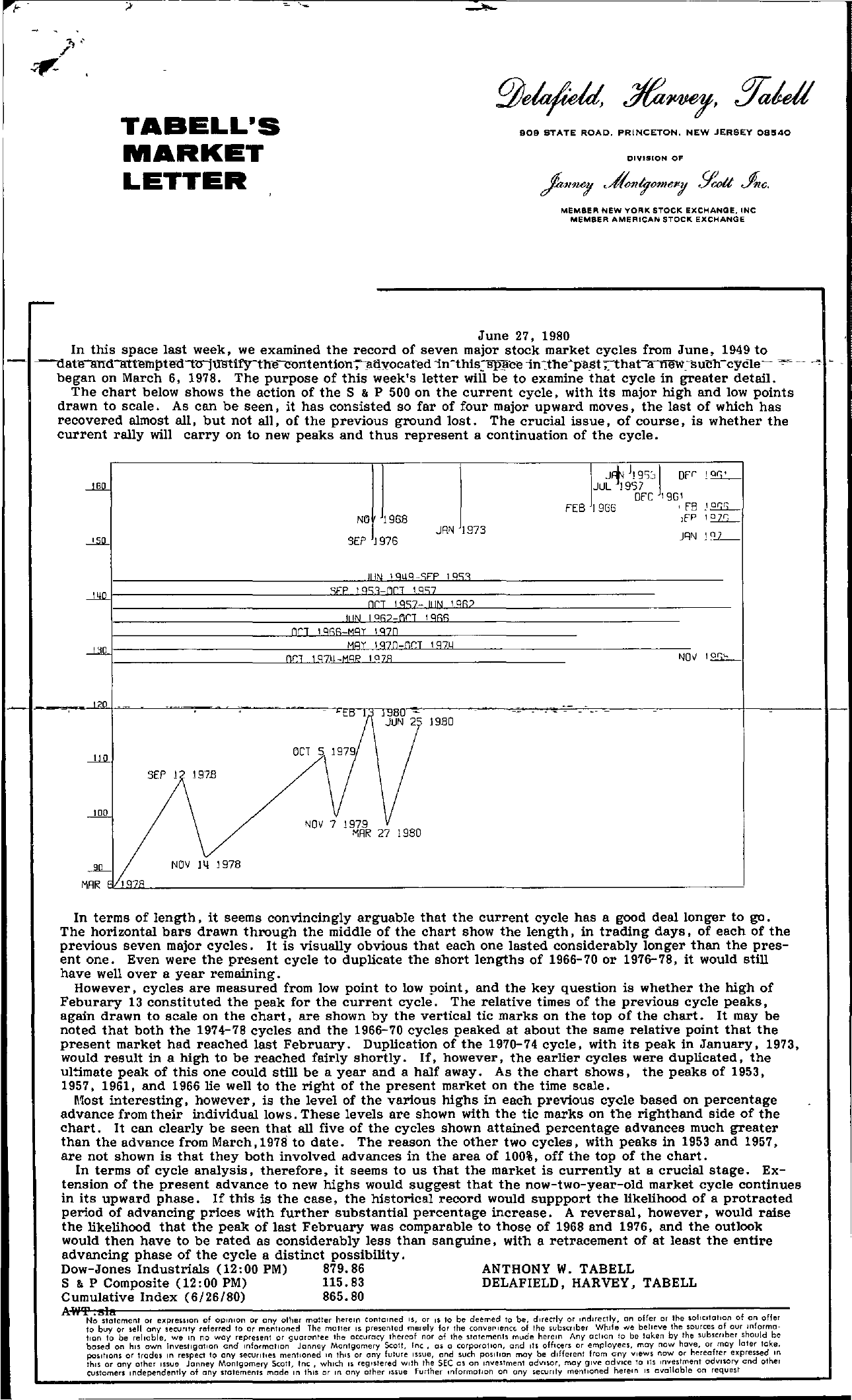 TABELL'S MARKET LETTER 909 STATE ROAD, PRINCETON. NEW JERSEY 081540 DIVISION OF MEMBER NEW YORK STOCK EXCHANGE, INC MEMBER AMERICAN STOCK EXCHANGE June 27, 1980 In this space last week, we examined the record of seven major stock market cycles from June, 1949 to in-thissPl'l!e thaCa newsuch-cyCle- u began on March 6, 1978. The purpose of this week's letter will be to examine that cycle in greater detail. The chart below shows the action of the S & P 500 on the current cycle, with its major high and low points drawn to scale. As can be seen, it has consisted so far of four major upward moves, the last of which has recovered almost all, but not all, of the previous ground lost. The crucial issue, of course, is whether the current rally will carry on to new peaks and thus represent a continuation of the cycle. – NO 19GB SEP 1976 JRN 1973 jJ, J! 9S, DFr JtJL 19S) DEC 190 1 FEB 1906 ' FB P Jg, HIN 19L1qSFP 1953 F 15 , OCT 1957- !lIN 1962 II IN 10620C1 1966 r y \ r r 10 19BO 100 .JllL MAR NOV 7 1979 MAR 27 1980 NOV 14 1978 In terms of length, it seems convincingly arguable that the current cycle has a good deal longer to go. The horizontal bars drawn through the middle of the chart show the length, in trading days, of each of the previous seven major cycles. It is visually obvious that each one lasted considerably longer than the present one. Even were the present cycle to duplicate the short lengths of 1966-70 or 1976-78, it would still have well over a year remaining. However, cycles are measured from low point to low point, and the key question is whether the high of Feburary 13 constituted the peak for the current cycle. The relative times of the previous cycle peaks, again drawn to scale on the chart, are shown by the vertical tic marks on the top of the chart. It may be noted that both the 1974-78 cycles and the 1966-70 cycles peaked at about the same relative point that the present market had reached last February. Duplication of the 1970-74 cycle, with its peak in January, 1973, would result in a high to be reached fairly shortly. If, however, the earlier cycles were duplicated, the ultimate peak of this one could still be a year and a half away. As the chart shows, the peaks of 1953, 1957, 1961, and 1966 lie well to the right of the present market on the time scale. Most interesting, however, is the level of the various highs in each previous cycle based on percentage advance from their individual lows. These levels are shown with the tic marks on the righthand side of the chart. It can clearly be seen that all five of the cycles shown attained percentage advances much greater than the advance from March,1978 to date. The reason the other two cycles, with peaks in 1953 and 1957, are not shown is that they both involved advances in the area of 100, off the top of the chart. In terms of cycle analysis, therefore, it seems to us that the market is currently at a crucial stage. Ex- tension of the present advance to new highs would suggest that the now-two-year-old market cycle continues in its upward phase. If this is the case, the historical record would suppport the likelihood of a protracted period of advancing prices with further substantial percentage increase. A reversal, however, would raise the likelihood that the peak of last February was comparable to those of 1968 and 1976, and the outlook would then have to be rated as considerably less than sanguine, with a retracement of at least the entire advancing phase of the cycle a distinct possibility. Dow-Jones Industrials (12 00 PM) 879.86 S & P Composite (1200 PM) 115.83 Cumulative Index (6/26/80) 865.80 ANTHONY W. TABELL DELAFIELD, HARVEY, TABELL AW'f!No. ssitoatement or expresSIon of opInion or any olher moiler herein contOlned 15, or 15 to be deemed to be. directly or indirectly, on offer or Ihc soI ICltatlOn 0f on a ff er to buy or sell any security referred to or mentioned The moiler IS presented merely for the of the subscriber While -Ne believe Ihe sources of our informa- tion to be reliable, we In no way represent or guorl'nlee the accuracy thereof nor of the statements mude herein Any action to be token by the subscriber should be based on hiS own Investigation and Information Janney Montgomery Scoll, Inc, as a corporotlon, and Its officers or employees, may now have, or may later take, positions or trades In respect to any securities menhoned In Ihls or any future Issue, and such posItion moy be different from any views now or hereafter expressed In thiS or any other Issue Janney Montgomery Scott, Inc, which IS registered With the SEC as on Iflvestmenl adVISor, may give adVice to lis Investment advl10ry and other customers rndependently of any statements made rn thiS r In any other Issue Furlher Information on any securrty mentroned herein rs avollable on request