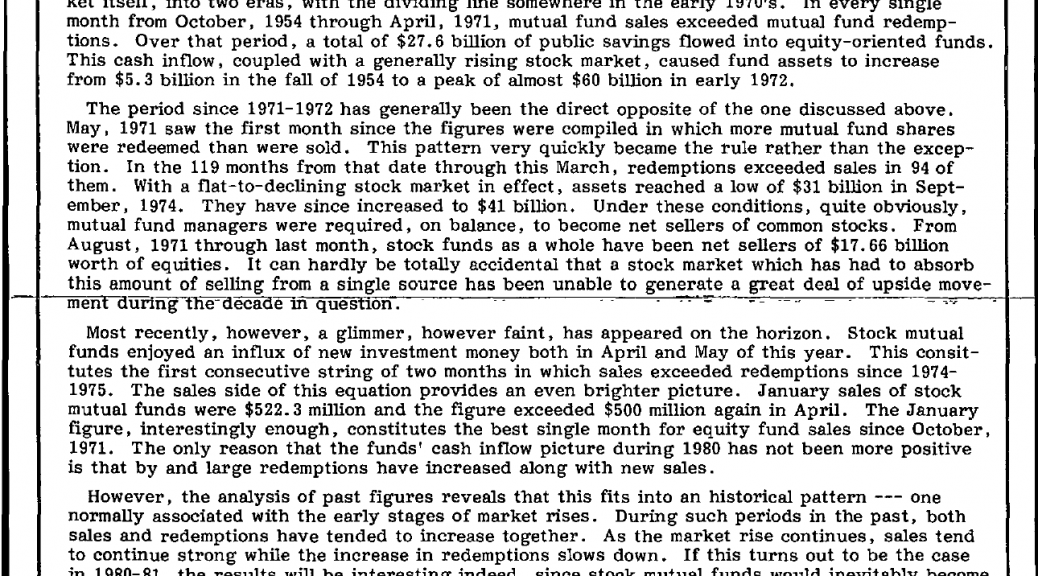 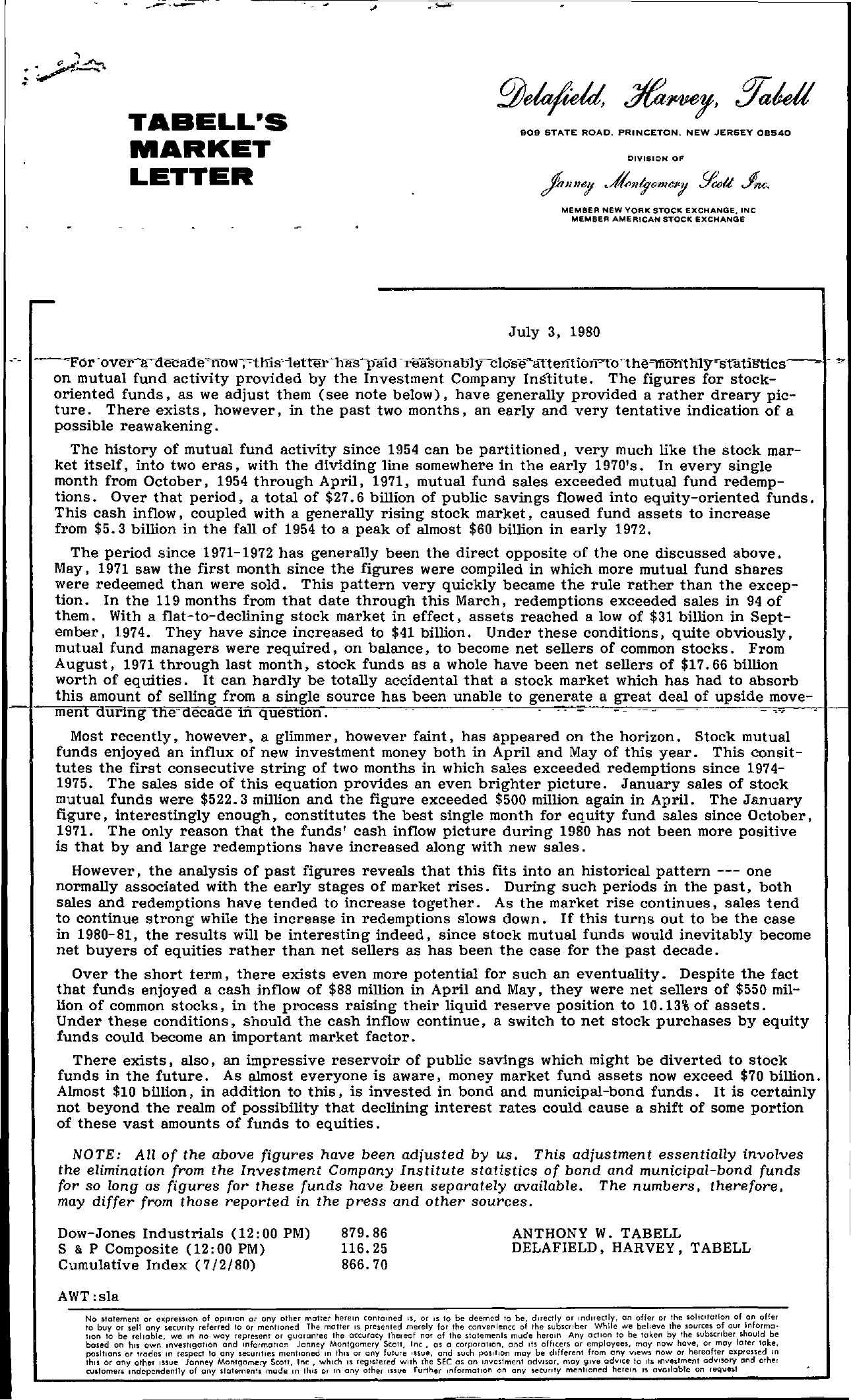 TABELL'S MARKET LETTER 909 STA.TE ROAD. PRINCETON. NEW JER6EY 08540 DIYISION OF MEMBER NEW VORK STOCK EXCHANGE, INC MEMBER AMERICAN STOCK EXCHANGE – July 3, 1980 -For. – on mutual fund activity provided by the Investment Company Institute. The figures for stock- oriented funds, as we adjust them (see note below), have generally provided a rather dreary pic- ture. There exists, however, in the past two months, an early and very tentative indication of a possible reawakening. – ' The history of mutual fund activity since 1954 can be partitioned, very much like the stock market itself, into two eras, with the dividing line somewhere in the early 1970's. In every single month from October, 1954 through April, 1971, mutual fund sales exceeded mutual fund redemptions. Over that period, a total of 27.6 billion of public savings flowed into equity-oriented funds. This cash inflow, coupled with a generally rising stock market, caused fund assets to increase from 5.3 billion in the fall of 1954 to a peak of almost 60 billion in early 1972. The period since 1971-1972 has generally been the direct opposite of the one discussed above. May, 1971 saw the first month since the figures were compiled in which more mutual fund shares were redeemed than were sold. This pattern very quickly became the rule rather than the excep- tion. In the 119 months from that date through this March, redemptions exceeded sales in 94 of them. With a flat-to-declining stock market in effect, assets reached a low of 31 billion in Sept- ember, 1974. They have since increased to 41 billion. Under these conditions, quite obviously, mutual fund managers were required, on balance, to become net sellers of common stocks. From August, 1971 through last month, stock funds as a whole have been net sellers of 17.66 billion worth of equities. It can hardly be totally accidental that a stock market Which has had to absorb this amount of selling from a single source has been unable to generate a great deal of upside move- ment during tne-decade ill quesuon. . Most recently, however, a glimmer, however faint, has appeared on the horizon. Stock mutual funds enjoyed an influx of new investment money both in April and May of this year. This consittutes the first consecutive string of two months in which sales exceeded redemptions since 19741975. The sales side of this equation provides an even brighter picture. January sales of stock mutual funds were 522.3 million and the figure exceeded 500 million again in April. The January figure, interestingly enough, constitutes the best single month for equity fund sales since October. 1971. The only reason that the funds' cash inflow picture during 1980 has not been more positive is that by and large redemptions have increased along with new sales. However, the analysis of past figures reveals that this fits into an historical pattern — one normally associated with the early stages of market rises. During such periods in the past, both sales and redemptions have tended to increase together. As the market rise continues, sales tend to continue strong while the increase in redemptions slows down. If this turns out to be the case in 1980- 81, the results will be interesting indeed, since stock mutual funds would inevitably become net buyers of equities rather than net sellers as has been the case for the past decade. Over the short term, there exists even more potential for such an eventuality. Despite the fact that funds enjoyed a cash inflow of 88 million in April and May, they were net sellers of 550 million of common stocks, in the process raising their liquid reserve position to 10.13 of assets. Under these conditions, should the cash inflow continue, a switch to net stock purchases by equity funds could become an important market factor. There exists, also, an impressive reservoir of public savings which might be diverted to stock funds in the future. As almost everyone is aware, money market fund assets now exceed 70 billion. Almost 10 billion, in addition to this, is invested in bond and municipal-bond funds. It is certainly not beyond the realm of possibility that declining interest rates could cause a shift of some portion of these vast amounts of funds to equities. NOTE All of the above figures have been adjusted by us. This adjustment essentially involves the elimination from the Investment Company Institute statistics of bond and municipal-bond funds for so long as figures for these funds have been separately available. The numbers, therefore. may differ from those reported in the press and other sources. Dow-Jones Industrials (12 00 PM) S & P Composite (1200 PM) Cumulative Index (7/2/80) 879.86 116.25 866.70 ANTHONY W. TABELL DELAFIELD, HARVEY, TABELL AWTsla No statement or expression of opinion or any other molter herein contained 1, or IS 10 be deemed to be, directly or indirectly, on offer or the 50ile,lollon of on offer to buy or sell ony secunty referred 10 or mentioned The mOiler IS presented merely for the converlenct of the While He believe the sources of our Informe tlon to be reliable, we In no way represent or guarantee the accuracy thereof nor of the statements mude herein Any action to be token by the subscriber should be based on hIS own investigation and Information Janney Montgomery SCali, Inc, as a corporation, and Its officers or employees, may now have, or may later toke, positions or trades In respect to any securities menl10ned In thIS or any future Issue, and such pOSitIOn may be different from any views now or hereofter expreued In thiS or any other Issue Janney Montgomery Scott, Inc, which IS reg!Slered With Ihe SEC as on Investment adVIsor, may give adVice to 115 Investment adVisory clnd othel customers IndCpc!ndently of any statements mode In thiS or In any other Issue Further information on any security mentioned herein IS available on request