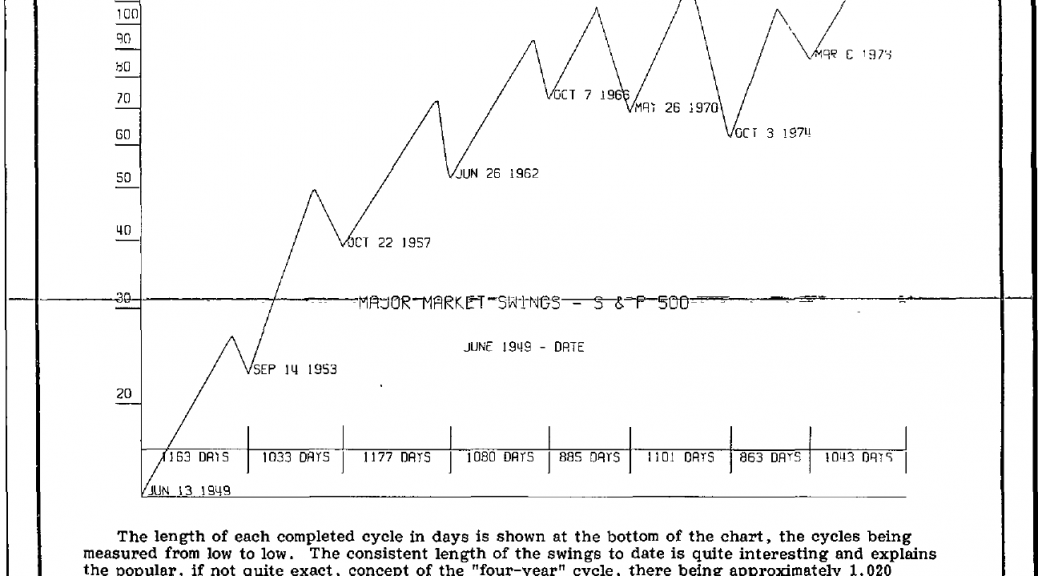 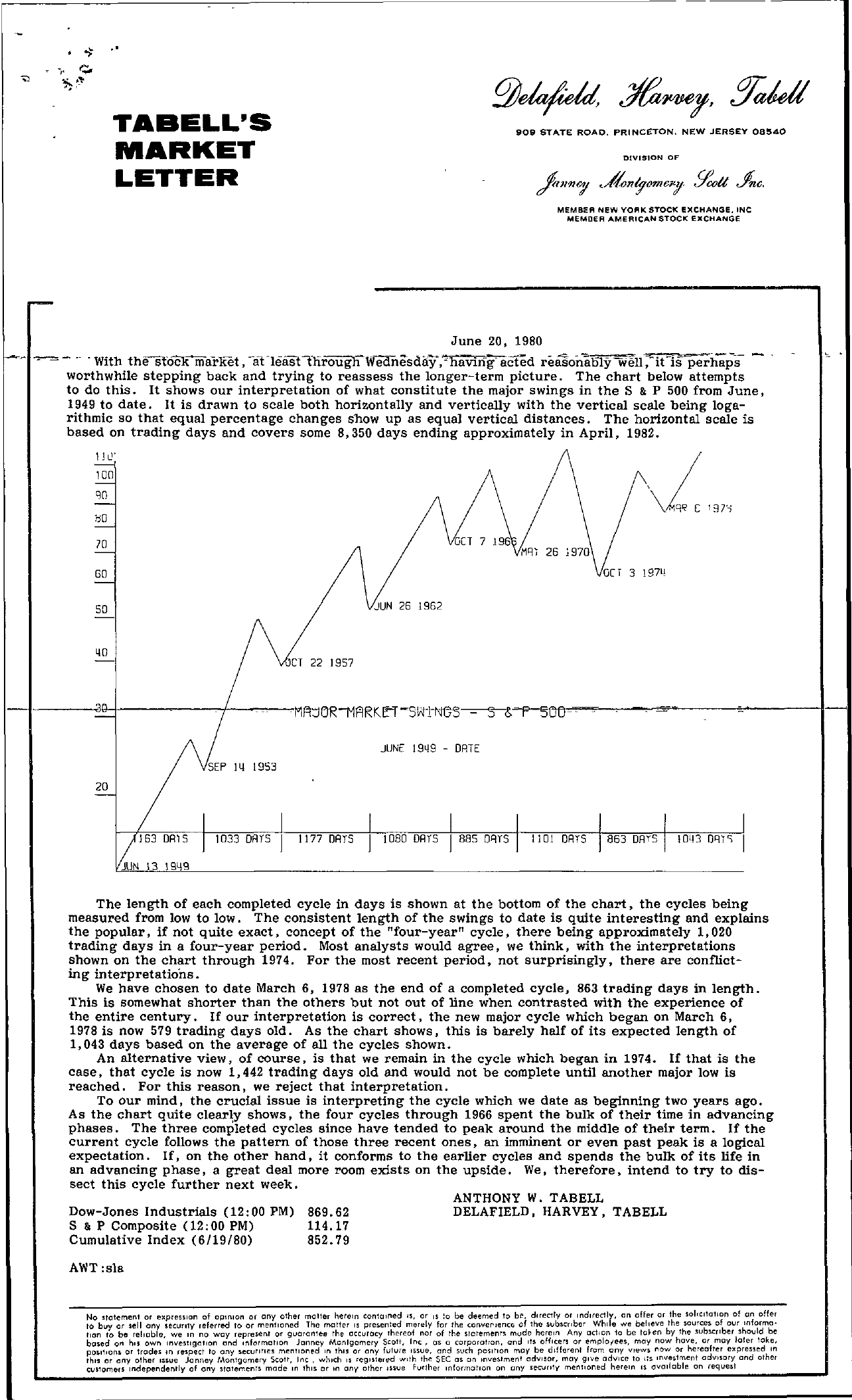 .; .!' ' .. TABELL'S MARKET LETTER 909 STATE ROAD, PRINCi!TON, NEW JERSEY 08540 DIVISION OF MEMBER NEW YOAK STOCK EXCHANGE, INC MEMDEA AMERICAN STOCK EXCHANGE June 20, 1980 – – With thesfoCkmarket, -arleasttlirougnWednesday,having acted reasonalily -ins perhaps- – worthwhile stepping back and trying to reassess the longer-term picture. The chart below attempts to do this. It shows our interpretation of what constitute the major swings in the S & P 500 from June, 1949 to date. It is drawn to scale both horizontally and vertically with the vertical scale being loga- rithmic so that equal percentage changes show up as equal vertical distances. The horizontal scale is based on trading days and covers some 8,350 days ending approximately in April, 1982. lJL!' 100 \ /gO 197'-) 00 70 GO 50 40 SEP 14 1953 20 JUNE 1949 – ORTE I1033 DAYS 1177 OArS 1101 ORrs I1043 oRlS The length of each completed cycle in days is shown at the bottom of the chart, the cycles being measured from low to low. The consistent length of the swings to date is quite interesting and explains the popular, if not quite exact, concept of the four-year cycle, there being approximately 1,020 trading days in a four-year period. Most analysts would agree, we think, with the interpretations shown on the chart through 1974. For the most recent period, not surprisingly, there are conflict- ing interpretations. We have chosen to date March 6, 1978 as the end of a completed cycle, 863 trading days in length. This is somewhat shorter than the others but not out of line when contrasted with the experience of the entire century. If our interpretation is correct, the new major cycle which began on March 6, 1978 is now 579 trading days old. As the chart shows, this is barely half of its expected length of 1,043 days based on the average of all the cycles shown. An alternative view, of course, is that we remain in the cycle which began in 1974. If that is the case, that cycle is now 1,442 trading days old and would not be complete until another major low is reached. For this reason, we reject that interpretation. To our mind, the crucial issue is interpreting the cycle which we date as beginning two years ago. As the chart quite clearly shows, the four cycles through 1966 spent the bulk of their time in advancing phases. The three completed cycles since have tended to peak around the middle of their term. If the current cycle follows the pattern of those three recent ones, an imminent or even past peak is a logical expectation. If, on the other hand, it conforms to the earlier cycles and spends the bulk of its life in an advancing phase, a great deal more room exists on the upside. We, therefore, intend to try to dis- sect this cycle further next week. ANTHONY W. TABELL Dow-Jones Industrials (12 00 PM) 869.62 DELAFIELD, HARVEY, TABELL S & P Composite (12 00 PM) 114.17 Cumulative Index (6/19/80) 852.79 AWTsla No statement or of OpinIOn Of any other molter herein conlolned IS, or IS 0 be deemed to be, directly or ,ndlfectly, an offer or Ihe soliCitation of an offel to buy or sell any seturity referred to or mentioned The matter IS presented merely for the converlenCij of the subs!;nber While we believe the sources of our Informa- tion to be reliable, we In no way represent or guarantee the accuracy thereof nor of the statements mude hen!!n Any actIOn to be by Ihe subSCriber should be based on hi' own Invesllgotlon and Information Janney Montgomery Scott, Inc, os 0 corparollon, and liS officers or emploees, may now have, or may later toke, po,llonl or trades H'I respect to any seCUrities mentioned In thiS or any future Issue, and such pOSition may be different from any views now or hereafter expressed In thiS or any other Issue Janney Montgomery Scott, Inc, which IS registered With the SEC as on Investment adVisor, may give adVice to IS Investment adVisory and olher cuSlomerS Independently of any statements mode In Ih,s or In any other Issue Furlher ,nformation on any seturlly mentioned herein (s cVOllable on request