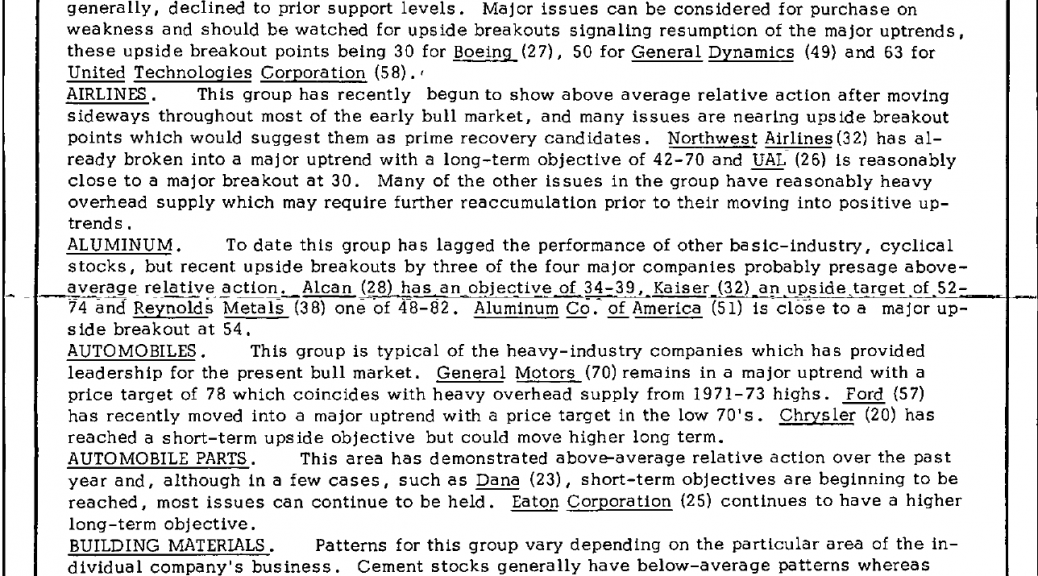 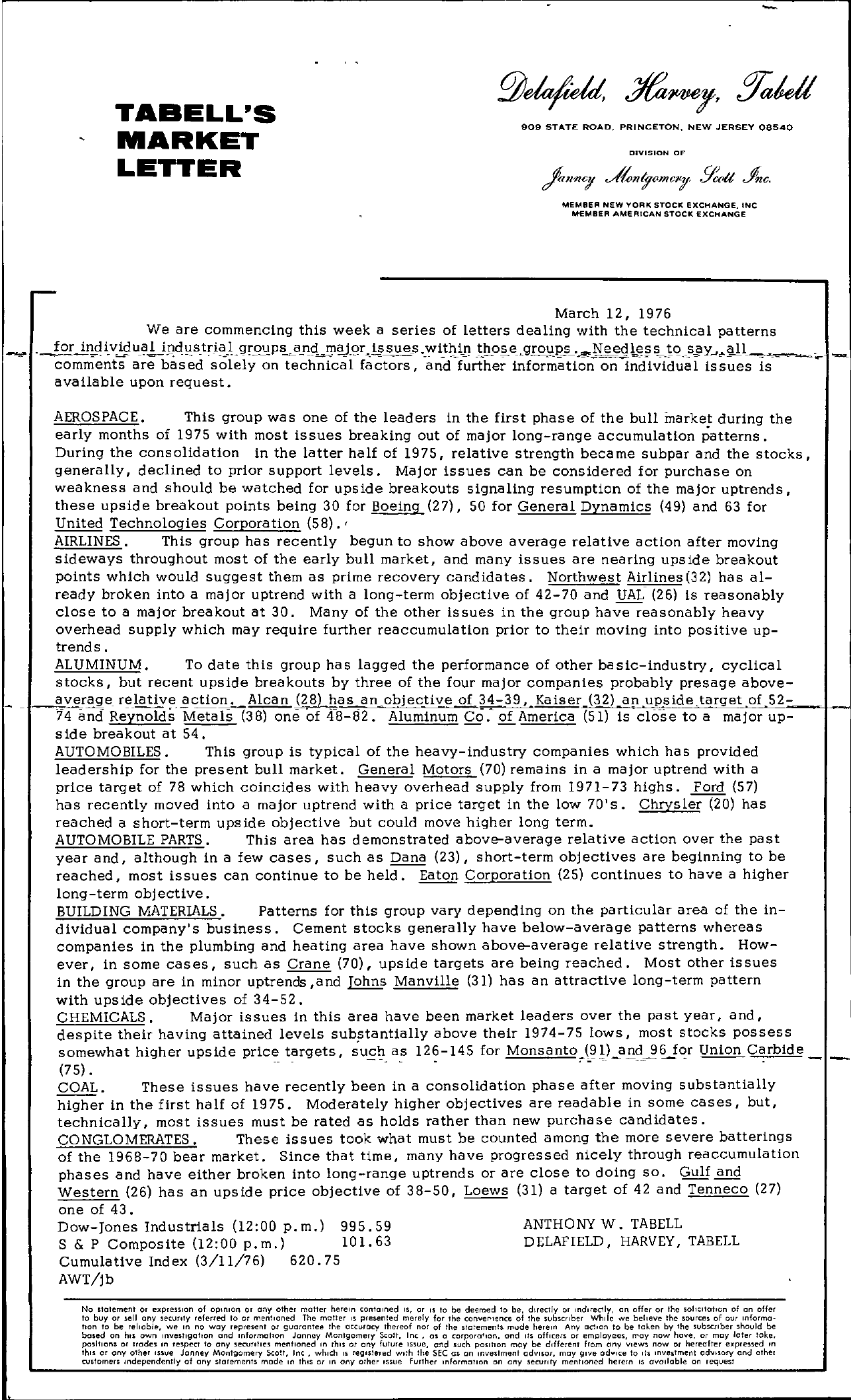 TABELL'S MARKET LETTER 909 STATE ROAD, PRINCETON. NEW JERSEY 08540 DIVISION OF MEHleR NEW VORK STOCK EXCHANGE, INC MEMBER AMERICAN STOCK eXCHANGE March 12, 1976 We are commenCing this week a series of letters dealing with the technical patterns ,f..'!2nd iviQ comments ual are Jndstri based s oaLleglry.oou.npatencd.h,rn)1i,c,!ajl.9fr.ai.ctsoures,s.wanithCtfnurttllhoer.ei.,ngfroourPJalt.'Ai'!;nNOei1ecijlce!!;ivi1d0uaSii'yisauells..I.s, ,- available upon request. -.. AEROSPACE. This group was one of the leaders in the first phase of the bull market during the early months of 1975 with most issues breaking out of major long-range accumulation patterns. During the consolidation in the latter half of 1975, relative strength became subpar and the stocks, generally, declined to prior support levels. Major issues can be considered for purchase on weakness and should be watched for upside breakouts signaling resumption of the major uptrends, these upside breakout pOints being 30 for Boeing (27), 50 for General Dynamics (49) and 63 for United Technologies Corporation (58).' AIRLINES. This group has recently begun to show above average relative action after moving sideways throughout most of the early bull market, and many issues are nearing upside breakout paints which would suggest them as prime recovery candidates. Northwest Airlines (32) has al- ready broken into a major uptrend with a long-term objective of 42-70 and UAL (26) is reasonably close to a major breakout at 30. Many of the other issues in the group have reasonably heavy overhead supply which may require further reaccumulation prior to their moving into positive up- trends. ALUMINUM. To date this group has lagged the performance of other basic-industry, cyclical stocks, but recent upside breakouts by three of the four major companies probably presage above- average relative action. Alcan (28) has an objective of 34-39, Kaiser (32) an upside,target of 52- – –74 and Reynolds'Metals (38) One of 48-82. Aluminum Co.- of America (51) isclbse to a major up- side breakout at 54. AUTOMOBILES. This group is typical of the heavy-industry companies which has provided leadership for the present bull market. General Motors (70) remains in a major uptrend with a price target of 78 which COincides with heavy overhead supply from 1971-73 highs. Ford (57) has recently moved into a major uptrend with a price target in the low 70's. Chrysler (20) has reached a short-term upside objective but could move higher long term. AUTOMOBILE PARTS. This area has demonstrated above-average relative action over the past year and, although in a few cases, such as Dana (23), short-term objectives are beginning to be reached, most issues can continue to be held. Eaton Corporation (25) continues to have a higher long-term objective. BUILDING MATERIALS. Patterns for this group vary depending on the particular area of the in- dividual company's business. Cement stocks generally have below-average patterns whereas companies in the plumbing and heating area have shown above-average relative strength. How- ever, in some cases, such as Crane (70), upside targets are being reached. Most other issues in the group are in minor uptrends ,and Johns Manville (31) has an attractive long-term pattern with upside objectives of 34-52. CHEMICALS. Major issues in this area have been market leaders over the past year, and, despite their having attained levels sub.stantially above their 1974-75 lows, most stocks possess s(7o5m) e. what higher upside price. ta- rgets, su-ch .as.1.26-145 for MonsantoJ!)ar1dJlr ,- — .. Union Ca, rbide COAL. These issues have recently been in a consolidation phase after moving substantially higher in the first half of 1975. Moderately higher objectives are readable in some cases, but, technically, most issues must be rated as holds rather than new purchase candidates. CONGLOMERATES. These issues took what must be counted among the more severe batterings of the 1968-70 bear market. Since that time, many have progressed nicely through reaccumulation phases and have either broken into long-range uptrends or are close to dOing so. Gulf and Western (26) has an upside price objective of 38-50, Loews (31) a target of 42 and Tenneco (27) oneof43. Dow-Jones Industrials (1200 p. m.) 995.59 S & P Composite (1200 p.m.) 101.63 ANTHONY W. TABELL DELAFIELD, HARVEY, TAB ELL Cumulative Index (3/11/76) 620.75 AWT/jb No statement or expreulon of opinion or any other motter herein contained IS, or IS to be deemed to be, directly or Indlrlctly, on offer or the sollcltotlon 01 on offer to buy or sell any security referred to or mentioned The molter IS presented merely for the converlenC6 of the subSCriber While we believe th!! SOUfO'!S of our Informotlon to be reliable, we In no way represent or guarantee Ihe accuracy Ihereof nor of the statements mode herein Any oct,on to be toen by the subSCriber should be bosed on hiS awn mvestlgallon and Information Janney Montgomery Scolt, Inc, os 0 corpora'Ion, and lIs offICers or employees, 1'T'0y now have. or may later toke. positions or trades m respect to ony SeCUrities mentioned m Ihls or any future Issue, and such posilion may be different from any views now or hereafter epressed In thiS or any other Issue Janney Montgomery Scott, Inc. which IS registered wllh the SEC as on mvestment adVisor, may give odvlce to lIs Investment adVisory and othe. customers mdependently of any statements mode m thiS or 1M any other Issue further information on any security mentioned herein IS ovolloble on request