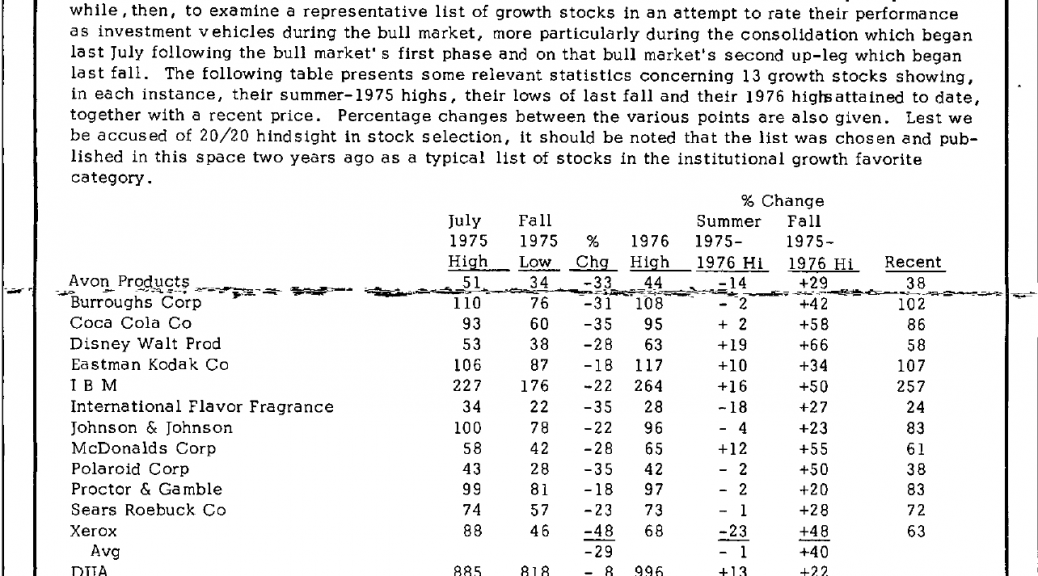 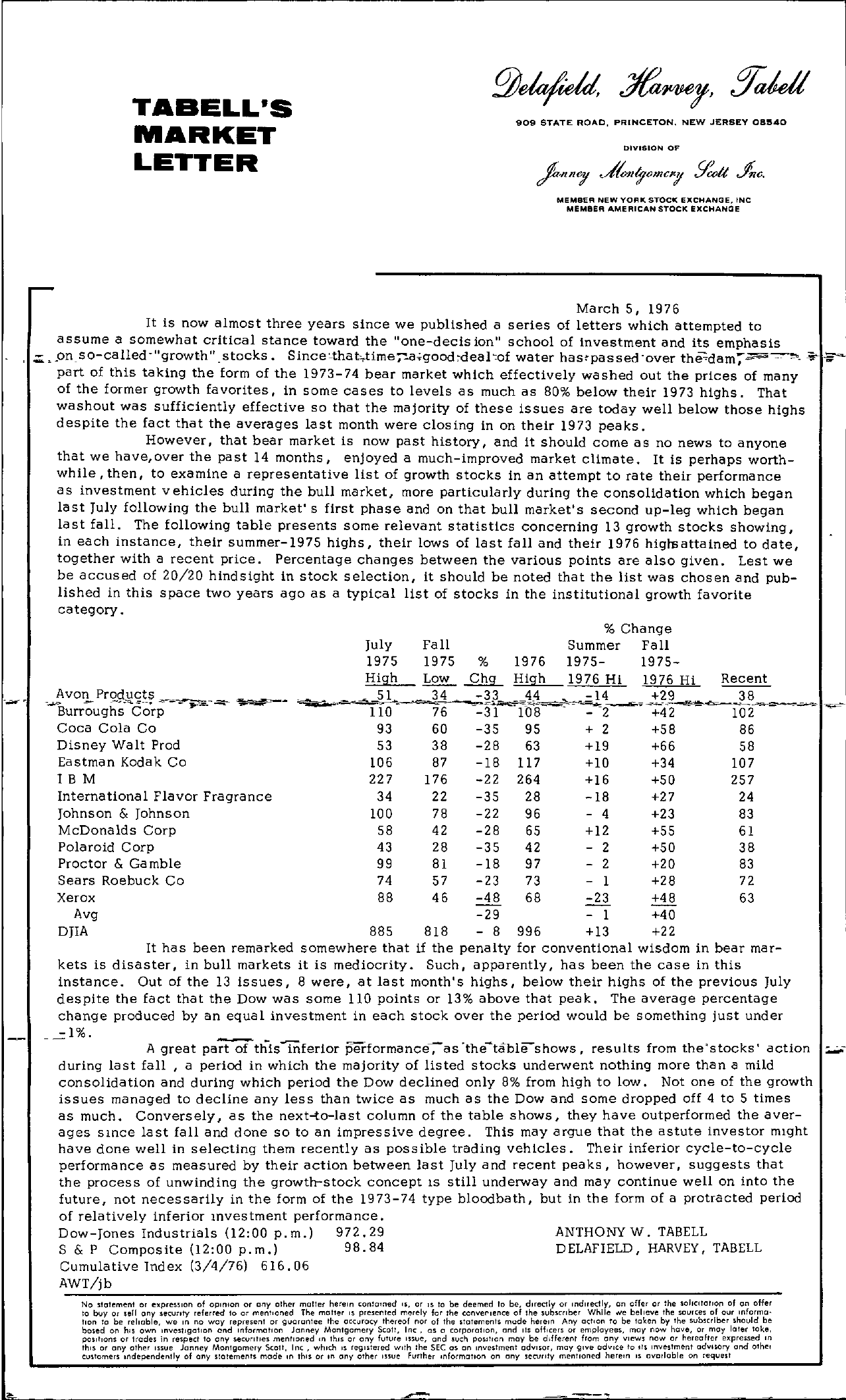 TABELL'S MARKET LETTER 909 STATE ROAD, PRINCETON, NEW JERSEY OBS40 DIVISION OF MEMBER NEW YOAK STOCK EXCHANGE, tNC MEMBER AMERICAN STOCK EXCHANGE March 5, 1976 It is now almost three years since we published a series of letters which attempted to assume a somewhat critical stance toward the one-decis ion school of investment and its emphasis ;;—–.;; . .onso-called-growth stocks. Since'that-time;,,-agood,deal 'of water has'passed -over the;dam-;– part of this taking the form of the 1973-74 bear market which effectively washed out the prices of many of the former growth favorites, in some cases to levels as much as 80 below their 1973 highs. That washout was sufficiently effective so that the majority of these Issues are today well below those highs despite the fact that the averages last month were closing in on their 1973 peaks. However, that bear market is now past history, and it should come as no news to anyone that we have, over the past 14 months, enjoyed a much-improved market climate. It is perhaps worthwhile, then, to examine a representative list of growth stocks in an attempt to rate their performance as investment vehicles during the bull market, more particularly during the consolidation which began last July following the bull market's first phase and on that bull market's second up-leg which began last fall. The following table presents some relevant statistics concerning 13 growth stocks showing, in each instance, their summer-1975 highs, their lows of last fall and their 1976 higt-sattained to date, together with a recent price. Percentage changes between the various points are also given. Lest we be accused of 20/20 hindsight in stock selection, it should be noted that the list was chosen and published in this space two years ago as a typical list of stocks in the institutional growth favorite category . Change July Fall Summer Fall 1975 1975 1976 1975- 1975- High .- -3v0ll-Pr9.sI-Jt!r . . — t;;;;;; -.I. Burroughs Corp llO Low Hiqh 34 -33 .34 76 -3-1-108 1976 Hi 1976 Hi Recent , -14 29 – ——2 '–42 38 102 -..– Coca Cola Co 93 60 -35 95 2 58 86 Disney Walt Prod 53 38 -28 63 19 66 58 Eastman Kodak Co 106 87 -18 ll7 10 34 107 IBM 227 176 -22 264 16 50 257 International Flavor Fragrance 34 22 -35 28 -18 27 24 Johnson & Johnson 100 78 -22 96 – 4 23 83 McDonalds Corp 58 42 -28 65 12 55 61 Polaroid Corp 43 28 -35 42 – 2 50 38 Proctor & Ga mble 99 81 -18 97 – 2 20 83 Sears Roebuck Co 74 57 -23 73 – I 28 72 Xerox 88 46 -48 68 -23 48 63 Avg -29 – 1 40 DJIA 885 818 – 8 996 13 22 It has been remarked somewhere that if the penalty for conventional wisdom in bear mar- kets is disaster, in bull markets it is mediocrity. Such, apparently, has been the case in this instance. Out of the 13 issues, 8 were, at last month's highs, below their highs of the previous July despite the fact that the Dow was some llO points or 13 above that peak. The average percentage change produced by an equal investment in each stock over the period would be something just under -1. A great partclthiSlnferior performance–;'as -the-tableshows, results from the'stocks' action during last fall, a period in which the majority of listed stocks underwent nothing more than a mild consolidation and during which period the Dow declined only 8 from high to low. Not one of the growth issues managed to decline any less than twice as much as the Dow and some dropped off 4 to 5 times as much. Conversely, as the next-to-last column of the table shows, they have outperformed the aver- ages since last fall and done so to an impressive degree. This may argue that the astute investor mIght have done well in selecting them recently as possible trading vehicles. Their inferior cycle-to-cycle performance as measured by their action between last July and recent peaks, however, suggests that the process of unwinding the growth-stock concept IS still underway and may continue well on into the future, not necessarily in the form of the 1973-74 type bloodbath, but in the form of a protracted period of relatively inferior Investment performance. Dow-Jones Industrials (1200 p.m.) 972.29 ANTHONY W. TABELL S & P Composite (1200 p.m.) 98.84 DELAFIELD, HARVEY, TABELL Cumulative Index (3/4/76) 616.06 AWT/jb No statement or expreslon of opinion or any other matter herein contolned IS, or IS to be deemed to be, directly or Indirectly, on offer or the soliCitation of an offer to buy or sell any security referred to or mentioned The molter IS presented merely for the converlence of the subscriber While oNe believe the sources of our Information to be relmble, we In no way represent or guarantee the accuracy thereof nor of the statements mode herein Any action fa be token by the subscriber should be based on hiS own Investlgotlon and Information Janney Montgomery Scoll, Inc, as a corporation, and lIS offICers or employees, may now have, or may loter lake, positions or trades In respect to any SeCUrities mentioned In thiS or any future ISSUe, and such POltlon may be different from any views now or hereafter expressed III thl or any other Issue Janney Montgomery Scott, Inc, which 1 registered With the SEC a on Investment odvlsor, moy give adVice to Its Investment adVISOry and other customers Independently of any tatements mode In thiS or In any other Issue Further .nformatlon on any security mentioned herein IS available on request