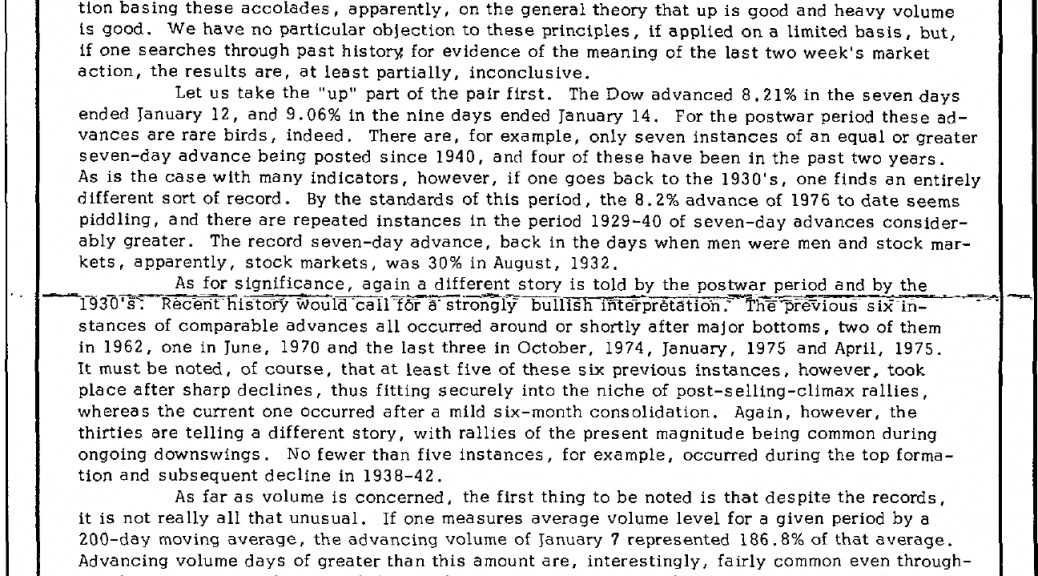 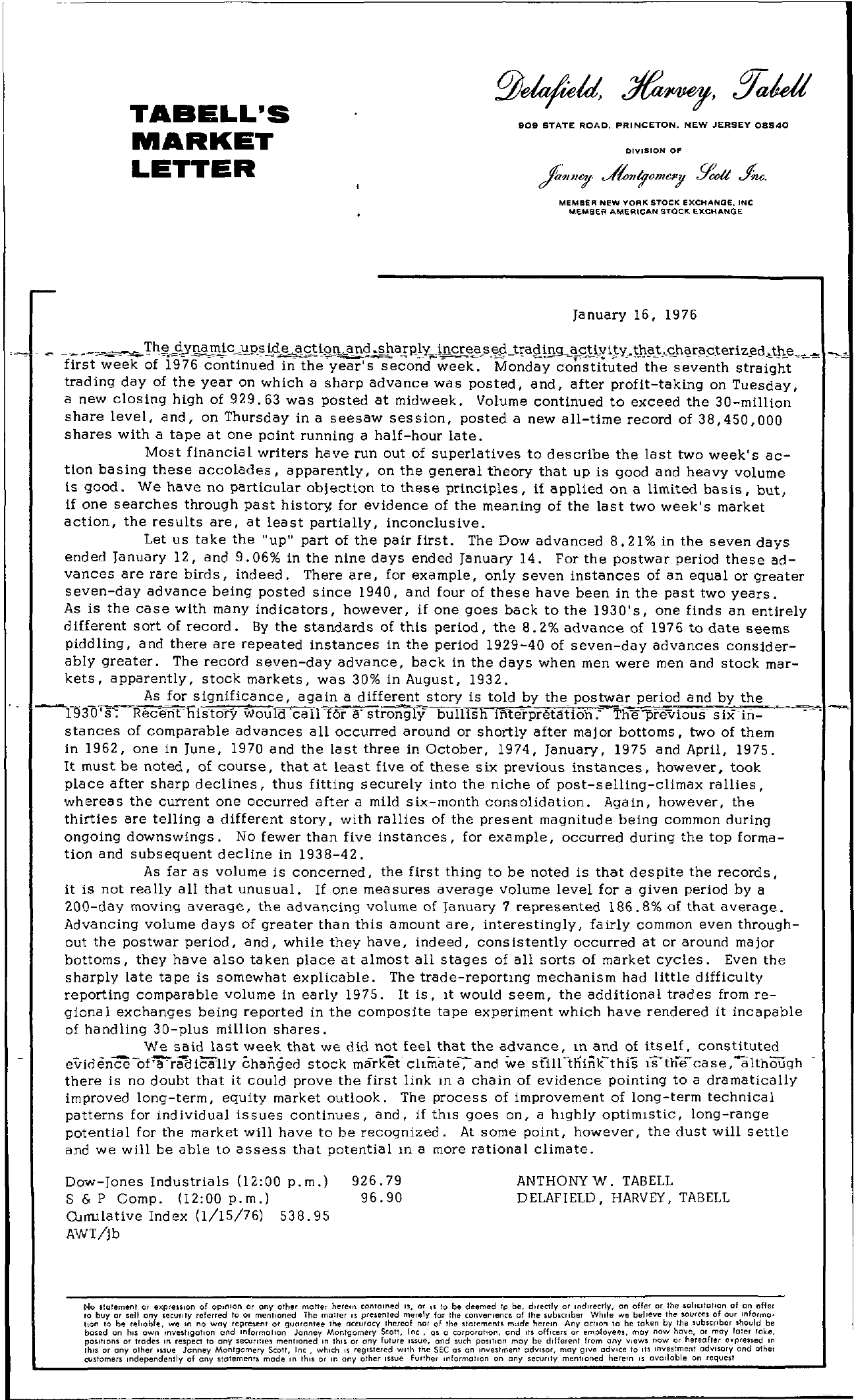 ————————————————————————————————–. TABELL'S MARKET LETTER 909 STATE ROAD, PRINCETON. NEW JERSEY 08540 DIVISION OF MEMBER NEW YORK STOCK EXCHANGE, INC MEMBER A.MERICAN STOCfC eXCHANQE January 16, 1976 ThU!Y!1 micoll.pS ide9Jilm,-a nd .llaq,lyJncrea s eptrad ing activity. thatccharac.terizedthe flrt weekof T976 c;;ntinuedTr;theyea/;seconcrwe;k' Mod;yc;;tittitd-theventh staight– trading day of the year on which a sharp advance was posted, and, after profit-taking on Tuesday, a new closing high of 929.63 was posted at midweek. Volume continued to exceed the 30-million share level, and, on Thursday in a seesaw session, posted a newall-time record of 38,450,000 shares with a tape at one point running a half-hour late. Most financial writers have run out of superlatives to describe the last two week's ac- tion basing these accolades, apparently, on the general theory that up is good and heavy volume is good. We have no particular objection to these principles, if applied on a limited basis, but, if one searches through past history. for evidence of the meaning of the last two week's market action, the results are, at least partially, inconclusive. Let us take the up part of the pair first. The Dow advanced 8.21 in the seven days ended January 12, and 9.06 in the nine days ended January 14. For the postwar period these ad- vances are rare birds, indeed. There are, for example, only seven instances of an equal or greater seven-day advance being posted since 1940, and four of these have been in the past two years. As is the case with many indicators, however, if one goes back to the 1930's, one finds an entirely different sort of record. By the standards of this period, the 8.2 advance of 1976 to date seemS piddling, and there are repeated instances in the period 1929-40 of seven-day advances consider- ably greater. The record seven-day advance, back in the days when men were men and stock mar- kets, apparently, stock markets, was 30 in August, 1932. As for significance, again a different story is told by the postwar period and by the 1930' ReceriChisloty would call-for if stronglY bullish fnterpretatiori The1ir-evious sixin .- – –…, stances of comparable advances all occurred around or shortly after major bottoms, two of them in 1962, one in June, 1970 and the last three in October, 1974, January, 1975 and April, 1975. It must be noted, of course, that at least five of these six previous instances, however, took place after sharp declines, thus fitting securely into the niche of post-selling-climax rallies, wherea s the current one occurred after a mild six-month consolidation. Again, however, the thirties are telling a different story, with rallies of the present magnitude being common during ongoing downswings. No fewer than five instances, for example, occurred during the top forma- tion and subsequent decline in 1938-42. As far as volume is concerned, the first thing to be noted is that despite the records, it is not really all that unusual. If one measures average volume level for a given period by a 200-day moving average, the advancing volume of January 7 represented 186.8 of that average. Advancing volume days of greater than this amount are, interestingly, fairly common even through- out the postwar period, and, while they have, indeed, conSistently occurred at or around major bottoms, they have also taken place at almost all stages of all sorts of market cycles. Even the sharply late tape is somewhat explicable. The trade-reporting mechanism had little difficulty reporting comparable volume in early 1975. It is, It would seem, the additional trades from re- gional exchanges being reported in the composite tape experiment which have rendered it incapable of handling 30-plus million shares. We said last week that we did not feel that the advance, In and of itself, constituted evidence-of'iiraaiGa'lly changed stock market cllmi'lte–;-and we sfilnnink-this isine-case,although there is no doubt that it could prove the first link In a chain of evidence pointing to a dramatically improved long-term, equity market outlook. The process of improvement of long-term technical patterns for individual issues continues, and, if thiS goes on, a highly optimistic, long-range potential for the market will have to be recognized. At some point, however, the dust will settle and we will be able to assess that potential In a more rational climate. Dow-Jones Industrials (1200 p.m.) S & P Camp. (1200 p.m.) QllTUlative Index (1/15/76) 538.95 AWT/jb 926.79 96.90 ANTHONY W. TAB ELL DELAFIELD, HARVEY, TABELL No statement or expression of opinion or any other matter herem contained IS, or IS to be deemed 10 be, directly or indirectly, on oHer or the SOI,Cllo/lon of on offer to buy or sell onr. sectmty referred 10 or mentioned The maller IS presemed merely for Ihe convef'lence of the subSCriber While we believe the sources of our information to be rellob e, we In no way represent or guarantee the accuracy thereof nor of the slolemenl mude herem Any action to be tok.en by the subscflber should be based on hiS own investigatIOn and information Janney Montgomery Scott, Inc, as a corporation, and Its officers or employees, may now have, or may 10ler lake, pOSitions or trades In respect to any Se(IJrllle, mentioned In thiS or ony Future Inue, and such position may be different from any views now or hereafter epressed In thiS or any other 'Sue Janney Montgomery Scolt, Inc, which 15 registered With the SEC as on Investment adVisor, may give adVice to lIS Investment adVisory and other (ustomers mdependently of any stotemenls mode 111 thiS or In any other Issue Furlnel information on any seomty mentioned herein IS available on request