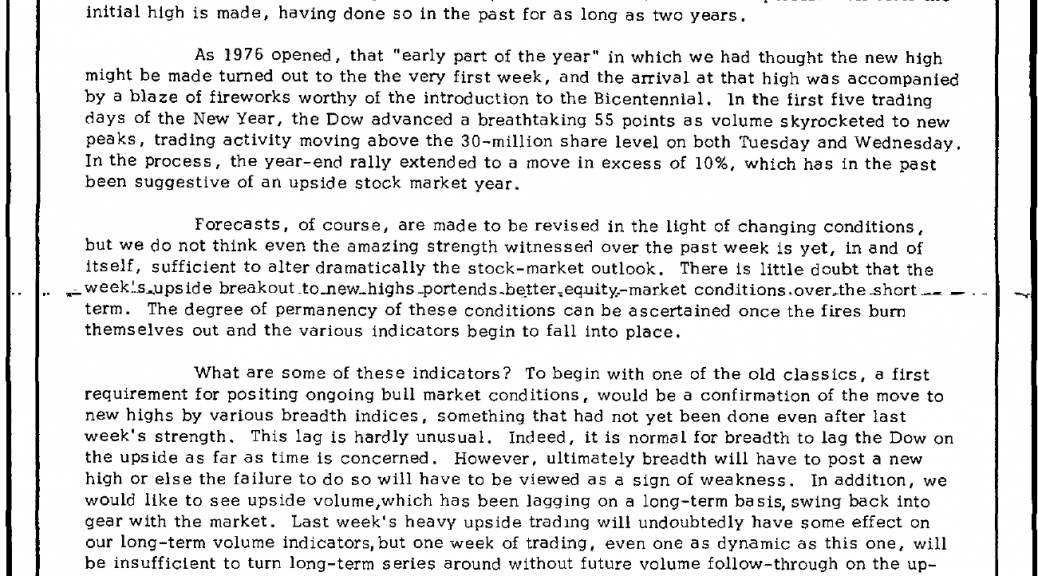 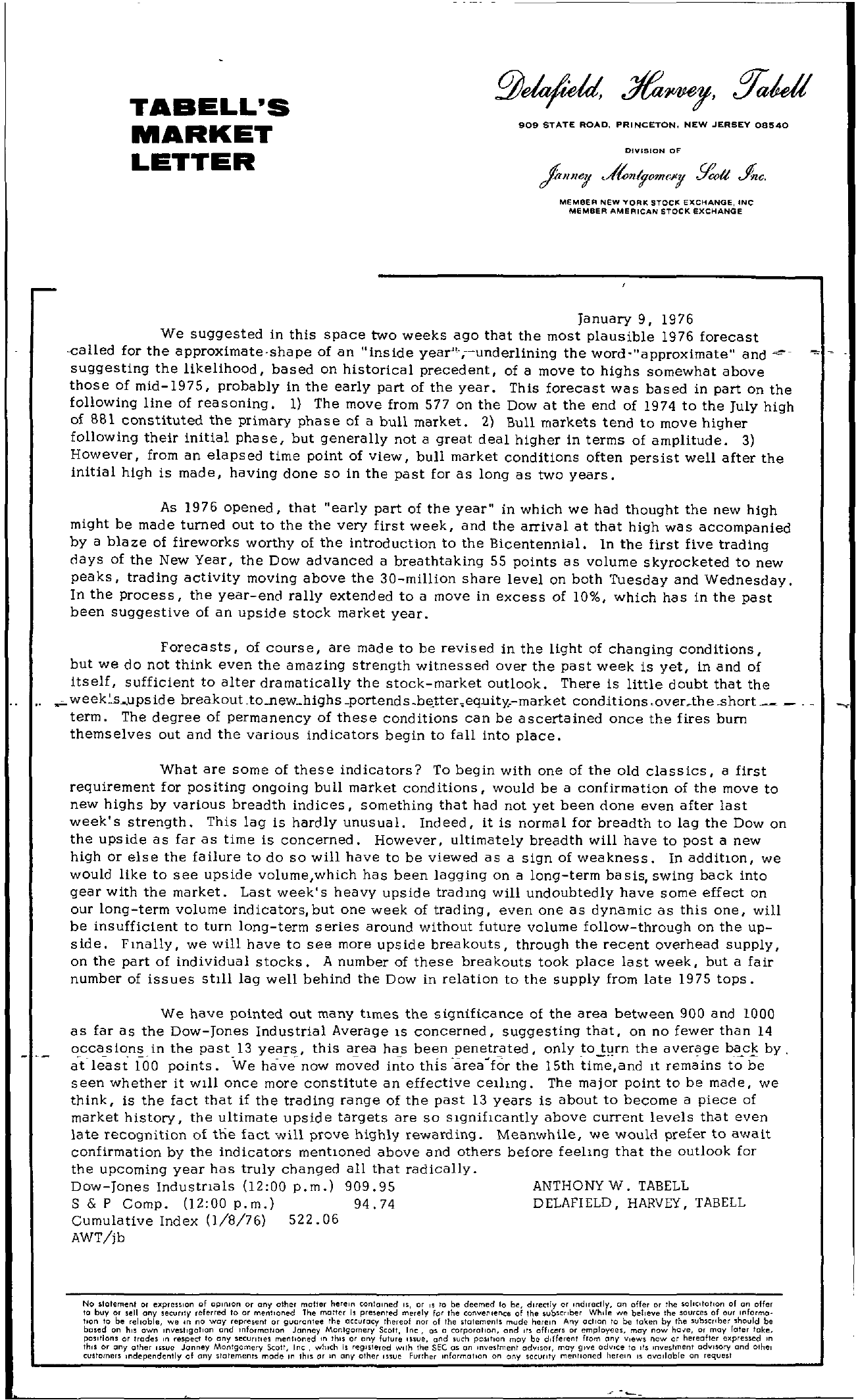 TABELL'S MARKET LETTER 909 STATE ROAD. PRINCETON. NEW JERSEY 08540 DIVISION OF MEMBER NEW YORK STOCK EXCHANGE, INC MEMBER AMERICAN STOCK EXCHANGE January 9, 1976 We suggested in this space two weeks ago that the most plausible 1976 forecast -called for the approximateshape of an inside year',–underlining the word'''approximate'' and – suggesting the likelihood, based on historical precedent, of a move to highs somewhat above those of mid-1975, probably in the early part of the year. This forecast was based in part on the following line of rea soning . 1) The move from 577 on the Dow at the end of 1974 to the July high of BB1 constituted the primary phase of a bull market. 2) Bull markets tend to move higher following their initial phase, but generally not a great deal higher in terms of amplitude. 3) However, from an elapsed time point of view, bull market conditions often persist well after the initial high is made, having done so in the past for as long as two years. As 1976 opened, that early part of the year in which we had thought the new high might be made turned out to the the very first week, and the arrival at that high was accompanied by a blaze of fireworks worthy of the introduction to the Bicentennial. In the first five trading days of the New Year, the Dow advanced a breathtaking 55 points as volume skyrocketed to new pea ks, trading activity moving above the 3D-million share level on both Tuesday and Wednesday. In the process, the year-end rally extended to a move in excess of 10, which has in the past been suggestive of an upside stock market year. Forecasts, of course, are made to be revised in the light of changing conditions, but we do not think even the amazing strength witnesserl over the past week is yet, in and of itself, sufficient to alter dramatically the stock-market outlook. There is little doubt that the .. . weeksupside breakouLtoJlewhighs portends.beJter.eq.uitv.-mar.ket conditions .over-the short . term. The degree of permanency of these conditions can be ascertained once the fires burn themselves out and the various indicators begin to fall into place. -,- What are SOme of these indicators To begin with one of the old classics, a first requirement for positing ongoing bull market conditions, would be a confirmation of the move to new highs by various breadth indices, something that had not yet been done even after last week's strength. This lag is hardly unusual. Indeed, it is normal for breadth to lag the Dow on the upside as far as time is concerned. However, ultimately breadth will have to post a new high or else the failure to do so will have to be viewed as a sign of weakness. In addition, we would like to see upside volume,which has been lagging on a long-term ba sis, swing back into gear with the market. Last week's heavy upside tradmg will undoubtedly have some effect on our long-term volume indicators, but one week of trading, even one as dynamic as this one, will be insufficient to turn long-term series around without future volume follow-through on the upside. Fmally, we will have to see more upside breakouts, through the recent overhead supply, on the part of individual stocks. A number of these breakouts took place last week, but a fair number of issues still lag well behind the Dow in relation to the supply from late 1975 tops. We have pointed out many t,mes the significance of the area between 900 and 1000 as far as the Dow-Jones Industrial Average 's concerned, suggesting that, on no fewer than 14 occasions in the past 13 years, this area has been penetrated, only to turn the average back by. at'least 100 pOints. We ha-';'; now moed in-to this -areafor the 15th ti',and lt remains to be seen whether it w,lI once more constitute an effective ce,hng. The major point to be made, we think, is the fact that if the trading range of the past 13 years is about to become a piece of market history, the ultimate upside targets are so s'gnihcantly above current levels that even late recognition of the fact will prove highly rewarding. Meanwhile, we woulrl prefer to await confirmation by the indicators mentioned above and others before feehng that the outlook for the upcoming year has truly changed all that radically. Dow-Jones Industnals (1200 p.m.) 909.95 ANTHONY W. TABELL S & P Compo (1200 p.m.) 94.74 DELAFIELD, HARVEY, TABELL Cumulative Index (1/8/76) 522.06 AWT/jb No statement or expression of opinion or ony other motter herein cont(llned IS, or IS 10 be deemed to be, directly of indirectly, on offer or the sollc,totlon of on offer to b\Jy or sell any seaHily referred to or menhoned The motter Is presented merely for the conVef'lence of the subscrober WIllie we believe the sovrces of our Informahan to be reliable, we m no way represent or guarantee the accuracy thereof nor of the statements mude herem Any action to be token by the subSCriber should be based on hiS own mvestlgatlon and lnformatlon Janney Montgomery Scott, Inc, as a corporation, and Its officers or employees, may now hoe, or may later toke, positions or trades In respect to any seCUrities men honed In thiS or any future Issue, and such POSition may be different from any Views now or hereafter expressed In thiS or any other ISSlIe Janney Montgomery Scott, Inc, ……h,cn Is registered With the SEC os on lnvestment od.. lsor, may gIVe od….,ce to Its Investment adVISOry and olhel customers Independently of ony statements made In thiS or In any other Issue Further information on any secuflty mentioned herein IS available on request