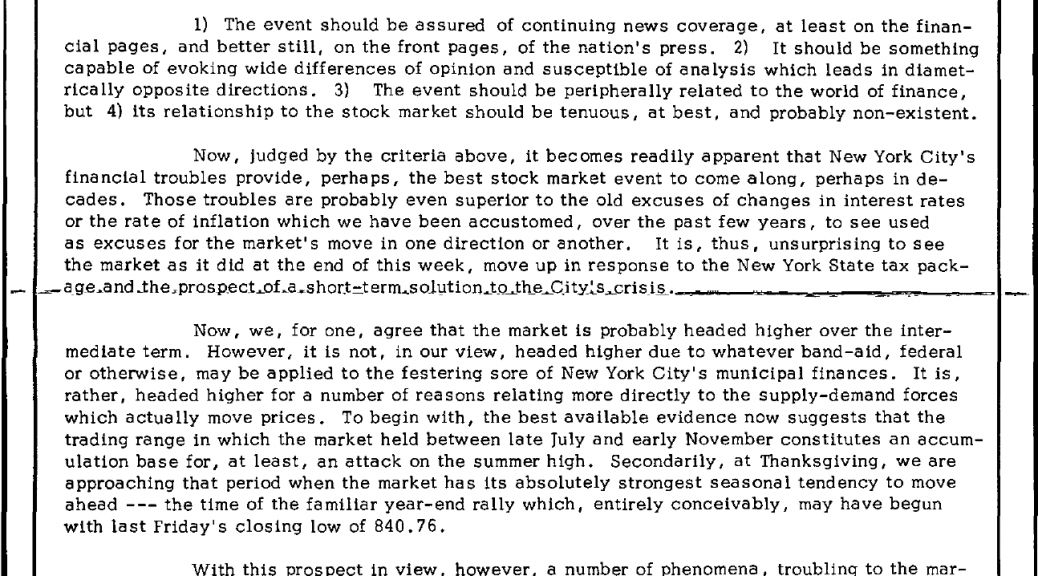 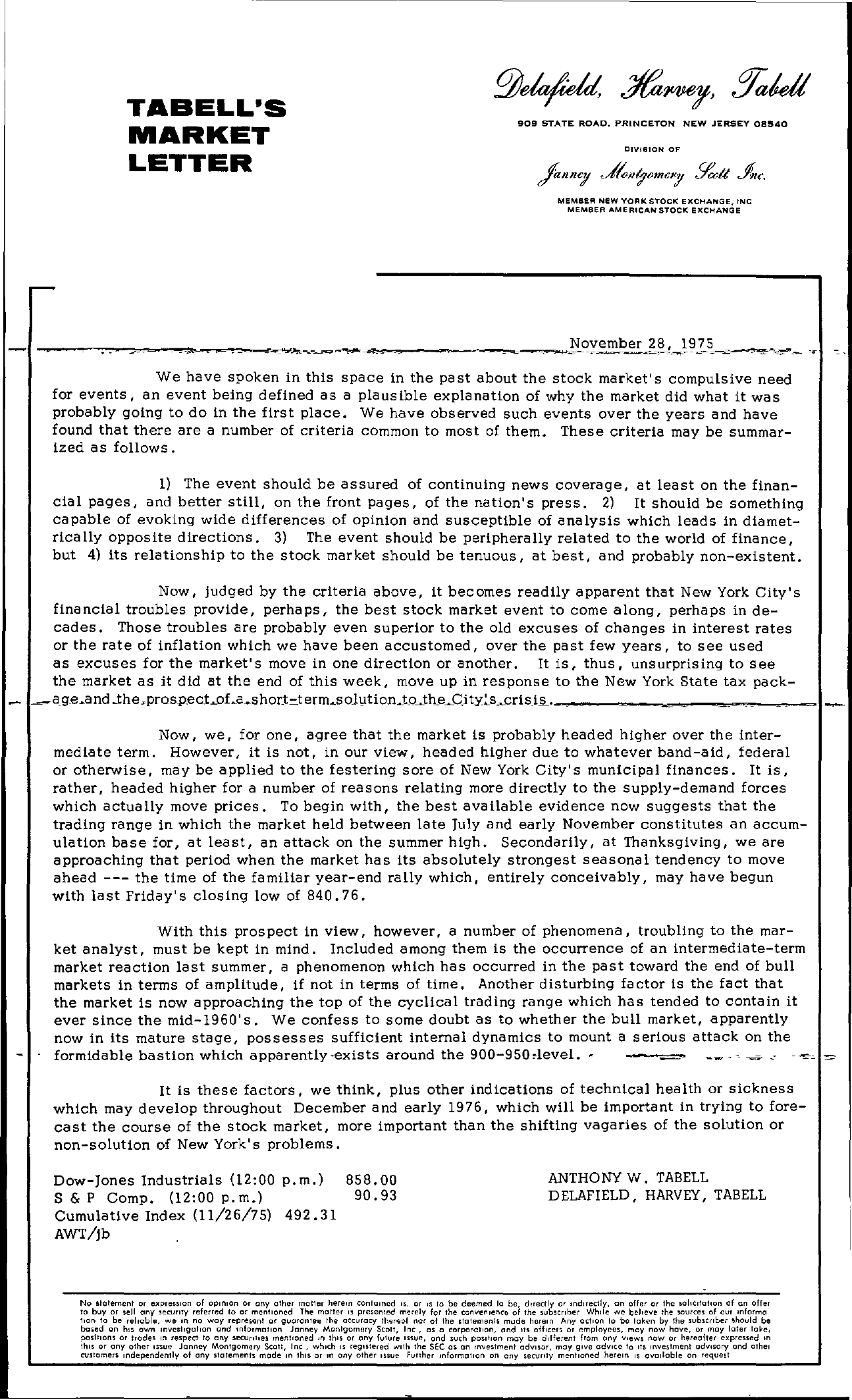 TABELL'S MARKET LETTER – 909 STATE ROAD. PRINCETON NEW JERSEY 08540 DIVISION OF MEMBER NEW YORI( STOel( EXCHANGe, INC MEMBER AMERICAN STOCK eXCHANGE We have spoken in this space in the past about the stock market's compulsive need for events, an event being defined as a plausible explanation of why the market did what it was probably going to do in the first place. We have observed such events over the years and have found that there are a number of criteria common to most of them. These criteria may be summarized as follows. 1) The event should be assured of continuing news coverage, at least on the financial pages, and better still, on the front pages, of the nation's press. 2) It should be something capable of evoking wide differences of opinion and susceptible of analysis which leads in diametrically opposite directions. 3) The event should be peripherally related to the world of finance, but 4) its relationship to the stock market should be tenuous, at best, and probably non-existent. Now, judged by the criteria above, it becomes readily apparent that New York City's financial troubles provide, perhaps, the best stock market event to come along, perhaps in de- cades. Those troubles are probably even superior to the old excuses of changes in interest rates or the rate of inflation which we have been accustomed, over the past few years, to see used as excuses for the market's move in one direction or another. It is, thus, unsurprising to see the market as it did at the end of this week, move up in response to the New York State tax pack- 1ageandthe,prQspect…oLashorJ'-JermsoJ\ltiontjLtheC.ityscrisJ' Now, we, for one, agree that the market is probably headed higher over the intermediate term. However, it is not, in our view, headed higher due to whatever band-aid, federal or otherwise, may be applied to the festering sore of New York City's municipal finances. It is, rather, headed higher for a number of reasons relating more directly to the supply-demand forces which actually move prices. To begin with, the best available evidence now suggests that the trading range in which the market held between late July and early November constitutes an accumulation base for, at least, an attack on the summer high. Secondarily, at Thanksgiving, we are approaching that period when the market has its absolutely strongest seasonal tendency to move ahead — the time of the familiar year-end rally which, entirely conceivably, may have begun with last Friday's closing low of 840.76. With this prospect in view, however, a number of phenomena, troubling to the mar- ket analyst, must be kept in mind. Included among them is the occurrence of an intermediate-term market reaction last summer, a phenomenon which has occurred in the past toward the end of bull markets in terms of amplitude, if not in terms of time. Another disturbing factor is the fact that the market is now approaching the top of the cyclical trading range which has tended to contain it ever since the mid-1960's. We confess to some doubt as to whether the bull market, apparently now in its mature stage, possesses sufficient internal dynamics to mount a serious attack On the formidable bastion which apparentlyexists around the 900-950,level. It is these factors, we think, plus other indications of technical health or sickness which may develop throughout December and early 1976, which will be important in trying to forecast the course of the stock market, more important than the shifting vagaries of the solution or non-solution of New York's problems. Dow-Jones Industrials (1200 p.m.) 858.00 S & P Compo (1200 p.m.) 90.93 Cumulative Index (11/26/75) 492.31 AWT/jb ANTHONY W. TABELL DELAFIELD, HARVEY, TAB ELL No statement or expresSion of opinion or any other moiler herein contolned IS, or IS to be deemed to be, directly or indirectly, on offer or Ihe sol\cllol10n of on offer to buy or sell any security referred to or mentioned The matter IS presented merely for the converlence of Ihe subscriber While 'lYt') believe the Ources of our mforme lion to be relloble, we In no way represent or guarantee the accuracy thereof nor of the statements mude herein Any actIon to be token by the subSCriber should be based on hIS own investIgatIon and informatIon Janney Montgomery Seoll, Inc, as a corporatIon, and Its offIcers or employees, may now hove, or may later tae, posltlons or trades In respect to any Secunhes mentIoned In thIS or any future Issue, and such poslilan may be dIfferent from any VIews now or hereafter expressed In thIS or ony other Issue Janney Montgomery Scali, Inc, whIch IS registered WIth the SEC as an ITlvestment adVIsor, may gIve adVice to ItS Investment adVISOry and olhel customers Independently at any stalements mode In thiS or In ony other Issue Further informatIon on ony secvrlty mentIoned hereIn IS ovmlable on request