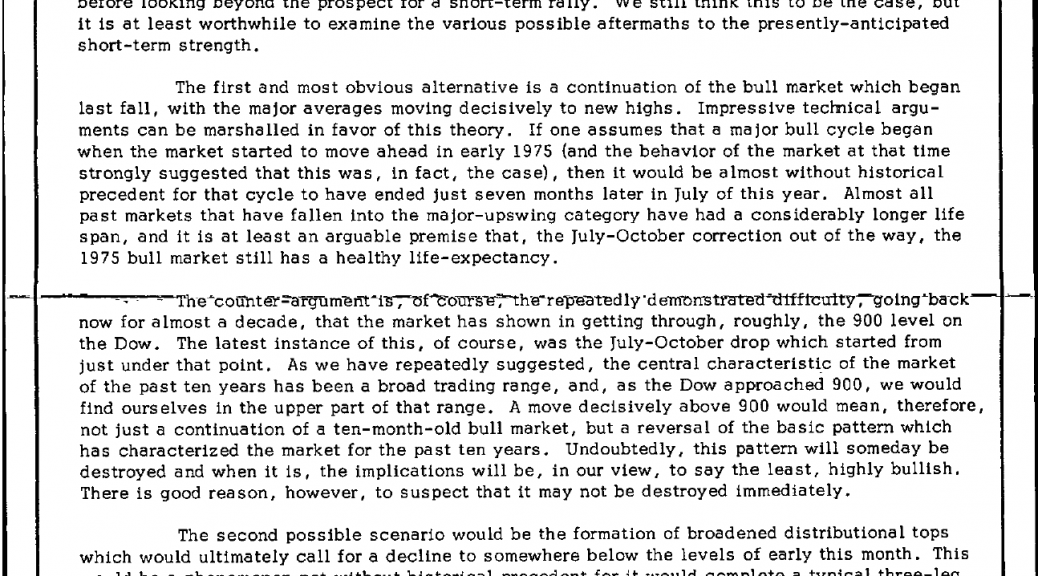 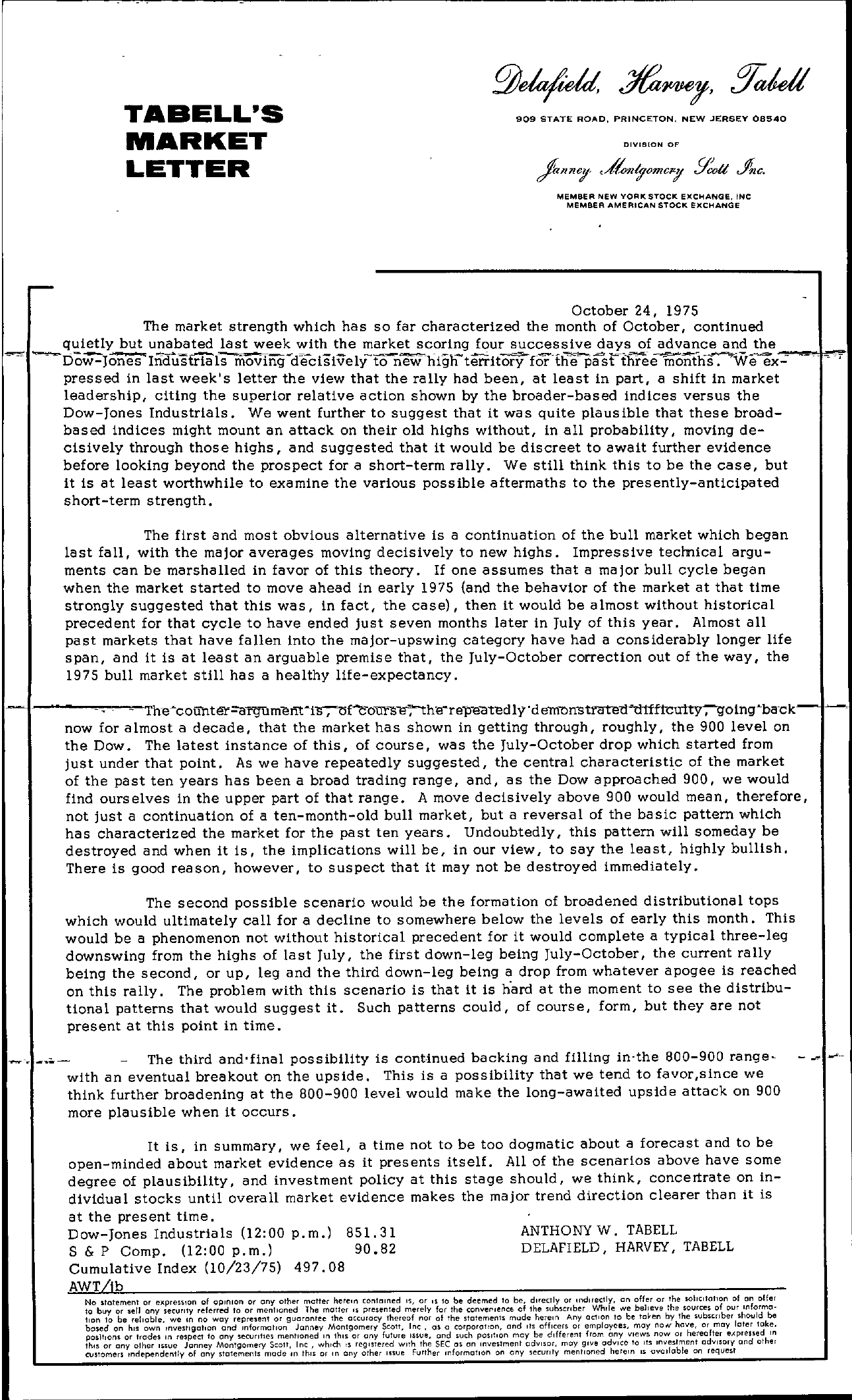 TABELL'S MARKET LETTER 909 STATE ROAD, PRINCETON. NEW JERSEY 08540 DIVISION OF MEMBER NEW YORI( STOCK EXCHANGE, INC MEMBER AMERICAN STOCK eXCHANGE October 24, 1975 The market strength which ha s so far characterized the month of October, continued -Oowqu-JieOt'liy1'beu'St'Iuinldaubsattreldalslamsot vwienegkdwecitihsitvheelym-atrOkne-teswcloiriignhg-tfoerurr istuocrcyefsosritvheepdaasynshroefea1dnovnatnnSceWaenedx–t-h-e-ok-..,….1 pressed in last week's letter the view that the rally had been, at least in part, a shift in market leadership, citing the superior relative action shown by the broader-based indices versus the Dow-Jones Industrials. We went further to suggest that it was quite plausible that these broadbased indices might mount an attack on their old highs without, in all probability, moving decisively through those highs, and suggested that it would be discreet to await further evidence before looking beyond the prospect for a short-term rally. We still think this to be the case, but it is at least worthwhile to examine the various possible aftermaths to the presently-anticipated short-term strength. The first and most obvious alternative is a continuation of the bull market which began last fall, with the major averages moving decisively to new highs. Impressive teclnical arguments can be marshalled in favor of this theory. If one assumes that a major bull cycle began when the market started to move ahead in early 1975 (and the behavior of the market at that time strongly suggested that this was, in fact, the case), then it would be almost without historical precedent for that cycle to have ended just seven months later in July of this year. Almost all past markets that have fallen into the major-upswing category have had a considerably longer life span, and it is at least an arguable premise that, the July-October correction out of the way, the 1975 bull market still has a healthy life-expectancy. 1–4—-..,.,..,.–'–ThecoUhter-argumentrs7of'ColIt-she-rep8atedly -denrcnstratetltltfftcu1ty;-goingL backnow for almost a decade, that the market has shown in getting through, roughly, the 900 level on the Dow. The latest instance of this, of course, was the July-October drop which started from just under that point. As we have repeatedly suggested, the central characteristic of the market of the past ten years has been a broad trading range, and, as the Dow approached 900, we would find ourselves in the upper part of that range. A move decisively above 900 would mean, therefore, not just a continuation of a ten-month-old bull market, but a reversal of the basic pattern which has characterized the market for the past ten years. Undoubtedly, this pattern will someday be destroyed and when it is, the implications will be, in our view, to say the least, highly bullish. There is good reason, however, to suspect that it may not be destroyed immediately. The second possible scenario would be the formation of broadened distributional tops which would ultimately call for a decline to somewhere below the levels of early this month. This would be a phenomenon not without historical precedent for it would complete a typical three-leg downswing from the highs of last July, the first down-leg being July-October, the current rally being the second, or up, leg and the third down-leg being a drop from whatever apogee is reached on this rally. The problem with this scenario is that it is hard at the moment to see the distributional patterns that would suggest it. Such patterns could, of course, form, but they are not present at this pOint in time. . … – – The third and'final possibility is cont-inued backing and filling in-the 800-900 range with an eventual breakout on the upside. This is a possibility that we tend to favor,since we think further broadening at the 800-900 level would make the long-awaited upside attack on 900 more plausible when it occurs. -.— It is, in summary, we feel, a time not to be too dogmatic about a forecast and to be open-minded about market evidence as it presents itself. All of the scenarios above have some degree of plausibility, and investment policy at this stage should, we think, concertrate on individual stocks until overall market evidence makes the major trend direction clearer than it is at the present time. Dow-Jones Industrials (1200 p.m.) 851. 31 S & P Compo (1200 p.m.) 90.82 ANTHONY W. TABELL DELAFIELD, HARVEY, TABELL Cumulative Index (10/23/75) 497.08 AWT/lb No ,Iclement or expreSSIOn of opinion or ony other matter here'n contamed IS, or IS 10 be deemed to be, directly or ondnec1ly, on offer or Ihe sollcllallon of on offer 10 buy tlon to or sell any security be relloble, we In referred no woy 10 or mentioned The moiler .s presented merely represent or guorontee the occurocy thereof nor for of the the conveenc of the subSCriber slotements mude herelll Any acWTiohnile10wbeebteolieevne the sources of our Informoby the subSCriber should be bosed on hiS own tnvestlgohon and Informotlon Janney Montgomery Scott, Inc, as a corporotlon, and lIs officers or employees, may no, hove, or may loler lake, posltlons or Irodes In respecT to ony seCUrities mentioned In thiS or any future Issue, and suth pOSition may be different from any views now or hereafter e.prened In thiS or ony other Issue Jonney Montgomery Scott, Inc, which 's res,stered With the SEC as on Investment adVisor, may give odvltc 10 Its Investment odvlsory and other customers II'ldependently of any slotements mode II'l thiS or In any other Issue Further mformotlon on any security mentioned herein IS ovotloble on request