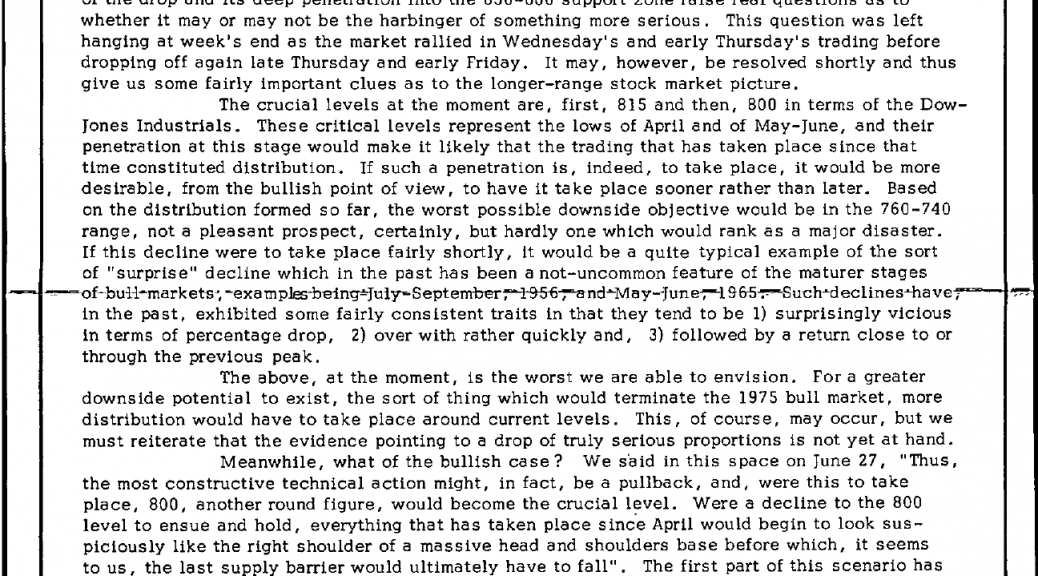 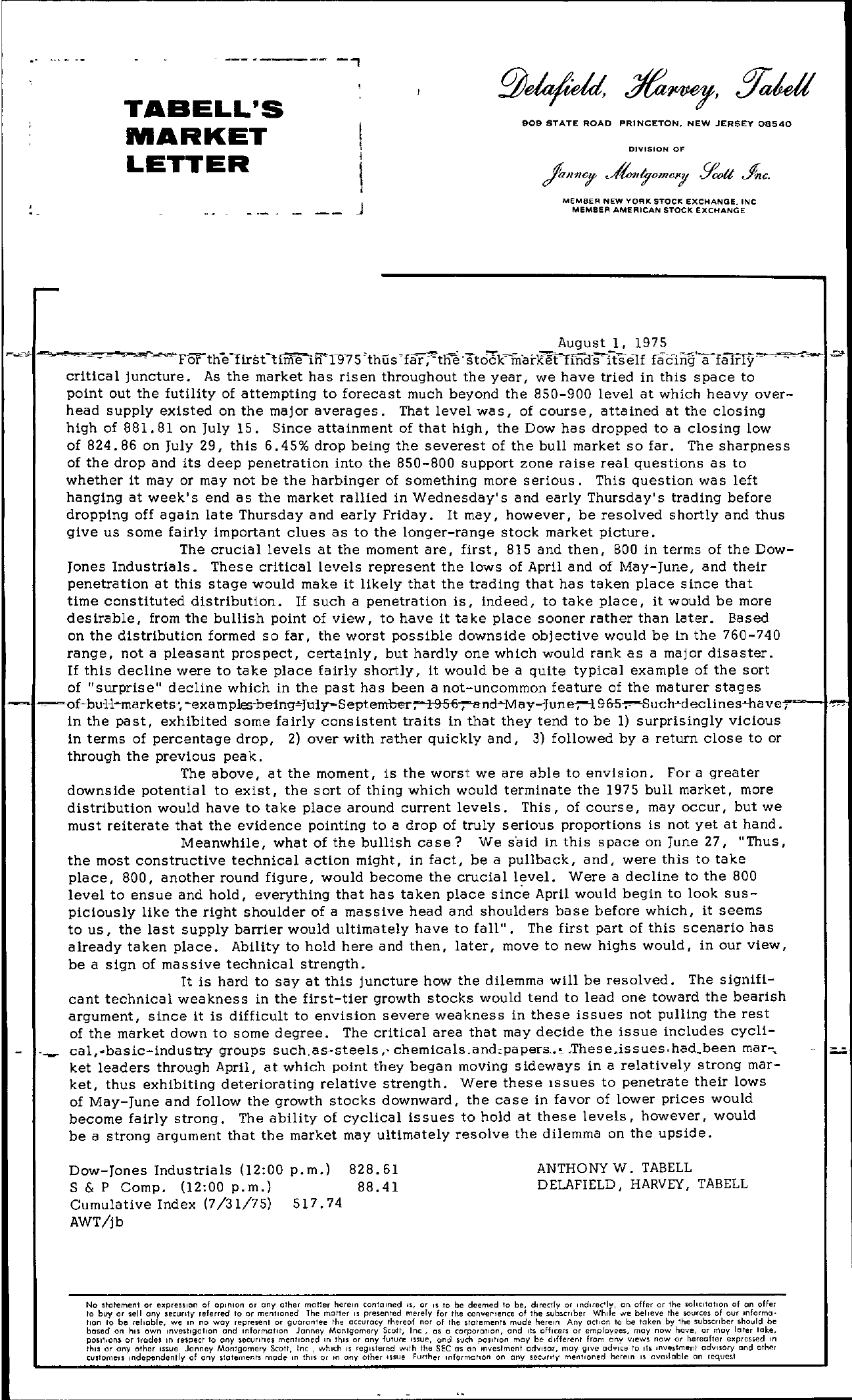 TABELL'S MARKET LETTER J 909 STATE ROAD PRINCETON, NEW JERSEY 08540 DIVISION OF MEMBER NEW YORK STOCK EXCHANGE, INC MEMBER AMERICAN STOCK EXCHANGE – August I, 1975 – – , — —Forthe,IirsCtlme iirT975-thijs-far;tne'stciC'kjilarffifi'ncrsitself faCin-g'Tfarrry'- '– critical juncture. As the market has risen throughout the year, we have tried in this space to point out the futility of attempting to forecast much beyond the 850-900 level at which heavy over- head supply existed on the major averages. That level was, of course, attained at the closing high of 88L 81 on July 15. Since attainment of that high, the Dow has dropped to a closing low of 824.86 on July 29, this 6.45 drop being the severest of the bull market so far. The sharpness of the drop and its deep penetration into the 850-800 support zone raise real questions as to whether it mayor may not be the harbinger of something more serious. This question was left hanging at week's end as the market rallied in Wednesday's and early Thursday's trading before dropping off again late Thursday and early Friday. It may, however, be resolved shortly and thus give us some fairly important clues as to the longer-range stock market picture. The crucial levels at the moment are, first, 815 and then, 800 in terms of the Dow- Jones Industrials. These critical levels represent the lows of April and of May-June, and their penetration at this stage would make it likely that the trading that has taken place since that time constituted distribution. If such a penetration is, indeed, to take place, it would be more desirable, from the bullish point of view, to have it take place sooner rather than later. Based on the distribution formed so far, the worst possible downside objective would be in the 760-740 range, not a pleasant prospect, certainly, but hardly one which would rank as a major disaster. If this decline were to take place fairly shortly, it would be a quite typical example of the sort of surprise decline which in the past has been a not-uncommon feature of the maturer stages – -'–ofbuH-markets', -exa mples-being'JulYSeptember;-T9-5-67BndMay–June-;–196'5Suchdeclineshave i – in the past, exhibited some fairly consistent traits in that they tend to be 1) surprisingly vicious in terms of percentage drop, 2) over with rather quickly and, 3) followed by a return close to or through the previous pea k. The above, at the moment, is the worst we are able to envision. For a greater downside potential to exist, the sort of thing which would terminate the 1975 bull market, more distribution would have to take place around current levels. This, of course, may occur, but we must reiterate that the evidence pOinting to a drop of truly serious proportions is not yet at hand. Meanwhile, what of the bullish case We s'aid in this space on June 27, Thus, the most constructive technical action might, in fact, be a pullback, and, were this to take place, 800, another round figure, would become the crucial leveL Were a decline to the 800 level to ensue and hold, everything that has taken place sinc'e April would begin to look sus- piciously like the right shoulder of a massive head and shoulders base before which, it seems to us, the last supply barrier would ultimately have to fall. The first part of this scenario has already taken place. Ability to hold here and then, later, move to new highs would, in our view, be a sign of massive technical strength. It is hard to say at this juncture how the dilemma will be resolved. The signifi- cant technical weakness in the first-tier growth stocks would tend to lead one toward the bearish argument, since it is difficult to envision severe weakness in these issues not pulling the rest of the market down to some degree. The critical area that may decide the issue includes cycli- cal,-basic-industry groups such,as-steels ,- chemicals .andpaperR., These.issues.had.been mar-, ket leaders through April, at which point they began moving sideways in a relatively strong mar- ket, thus exhibiting deteriorating relative strength. Were these issues to penetrate their lows of May-June and follow the growth stocks downward, the case in favor of lower prices would become fairly strong. The ability of cyclical issues to hold at these levels, however, would be a strong argument that the market may ultimately resolve the dilemma on the upside. Dow-Jones Industrials (1200 p.m.) 828.61 S & P Compo (1200 p.m.) 88.41 Cumulative Index (7/31/75) 517.74 AWT/jb ANTHONY W. TABELL DELAFIELD, HARVEY, TABELL NQ stotement or epresslon of opinIOn or ony other motter herem contclined I, or IS TO be deemed to be, directly or Indlfec'ly, on offer or the soliCitation of on offer to buy or sell any security referred 10 or mentioned The motter IS presented merely for the COnVerH!!nC 01 the subcrlber While we believe the sources of our mformatlon to be reliable, we m no way represent or guarantee the accuracy thereof nor of the stotement mude herein Any actmn to be token by the subSCriber should be based on hiS own investigation and InformotlOn Janney Montgomery Scott, Inc, as a corporation, ond Its officers or employees, may now have, or may later toke, POSitiOn or trades In respect to any securities mentioned In thiS or any future Issue, ond such p051tlon may be different from any views now or hereafter epressed In thiS or ony other Issue Janney Montgomery Scott, Inc, which IS registered With the SEC as on Investment adVisor, may give adVice to Its mvestment adVisory and other customers Independently of any statements mode In thiS or m any other Issue Further information on any security mentioned herem I available on request