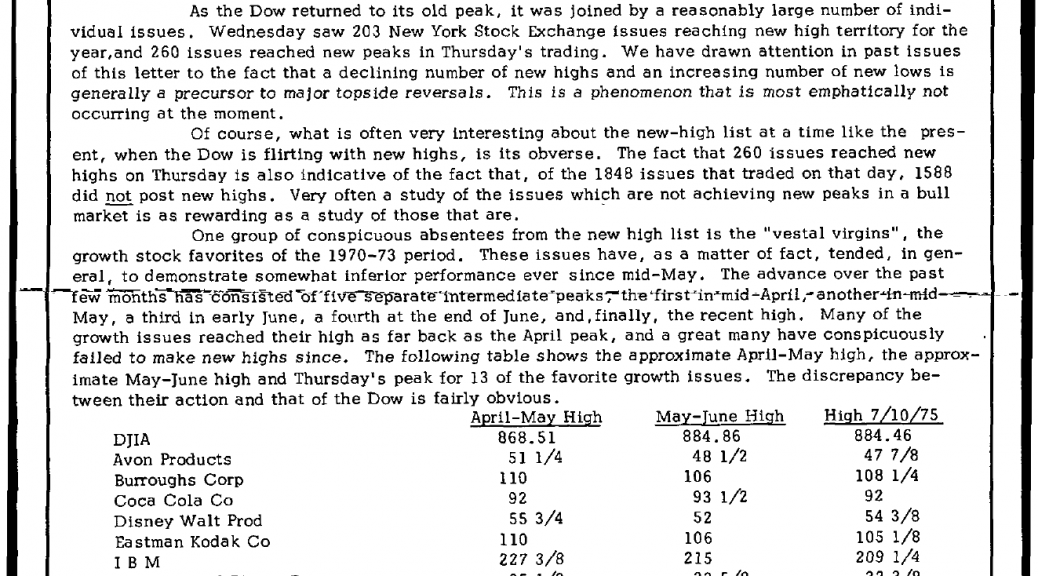 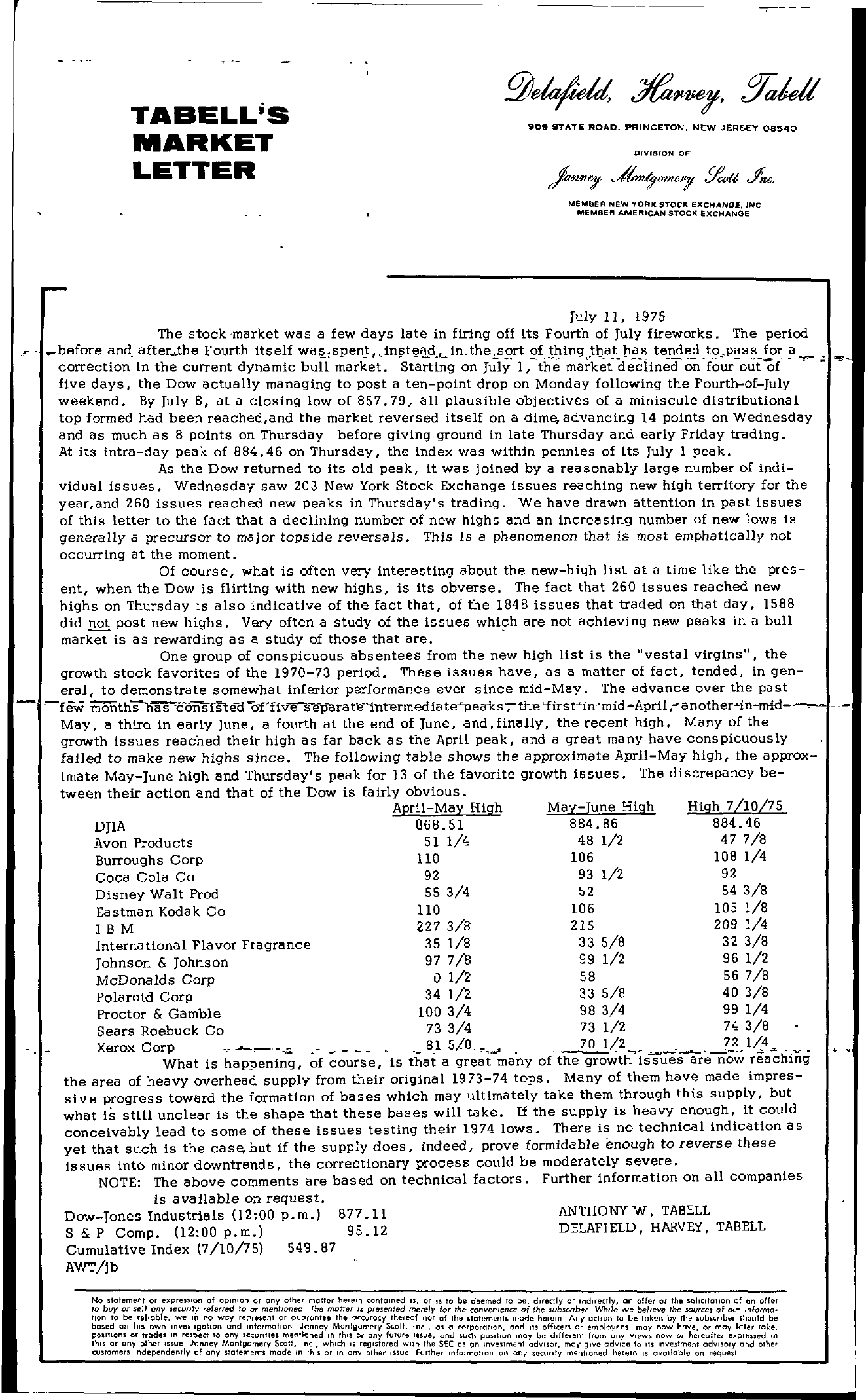 TABELLiS MARKET LETTER 909 STATE ROAD, PRINCETON, NEW JERSEY 08540 DIVISiON OF MEMBER NEW VOAK STOCK EXCHANGE. 'Ne MEMBER AMERICAN STOCK EXCHANGe July 11, 1975 The stock 'market was a few days late in firing off its Fourth of July fireworks. The period before and,.afterthe Fourth itselCwa,spe!1t,.intElgA,ln,the,sort — – -o- f –t..h.- ing tt l-a-t- h-as tended — -t-o- ,p-a s-s- – for- -a—— – '5 correction in the current dynamic bull market. Starting on July 1, the market declined on four out of ' – five days, the Dow actually managing to post a tenpolnt drop on Monday following the Fourth-of-July weekend. By July 8, at a closing low of 8S7. 79, all plausible objectives of a miniscule distributional top formed had been reached,and the market reversed itself on a dime, advancing 14 points on Wednesday and as much as 8 pOints on Thursday before giving ground in late Thursday and early Friday trading. At Its Intra-day peak of 884.46 on Thursday, the index was within pennies of its July I peak. As the Dow returned to Its old peak, it was joined by a reasonably large number of indi- vidual Issues. Wednesday saw 203 New York Stock Exchange issues reaching new high territory for the year,and 260 issues reached new peaks In Thursday's trading. We have drawn attention in past Issues of this letter to the fact that a declining number of new highs and an increasing number of new lows is generally a precursor to major topside reversals. This is a phenomenon that is most emphatically not occurring at the moment. Of course, what is often very Interesting about the new-high list at a time like the pres- ent, when the Dow is flirting with new highs, is Its obverse. The fact that 260 Issues reached new highs on Thursday is also indicative of the fact that, of the 1848 issues that traded on that day, 1588 did not post new highs. Very often a study of the issues which are not achieving new peaks in a bull market is as rewarding as a study of those that are. One group of conspicuous absentees from the new high list Is the vestal virgins, the growth stock favorites of the 1970-73 period. These Issues have, as a matter of fact, tended, in gen- eral, to demonstrate somewhat Inferior performance ever since mid-May. The advance over the past – rew i'iiOnthsna s 'c-OriSfSted -(Wflvs eporate-'1nt'ermedlatepea'ks7'the 'fiTstinmid April,- anotherln-mid- – , May, a third in early June, a fourth at the end of June, and.finally, the recent high. Many of the growth Issues reached their high as far back as the April peak, and a great many have conspicuously failed to make new highs since. The following table shows the approximate April-May high, the approx- Imate May-June high and Thursday's peak for 13 of the favorite growth Issues. The discrepancy be- tween their action and that of the Dow is fairly obvious. April-May High May-June High High 7/10/75 DJIA 868.51 884.86 884.46 Avon Products 51 1/4 481/2 477/8 Burroughs Corp 110 106 108 1/4 Coca Cola Co 92 93 1/2 92 Disney Walt Prod 55 3/4 52 54 3/8 Eastman Kodak Co 110 106 lOS 1/8 IBM 227 3/8 215 209 1/4 International Flavor Fragrance 35 1/8 33 5/8 32 3/8 Johnson &Johnson 97 7/8 99 1/2 96 1/2 McDonalds Corp U 1/2 58 567/8 Polaroid Corp 34 1/2 33 5/8 40 3/8 Proctor & Gamble 100 3/4 98 3/4 99 1/4 Sears Roebuck Co 73 3/4 –. Xerox Corp ,.-.–. . . 815/8,– , 73 1/2 74 3/8 70 lZ2 -,,-1..21/ .. What is happening, of course, Is that a great many of the growth issues are now reaching the area of heavy overhead supply from their original 1973-74 tops. Many of them have made impres- sive progress toward the formation of bases which may ultimately take them through this supply, but what is still unclear is the shape that these bases will take. If the supply is heavy enough, It could conceivably lead to some of these issues testing their 1974 lows. There Is no technical Indication as yet that such is the case, but if the supply does, indeed, prove formidable enough to reverse these Issues Into minor downtrends, the correctlonary process could be moderately severe. NOTE The above comments are based on technical factors. Further information on all companies Is available on request. Dow-Jones Industrials (1200 p.m.) 877.11 S & P Compo (1200 p.m.) 95.12 ANTHONY W. TABELL DELAFIELD, HARVEY, TABELL Cumulative Index (7/10/75) 549.87 AWT/jb No statement or expression of opinion or any other moIler hereIn contaIned IS, or I to be deemed to be, dIrectly or IndHectly, an offer or the sol,c,tat,on of on offer to buy OT ;!e!l any ,comfy referred to or mentIoned The motter I, presented merely for the conver-Ience af Ihe subsc(lber Whlle ….e bel,eve the ICurces of our mformolion to be reliable, we In no way repreent or guarantee the accurocy thereof nor of the statements mude hereIn Any oellon to be taken by the subSCriber should be based on hIS own InveshgolLon and Information Janney Montgomery Scolt, Inc, os a CorporatIon, and Its off.cers or employees, may now have, or may later toke, poslt.ons or trades In respect to any !oecunlles mentioned 10 thIS or any future luue, and such POSitIon may be dIfferent from any VIews now or hereafter expu!ssed ,n dllS or any other ,nue Janney Montgomery Scolt, Inc, whIch IS regIstered wllh the SEC as on Investment adVIsor, moy gIve advlc-e to lIs Investment adVIsory and other C'Ustomers mdependently of any statements mode In thIS or In any other Issue Further InformatIon on any sccmty mentIoned herem IS available on request