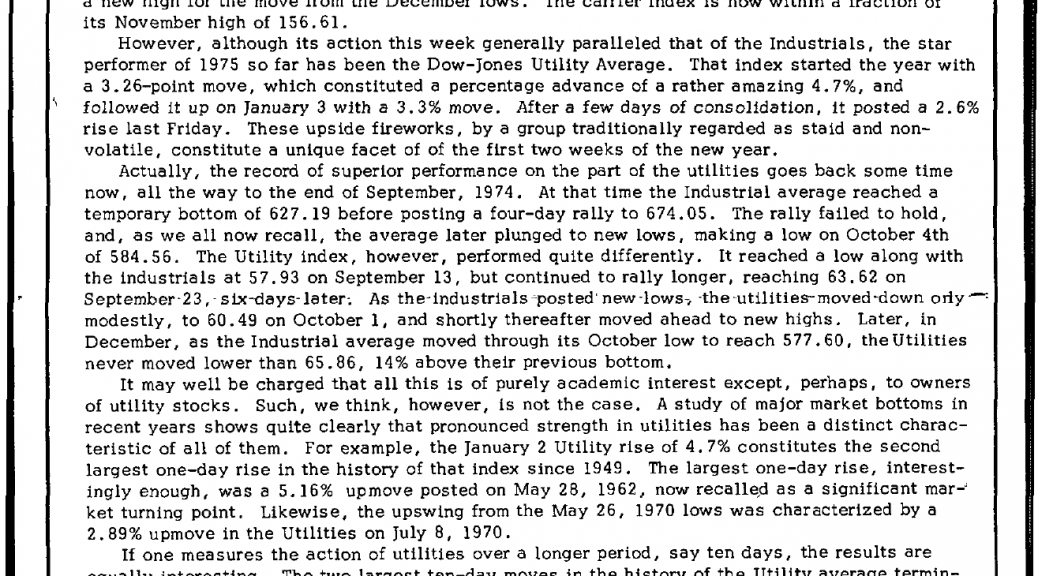 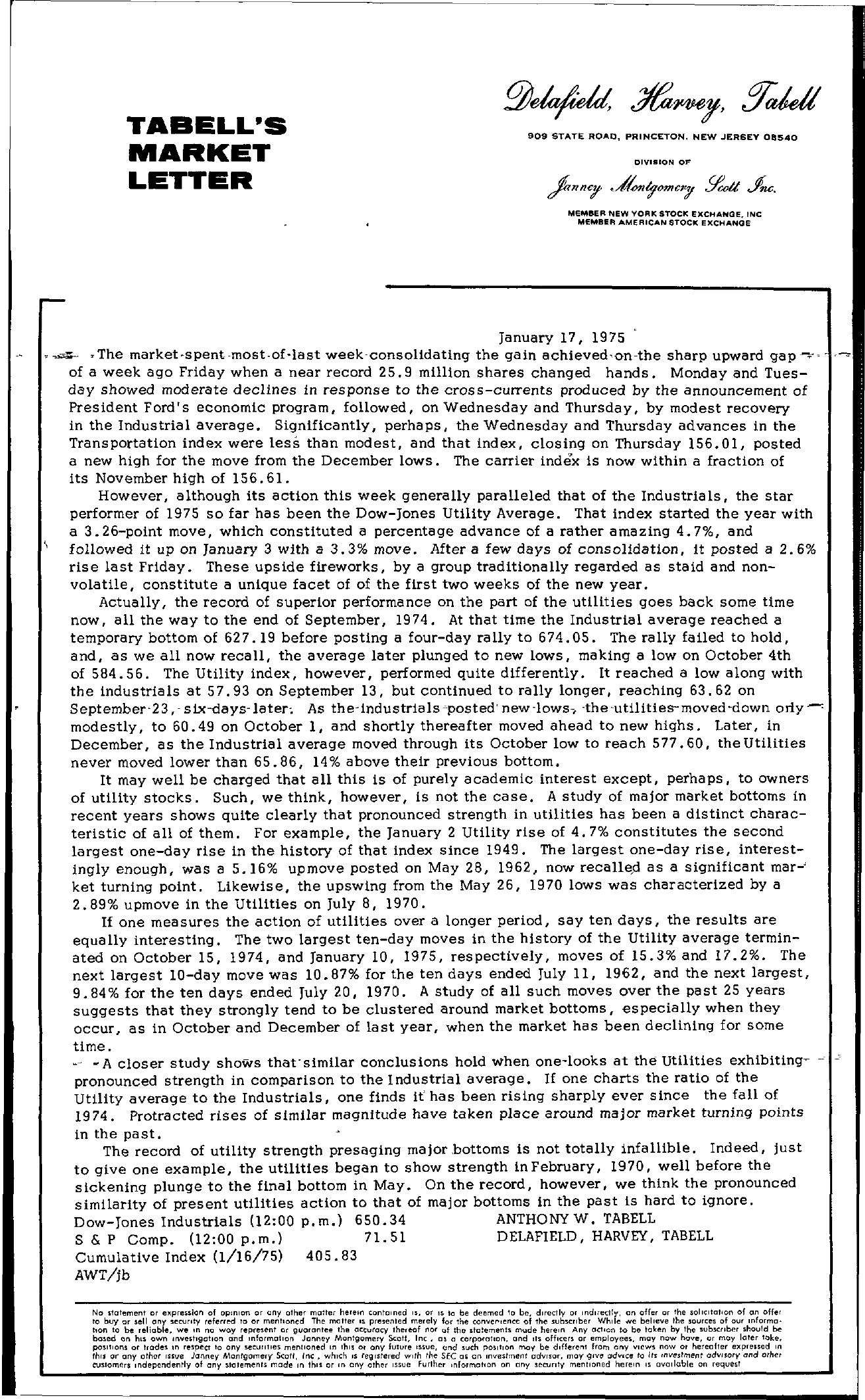 TABELL'S MARKET LETTER 909 STATE ROAD, PRINCETON. NEW JERSEY 08540 DIVISION OF MEMSER NEW VOAI( STOCI( EXCHANGE, tNC MEMBEA AMERICAN STOCK EXCHANGE January 17, 1975 '.,; .The marketspentmost.oflast week'consolidating the gain achieved'on-the sharp upward gap' – …. of a week ago Friday when a near record 25.9 million shares changed hands. Monday and Tues- day showed moderate declines in response to the cross-currents produced by the announcement of President Ford's economic program, followed, on Wednesday and Thursday, by modest recovery in the Industrial average. Significantly, perhaps, the Wednesday and Thursday advances in the Transportation index were less than modest, and that index, closing on Thursday 156.01, posted a new high for the move from the December lows. The carrier index is now within a fraction of its November high of 156.61. However, although its action this week generally paralleled that of the Industrials, the star performer of 1975 so far has been the Dow-Jones Utility Average. That index started the year with a 3. 26-point move, which constituted a percentage advance of a rather amazing 4.7, and followed it up on January 3 with a 3.3 move. After a few days of consolidation, it posted a 2.6 rise last Friday. These upside fireworks, by a group traditionally regarded as staid and non- volatile, constitute a unique facet of of the first two weeks of the new year. Actually, the record of superior performance on the part of the utilities goes back some time now, all the way to the end of September, 1974. At that time the Industrial average reached a temporary bottom of 627.19 before posting a four-day rally to 674.05. The rally failed to hold, and, as we all now recall, the average later plunged to new lows, making a low on October 4th of 584.56. The Utility index, however, performed quite differently. It reached a low along with the industrials at 57.93 on September 13, but continued to rally longer, reaching 63.62 on September-23,' six-days-later, As the-industrials posted- newlows, the -utilities-moved-down orly'-' modestly, to 60.49 on October 1, and shortly thereafter moved ahead to new highs. Later, in December, as the Industrial average moved through its October low to reach 577.60, the Utilities never moved lower than 65.86, 14 above their previous bottom. It may well be charged that all this is of purely academic interest except, perhaps, to owners of utility stocks. Such, we think, however, is not the case. A study of major market bottoms in recent years shows quite clearly that pronounced strength in utilities has been a distinct charac- teristic of all of them. For example, the January 2 Utility rise of 4.7 constitutes the second largest one-day rise in the history of that index since 1949. The largest one-day rise, interest- ingly enough, was a 5.16 upmove posted on May 28, 1962, now recalle.d as a significant mar-' ket turning point. Likewise, the upswing from the May 26, 1970 lows was characterized by a 2.89 upmove in the Utilities on July 8, 1970. If one measures the action of utilities over a longer period, say ten days, the results are equally interesting. The two largest ten-day moves in the history of the Utility average termin- ated on October 15, 1974, and January 10, 1975, respectively, moves of 15.3 and 17.2. The next largest 10-day move was 10.87 for the ten days ended July 11, 1962, and the next largest, 9.84 for the ten days ended July 20, 1970. A study of all such moves over the past 25 years suggests that they strongly tend to be clustered around market bottoms, especially when they occur, as in October and December of last year, when the market has been declining for some time. — A closer study shows that'similar conclusions hold when one-looks at the Utilities exhibiting- – – pronounced strength in comparison to the I ndustrial average. If one charts the ratio of the Utility average to the Industrials, one finds if has been rising sharply ever since the fall of 1974. Protracted rises of Similar magnitude have taken place around major market turning points in the past. The record of utility strength presaging major bottoms is not totally infallible. Indeed, just to give one example, the utilities began to show strength in February, 1970, well before the sickening plunge to the final bottom in May. On the record, however, we think the pronounced similarity of present utilities action to that of major bottoms in the past is hard to ignore. Dow-Jones Industrials (1200 p.m.) 650.34 ANTHONYW. TABELL S & P Compo (1200 p.m.) 71.51 DELAFIELD, HARVEY, TABELL Cumulative Index (1/16/75) 405.83 AWT/jb No stalement or expreulon of opinIOn or any other motler herein contolned IS, or IS to be deemed 10 be, directly or indirectly, on offer or the SOII(;llollon of on offer to buy or sell Clny security referr to or mentioned The moiler IS presented merely for the conver-tenCt; of the subscriber While we believe the sources of our informa- tion to be reliable. we In no way represent ar guarantee the accuracy thereof nor af the &lalemenls m\lde herein Any act.on 10 be loken by the subscriber should be based on hiS awn IIlveshgollon and IIlformatlan Jonney Montgomery Scott. Inc . a 0 corporolcon, and Its offICers or employees, may now hove, or moy later toke, positions or trades In respect to any securities mentioned In thiS or any fulure Issue, (1nd such position may be different from ony views now Or hereafter expreued III thrs or ony other rswe Janney MOntgomery Scott, Inc. whICh rs regrstered WIth the SEC oS on rnvestment advrsor, may give adVIce to 115 ,vestment adVisory and other customers Independently of any statements mode III thiS or In any other Issue Further ,nformotlon on ony security mentioned herein IS avadable on request