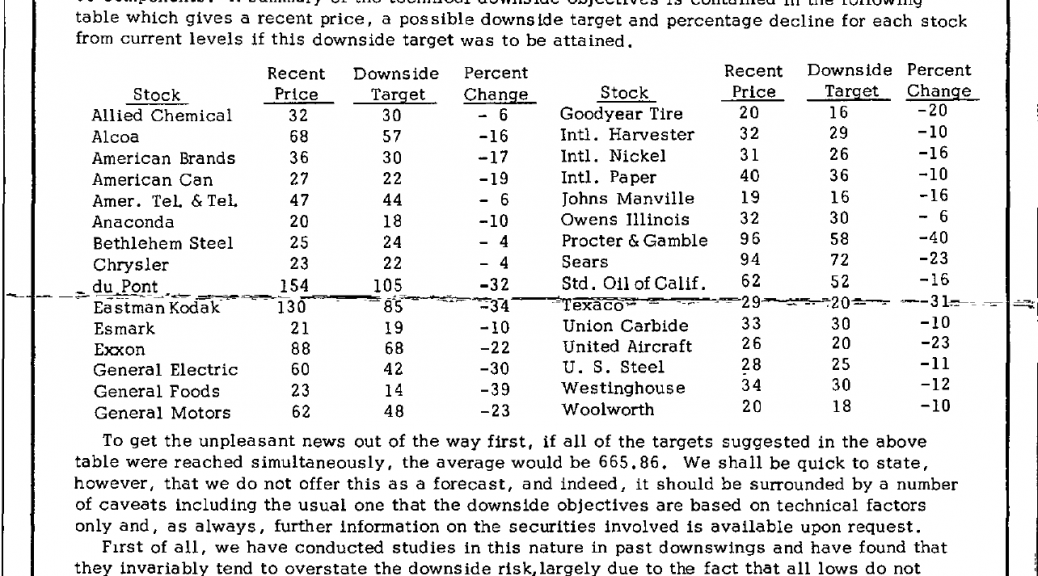 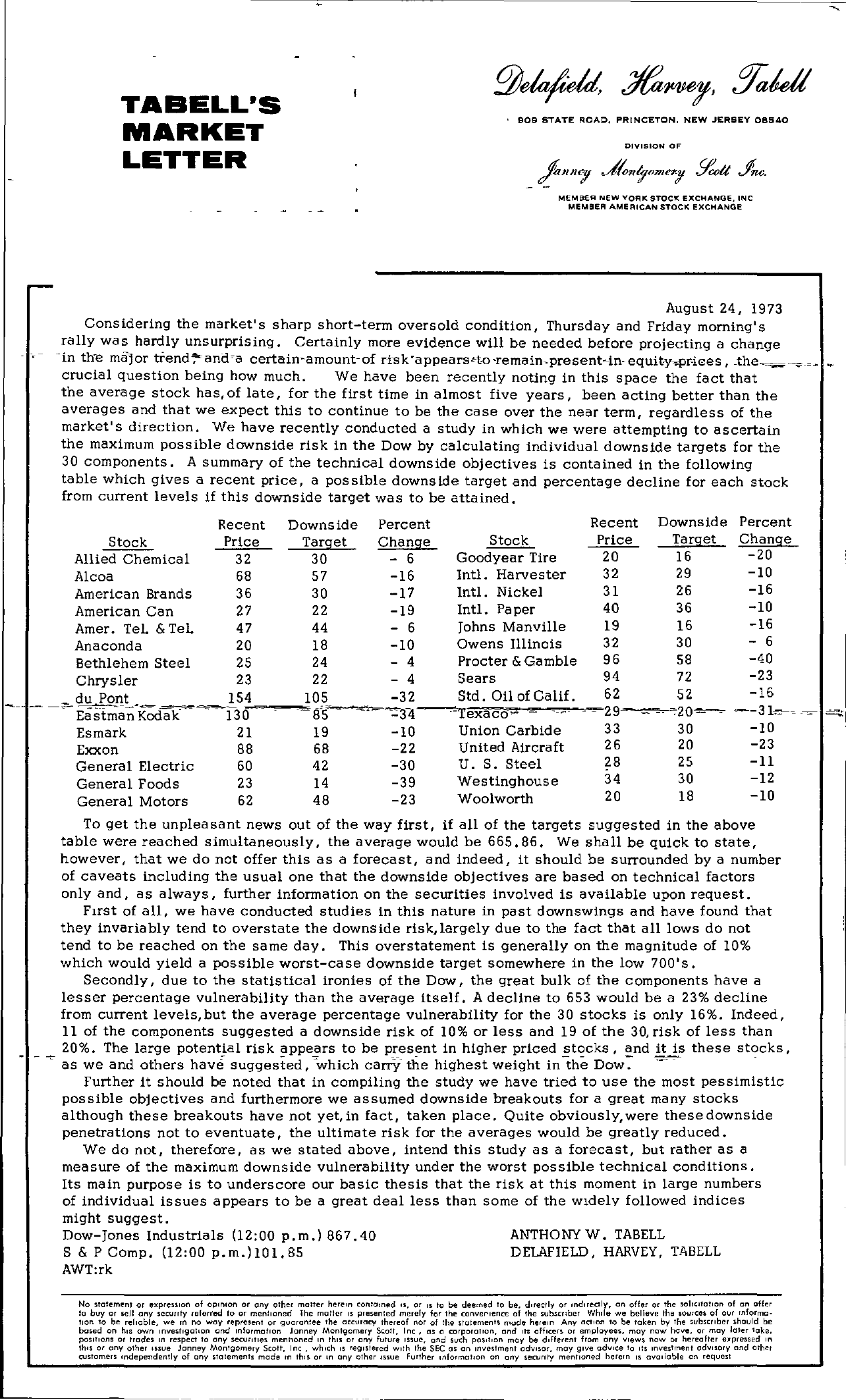 TABELL'S MARKET LETTER 909 STATE ROAD, PRINCETON. NEW JERSEY 08540 DIVISION OF MEMBER NEW VOAI( STOCK EXCHANGE, INC MEMBER AMERICAN STOCK EXCHANGE August 24, 1973 ConSidering the market's sharp short-term oversold condition, Thursday and Friday morning's rally was hardly unsurprising. Certainly more evidence will be needed before projecting a change – -in th-e malor tiend;'and-a certain-amount-of r-tsk'appears'to-remain-presentin-equitypr-ices, the. crucial question being how much. We have been recently noting in this space the fact that the average stock has, of late, for the first time in almost five years, been acting better than the averages and that we expect this to continue to be the case over the near term, regardless of the market's direction. We have recently conducted a study in which we were attempting to ascertain the maximum possible downside risk in the Dow by calculating individual downside targets for the 30 components. A summary of the technical downside objectives is contained in the following table which gives a recent price, a possible downside target and percentage decline for each stock from current levels if this downside target was to be attained. Recent Stock Price Allied Chemical 32 Alcoa 68 American Brands 36 American Can 27 Amer. TeL & TeL 47 Anaconda 20 Bethlehem Steel 25 Chrysler 23 du Pont 154 – – ar;'akc130 Esmark Exxon General Electric General Foods General Motors 21 88 60 23 62 Downside Target 30 57 30 22 44 18 24 22 105 8'5- 19 68 42 14 48 Percent Change -6 -16 -17 -19 -6 -10 -4 -4 -32 ';34 -10 -22 -30 -39 -23 Stock Goodyear Tire IntI. Harvester Intl. Nickel IntI. Paper Johns Manville Owens Illinois Procter & Gamble Sears Std. Oil of Calif. – Texaco- — Union Carbide United Aircraft U. S. Steel Westinghouse Woolworth Recent Price 20 32 31 40 19 32 96 94 62 29 33 26 28 34 20 Downside Percent Target Change 16 -20 29 -10 26 -16 36 -10 16 -16 30 – 6 58 -40 72 -23 52 -16 .20 –31– 30 -10 20 -23 25 -11 30 -12 18 -10 To get the unpleasant news out of the way first, if all of the targets suggested in the above table were reached simultaneously, the average would be 665.86. We shall be quick to state, however, that we do not offer this as a forecast, and indeed, it should be surrounded by a number of caveats including the usual one that the downside objectives are based on technical factors only and, as always, further information on the securities involved is available upon request. First of all, we have conducted studies in this nature in past downswings and have found that they invariably tend to overstate the downside risk, largely due to the fact that all lows do not tend to be reached on the sa me day. This overstatement is generally on the magnitude of 10 which would yield a possible worst-case downside target somewhere in the low 700's. Secondly, due to the statistical ironies of the Dow, the great bulk of the components have a lesser percentage vulnerability than the average itself. A decline to 653 would be a 23 decline from current levels,but the average percentage vulnerability for the 30 stocks is only 16. Indeed, 11 of the components suggested a downside risk of 10 or less and 19 of the 30, risk of less than 20. The large potential risk appears to be present in higher priced stocks, and it is these stocks, — as we and others have suggested, which carry the highest weight in the Dow- – Further it should be noted that in compiling the study we have tried to use the most peSSimistic possible objectives and furthermore we assumed downside breakouts for a great many stocks although these breakouts have not yet, in fact, taken place. Quite obviously, were these downside penetrations not to eventuate, the ultimate risk for the averages would be greatly reduced. We do not, therefore, as we stated above, intend this study as a forecast, but rather as a measure of the maximum downside vulnerability under the worst possible technical conditions. Its main purpose is to underscore our basic thesis that the risk at this moment in large numbers of individual issues appears to be a great deal less than some of the widelv followed indices might suggest. Dow-Jones Industrials (1200 p.m.) 867.40 ANTHONY W. TABELL S & P Compo (1200 p.m.)101.85 DELAFIELD, HARVEY, TABELL AWTrk No statement or expreulon of opinion or any other motter herein contamed IS, or IS 10 be deemed to be, d'redly or mdnedly, on offer or the sollcllollon of on offer to buy or sell any securrty referred 10 or mentioned The matter IS presented merely for the converlence of the subscriber Whde we believe the sources of our information to be reliable, we In no way represent or guarantee the accurOl;y thereof nor of the statements mude herein Any acl10n to be taken by the subscriber should be based on hiS own investigation and Information Janney Montgomery Scott, Inc, as a corporatIon, and Its offIcers or employees, may now have, or may loter lake, poSitIons or trades In respect to any securities menhoned In this or any future Issue, and such POSItIon moy be dIfferent from ony VIews now or hereafter e)'pressed In this or any otner Issue Janney Montgomery Scott, Inc, whIch IS registered With the SEC as an Investment advisor, may give advIce to Its Investment adVisory and other customers Independently of any statements mode In thiS or In any other Issue Further InformatIOn on any security mentioned herem IS ovarloble on request