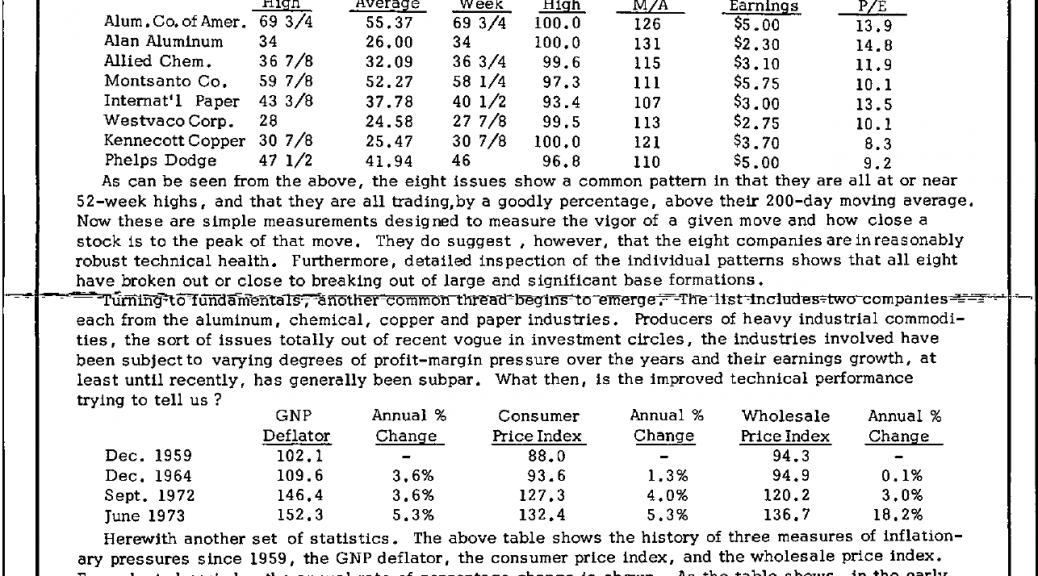 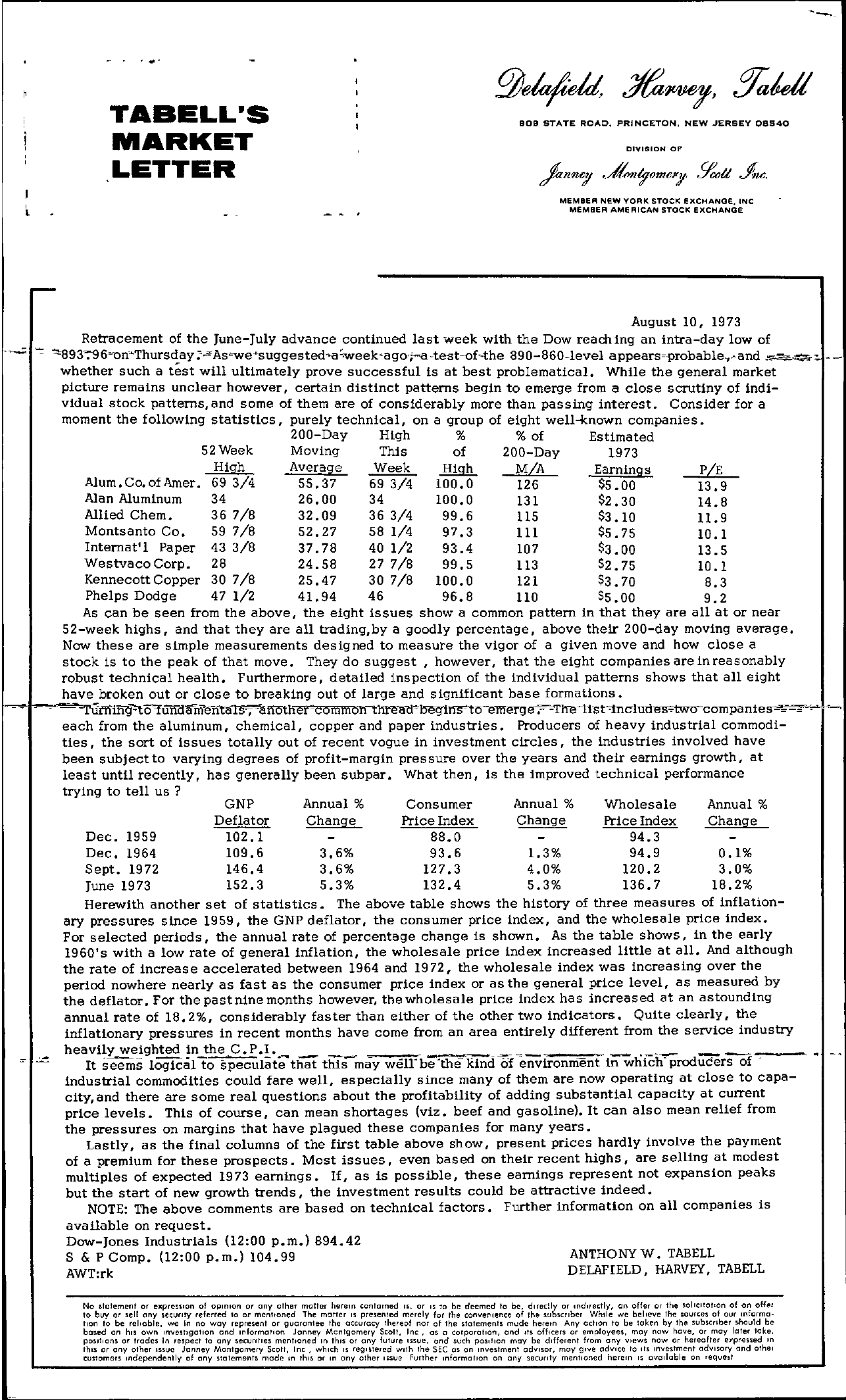 TABELL'S MARKET LETTER I l 909 STATE ROAD. PRINCETON, NEW .JERSEY 08540 DIVISION OF MEMBER NEW YORK STOCK EXCHANoe, INC MEMBER AMERICAN STOCK ExCHANGE August 10, 1973 Retracement of the June-July advance continued last week with the Dow reaching an intra-day low of 89379 6onThursday;-AsWesuggested–a'week'ago';-a -test-of–the 890-860-level appearsoprobable.,.- and whether such a test will ultimately prove successful is at best problematical. While the general market picture remains unclear however, certain distinct patterns begin to emerge from a close scrutiny of indi- vidual stock patterns,and some of them are of considerably more than passing interest. Consider for a moment the following statistics, purely technical, on a group of eight well-known companies. 200-Day High of Estimated 52 Week Moving This of 200-Day 1973 High Average Week High M/A Earnings PiE Alum. Co. of Amer. 693/4 Alan Aluminum 34 55.37 26.00 693/4 100.0 34 100.0 126 131 5.00 2.30 13.9 14.8 Allied Chern. 367/8 Montsanto Co. 597/8 32.09 52.27 363/4 581/4 99.6 97.3 115 111 3.10 5.75 11.9 10.1 Internat'l Paper 433/8 37.78 401/2 93.4 107 3.00 13.5 Westvaco Corp. 28 24.58 27 7/8 99.5 113 2.75 10.1 KennecottCopper 307/8 25.47 307/8 100.0 121 3.70 8.3 Phelps Dodge 471/2 41.94 46 96.8 110 5.00 9.2 As can be seen from the above, the eight issues show a common pattern in that they are all at or near 52-week highs, and that they are all trading,by a goodly percentage, above their 200-day moving average. Now these are simple measurements designed to measure the vigor of a given move and how close a stock is to the peak of that move. They do suggest, however, that the eight companies are in reasonably robust technical health. Furthermore, detailed ins pection of the individual patterns shows that all eight have broken out or close to breaking out of large and significant base formations. I-'-Ti1ffilngqO'Iunaanrentals. -anotlier common tl'U'l!lrdDegifiStll-emerge.- -TIm-ltst1naludBtwo-companies each from the aluminum, chemical, copper and paper industries. Producers of heavy industrial commodi- ties, the sort of issues totally out of recent vogue in investment circles, the industries involved have been subjectto varying degrees of profit-margin pressure over the years and their earnings growth, at least until recently, has generally been subpar. What then, is the improved technical performance trying to tell us GNP Deflator Annual Change Consumer Price Index Annual Change Wholesale Price Index Annual Change Dec. 1959 Dec. 1964 Sept. 1972 June 1973 102.1 109.6 146.4 152.3 3.6 3.6 5.3 88.0 93.6 127.3 132.4 1.3 4.0 5.3 94.3 94.9 120.2 136.7 0.1 3.0 18.2 Herewith another set of statistics. The above table shows the history of three measures of inflation- ary pressures since 1959, the GNP deflator, the consumer price index, and the wholesale price index. For selected periods, the annual rate of percentage change is shown. As the table shows, in the early 1960's with a low rate of general inflation, the wholesale price index increased little at all. And although the rate of increase accelerated between 1964 and 1972, the wholesale index was increasing over the period nowhere nearly as fast as the consumer price index or as the general price level, as measured by the deflator. For the past nine months however, the wholesale price index has increased at an astounding annual rate of 18.2, considerably faster than either of the other two indicators. QUite clearly, the inflationary pressures in recent months have come from an area entirely different from the service industry seemsheavily weighted in the C.P.I. ..,- It 10000iiltorpecuiatethat thlsmay welrbe-the khidiif,mvironment ihiChprodrs of industrial commodities could fare well, especially since many of them are now operating at close to capa- City, and there are some real questions about the profitability of adding substantial capacity at current price levels. This of course, can mean shortages (viz. beef and gasoline). It can also mean relief from the pressures on margins that have plagued these companies for many years. Lastly, as the final columns of the first table above show, present prices hardly involve the payment of a premium for these prospects. Most issues, even based on their recent highs, are selling at modest multiples of expected 1973 earnings. If, as is possible, these earnings represent not expansion peaks but the start of new growth trends, the investment results could be attractive indeed. NOTE The above comments are based on technical factors. Further information on all companies is available on request. Dow-Jones Industrials (1200 p.m.) 894.42 S & P Compo (1200 p.m.) 104.99 AWTrk ANTHONY W. TABELL DELAFIELD, HARVEY, TABELL No statement or elCpreS510n of opinion or any other molter herem contorned IS, or IS 10 be deemed 10 be, directly or rnd,rec1ly, on offer or the SOII(llollon of on offer to bvy or sell cny security referred 10 or menhoned The matter IS presented merely for the conVel'lence of the subscriber While 'Ie believe the sources of our information to be reliable, we In no way represent or guarantee the accuracy thereof nor of the statements mude herein Any action to be token by the subSCriber hould be based on hiS own Inveshgollon and information Janney Mentgomery SCali, Inc, as a corporotlon, and ,ts officers or employees, may now have, or may later toke, POSitions or Irades In respect to any securities menhoned In thiS or any future Issue, ond such pos,lion may be dofferen! from any views now or hereafter e1pressed In thiS or any other Issue Janney Montgomery Scott, tnc , which IS reg,stered With the SEC os on Investment adVisor, may g,ve adVice to Its Investment adVisory and othel customers Independently of any statements mode In Ih,s or In ony other ,ssue Further Information on any securoty mentioned her!!ln IS ovailable on request