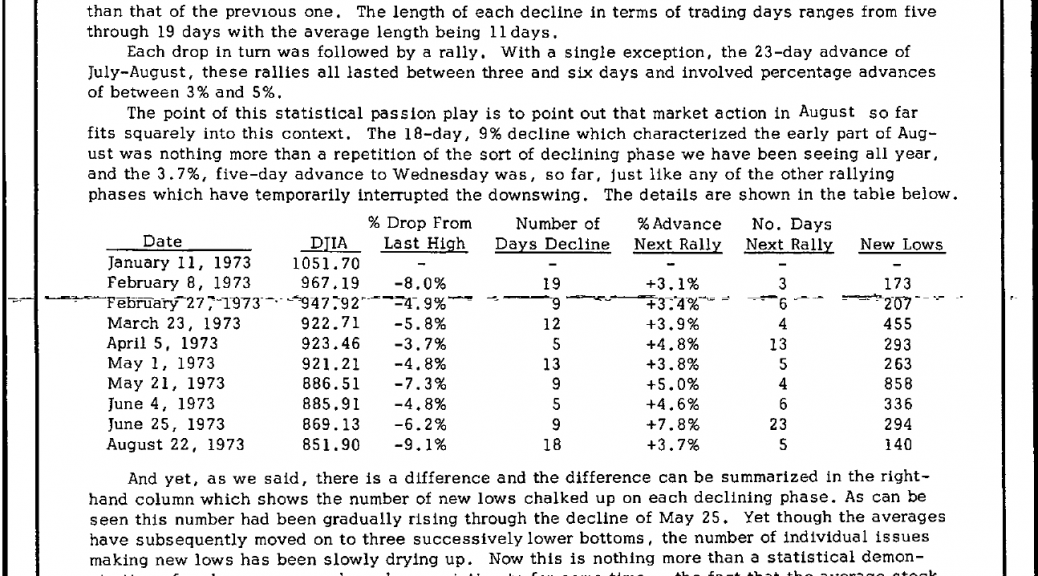 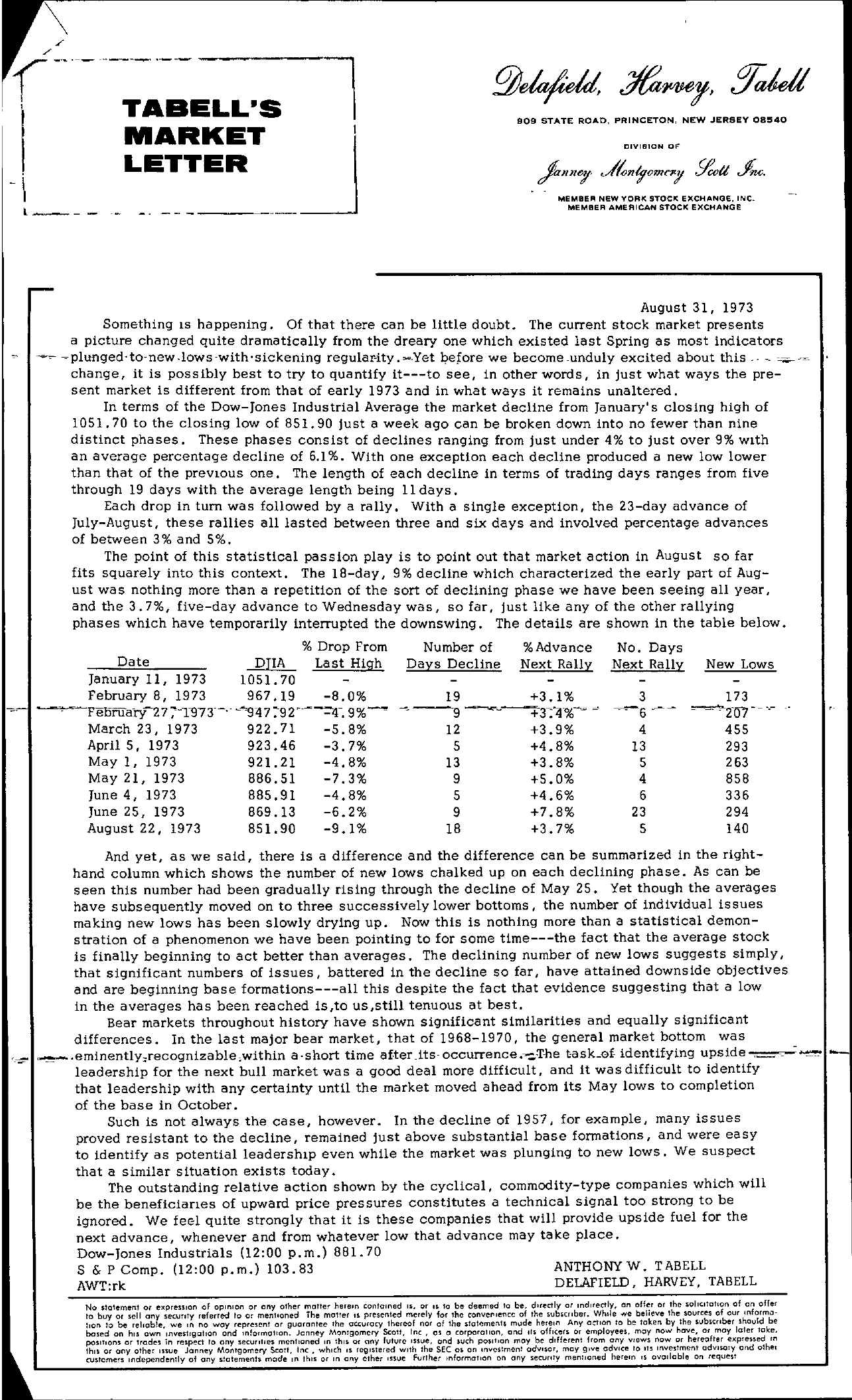 ') /' f I—–AaELL.s JlMARKET LETTER l -. ——- 909 STATE ROAD, PRINCETON, NEW JERSEY 08!540 DIVISION OF MEMBER NEW YORK STOCK EXCHANGE. INC. MEMBER AMERICAN STOCK EXCHANGE August 31, 1973 Something 1S happening. Of that there can be little doubt. The current stock market presents a picture changed quite dramatically from the dreary one which existed last Spring as most indicators plunged to-new .lows 'with 'sickening regular-ity. Yet l;eJore we become .unduly excited about this. -. change, it is possibly best to try to quantify it—to see, in other words, in just what ways the present market is different from that of early 1973 and in what ways it remains unaltered. In terms of the Dow-Jones Industrial Average the market decline from January's closing high of 1051. 70 to the closing low of 851. 90 just a week ago can be broken down into no fewer than nine distinct phases. These phases consist of declines ranging from just under 4 to just over 9 w1th an average percentage decline of 6.1 . With one exception each decline produced a new low lower than that of the prevlOUS one. The length of each decline in terms of trading days ranges from five through 19 days with the average length being 11 days. Each drop in turn was followed by a rally. With a Single exception, the 23-day advance of July-August, these rallies all lasted between three and six days and involved percentage advances of between 3 and 5. The point of this statistical passion play is to point out that market action in August so far fits squarely into this context. The 18-day, 9 decline which characterized the early part of August was nothing more than a repetition of the sort of declining phase we have been seeing all year, and the 3.7, five-day advance to Wednesday was, so far, just like any of the other rallying phases which have temporarily interrupted the downswing. The details are shown in the table below. Drop From Date DIIA Last High January II, 1973 1051. 70 February 8, 1973 967.19 -8.0 feoruar,,-277-T973'-' -'947 92—-4-. 9– March 23, 1973 922.71 -5.8 April 5, 1973 923.46 -3.7 May I, 1973 921.21 -4.8 May21,1973 886.51 -7.3 June 4, 1973 885.91 -4.8 June 25, 1973 869.13 -6.2 August 22, 1973 851. 90 -9.1 Number of Advance Days Decline Next Rally 19 3.1 – 9 …………—-T-4 12 3.9 5 4.8 13 3.8 9 5.0 5 4.6 9 7.8 18 3.7 No. Days Next Rally New Lows 3 6 — . 4 13 5 4 6 23 5 173 2'07— 455 293 263 858 336 294 140 And yet, as we said, there is a difference and the difference can be summarized in the right- hand column which shows the number of new lows chalked up on each declining phase. As can be seen this number had been gradually rising through the decline of May 25. Yet though the averages have subsequently moved on to three successively lower bottoms, the number of individual issues making new lows has been slowly drying up. Now this is nothing more than a statistical demon- stration of a phenomenon we have been pointing to for some time—the fact that the average stock is finally beginning to act better than averages. The declining number of new lows suggests simply, that significant numbers of issues, battered in the decline so far, have attained downside objectives and are beginning base formations—all this despite the fact that evidence suggesting that a low In the averages has been reached iS,to uS,still tenuous at best. Bear markets throughout history have shown significant similarities and equally significant differences. In the last major bear market, that of 1968-1970, the general market bottom was 1–0 …,..,.-.eminently,recognizable,within a short time after .its occurrence.–.The task-of identifying upside. – – – I leadership for the next bull market was a good deal more difficult, and it was difficult to identify that leadership with any certainty until the market moved ahead from its May lows to completion of the base in October. Such is not always the case, however. In the decline of 1957, for example, many issues proved resistant to the decline, remained just above substantial base formations, and were easy to identify as potential leadersh1p even while the market was plunging to new lows. We suspect that a similar situation exists today. The outstanding relative action shown by the cyclical, commodity-type companies which will be the beneficianes of upward price pres sures constitutes a technical signal too strong to be ignored. We feel quite strongly that it is these companies that will provide upside fuel for the next advance, whenever and from whatever low that advance may take place. Dow-Jones Industrials (1200 p.m.) 881. 70 S & P Compo (1200 p.m.) 103.83 AWTrk ANTHONY W. T ABELL DELAFIELD, HARVEY, TAB ELL No stotement or expression of opinion or any other matter here, tontomed IS, or n to be deemed to be. directly or indirectly, on offer or Ihe sollC-llohon of on offer to buy or sell any secunty referred to or menlloned The moller n presented merely for the conver'lenct of Ihe subscrIber. WhIte e believe Ihe sources of our Informo tlon 10 be relloble, we ,n no woy represenl or guorontee the accurocy thereof nor of the statements m\.lde hereIn Any octlon to be laken by the subscriber should be based on h,s own InvestIgatIon ond Informahon. Janney Monlgomery Scoll, Inc, os a corporatIon, ond Its offIcers or employees, may now have, or may loter take, poSItIons or trodes in respect to ony secuntles mentioned In Ih,s or Clny future Issue, ond such POSition moy be dIfferent from any vIews now or hereofter expressed In Ih,s or any other Issue Janney Montgomery Scolt, Inc, whIch IS registered With Ihe SEC 0 on Investment adVIsor, may give adVIce to Its Investment adv,O'y and olhel customers Independently of ony statements mode In Ihls or In ony ether Issue Further Informotlon on ony security mentIoned herein IS ovailable on request