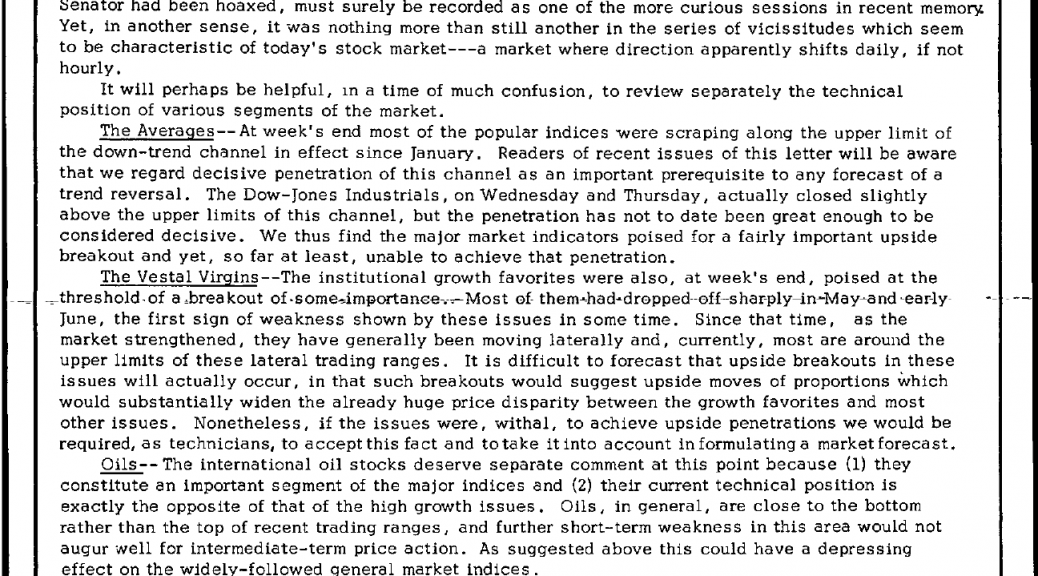 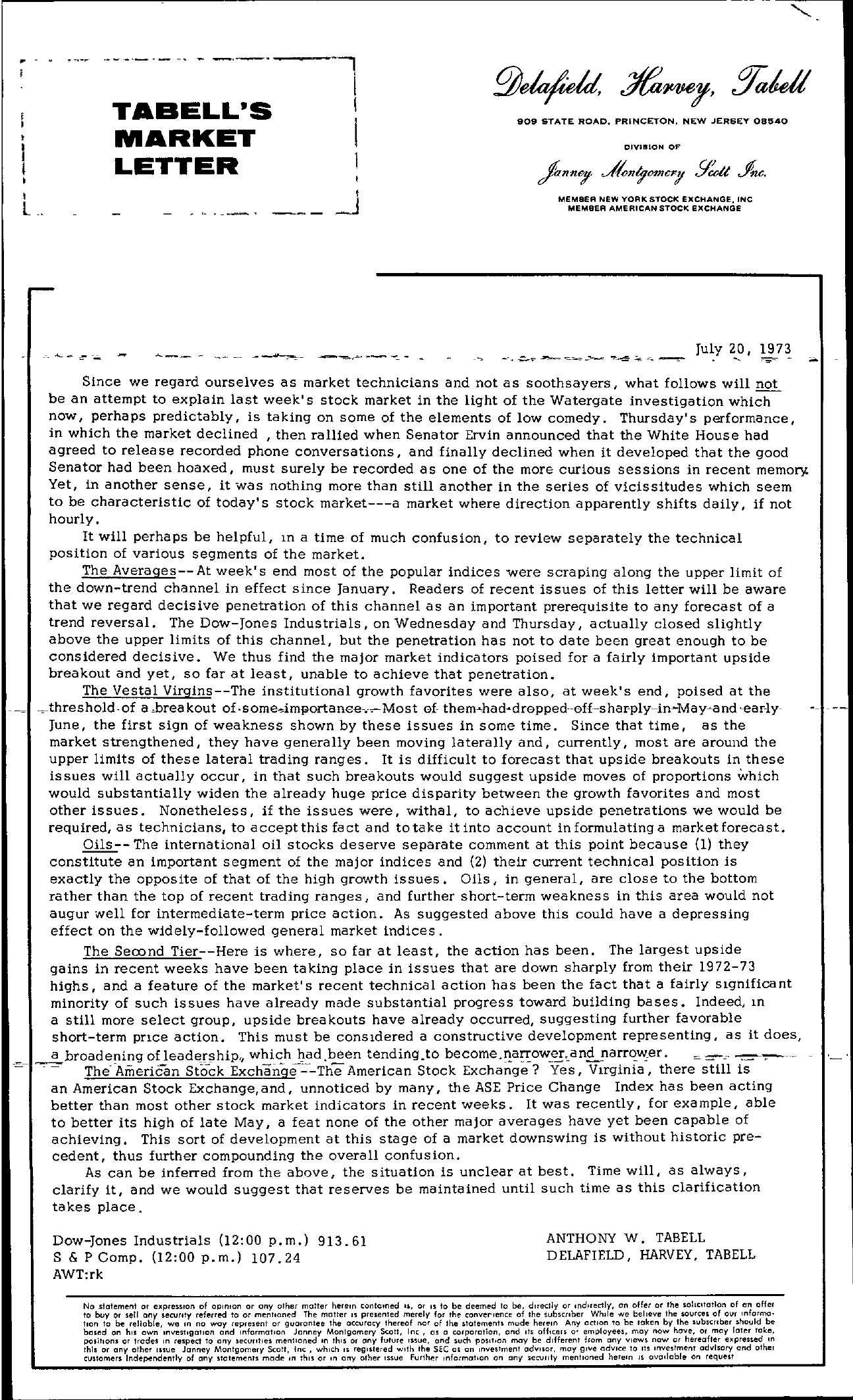 . – . ——- -, – –.—-., I TABELL'S I , I (,, MARKET LETTER I 1 l 909 STATE ROAD, PRINCETON, NEW JERSEY 081540 DIVISION OF MEMBER NEW YORK STOCIC eXCHANGE, INC MEMBER AMERICAN STOCk eXCHANGE —— -..- July 20, 1973 …… Since we regard ourselves as market technicians and not as soothsayers, what follows will not be an attempt to explain last week's stock market in the light of the Watergate investigation which now, perhaps predictably, is taking on some of the elements of low comedy. Thursday's performance, in which the market declined , then rallied when Senator Ervin announced that the White House had agreed to release recorded phone conversations, and finally declined when it developed that the good Senator had been hoaxed, must surely be recorded as one of the more curious sessions in recent memolt Yet, in another sense, it was nothing more than still another in the series of vicissitudes which seem to be characteristic of today's stock market—a market where direction apparently shifts daily, if not hourly. It will perhaps be helpful, In a time of much confUSion, to review separately the technical position of various segments of the market. The Averages– At week's end most of the popular indices were scraping along the upper limit of the down-trend channel in effect since January. Readers of recent issues of this letter will be aware that we regard decisive penetration of this channel as an important prerequisite to any forecast of a trend reversal. The Dow-Jones Industrials, on Wednesday and Thursday, actually closed slightly above the upper limits of this channel, but the penetration has not to date been great enough to be considered decisive. We thus find the major market indicators poised for a fairly important upside breakout and yet, so far at least, unable to achieve that penetration. The Vestal Virgins–The institutional growth favorites were also, at week's end, poised at the threshold- of a .breakout of ,someimportanee.-Most of themhaddropped–oH-shar-ply-inMay-and -ear-ly- June, the first sign of weakness shown by these issues in some time. Since that time, as the market strengthened, they have generally been moving laterally and, currently, most are around the upper limits of these lateral trading ranges. It is difficult to forecast that upside breakouts in these issues will actually occur, in that such breakouts would suggest upside moves of proportions which would substantially widen the already huge price disparity between the growth favorites and most other issues. Nonetheless, if the issues were, withal, to achieve upside penetrations we would be required, as technicians, to accept this fact and to take it into account in formulating a market forecast. Oils– The international oil stocks deserve separate comment at this point because (1) they constitute an important segment of the major indices and (2) their current technical pOSition is exactly the oppOSite of that of the high growth issues. Oils, in general, are close to the bottom rather than the top of recent trading ranges, and further short-term weakness in this area would not augur well for intermediate-term price action. As suggested above this could have a depressing effect on the widely-followed general market indices. The Second Tier–Here is where, so far at least, the action has been. The largest upside gains in recent weeks have been taking place in issues that are down sharply from their 1972-73 highs, and a feature of the market's recent technical action has been the fact that a fairly Significant minority of such issues have already made substantial progress toward building bases. Indeed, In a still more select group, upside breakouts have already occurred, suggesting further favorable short-term pnce action. This must be conSidered a constructive development representing, as it does, –a broadening ofleadership which had ,been tending.to become.n.arrowcan3..narro.wer. —,,– — The–American Stock Exchange.–The American Stock Exchange Yes, Virginia, there still is an American Stock Exchange, and, unnoticed by many, the ASE Price Change Index has been acting better than most other stock market indicators in recent weeks. It was recently, for example, able to better its high of late May, a feat none of the other major averages have yet been capable of achieving. This sort of development at this stage of a market downswing is without historic precedent, thus further compounding the overall confUSion. As can be inferred from the above, the situation is unclear at best. Time will, as always, clarify it, and we would suggest that reserves be maintained until such time as this clarification takes place. Dow-Jones Industrials (1200 p. m.) 913.61 S & P Compo (1200 p. m.) 107.24 AWTrk ANTHONY W. TABELL DELAFIELD, HARVEY. TAB ELL No statement or eopreSlon of opinion or any otner molter herem contolned 15, or IS 10 be deemed to be, dlredly or cndlrectly, on offer or the 50llcltollon of on offer to buy or sell any security referred to or mentioned The motter IS presented merely for Ihe converlence of Ihe subSCriber WhIle He believe the sources of our Informolion to be relloble, we In no way represent or guarantee Ihe accura!;)' thereof nor of the slotements mude herein Any adlon to be loken by the subSCriber should be based on hiS own Invesllgat,on and infOrmation Janney Montgomery Scott, Inc, as a corporation, ond Its officers 0 employees, may now have, or may later take, poslhons or trades In respect to any secUrities mentioned In thiS or any future Issue, and such paslt,on may be different from any views now or hereafter expressed In this or any other luue Janney Montgomery Scott, Inc, which IS registered wl,h the SEC as an Investment adVisor, may give adVice to lIS Investment advisory and other cuslomers Independently of any statements mode In thiS or In any other Issue Further Informahon on any security mentioned hereIn IS OVOilabie on request