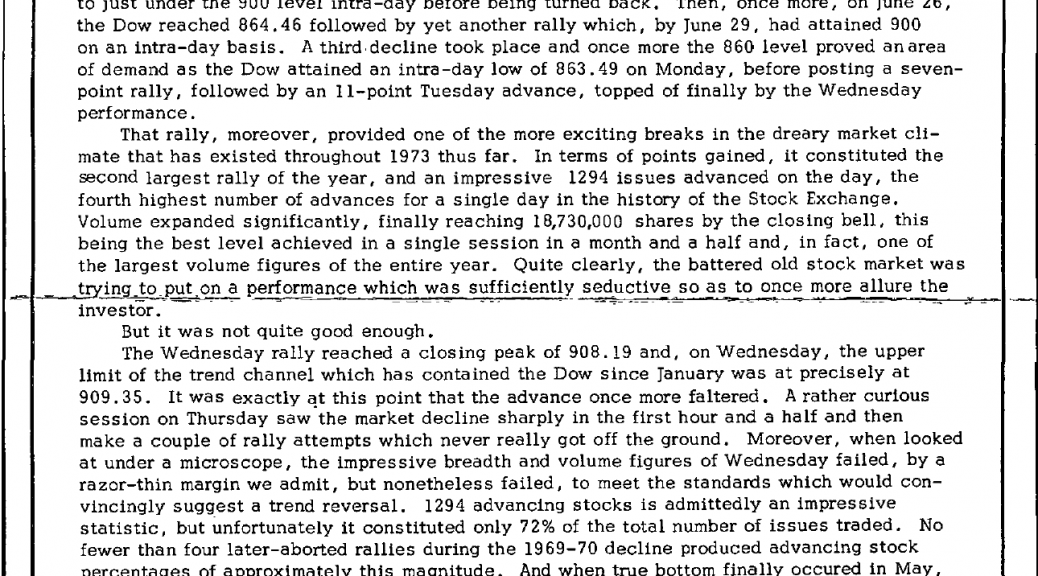 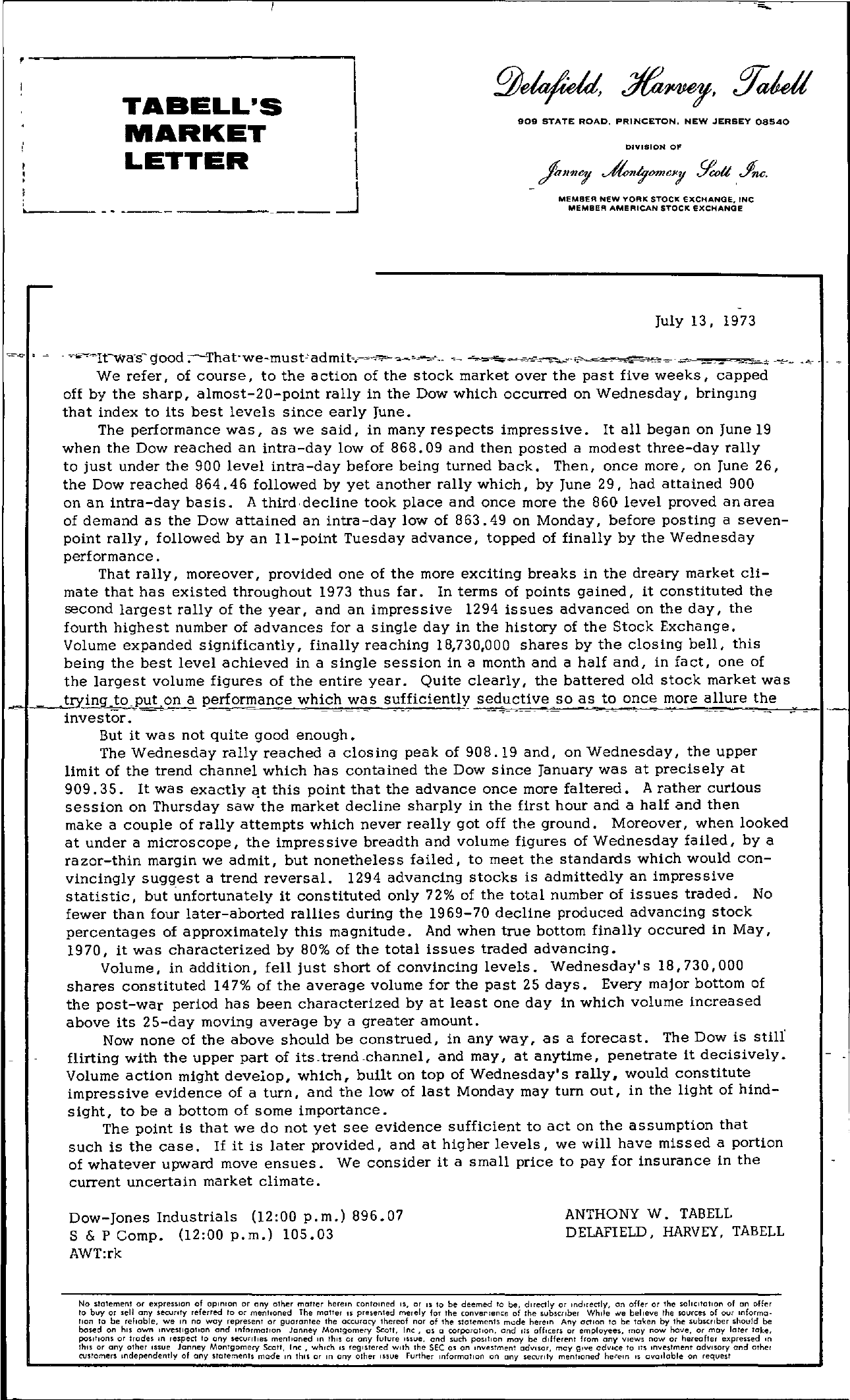 ,———————————–, TABELL'S MARKET LETTER J 909 STATE ROAD, PRINCETON, NEW JERSEY 08540 DIVISION OF' MEM8ER NEW YORK STOCK eXCHANGE, INC MEMBER AMERICAN STOCK EXCHANGe July 13, 1973 good -. — n … -n ,-..It-was- That-we-must–admih''- …….–' .n n -0-. – We refer, of course, to the action of the stock market over the past five weeks, capped off by the sharp, almost-20-point rally in the Dow which occurred on Wednesday, bringmg that index to its best levels since early June. The performance was, as we said, in many respects impressive. It all began on June 19 when the Dow reached an intra-day low of 868.09 and then posted a modest three-day rally to just under the 900 level intra-day before being turned back. Then, once more, on June 26, the Dow reached 864.46 followed by yet another rally which, by June 29, had attained 900 on an intra-day basis. A third,decline took place and once more the 860 level proved anarea of demand as the Dow attained an intra-day low of 863.49 on Monday, before posting a seven- point rally, followed by an ll-point Tuesday advance, topped of finally by the Wednesday performance. That rally, moreover, provided one of the more exciting breaks in the dreary market cli- mate that has existed throughout 1973 thus far. In terms of points gained, it constituted the second largest rally of the year, and an impressive 1294 issues advanced on the day, the fourth highest number of advances for a single day in the history of the Stock Exchange. Volume expanded significantly, finally reaching 18,730,000 shares by the closing bell, this being the best level achieved in a single session in a month and a half and, in fact, one of the largest volume figures of the entire year. Quite clearly, the battered old stock market was f..tryingtoputon a performance which was suficiently seductive so as to once more allure the investor. — – — — – –. But it wa s not quite good enough. The Wednesday rally reached a closing peak of 908.19 and, on Wednesday, the upper limit of the trend channel which has contained the Dow since January was at precisely at 909.35. It was exactly t this point that the advance once more faltered. A rather curious session on Thursday saw the market decline sharply in the first hour and a half and then make a couple of rally attempts which never really got off the ground. Moreover, when looked at under a microscope, the impressive breadth and volume figures of Wednesday failed, by a razor-thin margin we admit, but nonetheless failed, to meet the standards which would convincingly suggest a trend reversal. 1294 advancing stocks is admittedly an impressive statistic, but unfortunately it constituted only 72 of the total number of issues traded. No fewer than four later-aborted rallies during the 1969-70 decline produced advancing stock percentages of approximately this magnitude. And when true bottom finally occured in May, 1970, it was characterized by 80 of the total issues traded advancing. Volume, in addition, fell just short of convincing levels. Wednesday's 18,730,000 shares constituted 147 of the average volume for the past 25 days. Every major bottom of the post-war period has been characterized by at least one day in which volume increased above its 25-day moving average by a greater amount. Now none of the above should be construed, in any way, as a forecast. The Dow is stilf flirting with the upper part of its trend channel, and may, at anytime, penetrate it decisively. Volume action might develop, which, built on top of Wednesday's rally I would constitute impressive evidence of a turn, and the low of last Monday may turn out, in the light of hind- sight, to be a bottom of some importance. The point is that we do not yet see evidence sufficient to act on the assumption that such is the case. If it is later provided, and at higher levels, we will have missed a portion of whatever upward move ensues. We consider it a small price to pay for insurance in the current uncertain market climate. Dow-Jones Industrials (1200 p.m.) 896.07 S & P Compo (1200 p.m.) 105.03 AWTrk ANTHONY W. TABELL DELAFIELD, HARVEY, TABELL No stafement Of e)lpreUlon of opinion or any other motter herem contolned IS, or IS 10 be deemed 10 be, directly or indirectly, on offer Of the SOIU;llollon of on offer to bvy or sell any sec;unly referred to or mentioned The molter IS presented merely for the converlenee of the subSCriber While oNe believe the sources of our Informa- Tion fa be reliable, we In no way represent or guarantee the accuracy thereof nor of the statements mude herein Any action to be taken by the subscriber should be based on hiS own InveStlgalian and information Janney Montgomery Scali, Inc, as a corporation, and Its officers or employees, may now have, or may later toke, positions or trades In respect to any securities mentioned In thiS or any future ISsue, and such position may be different from any views now or hereafter expressed In thu or any other Issue Janney Montgomery Scott, Inc, which IS registered With the SEC as on Investment adVisor, may give adVice to liS ,vestment adVisory and othel customers II'ldependently of any slatements made In thl or In any other Issue Further information on ony securoty menTIoned hefeln IS available on request