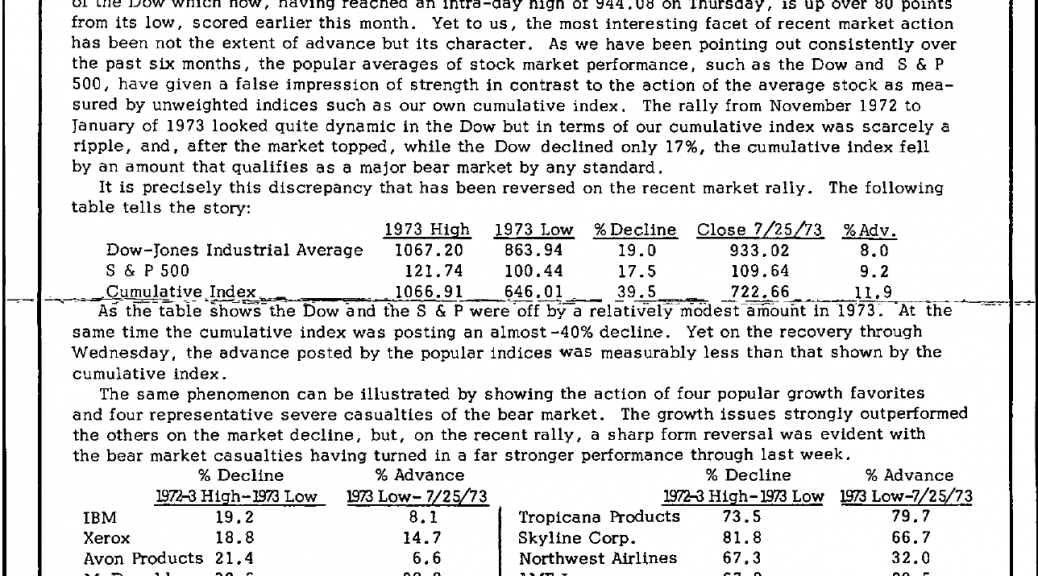 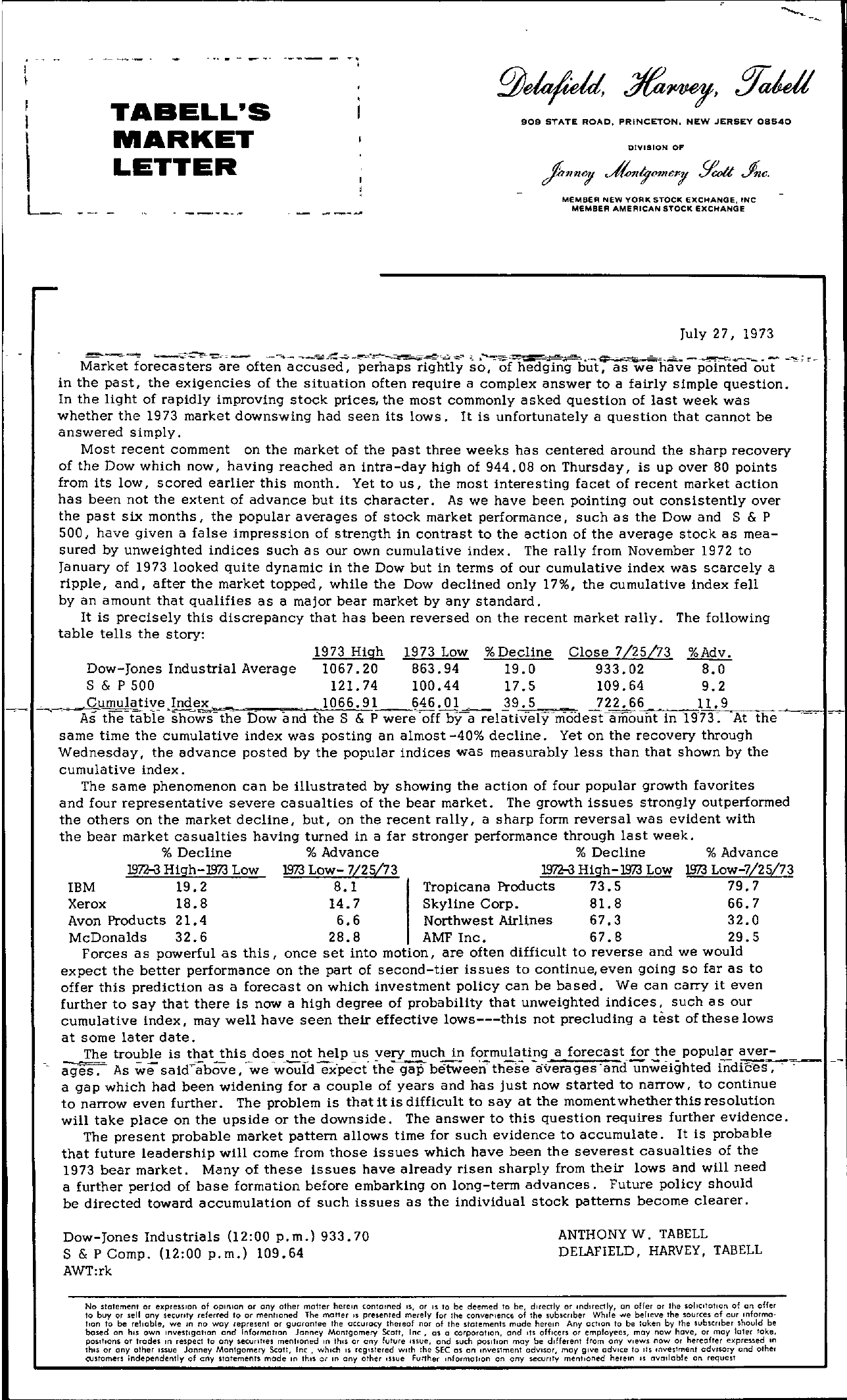 I I TABELL-S I MARKET LETTER L — 909 STATE ROAD, PRINCETON, NEW JERSEY 08540 DIVISION OF MEMBEA NEW VORK STOCK EXCHANGE, INC MEMBER AMERICAN STOCK eXCHANGE July 27, 1973 —– '– – . ;.—….- –….;.- .–'',.. o-'– …,.!!…,….2.– —……… ….—-. – -; Market forecasters are often accused, perhaps rightly so, of hedging but, as we have pOinted out in the past, the exigencies of the situation often require a complex answer to a fairly simple question. In the light of rapidly improving stock prices, the most commonly asked question of last week was whether the 1973 market downswing had seen its lows. It is unfortunately a question that cannot be answered simply. Most recent comment on the market of the past three weeks has centered around the sharp recovery of the Dow which now, having reached an intra-day high of 944.08 on Thursday, is up over 80 pOints from its low, scored earlier this month. Yet to us, the most interesting facet of recent market action has been not the extent of advance but its character. As we have been pOinting out consistently over the past six months, the popular averages of stock market performance, such as the Dow and S & p 500, have given a false impression of strength in contrast to the action of the average stock as mea- sured by unweighted indices such as our own cumulative index. The rally from November 1972 to January of 1973 looked quite dynamic in the Dow but in terms of our cumulative index was scarcely a ripple, and, after the market topped, while the Dow decllned only 17, the cumulative index fell by an amount that qualifies as a major bear market by any standard. It is precisely this discrepancy that has been reversed on the recent market rally. The following table tells the story 1973 High 1973 Low Decline Close 7/25/73 Adv. Dow-Jones Industrial Average 1067.20 863.94 19.0 933.02 8.0 S&P500 121.74100.44 17.5 109.64 9.2 ;pmuh,e.!nd. . . .1066.91 \i46.01.– 9 …5. .22.66.,.. 1;;;l;-o.9,,,c1 As the table shows the Dow and the S & P were off by a relatively modest amount in 19-73. At the — same time the cumulative index was posting an almost -40 decline. Yet on the recovery through Wednesday, the advance posted by the popular indices was measurably less than that shown by the cumulative index. The same phenomenon can be illustrated by showing the action of four popular growth favorites and four representative severe ca sualties of the bear market. The growth issues strongly outperformed the others on the market decline, but, on the recent rally, a sharp form reversal was evident with the bear market casualties having turned in a far stronger performance through last week. Decline Advance Decline Advance 197J.,3 High-1973 Low 1973 Low- 7/25/73 197J.,3 Hlgh-1973 Low 1973 Low-7/25/73 IBM 19.2 8. 1 Tropicana Products 73.5 79.7 Xerox 18.8 14.7 Skyline Corp. 81.8 66.7 Avon Products 21.4 6.6 Northwest Airlines 67.3 32.0 McDonalds 32.6 28.8 AMFInc. 67.8 29.5 Forces as powerful as this, once set into motion, are often difficult to reverse and we would expect the better performance on the part of second-tier issues to continue, even going so far as to offer this prediction as a forecast on which investment policy can be based. We can carry it even further to say that there is now a high degree of probability that unweighted indices, such as our cumulative index, may well have seen their effective lows—this not precluding a test of these lows at some later date. weThe trouble is that this does not help us very much in formulating a forecast for the popular aver- ages. As said-abOVe, -we wOilldex-pect' the—–gapb.rtWeen these -aVerages -andun;;;eighted indiceS, – a gap which had been widening for a couple of years and has just now started to narrow, to continue to narrow even further. The problem is that it is difficult to say at the moment whether this resolution will take place on the upside or the downside. The answer to this question requires further evidence. The present probable market pattern allows time for such evidence to accumulate. It is probable that future leadership will come from those issues which have been the severest casualties of the 1973 bear market. Many of these issues have already risen sharply from their lows and will need a further period of base formation before embarking on long-term advances. Future policy should be directed toward accumulation of such issues as the individual stock patterns become clearer. Dow-Jones Industrials (1200 p.m.) 933.70 S & P Compo (1200 p.m.) 109.64 AWTrk ANTHONY W. TABELL DELAFIELD, HARVEY, TABELL No statement Of expression of opinion or ony other matler herein contOlned 15, or IS to be deemed to be, directly or ,directly, on offer or the SOllCllotlon of an oHer to buy or sell any seCUrity referred 10 or mentioned The matter IS presented merely for the conver'lenCE; of the subscriber While -He believe the sources of our ,formation to be reliable, we In no way represent or guarantee the accuracy thereof nor of the statements mude herein Any action to be taken by the subscriber should be based on hu own ,vestlgahon and Informahon Janney Montgomery Scott, Inc, as a corporation, and Its offICers or employees, may now have, or may iater loke, poslhons or trades In respect to any secunltes menttoned In Ih,s or any future Issue, and such paslhon may be different from any views now or hereafter expressed ' thIS or any alher Issue Janney Monlgomery Scali, Inc, which IS regIstered wtlh the SEC as on Investment adVisor, may give adVice to lIs Investment adVISOry and athel customers Independently of any statements mode, thIS or In any other Issue Further Informahon on cny securtty mentIoned herem IS avaIlable on request