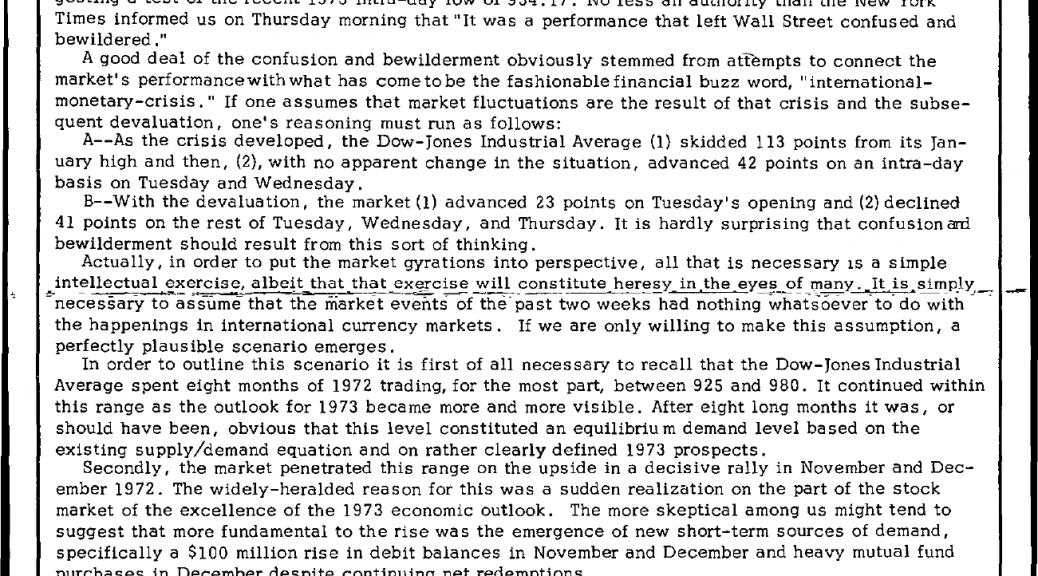 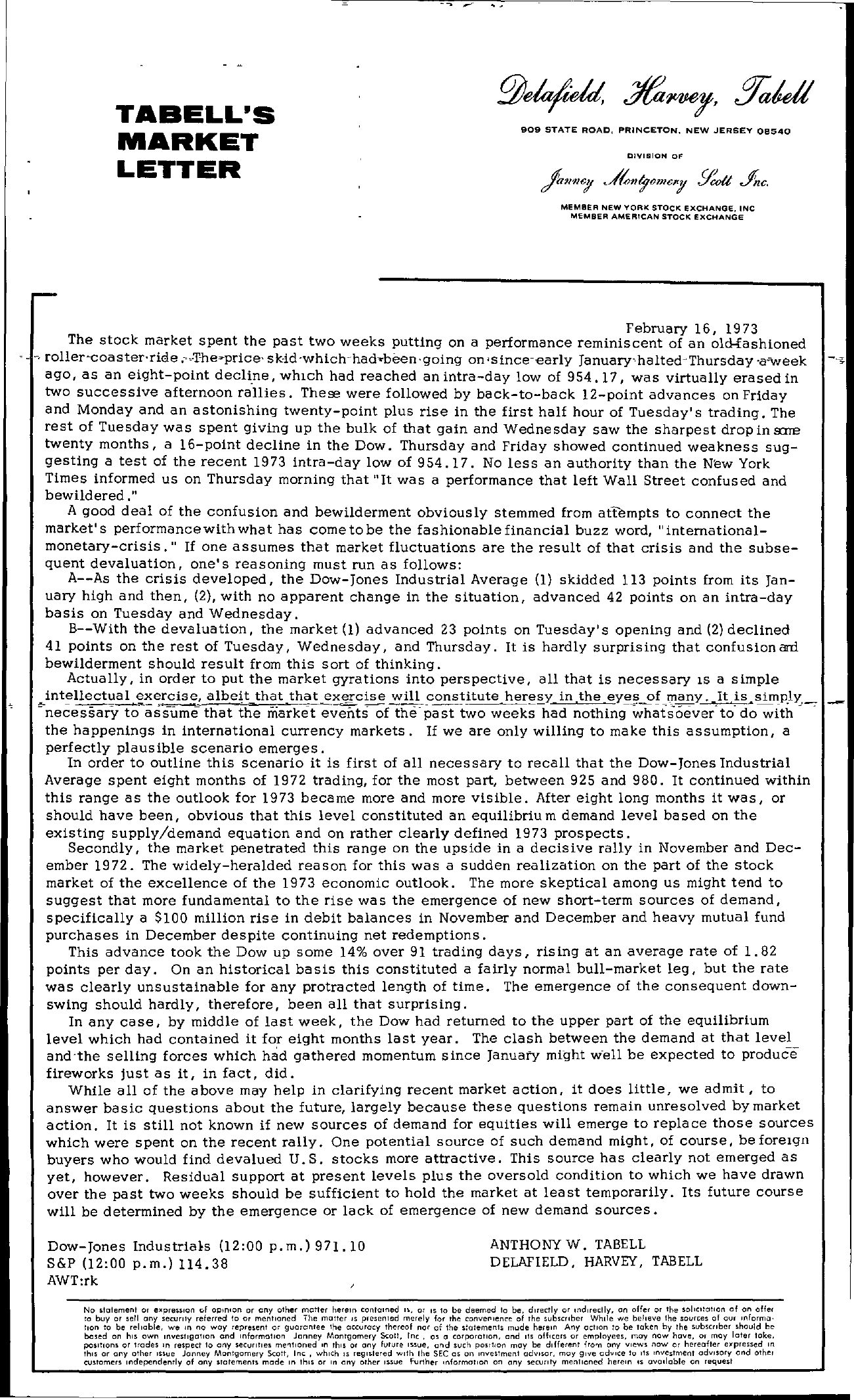 TABELL'S MARKET LETTER 909 STATE ROAD, PRINCETON. NEW JERSEY 08540 DIVISION OF MEMBER NEW YORK STOCK EXCHANGe, INC MEMBER AMERICAN STOCK EXCHANGE February 16, 1973 The stock market spent the past two weeks putting on a performance reminiscent of an old-fashioned – -, roller-coaster-ride .-.-T-heprice- sk-id -which-hadbeen-going on'since-early January-halted-Thursday -a'week ago, as an eight-point decline, WhICh had reached an intra-day low of 954.17, was virtually erased in two successive afternoon rallies. There were followed by back-to-back 12-point advances on Friday and Monday and an astonishing twenty-point plus rise in the first half hour of Tuesday's trading. The rest of Tuesday was spent giving up the bulk of that gain and Wednesday saw the sharpest drop in sne twenty months, a 16-point decline in the Dow. Thursday and Friday showed continued weakness suggesting a test of the recent 1973 intra-day low of 954.17. No less an authority than the N'ew York Times informed us on Thursday morning that It wa s a performance that left Wall Street confus ed and bewildered. A good deal of the confusion and bewilderment obviously stemmed from attempts to connect the market's performance with what has come to be the fashionable financial buzz word, intemationalmonetary-crisis. If one assumes that market fluctuations are the result of that crisis and the subsequent devaluation, one's reasoning must run as fOllows A–As the crisis developed, the Dow-Jones Industrial Average (1) skidded 113 pOints from its January high and then, (2), with no apparent change in the situation, advanced 42 points on an intra-day basis on Tuesday and Wednesday. B–With the devaluation, the market (1) advanced 23 points on Tuesday's opening and (2) declined 41 points on the rest of Tuesday, Wednesday, and Thursday. It is hardly surprising that confusionard bewilderment should result from this sort of thinking. Actually, in order to put the market gyrations into perspective, all that is necessary IS a simple intellectual exercise, albeit that that exercise will constitute heresy in the eyes of many. It is simply 0-necessaryassume- that the market eveittsof the past two weeks had nothing-hatsoever- to- d—;;;ith -' the happenings in international currency markets. If we are only willing to make this assumption, a perfectly plausible scenario emerges. In order to outline this scenario it is first of all necessary to recall that the Dow-Jones Industrial Average spent eight months of 1972 trading, for the most part, between 925 and 980. It continued within this range as the outlook for 1973 became more and more visible. After eight long months it was, or should have been, obvious that this level constituted an equilibriu m demand level based on the existing supply/demand equation and on rather clearly defined 1973 prospects. Secondly, the market penetrated this range on the upside in a decisive rally in November and Dec- ember 1972. The widely-heralded reason for this was a sudden realization on the part of the stock market of the excellence of the 1973 economic outlook. The more skeptical among us might tend to suggest that more fundamental to the rise was the emergence of new short-term sources of demand, specifically a 100 million rise in debit balances in November and December and heavy mutual fund purchases in December despite continuing net redemptions. This advance took the Dow up some 14 over 91 trading days, rising at an average rate of 1.82 points per day. On an historical basis this constituted a fairly normal bull-market leg, but the rate was clearly unsustainable for any protracted length of time. The emergence of the consequent down- swing should hardly, therefore, been all that surprising. In any case, by middle of last week, the Dow had returned to the upper part of the equilibrium level which had contained it for eight months last year. The clash between the demand at that level and-the selling forces which had gathered momentum since January might w-ell be expected to produce fireworks just as it, in fact, did. While all of the above may help in clarifying recent market action, it does little, we admit, to answer basic questions about the future, largely because these questions remain unresolved by market action. It is still not known if new sources of demand for equities will emerge to replace those sources which were spent on the recent rally. One potential source of such demand might, of course, be foreIgn buyers who would find devalued U. S. stocks more attractive. This source has clearly not emerged as yet, however. Residual support at present levels plus the oversold condition to which we have drawn over the past two weeks should be sufficient to hold the market at least temporarily. Its future course will be determined by the emergence or lack of emergence of new demand sources. Dow-Jones Industria's (1200 p.m.)971.10 S&P (1200 p.m.) 114.38 AWTrk ANTHONY W. TA8ELL DELAFIELD, HARVEY, TABELL No tatement or expreIQn c.F opinion or any other motter herem contolned I, or IS 10 be deemed 10 be, directly or I1ld,rectly, on offer or the sollcltotlon of on offer to buy or sell ony securlly referred to or mentioned The motler IS presenlcd merely for the convcrlencc of the subSCriber Whde we believe the sources of our mforma tlon to be reliable, we In no way represent or guarantee Ihe accuracy thereof nor of the S;Olemenls mude herein Any action to be token by the subscriber should be based on hiS own mvestlgotlon and Information Janney Montgomery Scott, Inc, as a corporation, and lIs officers or employees, may now have, or may later tOKe, poSitions or trades In respect to any securities me'1lloned In thiS or any future Issue, and such position may be different fro'TI any Views now or hereafter expreSSed In thiS or any other Inue Janney Montgomery Scott, Inc, which IS registered With Ihe SEC as on Investment adVisor, may give adVice to lIs ,nvestment adVisory and othel customers Independently of any statements mode ,n thiS or In any other Issue Further mformatlon on any security mentioned herein IS Qvollable on request