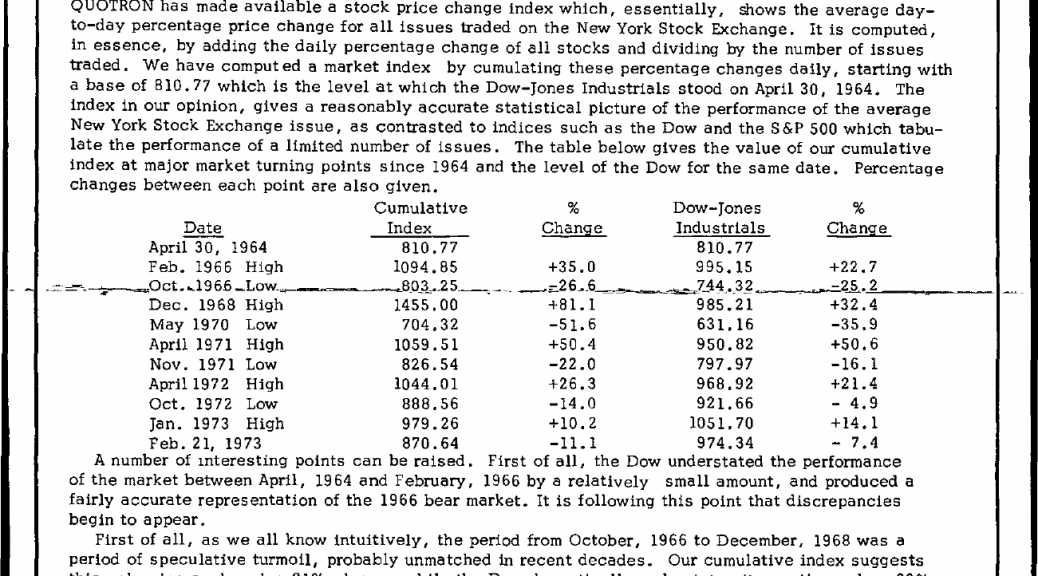 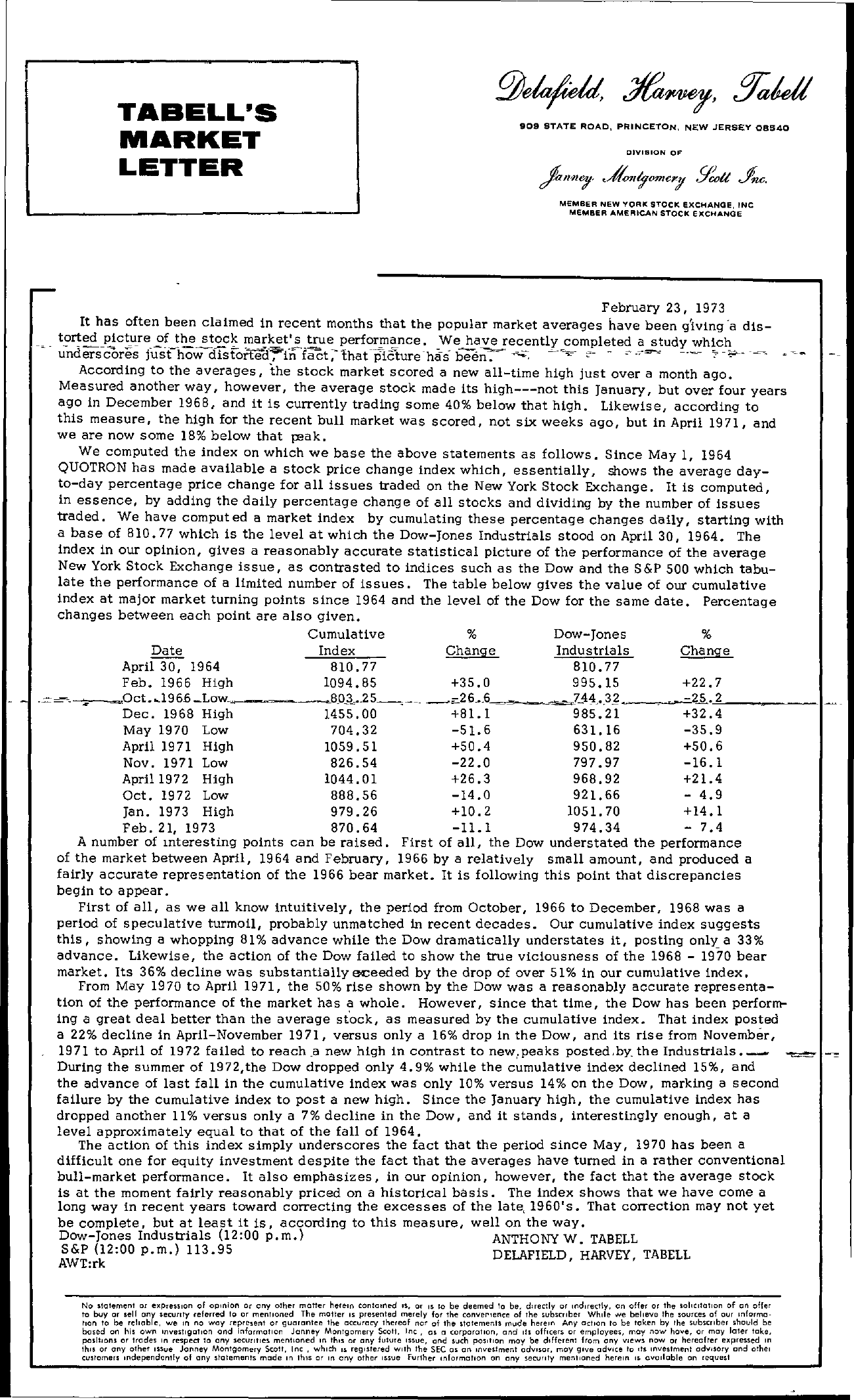 TABELL'S MARKET LETTER 909 STATE ROAD, PRINCETON, NEW JERSEY 08540 DIVISION OF MEMBER NEW YORI( STOCK eXCHANGE, INC MEMBER .6.MEAICAN STOCK EXCHANGE February 23, 1973 It has often been claimed in recent months that the popular market averages have been g'iving'a dist.rted picture of the stock market's true performance. We have recently completed a study which unders-cores jusfhowclistorte;'Cl';infact' thalpiaurehas be.;;;– – c- – . -.– c – ,…– -.- According to the averages, the stock market scored a newall-time high just over a month ago. Measured another way, however, the average stock made its high—not this January, but over four years ago in December 1968, and it is currently trading some 40 below that high. Likewise, according to this measure, the high for the recent bull market was scored, not six weeks ago, but in April 1971, and we are now some 18 below that lEak. We computed the index on which we base the above statements as follows. Since May I, 1964 QUOTRON has made available a stock price change index which, essentially, shows the average dayto-day percentage price change for all issues traded on the New York Stock Exchange. It is computed, in essence, by adding the daily percentage change of all stocks and dividing by the number of issues traded. We have comput ed a market index by cumulating these percentage changes daily, starting with a base of 810.77 which is the level at which the Dow-Jones Industrials stood on April 30, 1964. The index in our opinion, gives a reasonably accurate statistical picture of the performance of the average New York Stock Exchange issue, as contrasted to indices such as the Dow and the S&P 500 which tabulate the performance of a limited number of issues. The table below gives the value of our cumulative index at major market turning points since 1964 and the level of the Dow for the same date. Percentage changes between each pOint are also given. Date April 30, 1964 Feb. 1966 High .–Dct.196Low Dec. 1968 High May 1970 Low April 1971 High Nov. 1971 Low Aprill972 High Oct. 1972 Low Cumulative Index Change 810.77 1094.85 35.0 8.0.3-.25—- ,26..6 3 1455.00 81.1 704.32 -51.6 1059.51 50.4 826.54 -22.0 1044.01 26.3 888.56 -14.0 DOW-Jones Industrials 810.77 995.15 44. .3. 985.21 631.16 950.82 797.97 968.92 921.66 Change 22.7 —2.'2' 1 32.4 -35.9 50.6 -16.1 21.4 – 4.9 Jan. 1973 High 979.26 10.2 1051.70 14.1 Feb. 21,1973 870.64 -11.1 974.34 – 7.4 A number of mteresting points can be raised. First of all, the Dow understated the performance of the market between April, 1964 and February, 1966 by a relatively small amount, and produced a fairly accurate representation of the 1966 bear market. It is following this point that discrepancies begin to appear. First of all, as we all know intuitively, the period from October, 1966 to December, 1968 was a period of speculative turmoil, probably unmatched in recent decades. Our cumulative index suggests this, showing a whopping 81 advance while the Dow dramatically understates it, posting onl)' a 33 advance. Likewise, the action of the Dow failed to show the true viciousness of the 1968 – 1970 bear market. Its 36 decline was substantiallyeceeded by the drop of over 51 in our cumulative index. From May 1970 to April 1971, the 50 rise shown by the Dow was a reasonably accurate representa- tion of the performance of the market has a whole. However, since that time, the Dow has been perform- ing a great deal better than the average st'ock, as measured by the cumulative index. That index posted a 22 decline in April-November 1971, versus only a 16 drop in the Dow, and its rise from November, -1971 to April of 1972 failed to reach.a new high in contrast to new,peaks posted.by. the Industrials. During the summer of 1972,the Dow dropped only 4.9 while the cumulative index declined 15, and the advance of last fall in the cumulative index was only 10 versus 14 on the Dow, marking a second failure by the cumulative index to post a new high. Since the January high, the cumulative index has dropped another 11 versus only a 7 decline in the Dow, and it stands, interestingly enough, at a level approximately equal to that of the fall of 1964. The action of this index simply underscores the fact that the period since May, 1970 has been a difficult one for equity investment despite the fact that the averages have turned in a rather conventional bull-market performance. It also emphasizes, in our opinion, however, the fact that the average stock is at the moment fairly reasonably priced on a historical basis. The index shows that we have come a long way in recent years toward correcting the excesses of the late. 1960's. That correction may not yet be complete, but at least it is, according to this measure, well on the way. DOW-Jones Industrials (1200 p.m.) ANTHONY W. TABELL S&P (1200 p.m.) 113.95 AWTrk DELAFIELD HARVEY TABELL ', No ,tolement or expresSion of opinion or ony olher motter herein contolned IS, or 15 to be deemed to be, dlreC1ly or Indirectly, on offer or the SO\lcltollon of on oHer to buy or sell ony 5el;unty referred to or mentioned The molter IS presented merely for the converlenCI! of the subscriber While we believe the sources of our information to be reliable, we In no way represent or guarantee the accuracy thereof nor of the statements mude herein Any action to be token by the subscriber should be based on his own InvestigaTion and Information Janney Montgomery Scott, Inc, as ) corporation, and Its officers or employees, may now have, or may later toke, positiOns or trades In respect to any secUrities mentioned In Hlis or any fulure Issue, and such position may be different from any views now ar hereafter expressed In th or any other Issue Janney Montgomery Scoll, Inc, which IS regisTered with the SEC os on Inveslment adVisor, may gIVe adVice 10 lIs investment adVisory and othel customers Independently of any statements made In thiS lr In any other Issue Fvrther Informallon on any security mentioned herein IS available on request